22 May 2017
12th Bloggiversary
My blog is celebrating its 12th anniversary this year. This makes it one of the rare species of Neanderthal blogs that survived the rise of Homo Facebookiensis and Homo Instagramis - though I can still find some other Neanderthal blogs on my blogroll. 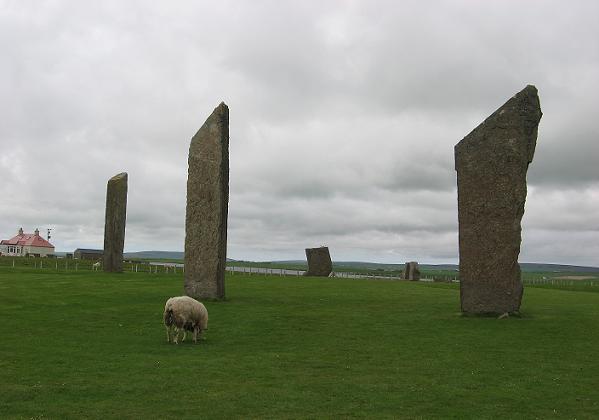 I tried to teach my layout some modern tricks of flint knapping, but it didn't work out with that odd mix of travel journal and history blog, and the comprehensive archive I've accumulated over the last 12 years. So I only merged some posts - I tended to write more but shorter posts during the first years - and decluttered and restructured the sidebar archives. 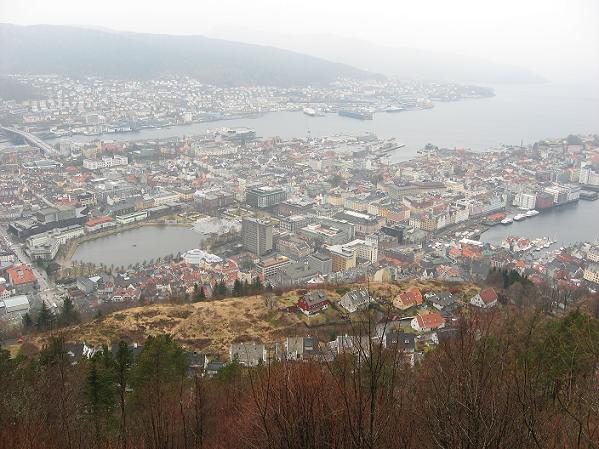 View from the Fløyen to Bergen
I've traveled a fair bit during those last 12 years, even if a lot of it took place in my native Germany. But we got plenty of beautiful nature, lots of castles and a number of charming old towns, so I haven't tired of exploring this country yet. But of course, going abroad is a lot of fun. 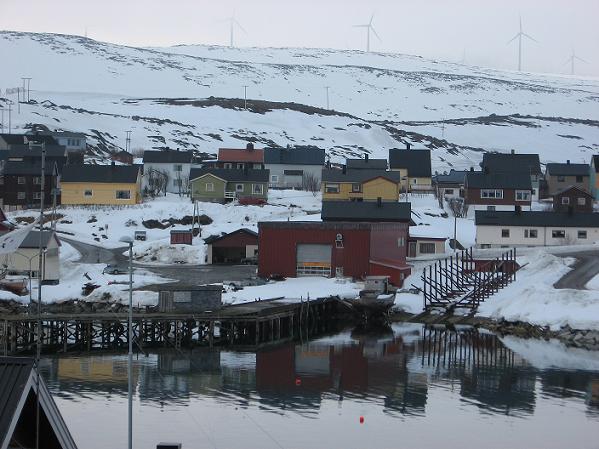 Honnigsvåg, north of the Polar Circle
One of the most memorable tours was the one I did in April 2011 when I traveled from Copenhagen via Oslo to Bergen and then took the Hurtigruten Cruise. If you like snow and want to escape the large tourist groups, a spring voyage is the best time. 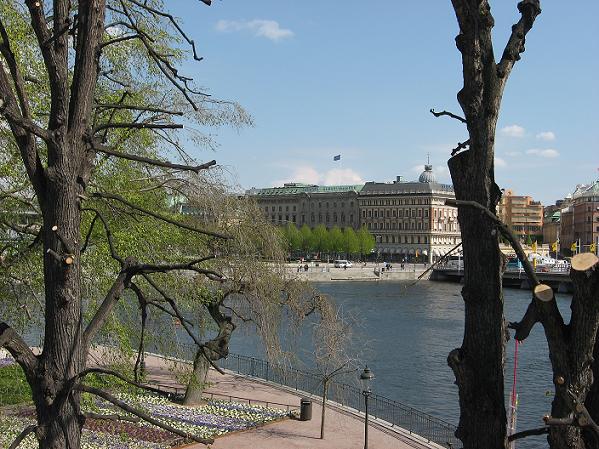 Stockholm
Another great voyage was the Baltic Sea Cruise in May 2012. The weather was perfect, warm and sunny. Returning to Stockholm where I lived for 18 months in the late 80ies was a trip back the memory lane, and St.Petersburg was just splendid. It was the time of the white nights, which made it even more beautiful. 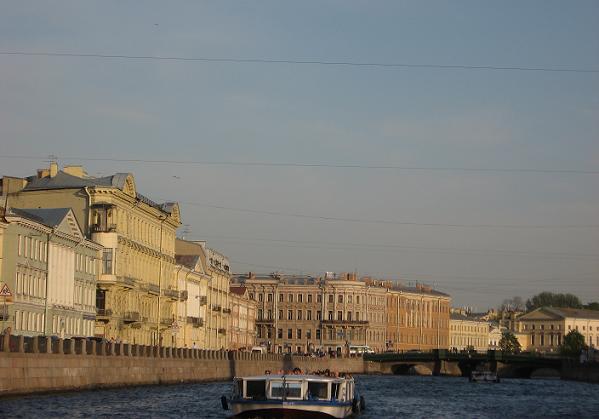 St.Petersburg in the evening sun
The UK, especially Scotland, never fail to attract me. I've been there serveral times, and the archive shows a number of posts about Scottish history and Scottish castles (or Welsh castles, for that matter). 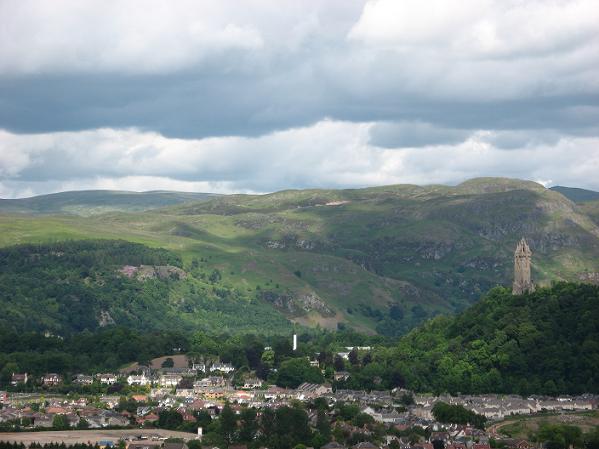 View from Stirling Castle to the Scottish Highlands
No wonder, with views like this.

So I'll keep traveling, and blogging with those old flint tools of mine, and hope my readers will continue to enjoy my little corner of the internet.
Read more! ¶ May 22, 2017 4 comments

1 May 2017
Roman and Mediaeval Vestiges in Tongeren
On my way back, I spent a day in Tongeren, a smaller town that often gets missed by tourists focussing on the Big Three, though it is well worth a visit. It is a nice place with some impressive Roman walls, a must see Roman museum, and a fine Gothic basilica. The sun decided to come back as well, so it was fun to walk around. (No boat tour this time, there are not so many canals.) 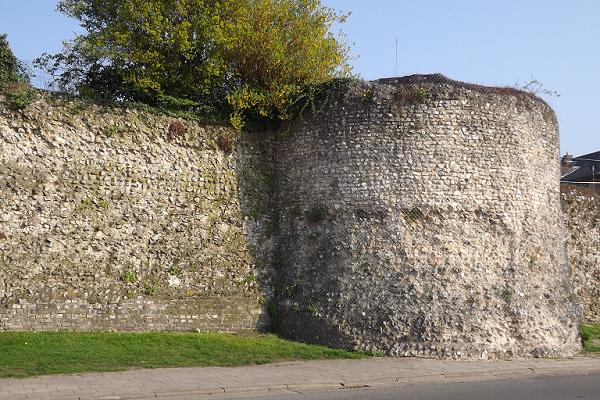 The 2nd century Roman wall
Tongeren started out as a Roman municipium called Atuatuca Tungrorum, a town situated on the crossing of several military roads. It lies futher east than the cities of Ghent, Bruges and Antwerp, at the foothills of the Ardenne mountains. But the documented history of the area goes back to this chap who defeated several of Caesar's legions in a place called Atuatuca in 54 BC. 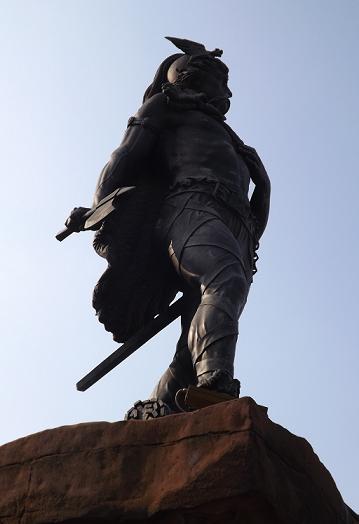 Statue of Ambiorix
Ambiorix, chieftain - sometimes also called king - of the Eburones got his own statue on the market square in Tongeren. Of course, Caesar came back with more legions and conquered the tribes of the Belgae. Ambiorix disappeared into the woods and into legend, and another tribe, the Tungri, gave its name to the settlement that soon grew near a Roman fort. 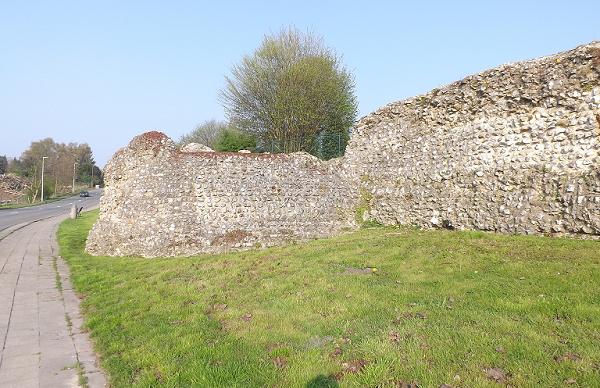 Another remaining piece of the Roman wall
Like every Roman town, Atuatuca Tungrorum got a town wall. Luckily, some parts of it survive until today, though only the inner ashley and mortar kernel remains; the outer stone blocks went into the Mediaeval town wall, the old Romanesque basilica and other places. It is still impressive, though. 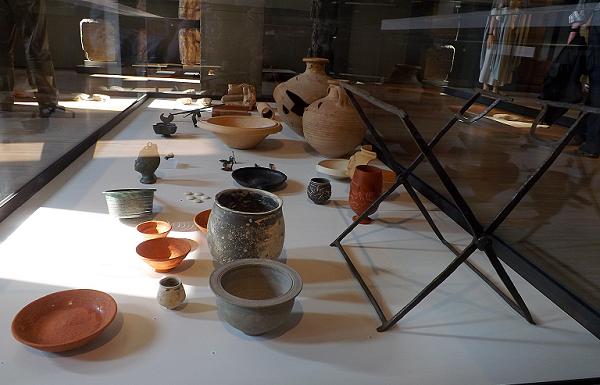 Exhibits in the Gallo-Roman Museum
Rich Gallo-Roman citizens and owners of the villae soon surrounding the town liked impressive burials. That way, lots of finds have come to light during various excavations. They are presented in the Provinciaal Gallo-Romeins Museum, together with other finds from the area all the way back to the Neanderthals. 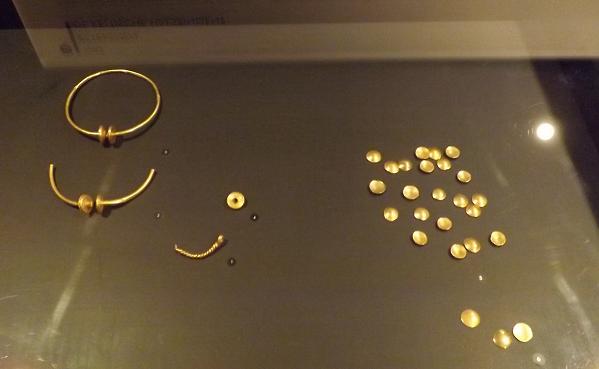 The remains of the burials have been moved into the museum, where the colours and decorations can be preserved better than on the original sites of the finds. 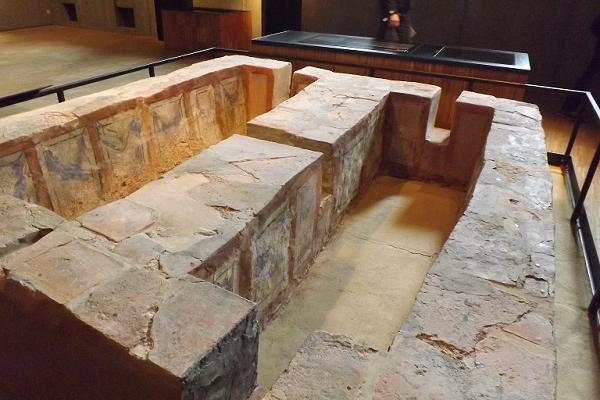 Roman tombs in the museum
The museum is located directly beside the Gothic 'Basilica of Our Dear Lady'. That church may be less spectacular than the cathedral in Antwerp or St.Bavo in Ghent, but I liked it better because the interior is unmarred by chubby Baroque angels and Rococo frills. There are also less tourists around. 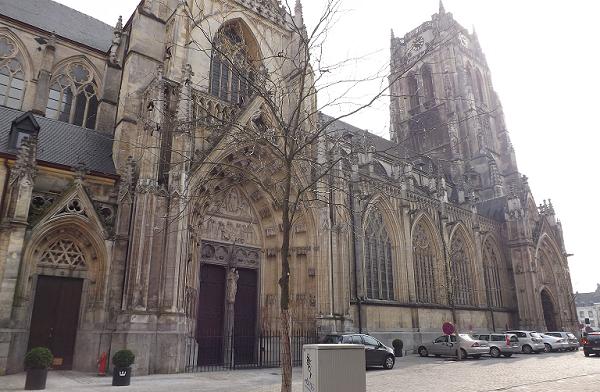 Basilica of Our Dear Lady
The basilica is based on the foundations of older churches. A cathedral chapter and monastery existed here since Carolingian times. The construction of the present three naved basilica with transept started in 1240 and took until the 16th century, thus the influence of the late Brabantian Gothic is stronger in some parts, like the main tower. 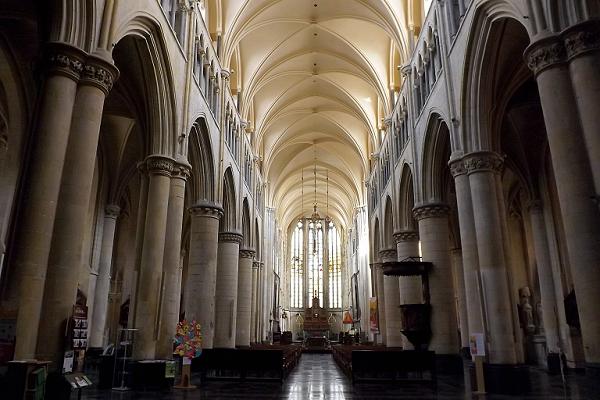 Interior of the basilica
The loveliest part is the cloister which is still Romanesque. It can be accessed via the Teseum, a museum that displays church treasures and which is located in the former chapter hall and a remaining Romanesque tower. The golden bling is fun to begin with, but it was the cloister where I spent most time, just sitting in the garden and enjoying a quiet moment. 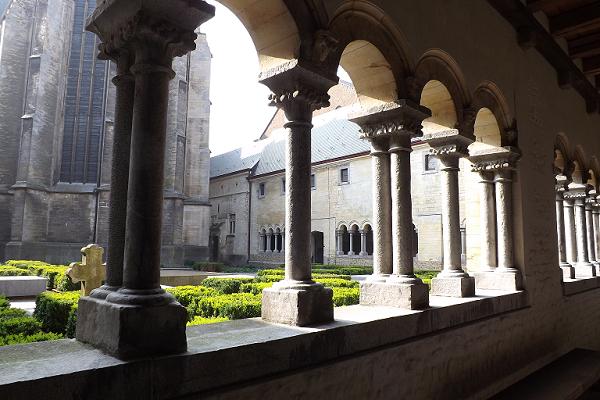 The lovely Romanesque cloister
One should take the eyes off the bling for a bit and have a look at the architecture of the chapter hall and the tower. Next year, a glass floor will show more of the foundations of the older churches that have been discovered during renovations. 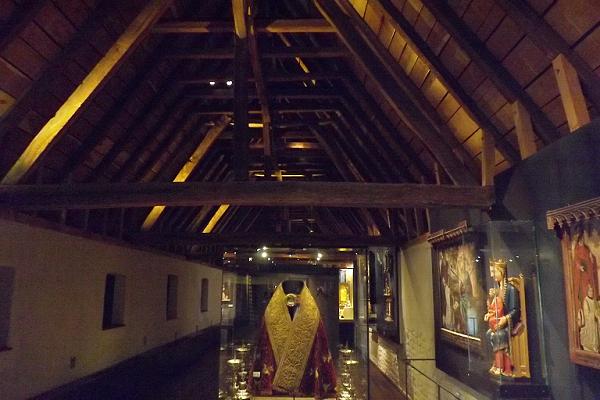 Chapter hall of the basilica
Tongeren has a béguinage as well, though it is smaller than the ones in Ghent and Bruges. There is a restaurant hiding in one of the gardens, a modern art exhibition in the chapel and some pretty vistas in the sun. Unfortunately, the little museum that shows the living conditions in one of the houses was closed. 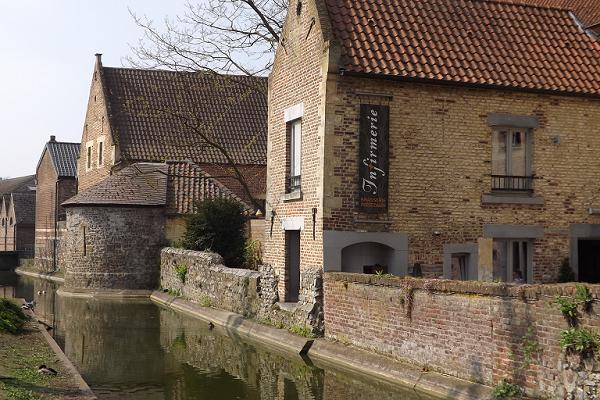 The béguinage
Tongeren once had six town gates, but only the Moerenpoort from 1379 survives. The worst setback of the town, which played a larger role in the Middle Ages than today, was the sacking by the French troops of King Louis XIV in 1677 where large parts of Tongeren were destroyed. 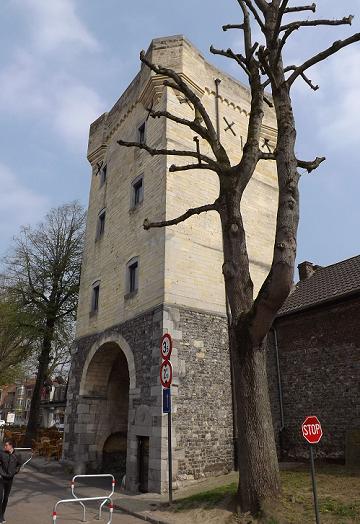 The Moerenpoort
The Mediaeval town wall was built in 1241 after an attack by Duke Hendrik of Brabant. Some of those Roman stones came quite handy for its construction. Parts of the wall luckily survived the French attack from 1677. 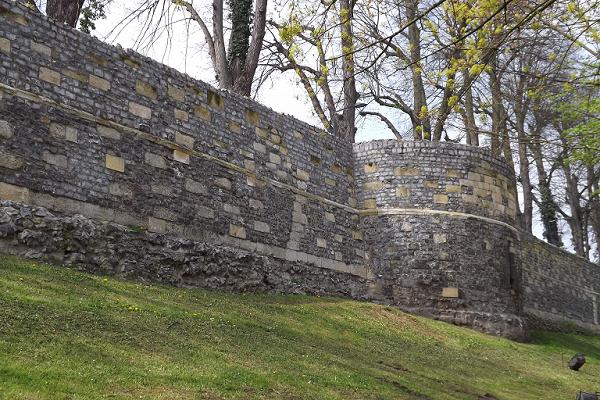 The Mediaeval town wall
Today, Tongeren is a place to see for people interested in Roman history, and worth a stop if you like Mediaeval history and architecture as well.
Read more! ¶ May 01, 2017 5 comments