15 Aug 2017
Neolithic Orkney - Life in Skara Brae
Skara Brae might look like a cozy little village at the end of the world, but it was in fact part of a net of settlements and stone settings in the area, from the Ring of Brodgar, the Stones of Stenness and the burial mound of Maes Howe to the settlement of Barnhouse and the really intriguing structures found at the Ness of Brodgar. Finds on the site also show contacts to places on the Mainland and in Ireland. 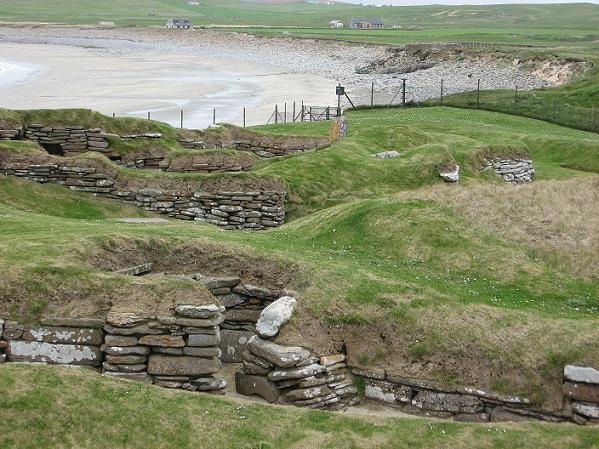 Skara Brae
5,000 years ago, Skara Brae didn't sit as closely to the coast as today. No one wants the ocean in his living room on a regular basis, after all. The sea level was lower and the settlement was therefore situated some hundred metres inland, on a gentle slope of bedrock covered by sand dunes and grass. Today, precautions have to be taken to prevent the sea from claiming the place. 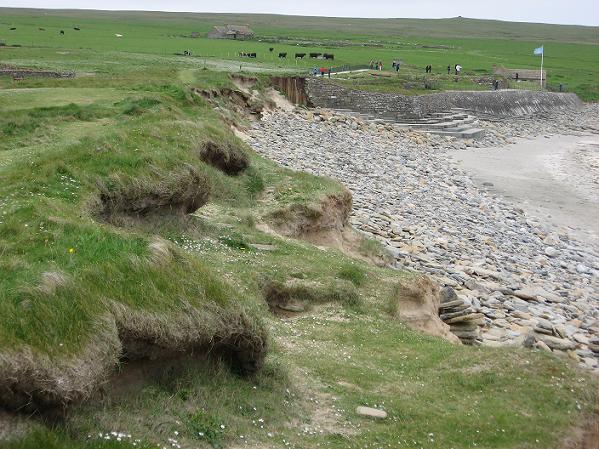 Erosion at the coast and the protective wall of Skara Brae in the background
We don't know much about life at Skara Brae and the other Neolithic settlements. Archaelolgical remains are helpful, of course, but a lot is still guesswork. Does the uniformity of the houses point at a society without a clearly distinguishable elite, or was it an elite settlement, and other members of the tribe lived elsewhere in places not yet found? The construction of sites like the Ring of Brodgar would have required a good deal of organisation and probably some sort of leadership as well. We will likely never know for sure. 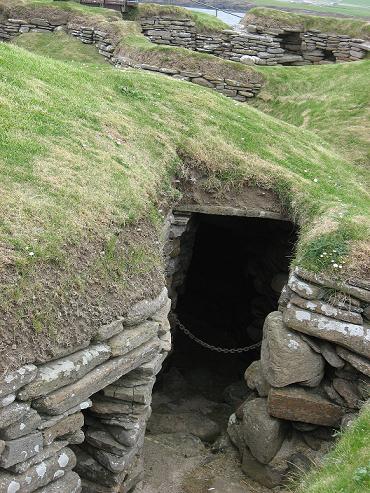 A covered passage
What we do know is that they were skilled workers of stone, walrus ivory and bone. They held cattle, sheep and pigs and thus ate meat and diary products, eked out with some barley and emmer wheat. They hunted red deer and boar, went fishing in the ocean for shellfish and cod, and gathered bird eggs. One came imagine that they would have found additional sources of food like kelp in bad times. They were probably clad in fur and leather, since no traces of working fabrics like wool have been found (like spindles or loom weights). Perhaps they knew felting techniques. 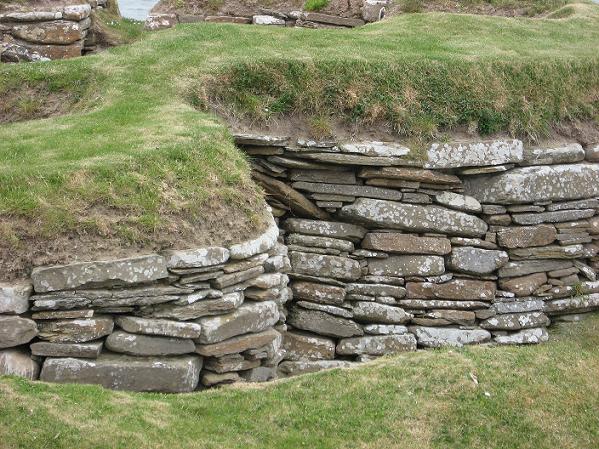 Remains of a house from the outside
The - less well preserved - village at Barnhouse had some houses of the same basic design as Skara Brae: the central hearth, the dresser, the beds to both sides, like Stone Age Ikea had a sale going on. *grins* We cannot say for sure whether that structure had a deeper meaning or just turned out to be the most practical one considering the material - local red sandstone that can easily be worked into slabs - and climatic conditions on Orkney. The slabs that framed the beds would surely allow for generous layers of dried heather, hay and furs against the cold. 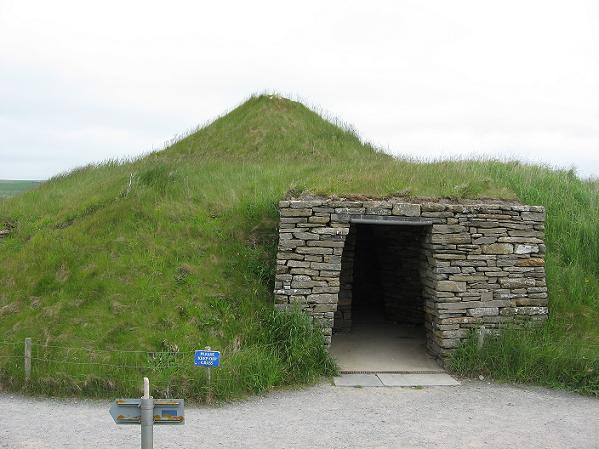 The reconstructed house
The hearth had a central place in every house, even those not following the basic pattern. The hearths in Skara Brae and other settlements were framed with stone slabs and open on top - kids likely learned early not to go too close. Hearths were the main source of light and warmth, the fire was used for cooking and other endeavours that required heat (like the pre-heating of chert, see below), its smoke would cure leather and preserve fish and meat. We don't know if there was a chimney-like hole in the roof of the houses or by whatever means it was finally released into the air. The importance of the hearth is also shown by a hearth-like structure in the Stones of Stenness. 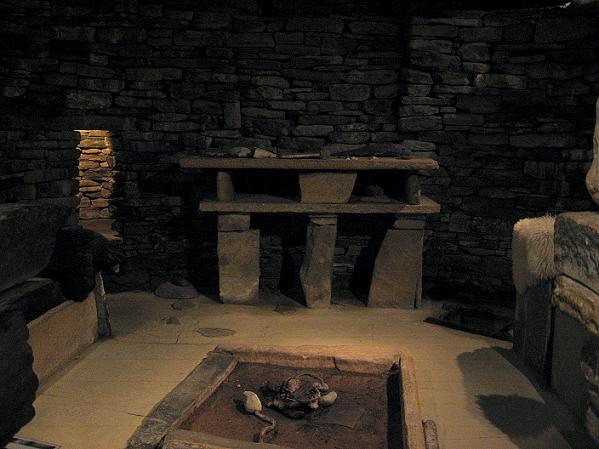 Interior of the reconstructed house, with the toilet enclosure in the left upper corner
The houses at Skara Brae were ensuite; I mentioned the toilet in the first post. This photo shows the special little corner, though there was no electric light, of course. In fact, we know little about the light sources other than the hearth fire. There may have been portable lamps filled with oil or fat, or maybe torches, but no archaeological digs have so far rendered clearly identifiable objects. 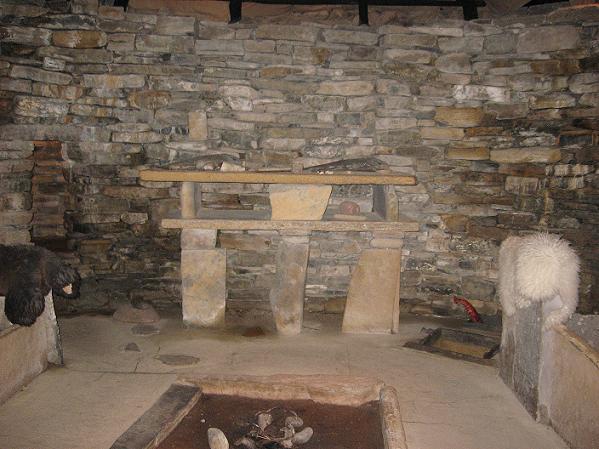 Interior of the reconstructed house at Skara Brae
I took this one with a flash to illuminate the limpet box to the right, between bed an dresser (about the limpet boxes see the first essay about Skara Brae). The dresser is a curious feature. It could have been used simply for storage, but since there is a lot of storage space in the walls and the position of the dresser opposite the entrance so prominent, it most likely held precious objects for display. 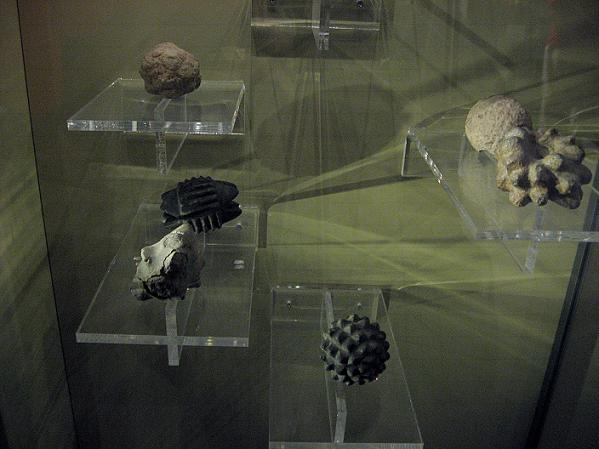 Carved stone objects
Something like this, maybe. We don't know what those objects were used for; the general assumption is that they had some religious significance which remains unknown. Religion and society remain mostly a mystery without written documents. The role of burial mounds and cairns implies that the dead, the ancestors, played a role in the religious thinking of the people, and the effort it took to built stone henges like Brodgar means those must have been important as well. 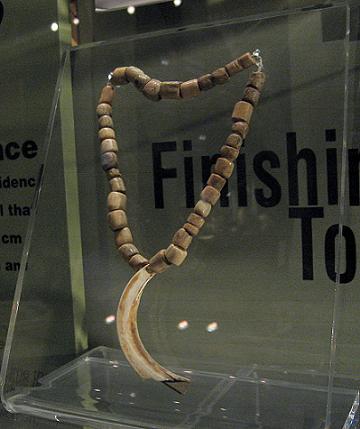 Bone pearl necklace
Or perhaps those small stone objects were just proof of the skill of the stone workers. To invest time in creating something of no practical use could indicate that the people were well enough off to be able to afford time to make decorative items, or had the means to purchase them. Jewelry like the above necklace most likely belonged in that category, except for bone pins necessary to hold clothes which also have been found at the site. Some slabs, like the bed frames, are sometimes decorated with carved butterfly designs. 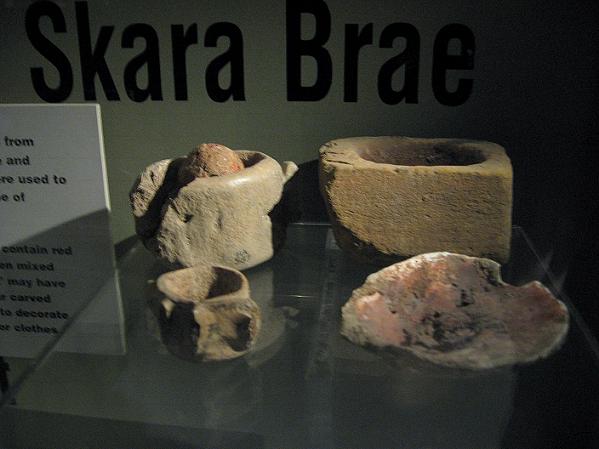 Pots and pot sherds
Stone was not only used for the houses and furniture, but for cutlery and storage vessels as well. Some jars were so large and heavy that they probably were not moved around a lot but remained in the storage niches in the walls. There may have been wooden items as well, but those decay more easily and have not yet been found.

Worked stone tools and a hammerstone
The last photo from the displays in the small museum at the site shows some of the tools: sharpened sandstone flakes known as Skaill knives, chert (a flint like stone that is best worked by prior heating in a fire) tools, and a hammerstone. The Skaill knives were the Swiss knives of the time, used for everything from cutting wood to scraping leather. 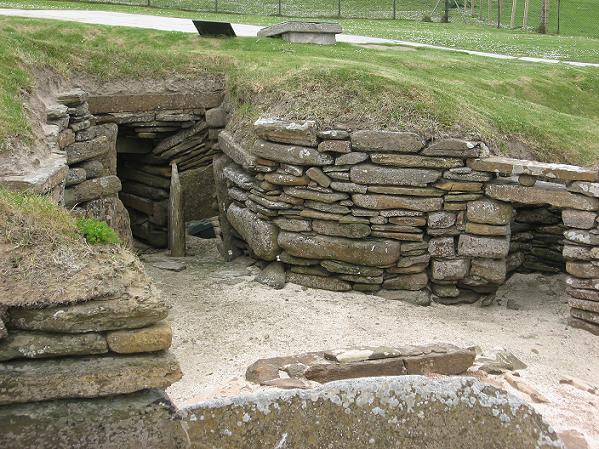 A detail shot of House 8
I've mentioned that House 8 is different from the other houses at Skara Brae and might have been a place used for work, mostly of bone and walrus ivory. The knapping of the chert probably took place on the paved area outside of the house. An open space would be better suited for that sort of work since splinters tend to fly around, and you don't want them in your food or bed furs. It doesn't become clear from the description of the guidebook if the so called 'market square' was covered like the passages, though. 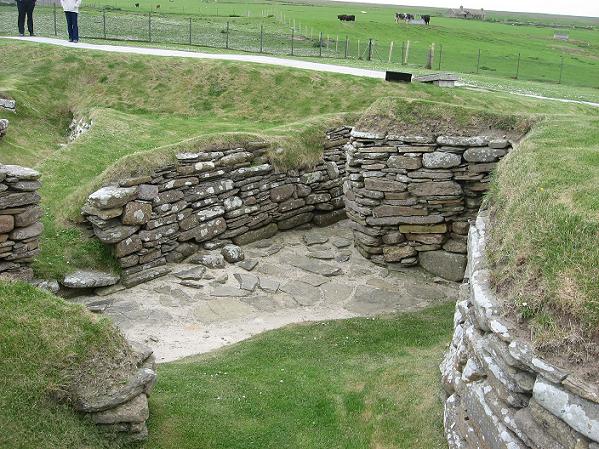 The 'market square'
Barnhouse shows a similar building outside the village proper, surrounded by a separate wall. In that case, it is assumed that it was some sort of gathering hall. Maybe the house at Skara Brae served a double function as work space and place for gatherings (since there is no other house suitable for the purpose, if not lost to the sea), though it would have been a bit small to hold all inhabitants of the village. Maybe it was only a special group who met there. 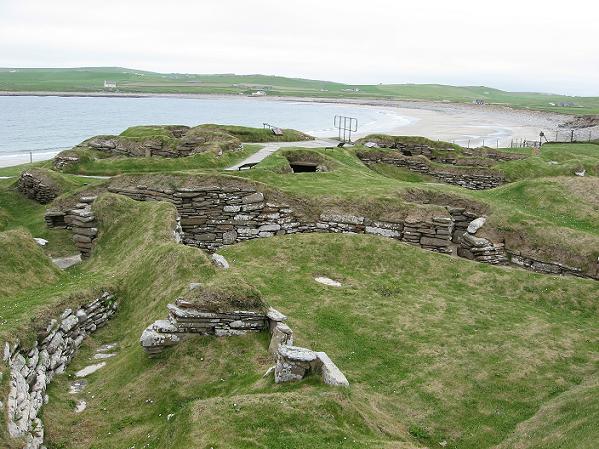 Skara Brae, seen from a different angle
Neoltihic Orkney continues to be an intriguing place. Maybe the digs at the Ness of Brodgar will help to solve some of the remaining riddles. And probably bring up new ones. *wink*