11 Feb 2018
Scarborough Castle, Part 2 - From Civil War Fortress to Tourist Attraction
Ths is the second part about the history of Scarborough Castle. After James I (James IV in Scotland) ascended the throne in 1603, there was no longer any danger of an invasion from the north, therefore King James parcelled out a number of northern English castles to private owners. Scarborough was bought by a prominent local family, the Thompsons. Since it was no longer used as fortress, the defenses were no longer kept up. 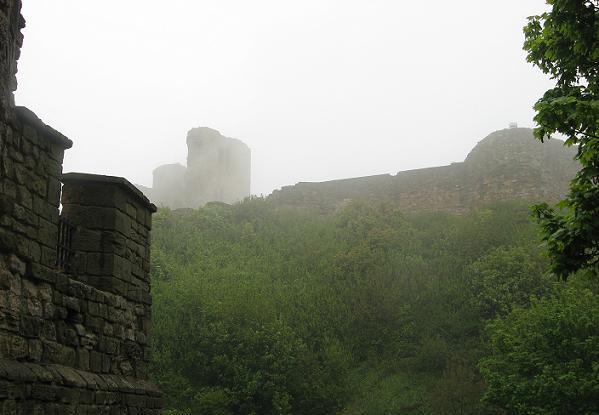 Scarborough Castle, view from the barbican to the keep in the mist

But the castle must still have been in a decent shape, because it played a role again in the Civil War (1642-1651). At the time, a local gentleman named Sir Hugh Cholmley commanded the castle (1). He had been commissioned by the Parlamentarians to raise a regiment, but eventually switched sides and defended Scarborough Castle for King Charles I after he had visited the king in York.

Hugh Cholmley repaired the fortifications and had a garrison of 700 Royalist soldiers (2) who held the castle, as well as the town and the harbour. It was the only port not under dominion of the Royalists, which made them pretty angry, especially since King Charles had his base in nearby York – not to mention the interception of the Parlamentarian supply ships. Even stout Puritans didn't like to go hungry. 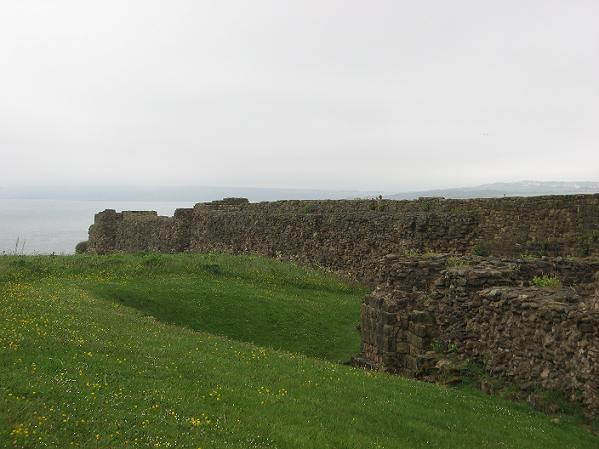 The curtain wall leading to the sally port
King Charles lost the battle of Marston Moor in 1644, a defeat that strengthened the position of the Parlamentarians. They began to roll up the Royalist strongholds in the north, and in February 1648, Sir John Meldrum laid siege to the town of Scarborough which surrendered after three weeks, thus cutting off the supply lines for the Royalists. Sir Hugh Cholmley retreated to the castle. It followed five months of one of the bloodiest sieges of the Civil War. Sir Meldrum put a whopper of a cannon nicknamed Cannon Royal (and that for a Parlamentarian weapon) onto the rock west of the castle. It was able to fire 65 pound (about 30 kg) balls. One of those partly destroyed the Norman keep.

Tthe curtain walls were damaged badly and several bloody engagements between soldiers of both sides took place. Meldrum was killed in one of these. Cholmley's garrison suffered from lack of provisions, especially food and - at the end - gunpowder as well. His men died in the fights or of scruvy, so that he finally surrendered in July 1654. 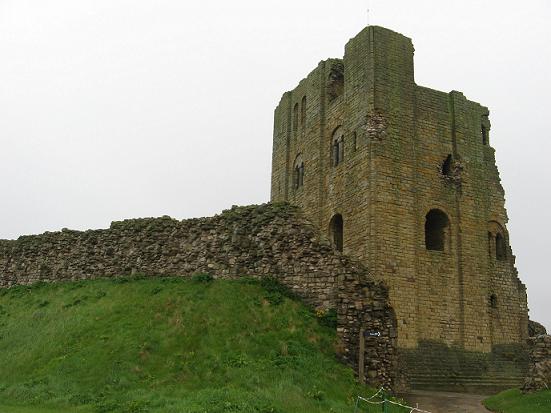 The keep which was partly destroyed during the Civil War
But this was not the end of Scarborough's role in the Civil War. The walls were repaired by the Parlamentarians who used the castle as fortress under the governor Matthew Boynton. He followed the example of Cholmley and declared for King Charles - already imprisoned at that point - in July 1648, after his soldiers went unpaid. Though how the king should have payed them is beyond me.

This time the siege lasted until December when Boynton surrendered. The castle was ordered to be slighted, but the opposition from the town prevented such a drastic measure. King Charles was beheaded on January 30th, 1649, but the war would last another two years. Upon restoration of the monarchy in 1660, Scarborough Castle was returned to the Crown 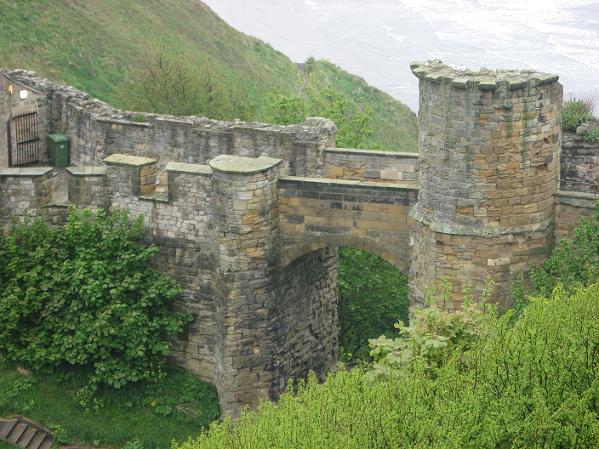 The bridge between barbican and castle
The castle served as prison in the following years. One of the most famous prisoners was George Fox (1624-1691), founder of the 'Religious Society of Friends', today known as Quakers. He and his followers said that God was everywhere and anyone could preach, so an established church was not neccesary. They also would not take up arms or swear oaths. Small wonder that Fox made enemies among the authorities and was imprisoned several times (the time in Scarborough lasted from April 1665 to September 1666; his quarter was - according to his letters - cold and wet). Cromwell met with Fox in person and they got along rather well, but the Parliament under Charles II forbade the Quaker meetings and had many of them arrested. Fox spent several years traveling in the colonies, especially America. At his death, his religious movement had been firmly established despite all adversary (3). 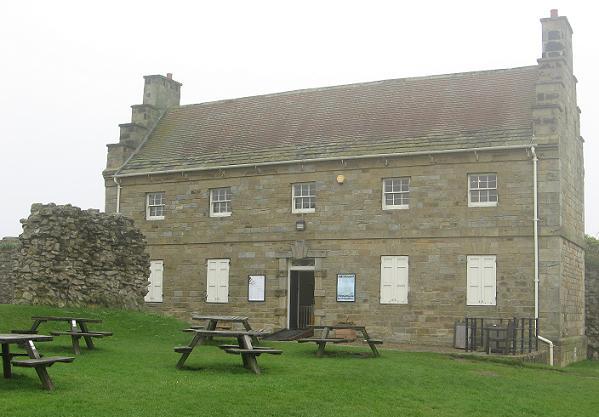 The 18th century Master Gunner's House
The castle declined in the years to follows. During the last Jacobite Rising of 1754/46 - one of the attempts to regain the British throne for the Catholic Stuarts - some repair was made to the walls by the Hanoverian government, including the addition of three gun batteries. Barracks were constructed inside the remains of King John's Chambers. These would be in use into the mid-19th century. The Master Gunner's House was built at that time as well; the remains of the keep were used as powder magazine. But the castle saw no action during the Rising.

The castle was garrisoned again during the Napoleonic Wars to prevent a French landing in England. 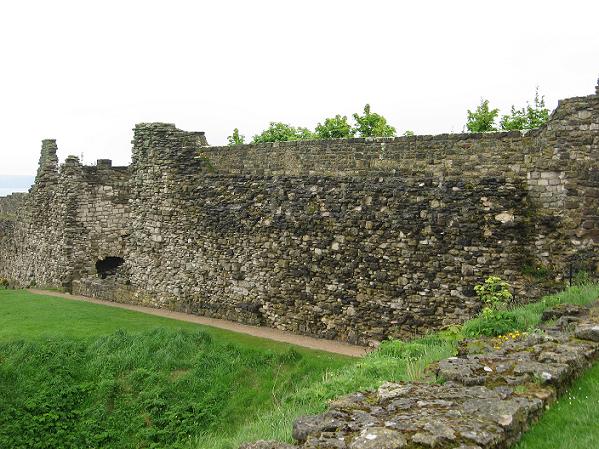 Another angle of the curtain walls
In December 1916, Scarborough was attacked by two German warships, Derfflinger and Von der Tann, that fired some 500 shells into town and castle. 17 civilians were killed and more than 80 wounded. The castle keep and the barracks were damaged; the latter so badly that they were dismantled. The bombardment shocked the British public. 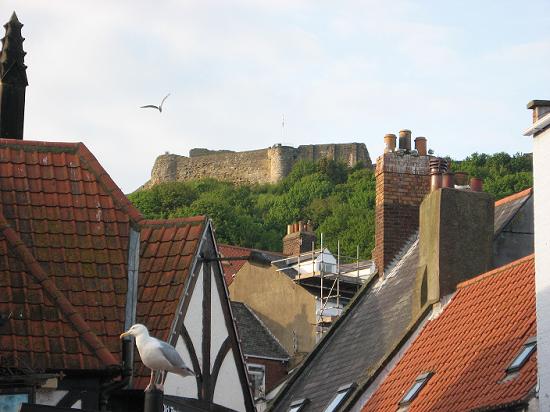 In 1920 the castle came into the guardianship of the Ministry of Works. As the damanged barracks were dismantled, the remains of King John's Chambers were discovered, as well as the remains of the Roman signal station further seaward on the plateau. English Heritage took over the care for the castle in 1984.

Scarborough Castle is said to be haunted by three ghosts, no less, among them a Roman soldier. But despite the fog and the suitably spooky atmosphere, I didn't meet any of those. 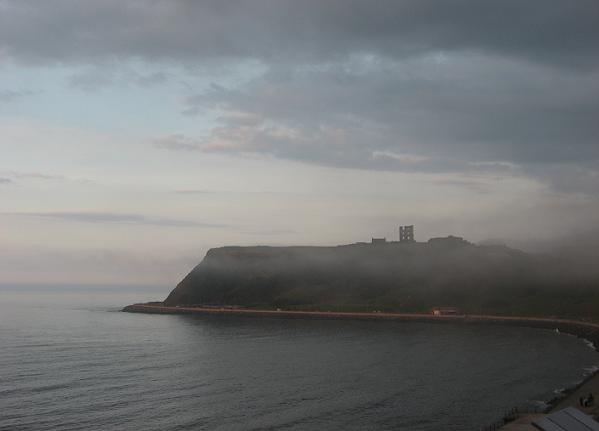 Scarborough Castle veiled by the incoming evening fog
Footnotes
1) I could not find out what happened to the Thompson family who had bought the castle in 1603.
2) They had been raised to support the Parlamentarians, but only few left after Cholmley changed sides, though they were allowed to do so.
3) This is a very simplified summary of Fox's life, of course, and I admit that I know little about the details of the Quaker religion.