22 Jul 2018
"Palaces adorn its every shore" - The Villa Urbana in Longuich at the Moselle
Where the blueish stream expands, behold the multitude
Of villae, proudly gabled, leaning against the rocks,
And as the river wanders in a meand'ring course,
Palaces alternately adorn its every shore. 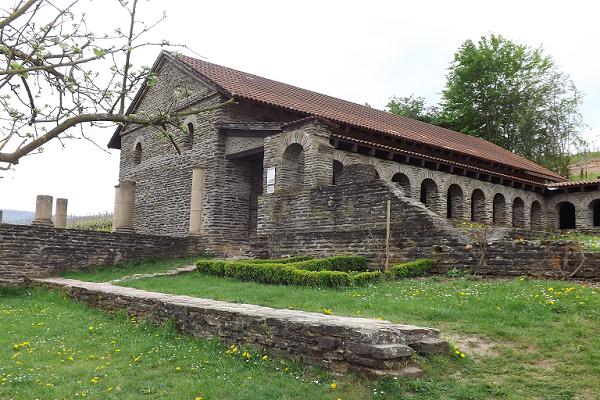 The villa urbana in Longuich, east wing
One of those palaces (praetoriae) praised in the poem is the Roman villa near Longuich at the Moselle. The reconstructed east wing shows only a part of the entire villa as Ausonius would have beheld it, but it is still a pretty example of Roman country estate architecture. The villa is situated on a terrace halfway up the vineyard hills framing the Moselle, with a fine view over the valley and river. 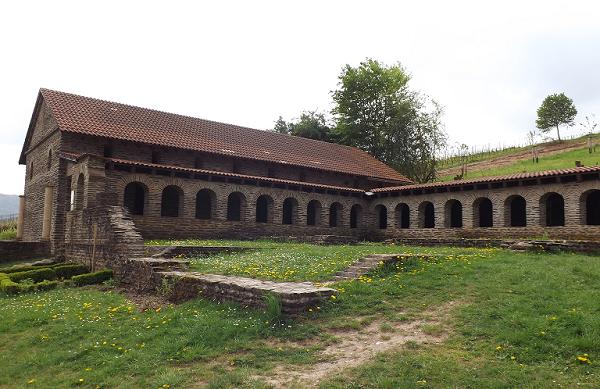 Villa in Longuich, east wing and connecting passage
The land around the Moselle (including most of present day's Luxembourg and western Belgium) was the territory of the Treveri, a tribe of the Belgae, a Celtic speaking people of mixed Celtic-German origins. Part of the tribe joined the Gallic revolt against Caesar under their chief Indutiomarus and, after Indutiomarus' death, sided with Ambiorix. Others stood with his pro-Roman son Cingetorix whom Caesar later appointed king. The territory became part of the province of Gallia Belgica after Caesar's conquest of Gaul in 50 BC. 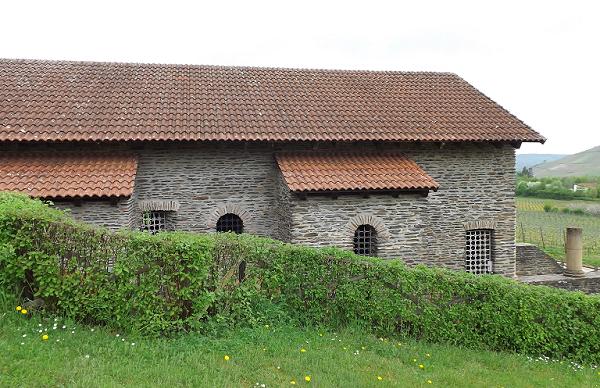 East wing, the outside facing wall
The original oppidum of the Treveri on the Titelberg (now southern Luxembourg) was replaced by Augusta Treverorum aka Trier during the reign of Augustus and made into the new capital of the Province probably about BC 17 (2). A class of wealthy officials who could afford a country estate soon developed, and there was the - increasingly Romanized - local nobility who could afford a posh lifestyle. 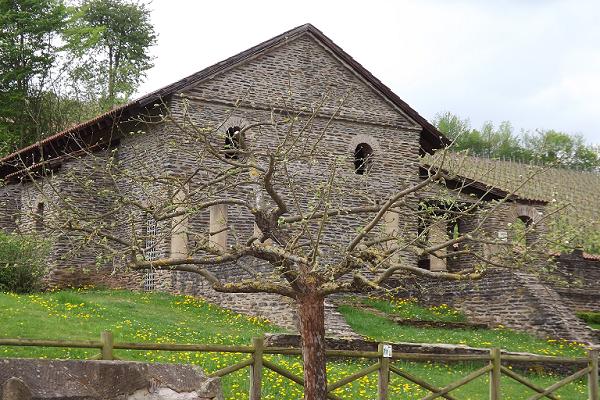 East wing with vineyards in the background
The first villa on the site, dating to the early 2nd century AD, was a villa rustica, basically a large style farm with a country house where the owner spent some quality time with his family when not working in Trier. Those farms were usually run by a steward and provided agricultural produced for the towns and military settlements. The Roman estates usually were rather large, but there must have been a lot of smaller farms mostly owned by locals and maybe veterans as well (3). 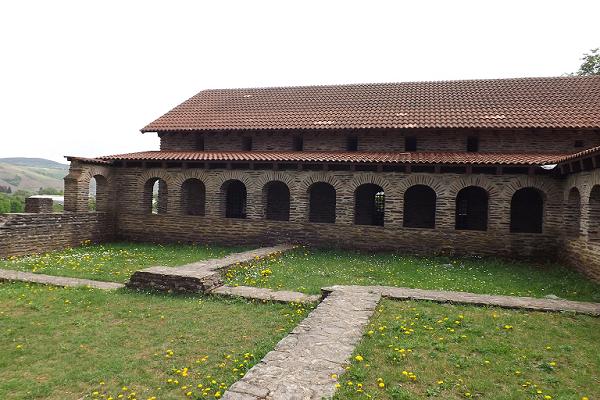 Another view of the east wing
The villa whose remains we can see today was built in the later 2nd century AD and can be classified as villa urbana, a country estate with a representative main building, the pars urbana, separated from the actual farm buildings by a wall. Those villae were built by retired Roman officials and maybe local nobles with enough money who fancied the Roman luxuries. It is often difficult to tell who the owner of the many remains dotting the Moselle valley was. They didn't leave behind their doorplates. 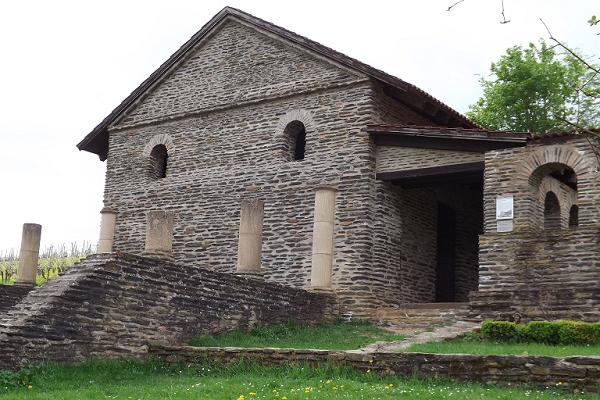 Remains of columns outside the east wing
The remains of the villa in Longuich were discovered in 1984. The main building, or rather, set of buildings around several inner yards, measured 110x28 metres. The former smaller building had been deconstructed when the new 'palace' was erected. The east wing and the connecting passage are only a part (4) of the entire layout which included a great house and a west wing, all connected by passages. Both wings had pillared avant-corpses - you can see remains of the pillars on the photo above. 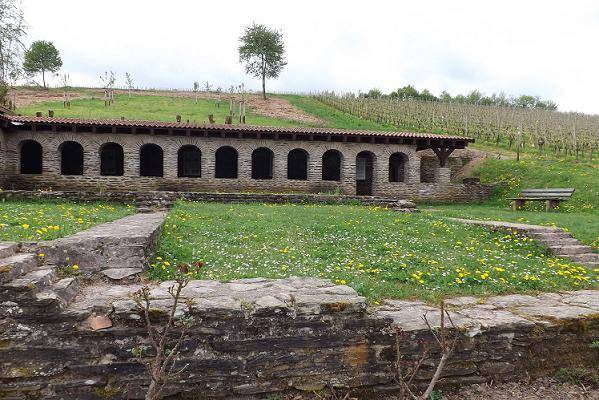 Covered passage with foundations of other domestic buildings in the foreground
The actual farm or pars rustica stretched down the hill toward the Moselle where the village of Longuich is now located. Foundations of several farm buildings have been found, but were mostly covered up again. The situation of the villa at a road leading to Trier and not far from the Moselle made it easy to transport the goods to the capital, and traveling would not take much time for the owner, either (it's about 15 minutes by bus). 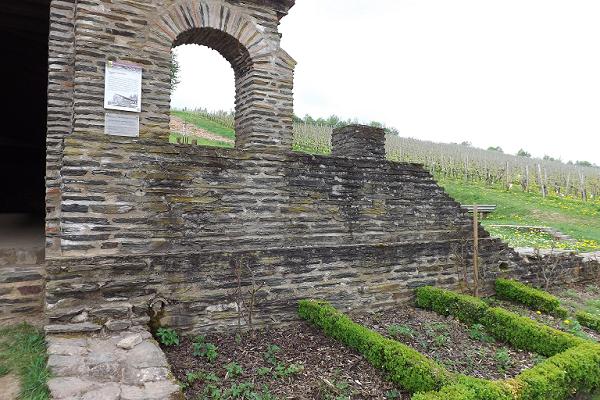 Garden in one of the inner yards
The east wing contained the baths, and those have been reconstructed. There is no direct access, but I managed to take some photos through the grilles in the doors to the various rooms. So here is a bathing series: 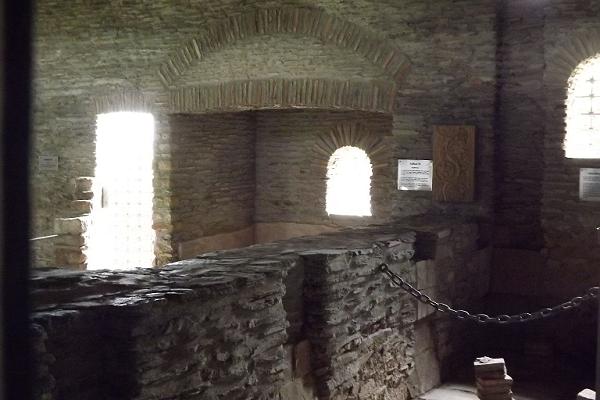 The cold bath
We start with the cold bath or frigidarium. You can see a hint of the bathtub proper in the niche to the left. The room in the foreground was the toilet. 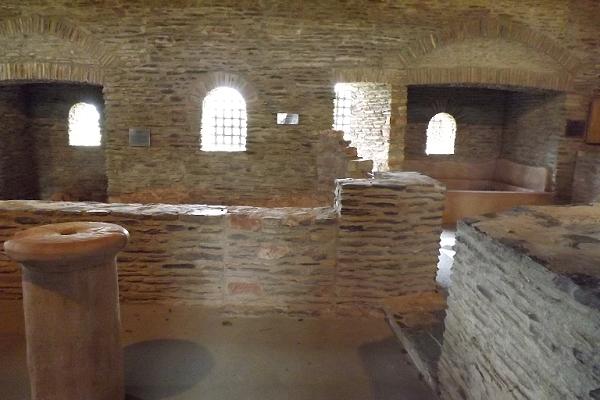 The hot bath with anteroom
The next room is the hot bath, the caldarium. The tub is in the corner to the right; in the foreground is an anteroom which may have been used for massages, rest and such. 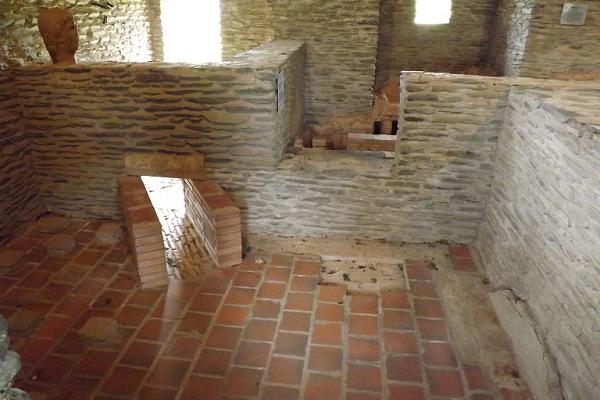 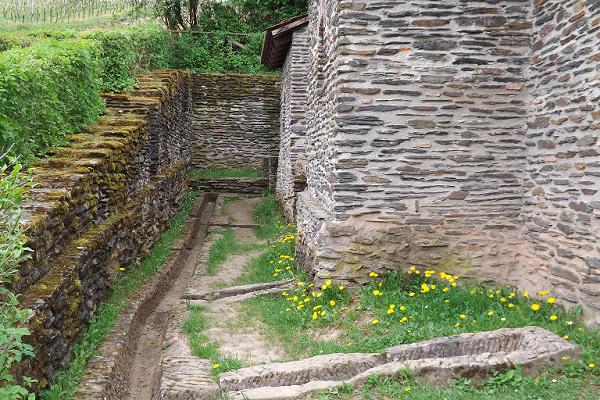 The sewer pipe outside the east wing
The dirty water was drained to the outside, as you can see here. What remains is only the brick-built encasement (minus the cover) of the pipe which would have been a proper lead pipe. I could not find any information where the sewer finally led; maybe to the fields and vineyards. 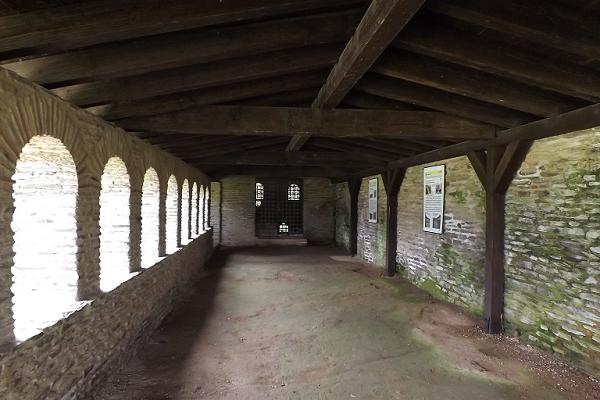 Interior of the passage
The baths were decorated with a fine mosaic floor and frescoes. A few traces of those remain and have been placed in the original spots during the reconstruction, but it was impossible to get any clear photo in the dim light, using a zoom to catch an impression of the rooms in the first place. 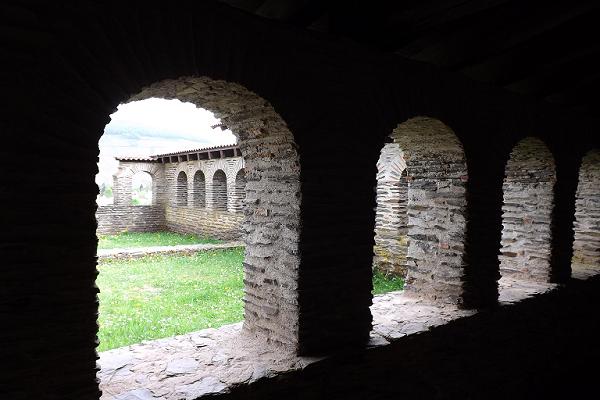 View out of the passage
The villa was in use until some time in the 4th century. Some of its pillars and stones found their way into the church of Longuich during the Middle Ages, and probably other houses that no longer exist. Roman remains almost always served as quarries. 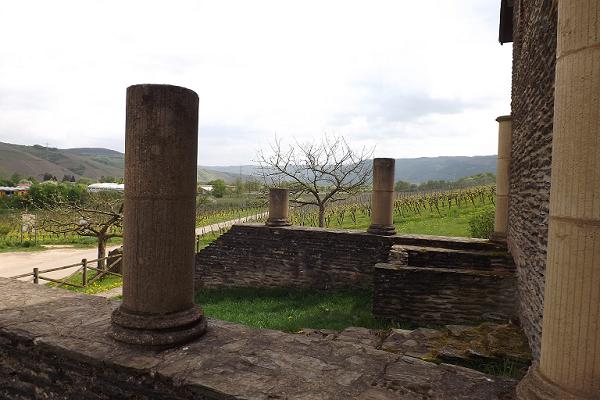 Pretty view from the porticus of the east wing
Footnotes
1) The original Latin text:
Talia despectant longo per caerula tractu
Pendentes saxis instanti culmine villae
Quas medius dirimit sinuosis flexibus errans
Amnis, et alternas comunt praetoria ripas.
2) The original capital of Gallia Belgica had been Durocortum Remorum = Reims.
3) The latter would have been more common along the the Rhine where the legionary and auxiliary forts were located, not along the Moselle.
4) I'd say about a third, judging from a sketch of the entire front on the leaflet provided by the tourist office.