7 Feb 2021
A Treasure in the Evening Twilight – The Romanesque Church in Gehrden / Brakel
This one was a chance find. My father and I returned from a longer tour, hit a diversion route which confused the GPS until I got out the good old road map and brought us back on track. We drove through several villages west of the Weser river in the fading light of an autumn evening and came across this beauty. 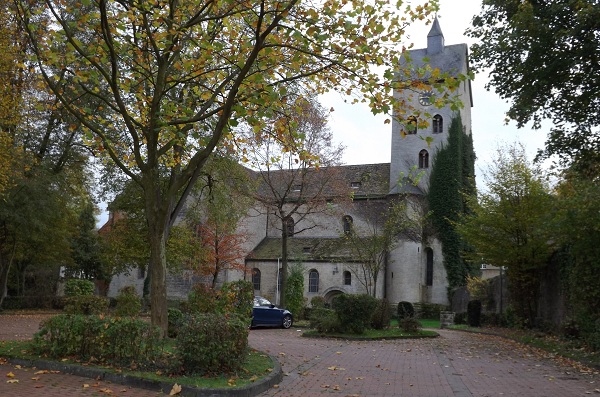 View to the St.Peter and Paul Church in Gehrden

The chapter church St.Peter and Paul in Gehrden / Brakel near Höxter at the Weser dates back to the 12th century, though the Romanesque apse has been replaced with a larger rectangular choir in the 17th century, and the interior is Baroque, which may be the reason that it is less well known than the Weser abbeys of Bursfelde and Lippoldsberg which were built at the same time and retained their architecture unaltered. 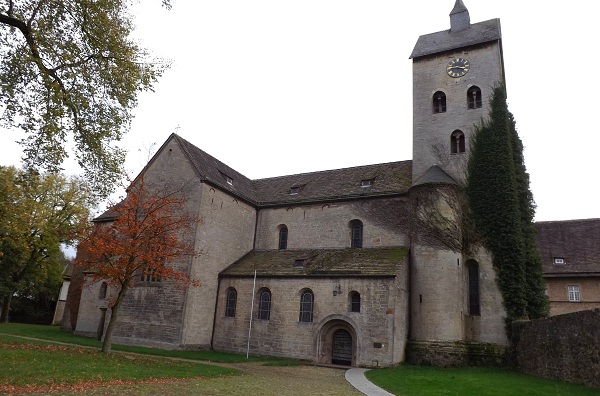 The Romanesque St.Peter and Paul Church in Gehrden

We don't know much about the early history of the church. A date confirmed is the gift of land and obviously some material goods as well, which the Lord Heinrich of Gehrden made to the Benedictine nuns who lived on the Iburg. The foundation of the monastery was sanctioned by Bishop Bernhard I of Oesede, and in 1142, the nuns moved into the new monastery.

The monastery flourished in the centuries to come; in 1474 it joined the Congregation of Bursfelde, a congregation of west- and central German benedictine monasteries of both genders who reformed the somewhat diluted Benedictine practice. The congregation became a considerable political power in the 15th-16th centuries. 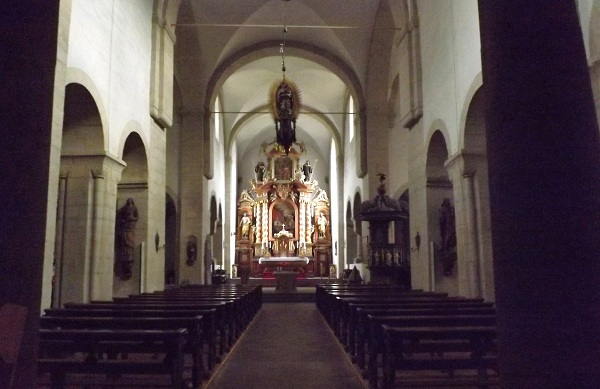 Interior, view to the Baroque altar

The monastery got a Baroque makeover between 1693- 1711 (for alterations in the architecture of the church see below). The monastery was secularised in 1810 and came into possession of Jérome, one of Napoleon's brothers, who sold it to his Master of Ceremony, Count Wilhelm of Bocholz. Bocholz had the cloister and living quarters dismantled and built a three winged palace in the classicistic style in its place, together with a park. Today, the palace buildings are used as hotel. 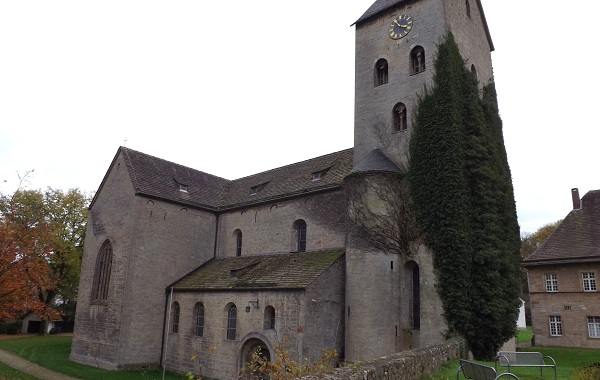 The church seen from a different angle

The church was built about 1180 which means that the nuns must have used another church during the years between their arrival and the completion of the present building; probably some village church now lost, or an interim timber building.

The building was constructed with irregular ashlars of locally quarried limestone. It is a three naved basilica with a transept; the side naves are half the height and width of the main nave. The ceiling is constructed of groined vaults. Originally, all three naves ended in a semicircular apse; but today only the ones of the side naves remain.

The pillars are in the Lower Saxon style, rectangular with small round columns in the corners that share the plinth, but got each their own, individual capital. 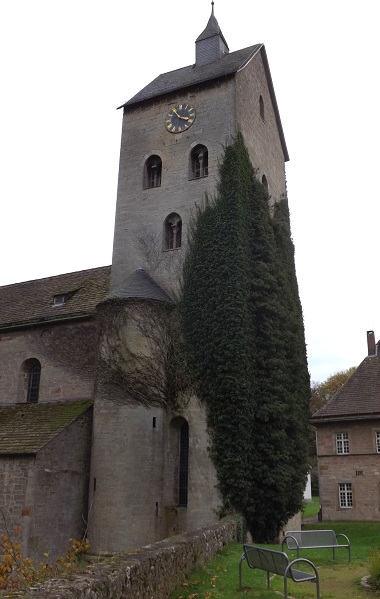 The western tower was added in the beginning of the 13th century, some 50 years after the church itself. The stapled gable and the windows already show elements of the Gothic style. 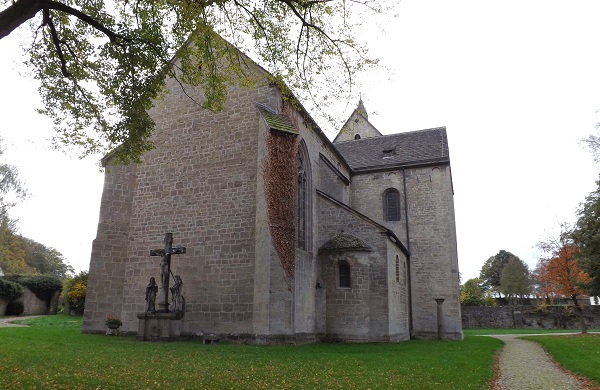 The church from the east, with the the new choir

The Romanesque apse of the main nave was broken down and replaced with a rectangular, much larger choir in 1667. A gallery for the nuns was added in 1675 (now the organ loft) – obviously the church was not only used by the nuns but also by the inhabitants of Gehrden at the time, so that a separation proved neccesary. There was a direct connection between the gallery and the nuns' dormitory.

The choir windows and those of the transept have been replaced with larger windows with a pseudo-Gothic tracery, to allow more light to illuminate the Baroque altar. 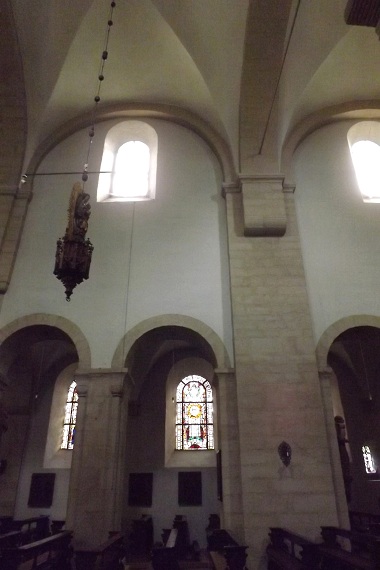 Detail of the interior

The coloured windows in the side nave date to 1920; at the time the church underwent some repairs like stabilisation of the vaults and some of the pillars.

In the 1960ies, remains of Romanesque frescoes have been discovered, but those are mostly hiding behind the organ; and it was too dark to look for them anyway. 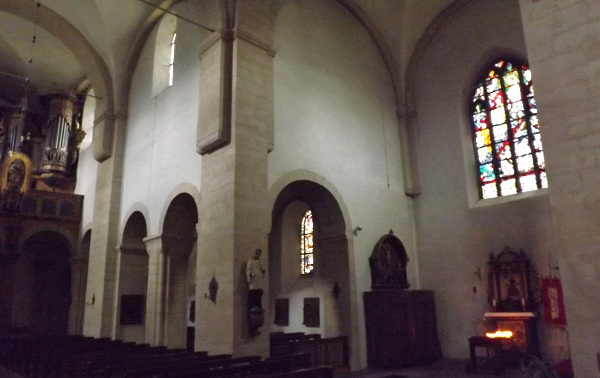 The church must have had problems with groundwater at some point. During a renovation in the 1950ies it turned out that the floor had been filled up with debris up to 70 centimetres (though I could not find out at which time during the church's history) so that the plinths of the pillars were no longer visible. The rubble has been removed, which also improved the acoustics of the church – those Mediaeval masons knew what they did even in that respect. 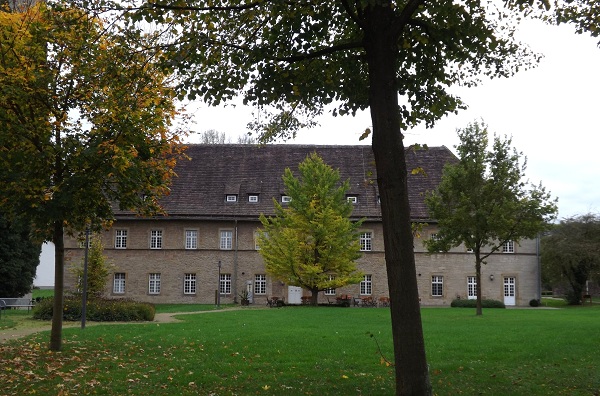 One of the classicistic palace buildings

The area around the church and the palace – the former cloister, refectory, dormitory etc. – once had been a garden for vegetables and herbs, including an orchard and a bleach green, as well as a fish pond; fish being an important part of the nuns' diet.

Count Wilhelm of Bocholz turned the site into a park in the English style in the early 19th century. This park still exists. 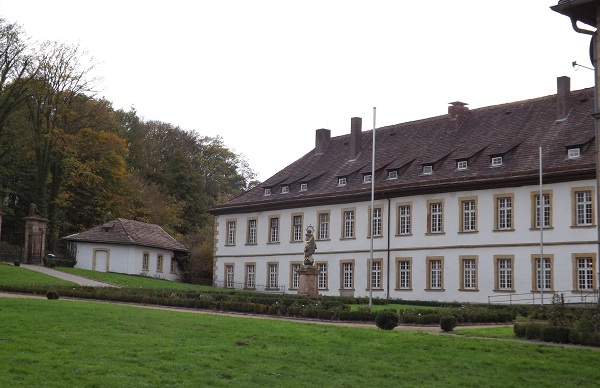 Another palace wing, now a hotel

We came home after dark and pretty hungry, but that detour was worth it.
Read more! ¶ February 07, 2021 3 comments