6 Aug 2021
The Night the Devil Got Angry – The Teufelsmauer in the Harz Foothills
Once upon a time, god and the devil decided to divide the world between them. The devil should get all the land he could wall in during one night. So the devil set off from the north and all went nicely at first. But an old woman was walking down the Harz mountains with a cock she wanted to sell at the market. Since the way was long, she had started off in the middle of the night. She stumbled in the darkness, and the cock awoke and let off a merry cock-a-doodle-doo. The devil thought dawn was approaching and, taken with ire, he smote the wall he had built. 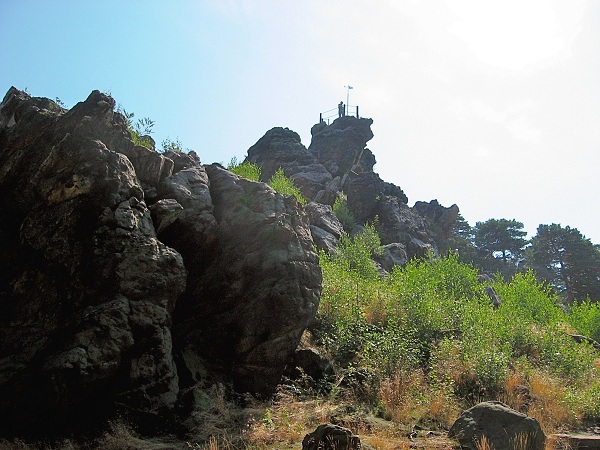 The Devil's Wall near Blankenburg

Parts of the cracked wall – known as Devil's Wall (Teufelsmauer) – can still be seen between Ballenstedt, from where it runs for about 20 km in north-western direction to Weddersleben (near Quedlinburg) and Blankenburg. Geologically, the formation stretches all the way to Goslar where it reappears as the Klus Rock. 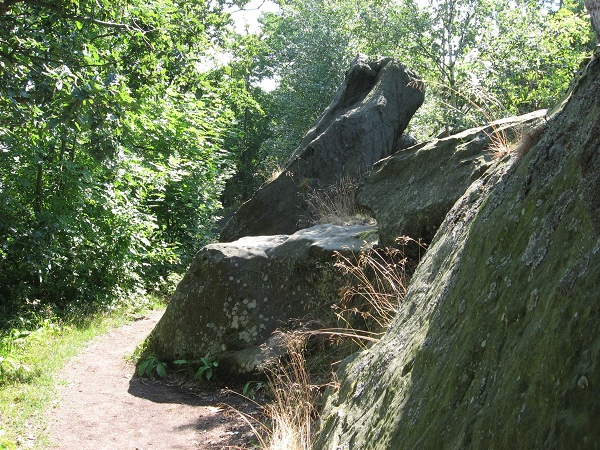 Way at the rock formation near Blankenburg

The poor devil has been blamed for a number of geological features that stand out in the surrounding landscape. The mountains of the Harz give way to the Northern German Plain in the north, so the Devil's Wall is a singular chain of rocks beyond the last hills, looking like the remains of a giant wall indeed. 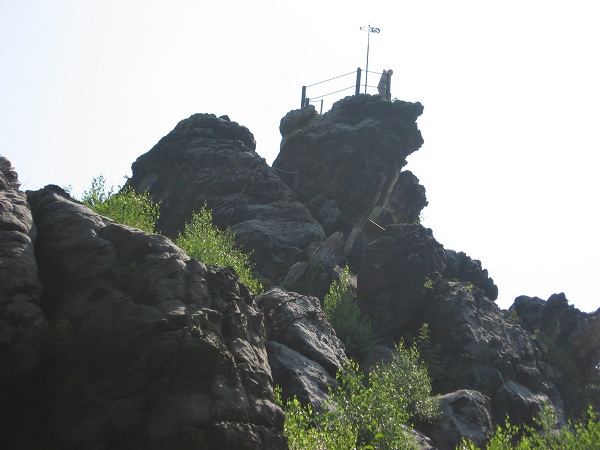 The highest rock in the formation is the Grandfather Rock (Großvaterfelsen; 317 metres) near Blankenburg. Other interesting rocks appear at Weddersleben (like the King's Rock). The rock formations shown in the photos of this post are in the area near Blankenburg. 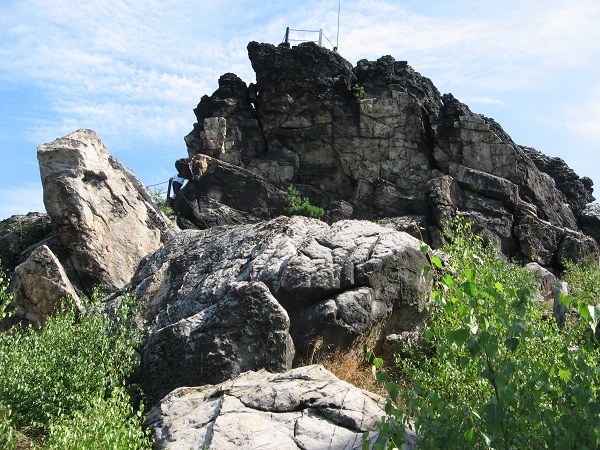 Parts of the Devil's Wall were put under protection to prevent further mining of the sandstone as early as 1833, the part at Weddersleben is a nature reserve since 1935; 2006 the entire Devil's Wall was added to the list of National Geotopes. 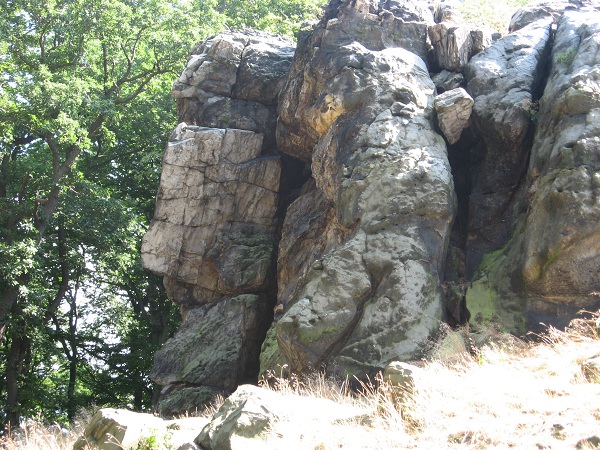 More rocks of the wall near Blankenburg

The rock formations of the Devil's Wall are sandstones from various strata of the Cretaceous. The limestone from the Upper Cretaceous is intercalcated by hard Neocomian sandstone, for example. Quartizitation by ingress of silicic acid also hardened the sandstone. The various layers often alternate within a few metres. 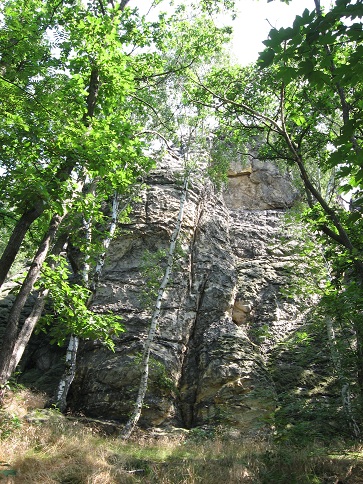 The sandstone was originally the bottom of a shallow sea, and the strata thus horizontally layered. When the Harz mountains rose during the Saxon Orogeny, the lithologic sequence of rocks have been brought to the surface in a vertical or semi-vertical position (about the geology of the northern Harz see also this post and the one linked above). 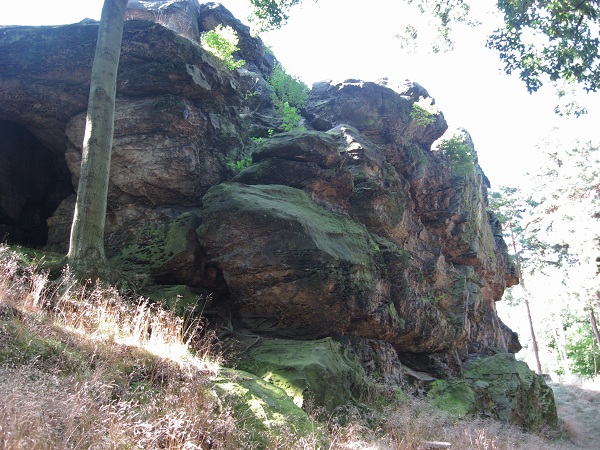 The folding of the layers was not a smooth process, but took place at different times in different parts along the northern Harz Boundary Fault line, which led to a discordant overlapping of the the older Triassic buntsandstein, musselkalk and keuper as well as the younger Cretaceous sandstone. 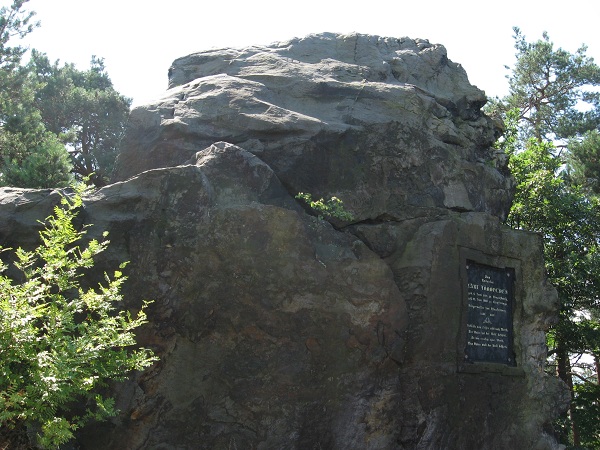 Erosion and the glaciers of the Ice Ages eliminated the softer rocks, leaving the harder parts that now stand out as crags and pinnacles. The river Bode also changed its course during the glacial periods, washing out a new bed. As a result, the Devil's Wall, marker of the boundary fault, today shows some gaps between the rock formations. 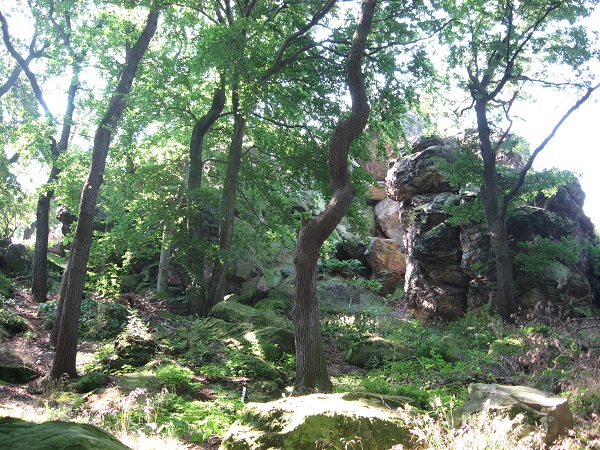 The elements of the Devil's Wall are of different age. The formation at Weddersleben is younger than the rocks near Ballenstedt which are a silificied sandstone and – in case of the Grandfather Rock – quarzitic sandstone, for example (I'll spare you a list of names of geological subformations of the Cretaceous period represented here). 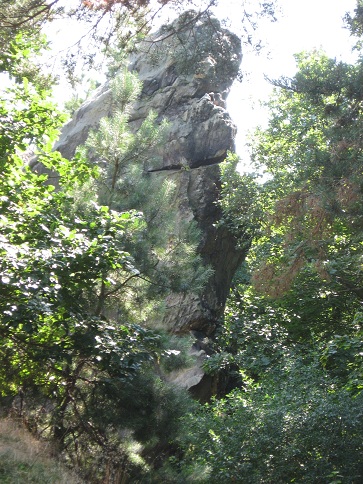 After the little geology lesson, let's just enjoy the pretty sights of picturesque grey and white sandstone rocks and green trees on a hot, sunny day. 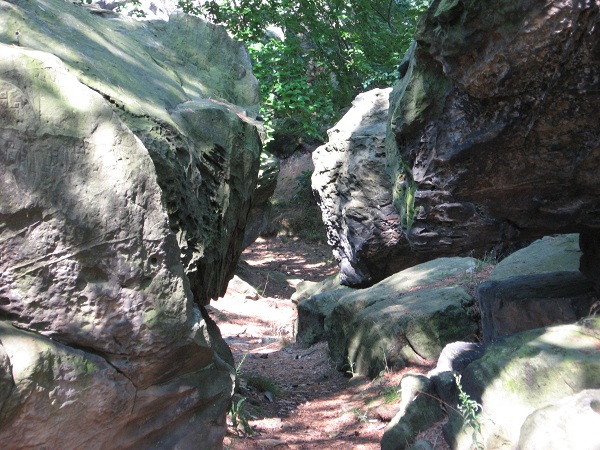 I did the tour together with my father some years ago. Yes, there were beers with our name on back in Quedlinburg. It's the best thing after a hot day out. *grin* 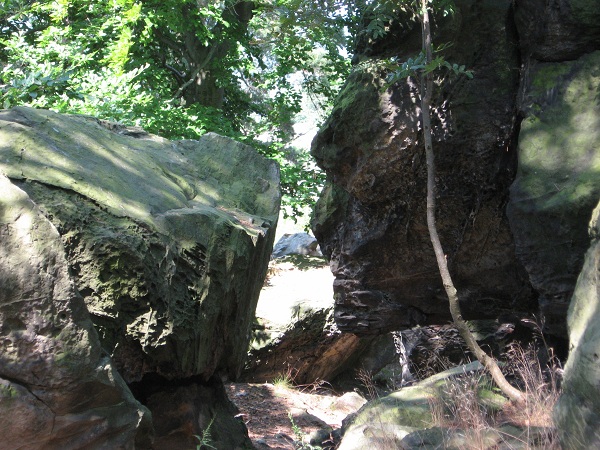 Different angle of the crag

The way around – and through – the formations near Blankenburg is, let's say interesting in parts. At some points, the path leads through narrow crags between boulders, partly natural, partly man made. 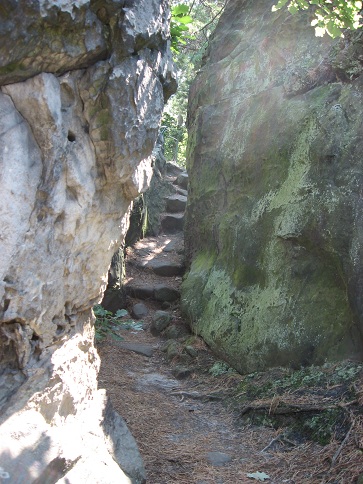 One can climb some of the rocks, but we didn't go that far (it requires climbing equipment, too). The viewpoint on the summit of Grandfather Rock is accessible by stairs, but it was a bit crowded that day, so we decided not to go up there. 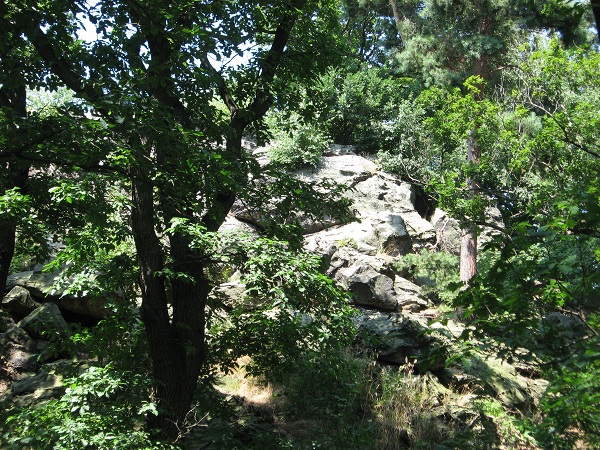 You can see that the ground once has been sandstone as well, partly weathered and turned into a thin layer of soil – trees win all the time – but there's quite an amount of rocky surface left to make for a pretty pattern. 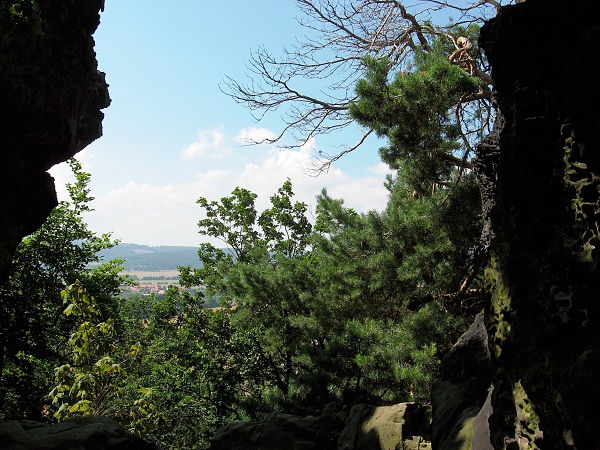 And another photo which I like well enough to share, though I have no more text to go with it.
Read more! ¶ August 06, 2021 2 comments