27 Sept 2006
The Roman Fort at Hedemünden - Introduction
A more detailed version taking into account the new discoveries will appear soon.

Since Caesar established the provinces of Gallia Lugdunensis and Gallia Belgica west of the Rhine in about 50 BC, the German tribes had developed a habit to cross the river and raid the richer places along the border. To put an end to this, Nero Claudius Drusus the Elder (known as Drusus) and Tiberius Claudius Nero (Tiberius) led several campaigns into the lands of the Cherusci and Chatti and pushed as far as the Elbe (Albis) between 16 and 9 BC. They managed to play the tribes and families against each other, and for some years it looked like Germania Transrhenania could become a Roman province. 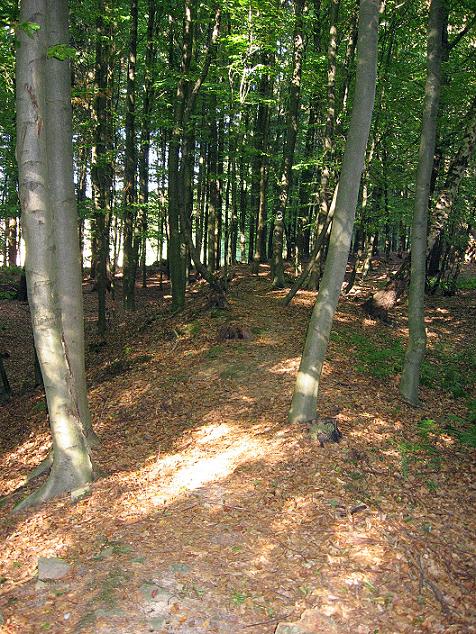 During this time, a base camp was established some 65-90 metres above the valley of a Werra ford, near a village now called Hedemünden. The fortress protected the ways that connected the lands of the Chatti (basically northern Hessia and southern Lower Saxony) with the lands of the Marcomanni (who migrated from the Main river to Bohemia) and Cherusci (middle and northern Lower Saxony, Saxony-Anhalt). The exact borders between the tribes are still disputed and the Roman sources none too clear. In a country of woodcovered hills and mountains, paths and rivers were strategically important. The fort at Hedemünden is so far the easternmost proof for a more permanent Roman presence between Rhine and Elbe; the known forts and settlements are all closer to the Rhine/Main/Lippe area.

First announcements of the find were made in 2004. The existence of walls was known earlier since they stood out in the landscape, but they were thought to have been an Iron Age hill fort until diggings by Klaus Grote of the Archaelogical Seminar Göttingen brought to light a number of Roman artefacts like pioneer axes (dolabrae), iron spear points (both hasta and pilum type), parts of horse harnesses, a broken gladius sword, and coins dating from the time of Drusus' German campaign. Grote and his assistants also found the remains of stone foundations for storage houses and discovered there were actually four forts, the main one used for storage and probably as garrison, the others as marching camps with less permanent structures (the soldiers may have lived in tents; there were a number of iron tent pegs among the finds).

Most of the buidlings and fortifications were made of timber, and conditions have not preserved much of that aside from post holes. The first version of Roman forts often were timber structures, even those later reconstructed in stone like Vindolanda - only the conditions in Vindolanda have preserved more of the wood. So what we do have are stone foundations, supposedly of storage houses and maybe other buildings (there seem to be two different sorts of foundation remains, one more crafted and fixed with mortar, and one that looks more like loose stones roughly hewn). 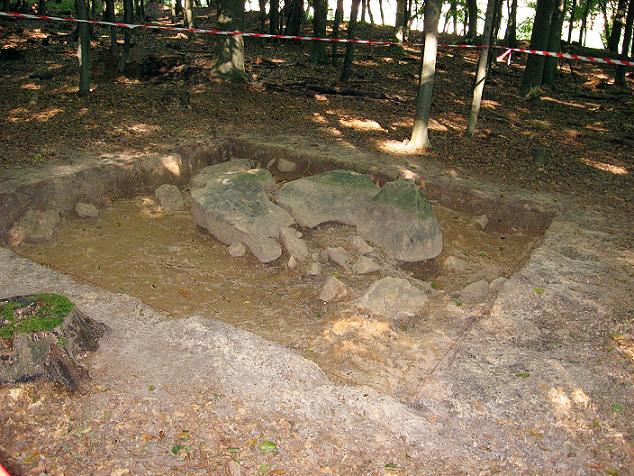 Crafted stone foundations.
Size, structure and strategical position and the already unearthed details within the walled ground of fort 1 (diggings are still going on) make it clear that it was a supply camp, intended to store foodstuffs (grain, salt, cattle) and replacement material for armour and weapons as well as fabricae (repair workshops) for the legions involved in the area. There may also have been a lazarett. A logistic centre like this was an important factor in organising the supplies. 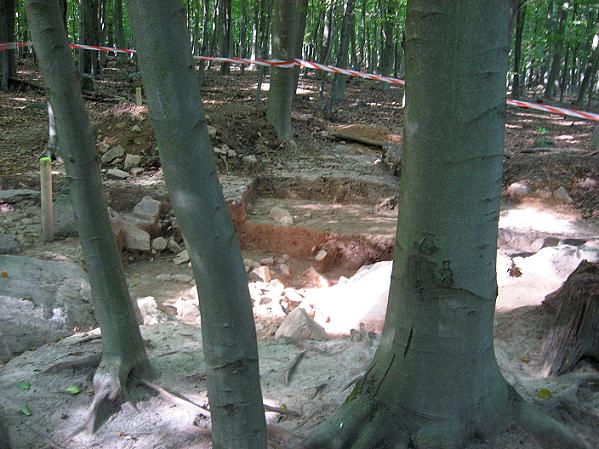 Another stone foundation
The second function of the fort was the guard and control of the Werra ford and the crossroads meeting there.

25 Sept 2006
I'm Back
Tired, and with a head full of new impressions. And yes, you greedy folks (you know who you are, lol) there will be pictures. I took lots of them, and I want to prepare and archive them first.

Btw, I ate some Roman food, and it was pretty good. Unusual in the combination of ingredients and spices, but a lot better than the stuff I tried in Karlsruhe last year. There seems to be a difference between a mediocre cook and a skilled maître de cuisine getting at those old receipes.

* Both names go back to the name of the Treveri, a Belgic-Celtic tribe that gave Caesar a hard time. The city was founded by Augustus in 16 BC.

So, for today you'll have to do with a view from the former Roman base camp at Hedemünden to the Werra (Visurgis). Don't we have some beautiful landscapes in Germany? 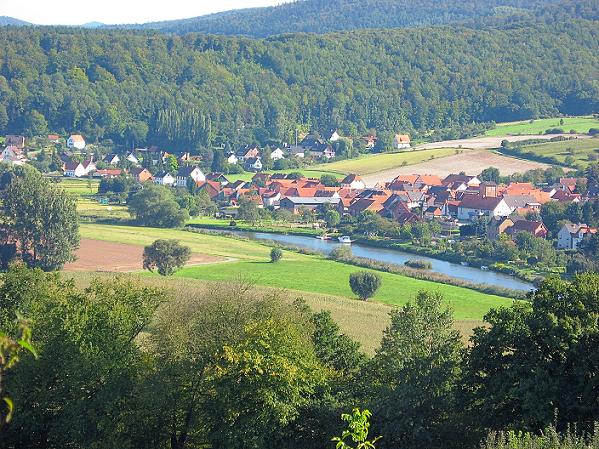 What one can't see with all the foliage in summer is that the Werra makes a bend to the right that brings the river much closer to the fort. There lies the old river ford the fort protected. Good reason to go back there after the leaves have fallen - it's not far from Göttingen.
Read more! ¶ September 25, 2006 6 comments