14 Oct 2006
Roman Spears and Axes
Most of the artefacts excavated at Hedemünden Fort were shown in the local museum of Northeim, a small town north of Göttingen. Photographing in museums is a challenge, if allowed at all, but I managed to get a few decent pics. 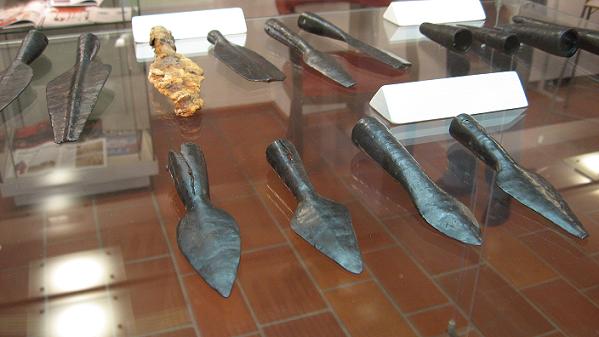 The iron hasta points were attached to wooden shafts. In the right upper corner you can see the iron butt spikes of the shaft end, and the yellowish one in the middle of the pic has been left uncleaned after finding to show what the archaeologists deal with.

Hasta points would be more permanently fixed to the shaft than in case of the pila because those lances are used for stabbing rather than throwing. 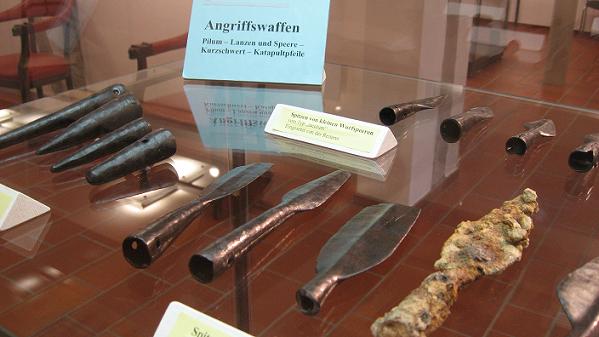 Same display seen from the other side
The three points in the middle are classified as iaculum points. Iacula were smaller javelins used by the cavalry. The exhibit to the very right is a spear point as it would look like when it comes fresh out of the earth. TV documentaries showing archaeologists digging out shiny stuff are always edited for the public. Those artefacts need professional cleaing and conservation first.

To the left is the drawing of a fully equipped 1st century legionary (taken from one of the tablets at Hedemünden). They were called 'Marius' Mules' after the consul Gaius Marius (175 - 86 BC) who restructured the Roman army and standardised the equipment. Note that during Marius' time the soldiers would still have been wearing a mail shirt; the lorica segmentata came into fashion only in the first century AD.

The legionary is equipped with the traditional two pila, and you can clearly see the points differ from the hasta ones. The pilum has a solid pyramidal point at the end of a slender iron shank; the shank is then attached to the wooden haft. The idea is that, when thrown, the pilum will continue to penetrate whatever it hits, to a greater depth than a spear. It may even punch through a shield and continue into the body of the shield-bearer. Nice, eh?"

Oh yes, very nice - depending what side you're on. *grin*

The points are also designed to break off the shaft after they got stuck which makes removal even more difficult.

Here is a more recent post about pila, showing a display of pilum points.


Below are some photos of doloabrae. A dolabra is a so called pioneer axe, used to fell trees and such, though it could also be used as weapon if needs be. What is left nowadays are the iron parts; the wooden handles usually have decayed. But the design hasn't changed much over times. 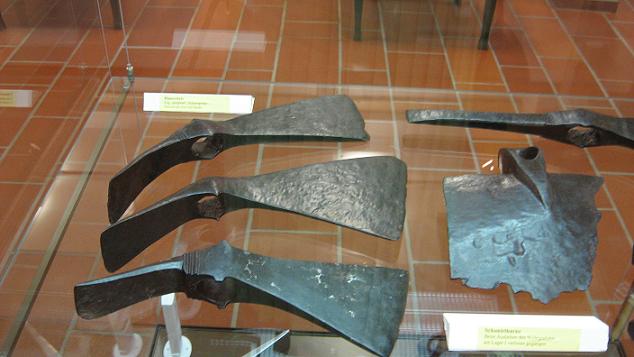 Dolabrae (left) and part of a shovel blade (right) from the Hedemünden finds.
Shovels were needed for digging trenches which formed part of Roman forts and marching camps. It is amazing to imagine that the Romans - according to the sources - on the first night of the Varus battle, after the German attack had already begun albeit not yet full scale, still managed to build a proper marching camp complete with entrenchments and walls. Says something about Roman discipline. 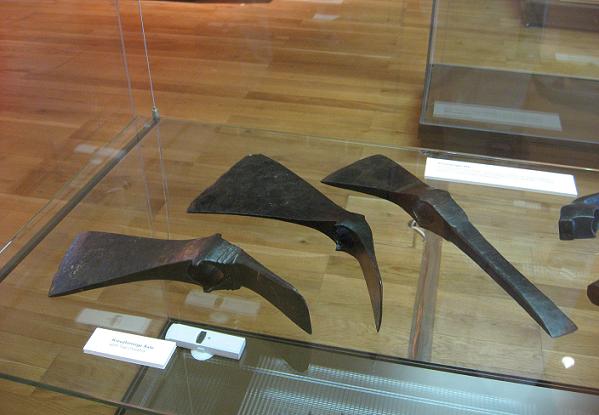 dolabrae
The pic shows some pioneer axes from the Hedemünden finds that were presented in an exhibition in Hannoversch-Münden in 2009 - the year of the 2000 year anniversary of the Varus battle.
¶ October 14, 2006

Comments:
Gabriele, any idea how heavy these things were? Did the signage include weight? How about type of hardwood they may have used for the poles? Length?

Inquiring minds and all. *g* I was just wondering how far off my reenactment spear is. Of course I've never actually thrown it at anything/one, mind you. Maybe it would work.

And nice legs too :-) In some movies I see the guys wearing short knee-length trousers under their, um, kilts ... is that inaccurate?

I love your history lessons!
There was one scene in an Asterix comic where a Roman soldier is trying to get across a Britan's garden, and the gardener stops him with a spear.
"Rome may be bigger than my garden," he says, "But my pilum is stronger than your sternum!"
LOL!

Constance,
I had no chance to hold a Roman spear yet so I don't know how heavy it would have been. Though I'd like to try to get a better feeling for it when describing the fighting scenes.
The shafts were mostly made of ash and oak.
Roman reenactment groups may know more, some of the members do an amazing amount of research about those things. I don't need to know how weapons are made, I need to know how they are used. :)

Crystal,
yes, Romans did wear trouses under their pteryges in cold climate. Didn't want to freeze their little friends off, I suppose. *grin*

Sam,
lol, I remember that scene.

I am like your dad. Wherever I go, I take photos of the info tables. Of course they are sometimes the biggest load of rubbish. There's one at Old Sarum Castle that shows what the 13thC latrine is supposed to have looked like, complete with mural featuring the nudes from the border of the Bayeux tapestry - eh????
I'm not up on the Roman world, but it's always interesting to see artefacts that I wouldn't normally, and which add to my general interest and general knowledge - so thanks.

Great information Gabriele! And yes I remembered to check your blog *laughs* (this is lessy BTW)

Late Romans wore trousers, or hose-like leg covers; they realised how sensible the Northern European barbarians were :-) It's the early Romans who apparently didn't, or just wore those short breeches. However, the cold weather in certain parts of the Empire may have changed their minds about being bare legged ...

Romans did not look the same over the hundreds of years. Weapons, armour and clothing changed, as per fashion. Since I do late Roman re-enacting, I've often been asked if I'm a Viking (!), just because I'm not dressed like a first century Roman :-)

Thanks again for all this great information.

Elizabeth,
thank you. Wow, who'd have thought 13th century toilets had mural paintings of naked people. I hope it wasn't a museum behind that. :)

Alex,
yep, Roman equipment changed a lot. The lorical segmentata the chap on the pic wears is a recent development for a soldier in the German wars; if my information is correct, during Republican times, chain mail was the fashion. And it seems towards the end of the Imperium mail became more popular again since it was more easily obtained than the segmentata.

Marie,
thank you very much.

The reckoning is that lorica segmentata when out of use early 3rd century, for whatever reason. Then it was back to chainmail big time, but without the shoulder clip thingies. I like the later clothing better than the earlier stuff, but then I'm just a northern barbarian :-)