29 Aug 2007
Let's Play
Here are some Roman toys from the Saalburg Museum. There is a special exhibition for children where Roman life is explained in an easy to understand way; and the curators took care to find some extra goodies for the kids. Most of the material presented in the museum is from excavations in the Saalburg area, but the toys partly come from other diggings.

Since wooden and other organic artefacts have seldom been preserved, our knowledge about Roman toys is probably limited, since there will also have been wooden figures, rag dolls, and the like that haven't survived. 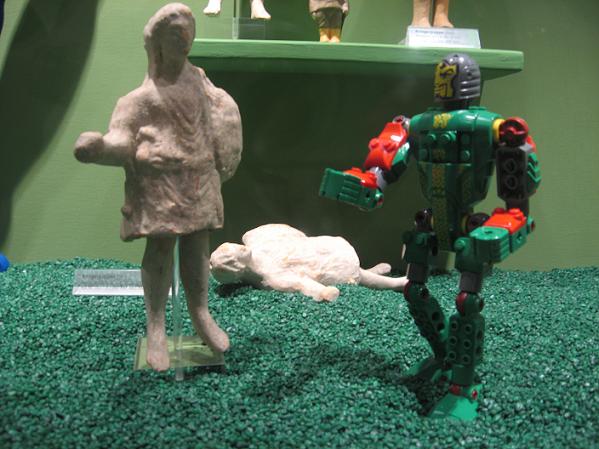 The little guy was less bendable than his modern counterpart, but he had a removable spear in his hand, and he was painted as brightly as the star trooper that keeps him company. The shield is too small for a Roman foot soldier, though, and the hair style looks like a Suevi knot, so maybe he was a member of the enemy army, or an auxiliary.

If the boy who owned the figure was lucky and had several of them, he could act out fight scenes. My brother and I played with figures of Indians, US soldiers, and a few pathfinders. *grin* 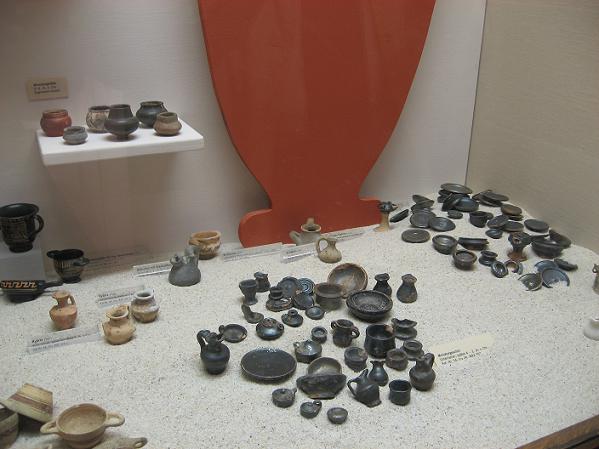 Miniature tableware and kitchen utensils
I won't be surprised if it had a pedagogic purpose besides mere play. Even a girl from a wealthy family - and I suppose only such a girl would have a had that sort of toys - would need to know what was going on the kitchen in order to be able and oversee the slaves later in her life. 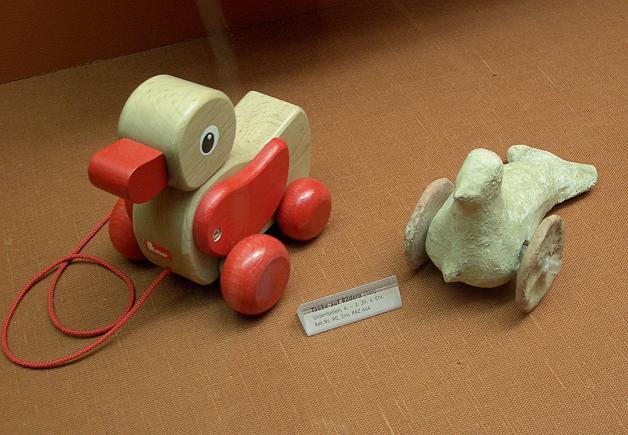 Roman wheeled bird to the right
Some things don't change much. Though the Roman one looks more like a dove, not a duck. The wooden axle that didn't survive has been replaced with plastic, and the eye to run a rope through has broken off. But the wheels did actually work. 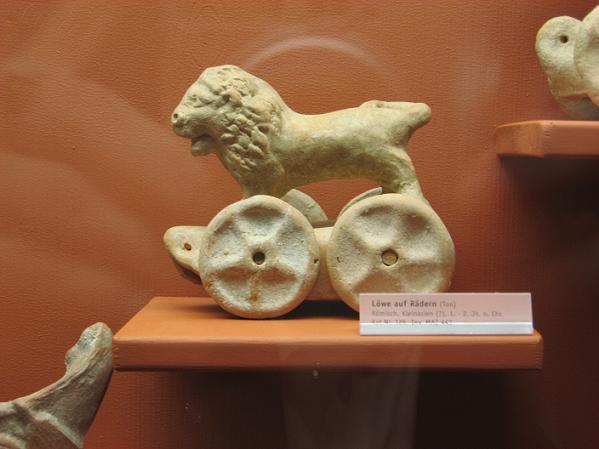 Comments:
What a cool post! I liked the way they put the modern toy with the Roman one. The kid in me liked the comparison ;-)

Yes, I liked that comparison too! The figures are even the same size - I suppose kids' hands haven't changed much in a couple of thousand years :-)

Gabriele, could the toy soldier represent a tribe that used small shields? I don't know enough about dress and artefacts to identify him, but maybe you do? I wonder if the kid lost the spear and Daddy had to keep making/buying replacements?
Am I right in thinking that the wheels on the lion would go round so you could push it along? (At least the Romans didn't have to worry about 'Batteries Not Included'!). This is going to sound terribly girly, but I remember having a dolls' tea set when I was small. Nothing changes :-)

It's comforting somehow to know that there were tea sets then.
I still have mine, complete - probably because I spent more time playing "war" with my brother than serving tea to the cats.

Shelley,
it was a fun exhibition. I'd have taken more pics but it was difficult with a whole class of Japanese or Korean school kids around. They were a lot more disciplined than German kids, but there were still about 30 in a rather small space.

Carla,
I took a closer look at the large version of the photo. It's difficult to tell the details without the colour (though there are some little patches of a reddish brown left), but I think the hair style looks like a Suevi knot, and the tunica doesn't look entirely Roman, either. I was a bit confused by the lack of trousers or breeches you would expect in a tribal warrior, but maybe it was a hot day.
I edited the post to add the info that it might have been a Suevi warrior.

Bernita,
my brother still has his set of figures of Indians, cowboys, soldiers and trappers so popular among German boys - and the occasional girl. I'd have kept the set as well. :)

And yes, Carla, the wheel of the lion did move.

I love this post - it makes the ancient times seem so close. What little girl wouldn't love that tea set? And the lion on wheels is gorgeous!

Lol, I'd have filched the soldiers from my brother. :)

In fact, I did. Though I had a whole miniature kitchen with equipment.

I have a tea set somewhere. Don't think I ever played with it, though. But I don't think I ever filched my brothers' toys either. Mum didn't want to encourage gender stereotypes so she got me lego and Thunderbirds figures as well :) But my favourite toys were my dad's shoes, an old calculator and homemade stuff like paper parachutes...

And I want one of those lions...

Oh, I got Lego, too, and my mother taught me how to use a drill and solder. A normal family we were not. :)

The toys are very much like the ones found in Greek children's tombs. I love the little lion. I've seen horses on wheels but not lions. I have seen some terra-cotta clay dolls with jointed limbs on exhibit in Greece. No doubt there were rag/straw dolls too. Very interesting post.

I would bet the Roman child’s soldier is a lot less likely to break if dropped, thrown or stepped on than that modern toy.

And what is the fun of playing with toy soldiers if they don’t get dropped, thrown or stepped on. At least I doubt the Roman solider had the indignity of having a handkerchief tied to him to be a paralegionaire.

I liked the lion to.

It's funny, you don't always think of that stuff when you think of history. Nice post!

Hank,
I think the Roman ones could break, too. Maybe it was the first lession for the future officer: if you don't take care of your army, you'll be without one soon. ;)

What's the toy soldier made of, Gabriele? He looks like some sort of ceramic or pottery to me. If so, he might be more breakable than his modern counterpart. .

Carla, the original looks like stone, but I'm sure where were ceramic ones as well - myabe different price groups. :)

Paralegionaries? Hank, you're giving me ideas that I shouldn't have. It's bad enough that ninjas turn up at just about every battle... Lol.