27 Feb 2008
Trees and Old Stones
One of my favourite combinations. It can be found in the middle of York. The stones may not come as surprise, lol, but there's an entire park hidden behind a wall that stretches down to the Ouse: the Museum Gardens. 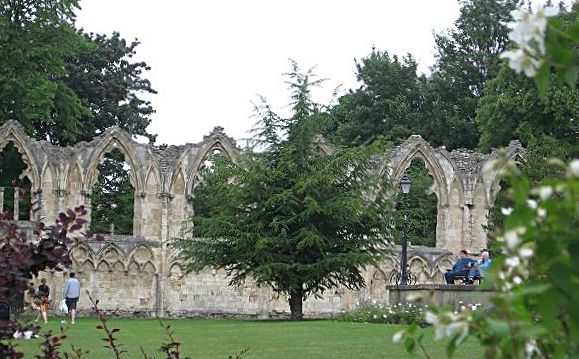 The Museum Gardens were opened together with the York Museum in 1830. The Yorkshire Philosophical Society commissioned the museum, and they were also interested to preseve the ruins of St.Mary's Abbey which they had excavated in the 1820ies. Another view of trees and the abbey
The society appointed the landscape architect Sir John Murray Naysmith to lay out a botanical garden with exotic trees and plants and integrate the Mediaeval and Roman remains. In Victorian times, the garden also held a conservatory for orchids and a pond with water lilies. Those are gone, but the ten acre park remains. 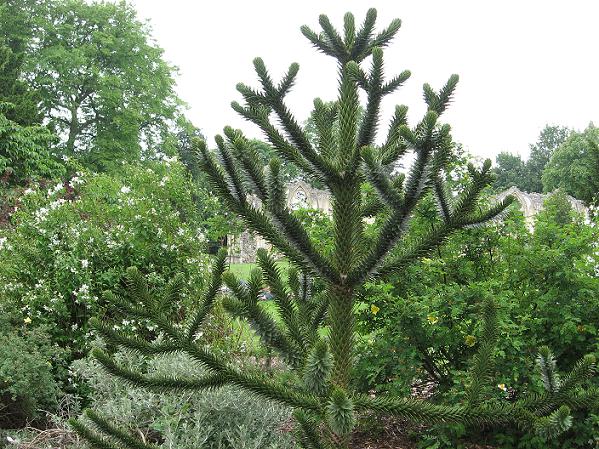 Exotic trees (in the foreground a monkey puzzle tree)
The park covers the ground that once belonged to the abbey. Parts of the walls from 1260 still remain.

After spending hours standing in front of exhibitions in the museum, it was nice to sit down in the green and have a cup of tea. 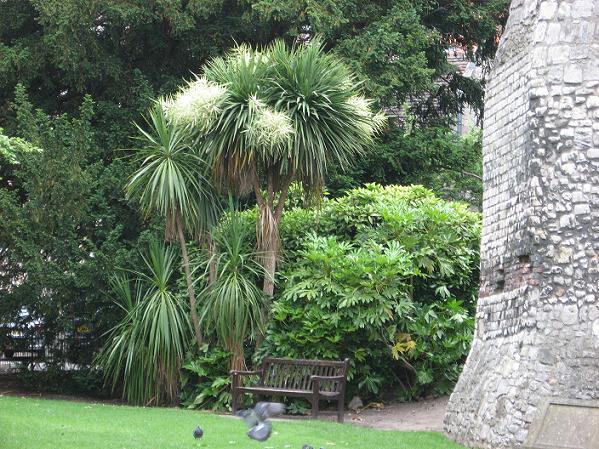 More exotic trees; to the right part of the Roman tower
There is more where this came from. You can imagine I could not resist the temptation to take lots of pics of the old stones. Luckily, there were moments I could catch them without a bunch of school kids in red jumpers running all over the place.  ¶ February 27, 2008

Comments:
Interesting pics. thanks for sharing.

Lovely! Trees and old stones go so well together :)

*has a sudden urge to play hide-and-seek*

Hi Travis, welcome to my blog.

Celede, it would be a great place for hide and seek. :)

Gabriele, nice photos. The tree in the bottom photo is a cabbage tree from NZ. In my blog post about Wellington last week there were some cabbage trees in front of our parliament.

Oh, I love the Museum Gardens! It's so peaceful. When I was there there was a pretty squirrel bounding about looking for scraps.

Lovely pics! Although I've been to York lots of times, I can't ever remember being in the Museum Gardens before.

I liked the peacocks in that park. The males would strut, and show off, and the peahens would ignore them, creating typical comments from the human audience who were always ascribing human emotions to the old age ritual.

I believe it was where pieces of a gargoyle sculpture was incorporated into a dry stone wall, causing my wife to exhibit signs of horror that history would be treated in such a cavalier fashion.

Constance, I could do with some spring as well. I don't mind a winter with snow, but I'm tired of rain and wind and brown grass.

Shelley, cool. I had no idea that they are from New Zealand.

Carla, I saw some squirrels, too. Interesting, because it were the first grey squirrels I saw; we still have the red ones here.

Alianore, next time you should give them a try - prefereably in when everything is green and in flower.

Bill, yes, it's the multiangular tower.

Super photos, Gabriele. A couple of years ago I stayed with an archaeologist friend in York whose partner (also an archaeologist) gave me a guided tour of sites he'd worked on including the multangular tower and associated city walls and the nearby medieval St Leonard's Hospital. Fascinating. The Yorkshire Museum in the gardens is also fab.

Oh, lovely ruins! *adds York to list of places to go in the summer*

And I'll be willing to help you with the kidnap of an archaeologist tour guide, Gabriele! Mwahaha.

I never look at your pictures without seeing plot bunnies all over, Gabriele.

Kirsten, you should try and visit York, it's great. About that archaeologist - do we need a net, or some chloroforme?