17 Feb 2008
Walking in York
Here are some pics from York's Old Town I took while walking around and enjoying the pretty views. Since it was already late afternoon, it was not too much of a pushing your way through clusters of tourists. It was worse the next day, so I was glad I had already taken a bunch of pics.

The place reminded me a lot of Stockholm's Gamla Stan which has equally narrow streets. Göttingen has some fine old houses, but the streets are broader. 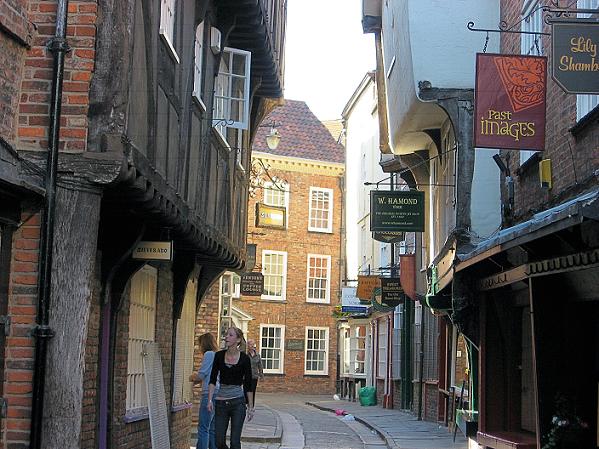 Low Petergate is the old via principalis of the Roman fort. My hotel was situated in that street as well, which I thought very fitting. 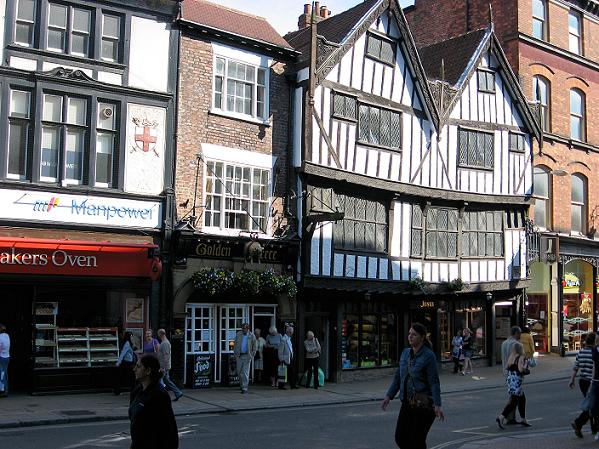 Market Street
One of the broader streets in the centre. There is at least enough space for cars, but only taxis and buses are allowed.

The structure of the half timbered houses is different from the German one; we have more square structures and not those long, vertical beams, as can be seen here. 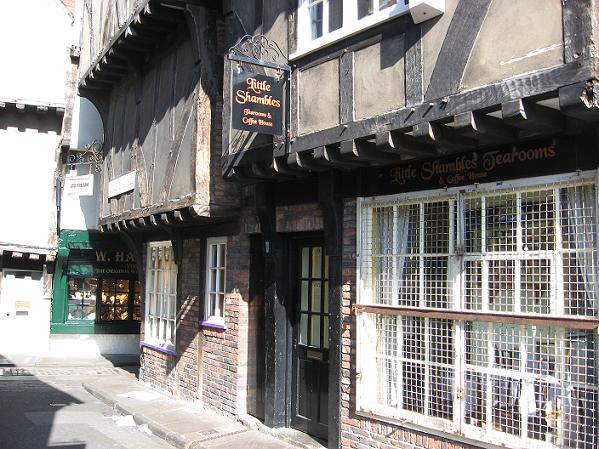 Little Shambles
It is a common feature for Mediaeval houses all over Europe that the second storey is built standing out over the first. The reason for that were taxes depending on the space of the foundations.   ¶ February 17, 2008

Comments:
Hi Gabriele, I tagged you. :)
P.S. Loved the pictures, I would so love to go back to York and, you know, stay forever. :)

York looks like a nice place to live. Probably expensive, too.

The pictures are very nice Gabriele. You really make me want to visit York. Someday I guess I will. Thanks for posting these.

It must have been terrific to be staying in Low Petergate, right in the centre of the city, knowing that every time you go out you're walking the very street your Roman-period characters would have walked (though the buildings would have been a bit different!).

Jeff, York is definitely worth a visit.

Lol Carla, I felt like wearing that helmet all the time. :)

Splendid photos, Gabriele. I'm going to York for the Historical Novel Society Conference in April so will give the city your regards. Hope to get some photos too as there's a guided tour on the Sunday with a York archaeologist.

Sarah, a guided tour with an archaeologist sounds like a LOT of fun for us history geeks. Wish I could sneak in. :)

I loved York when I visited. The narrow streets were cute and York Minster is impressive.

Oooh York! I was there (though only for an afternoon) about 1/3 lifetime ago :) I'd love to go back and really explore.

Shelley, the mister IS impressive, even to me who's seen a few large churches.

You should go back, Celedë, and take at least two full days, better three. The York museum alone takes several hours to explore. :)

In all the many times I've been to England I have never been to York. After looking at your photos now I really want to go!

You should plan a trip to the UK and Germany, Wynn. :)

When I built a "medieval" building for a Ren Faire, I had to study construction methods. The whole story, including joints used in the woodwork and why is all here... http://www.southtower.on.ca/Library/library.html (Yusef's Post and Beam Experience)

however I discovered that the real reason for building jettied buildings was that you didn't want to get too many joints in the same spot. That jettied buildings are amazingly strong is clearly shown by how many still survive after all these years, even in the damp climate of the UK.

Taxation in Yorkshire had more to do with the number of windows I think.