6 Mar 2008
Rebels, Scots and Jews - The History of the Clifford Tower in York
William the Conqueror had a motte and bailey castle built on the site in 1069. Since William and his Normans weren't the most popular guys in the area, the first wooden keep with earth wall fortifivation saw a lot of action, and some destruction and rebuilding in the following years.

The name Clifford's Tower dates to the late 13th century. 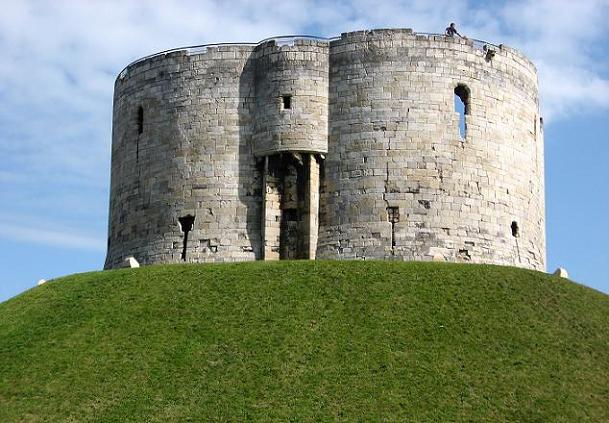 The castle was still a timber construction when King Henry II received King William's homage for Scotland in 1175. The tower played a sad role during the reign of Richard I. 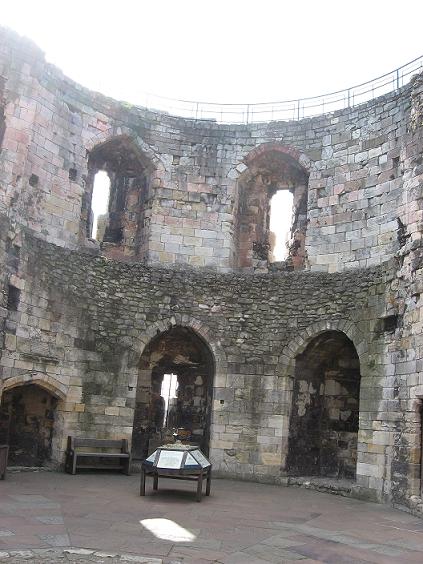 In the 1170ies, a Jewish community had been established in York. Not only was there an increasing demand for credit among the lords, gentry, and even the Church, York also offered a castle - still a timber construction - where the Jews could find shelter in times of danger, or so they hoped.

The crusades (one of which started in 1187) inflamed feelings of antisemitism. It came to a riot during Richard Lionheart's coronation in Westminster Abbey in July 1189. Richard let some of the leaders hang and made it clear that the Jews were not to be molested in his realm. But after he went off to join Philippe Auguste on the crusade, new riots broke out in several English towns.

One victim of the West-minster massacre was Benedict of York, member of a deputation to the king. Troubles were not over for his family, though, because in March 1190, a band of men broke into his house in York, killied his widow and children, set the house on fire, and carried away Benedict's money chests and valuables. The riot soon spread and more houses were plundered and destroyed. The Jews, under their leader Josce of York, sought shelter in the castle keep, with an angry mob milling around outside.

Things got worse when the Warden of the Castle was denied admission because the Jews were afraid he might hand them over to their enemies. The warden returned with armed men led by the sheriff Richard de Malebys who happened to be deeply in debt to the Jews and laid siege to the castle. Facing torture and forced baptizm, many committed suicide, while others died in the flames of the wooden tower which the mob had managed to set afire, the few survivors were killed. About 150 Jews died in the inferno.

When the king's Chancellor learned about the incident, he dismissed the sheriff and the warden for failing to prevent the massacre and imposed a heavy fine on York's citizens.

Since the mob had also destroyed the records of debts due to Jews which were kept in the cathedral, Richard, upon his return from the Holy Land and captivity in Germany, introduced a system of duplicate records. It was not gratitude towards the Jews who paid the major share of his ransom, or any feelings of political correctness, but he wanted to ensure the Jews' fortunes were correctly listed so he could tax them. 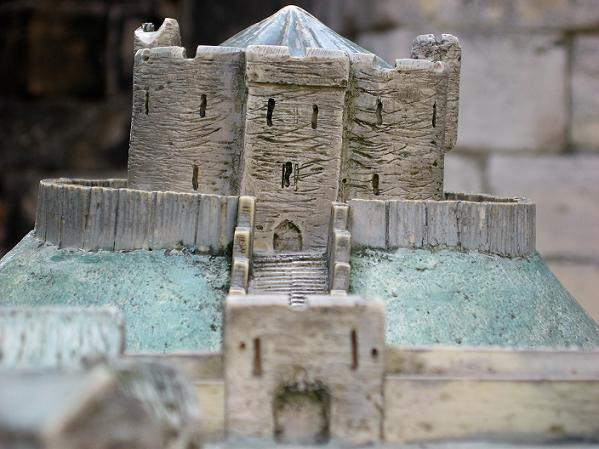 A model of the tower, displayed inside the keep
When a big bunch of Scots were milling at the borders (again) in 1244, King Henry III visited the castle and ordered it to be rebuilt in stone. It took some 20 years to accomplish; the bailey received a curtain wall and two gateways, and the motte was crowned with a stone keep, then called King's Tower.

King Edward I used the castle to keep his treasury while campaigning against the Scots in 1298, and so did his son Edward II in 1322. But Edward II had problems not only with the Scots but with assorted rebels in his own realm. He defeated some of them at the Battle of Boroughbridge and had them executed at York. One, a Sir Roger Clifford, was hanged in chains outside the King's Tower which then was named Clifford's Tower. It's not clear whether he was hanged and the body displayed that way, or whether he was hanged there by his wrists to slowly die and rot. Whatever way, it was a demeaning punishment for a nobleman. Maybe Kathryn knows more about the incident. 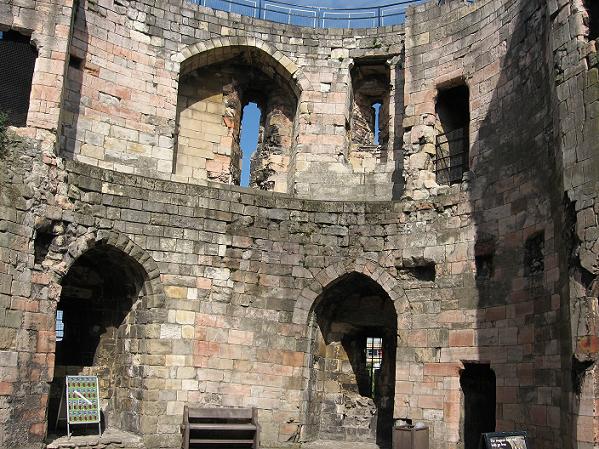 Clifford Tower, inside view
Edward's wife Queen Isabella had been to York, as did her daughter-in-law Philippa who married Edward III in York Minster in 1328. During those times, the castle served as administrative seat, but already in 1358 the heavy stone keep was damaged because the ground gave way. 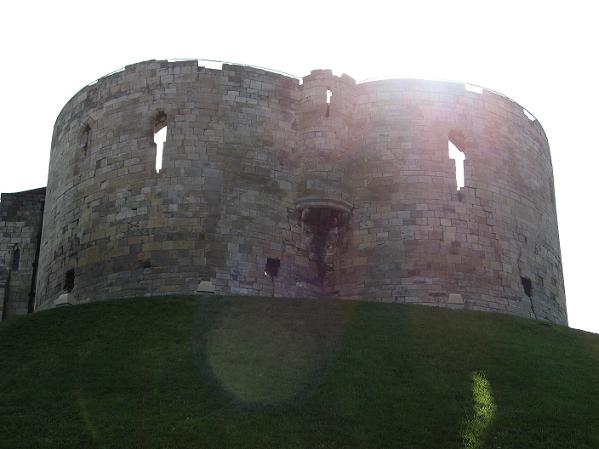 Another shot of the tower, this time against the sun
In 1484 the castle was in such poor repair that King Richard III ordered parts to be replaced, but since he didn't find a horse in the battle at Bosworth, his orders were never executed. 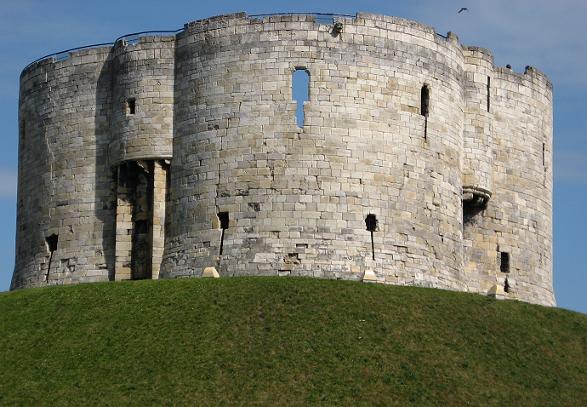 Another view of Clifford Tower
York Castle also played a role in the Civil War that broke out in 1642. The Royalists under Henry Clifford Earl of Cumberland took possession of castle and city of York and garrisoned them. The castle was repaired and the walls strengthened so they would support cannons. In April 1644, anti-Roaylist forces marched in from three sides: a Scottish army under Alexander Leslie Earl of Leven from the south, Parliamentary troops under Lord Fairfax from the east, and somewhat later, Edward Montagu Earl of Manchester added a third contingent, bringing the forces that besieged York up to 30,000. 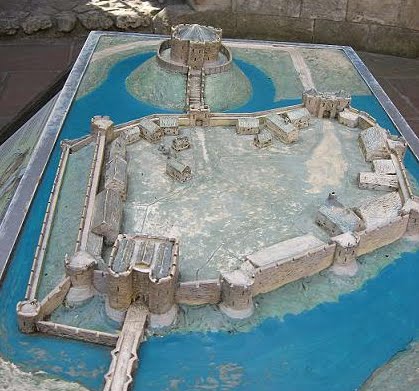 (Left: Model of castle and motte with tower)

The city was commanded by William Cavendish Duke of Newcastle, the caste garrison of about 200 men by Sir John Cobb. Despite bombardement, attacks on the gates and undermining (unsuccessfully, it seems), York held out throughout May and June. Then news came that Prince Rupert was on his way to relieve the city. Rupert did indeed manage to lift the siege, but the day after his forces were defeated by the Parliamentary troops in the battle of Marton Moor six miles west of York. It was the largest and most bloody battle of the Civil War.

On July 14, city and castle surrendered after a re-newed siege. The conditions seem to have been rather favourable, since the Royalists were allowed to march out with full honours. The castle was then razed.

Some rebuilding was going on after the restoration of Charles II, but York Castle never regained its former splendour and role in history. One of the heralidic panels over the gate displays the arms of Henry Clifford Earl of Cumberland (last of that line), and it's argued that Clifford Tower was named for him.

Since the Civil War is too late for me to have better information than what I could find online, I'm not sure about Earl Henry's role in the siege; he seems to have been strangely absent, leaving command to Cavendish and Cobb. I also got the impression the name Clifford Tower was in use before the Civil War and thus the theory that it came into being because of Roger's execution still is valid to me until I can find sure proof in favour of one or the other. 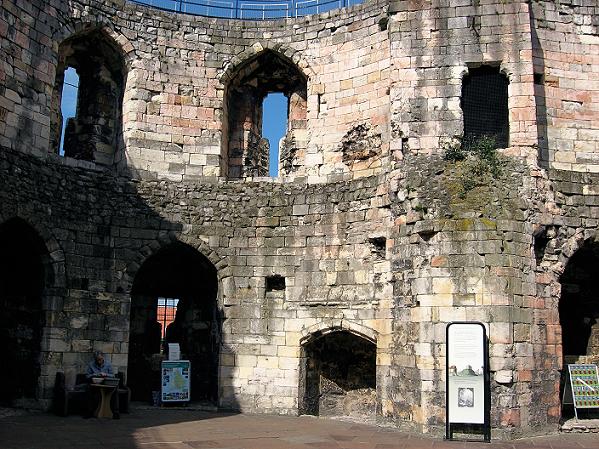 Clifford Tower, another inside view
A final little curiosity about the tower: One of the keepers in the 16th century was one Robert Redhead who became famous for having sold some of the stonework. Ten layers were already gone until anyone noticed the battlements were disappearing. Robert was hanged for that.
¶ March 06, 2008

Comments:
Gabriele: Clifford was wounded at the battle of Boroughbridge on 16 March 1322, and forced to surrender. A week later, he and John, Lord Mowbray were dragged to the Tower in York and...here's where I'm not totally sure of the answer to your question. :-) The Bridlington chronicler only says 'they were hanged in chains'.

Two years later, a group of bishops petitioned Edward II in parliament to have the bodies of the twenty-odd men executed in 1322 taken down and buried - finally. Maybe this means that Clifford was hanged, umm, normally, and his body left hanging in chains for a couple of years. He was very young, by the way - only 22. I sometimes wonder why he got the honour of having the Tower named after him, and not Mowbray! :)

It was humiliating treatment for noblemen, but at least they didn't suffer as much as Bartholomew Badlesmere, given the full traitor's death at Canterbury a few weeks later.

Dang chroniclers, can't they be a bit more specific. :)

Maybe Clifford had the Young and Wounded pity card. Was he handsome as well? :)

"his orders were never executed" Unlike himself :-)

Those are great pictures. Imagine, a sunny day in England.

Was he handsome as well? :)

Lol Carla, poor Richie, he really should have brought a second horse. :)

Linda, I actually had luck with the weather, it only rained one afternoon in ten days. And that sunny afternoon came after the dreary morning in Segedunum. :)