13 Sept 2008
New Finds in Hedemünden
In 2007, two additional camps have been discovered on the other side of the Werra (Visurgis) river. Those outposts were in sight distance of the main fort and connected to it by a system of Roman roads. Diggings will go on; among the finds already brought to light is a beautiful 29 cm long pugio and lots of sandal nails. The new discoveries prove a "considerable Roman presence at Hedemünden," says leading archaeologist Dr. Klaus Grote. 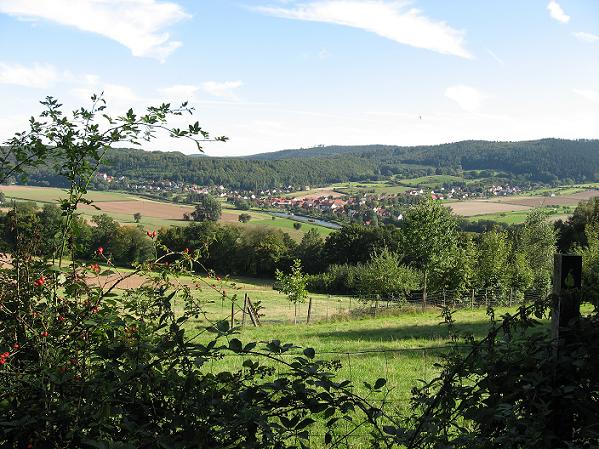 View over the Werra valley and hills from Hedemünden Fort
Another interesting find has been made in 2008: Another dagger and a fetter to secure prisoners, constructed to fix head and hands in the style of a Medieaval fiddle. It's a two part structure made of rounded iron; neck and wrists were put into the rings and then the fetter was closed with a bolt and secured with a padlock. The fetter is complete except for the padlock. 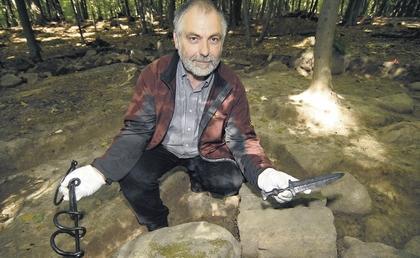 If you take a close look you can see the rings are actually shaped like a snake winding around the bolt. You gotta love people who gave even shackles a stylish design.

No similar fetter has been found so far, albeit it is known that the Mediaeval fiddle type shackles are based on older models. But excavated Roman models so far are either irons rings with chains to be used on neck or ankle, and manacles. The Hedemünden fetter is the super-find of the year, lead archaeologist Klaus Grote said. It has come to light in one of the smaller camps surrounding Hedemünden fortress, near Oberode.

The fetter was found together with other pieces from Roman times in the same archaeological strata 35 cm under the surface. Besides parts of a horse harness, a tent peg and shards of an amphora, there were some coins dating 16-8 BC, a sure proof that the fetter is indeed Roman.

The legionary dagger or pugio has been found in the main camp. It was deposed under two large sandstone blocks surrounded by a ring of upright stones, a sign that it had not been lost but was placed there on purpose as building sacrifice. The stones sit on the place of a former timber building. 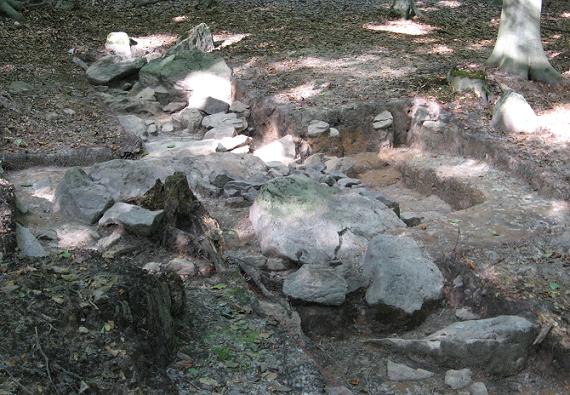 One of the stone foundations in the main camp
Legionary daggers are not only a weapon but also something of a status symbol a soldier would take care not to lose - the reason why they're a lot more scarce than fe. spear points; another argument in favour of a ritual placement of the dagger. Though I'd like to know what sort of ceremony would entice a legionary to give up his dagger.

The two pugio finds at Hedemünden are the only ones in Lower Saxony. The weapon, Mr. Grote says, would have been a sensation in itself but for the even more spectacular fetter. 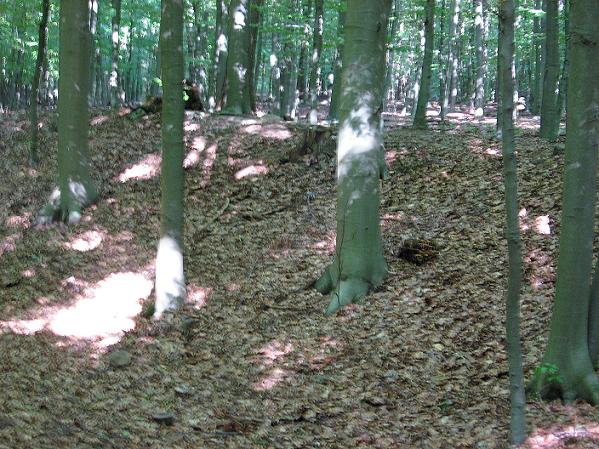 Another shot of the wall and trench fortifications
Considering the timber/earth wall fortifications and first steps into rebuilding some of the houses in stone may imply that Hedemünden could have become a major Roman fort with an annexed vicus, or even a town if the Romans had not decided to abandon Germania after the defeat in the Teutoburg Forest and Germanicus' not very successful attempts to conquer Germania in 14-16 AD.

All in all, some 2500 metal objects have been discovered since 2003, weapons, tools, coins, jewlelry and everyday objects. Alas, diggings will have to be stopped next year for the lack of fundings, chief archaeologist Klaus Grote says. It's a pity that there's never money for those things. We can only hope the new finds may change some peoples' minds about funding. 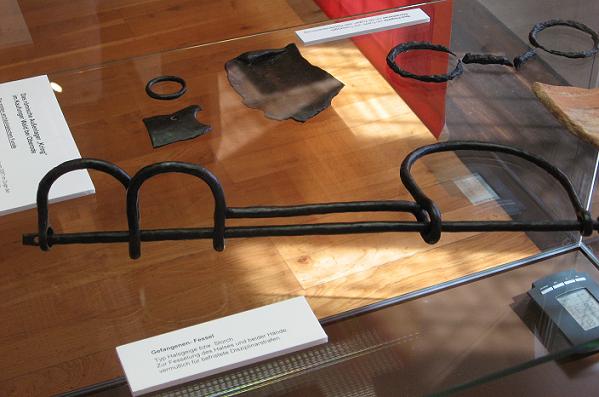 Roman fetter
The restored version of the fetter, photo taken by me in an exhibition in Hannoversch-Münden 2009. Fetter and dagger have been cleaned and restored by Helmut Biebler in Mühlhausen.

The neck goes in the large loop, the wrists in the smaller ones, then the whole thing is fixed with the bar. It looks decidedly uncomfortable and the iron was probably going to chafe after some time.

Comments:
Fascinating stuff, and a wonderful restoration job on the dagger and fetter.

Archaeology is a black hole into which you throw money. According to "English Heritage Magazine", more than 90% of excavations are considered to be "rescue digs", done quickly before a motorway goes through the site or a new building gets erected. The Coppergate dig (in York) was a rescue dig, for instance. The Mary Rose had to be pulled up because yet one more anchor was dragged through the wreckage. And the results of the Canary Wharf dig are still being evaluated.
This means most archaeology tends to be "not planned". Often, the term "mad scramble" seems to apply! When you get "planned" digs, you get the Vasa, or the Stonehege post holes, or Sutton Hoo, or Troy.

Then there is "restoration". More fun because, well, you don't have to worry about damaging the artifact. I made some armour for the kids to try on at a museum most of your readers will never get to! (shameless plug follows...)
http://southtowerarmouringguild.blogspot.com/search?updated-max=2007-10-11T06%3A05%3A00-07%3A00&max-results=20

I would love to get in on the restoration of the Cutty Sark, though there is plenty to keep me busy right here at home.

I have actually done some restoration like the dagger in the picture...it is a deceptively simple process involving electricity, and the results are, ummm, startling. Most of MY restorations are old horseshoes, bayonettes, parts from flintlocks, and occasionally some old knife blades. This fella's restoration work is the best I have ever seen....the fetter looks like it was made only last week!

Yeah, they look very pretty, Bernita. I hope I'll get a chance to see the real things.

Stag, we have rescue diggings here too, but fortunately, Hedemünden is not one of those. The biggest problem if they have to stop digging for a season or two will be the illegal diggers with their metal sonds. The area is too large to keep those criminals out, and punishment not severe enough.

I think Mr. Biebler also restored the spear points and axes I've seen in an exhibition - very fine work indeed. Have you ever seen a 2000 year old original find? Sometimes I wonder how archaeologists can tell there's something inside those caked lumps. :)


Great post. The dagger cleaned up looks ready to use, and unlike swords they were more work tools than weapons. It looks like some of the ones in the sports store, if the design was good it still is.

Did I see a legion of plot bunnies forming ranks?

Hank, that plotbunny legion attacked me already when I visited the site, but maybe I can sneak the fetter in as well. ;)

Wow. Those are some cool finds. I really hope they get some funding to carry on. Who knows what goodies are lurking just under the ground there? :)

Kirsten, it's too bad they don't have volunteer diggings like in Vindolanda; I'd like to play a bit in that mud. :)

Fantastic. Those finds look almost like new - it must be such a buzz when you are the first person to see something like that in all that time.

Amazing finds, especially the fetter. About the dagger as a foundation deposit, is it possible that it could have been made on behalf of the legion, e.g. from a sort of central store, rather than being a particular legionary's personal dagger?

Lady D, I can imagine archaeologists never lose that fascination in their job.

That could be the case, Carla. I'll have to try and find out more about these things, they're what lends a novel more authenticity.

That is insanely awesome!

Really interesting post, Gabriele. I don't think I'd like them used on me, despite their stylish design.

Lol Shelley, I don't think the Roman soldier or German captive who may heve ended up in those would have liked it. :)