18 Sept 2008
Goslar
Goslar in the northern Harz is another foundation of Heinrich I, and like Quedlinburg, it's part of the UNESCO World Heritage. I think Heinrich would like that if he came back today. I bet he'd also visit the idiots responsible for deconstructing most of the cathedral in the 19th century; and they would not like that. Those Heinrichs and Ottos had quite some temper. 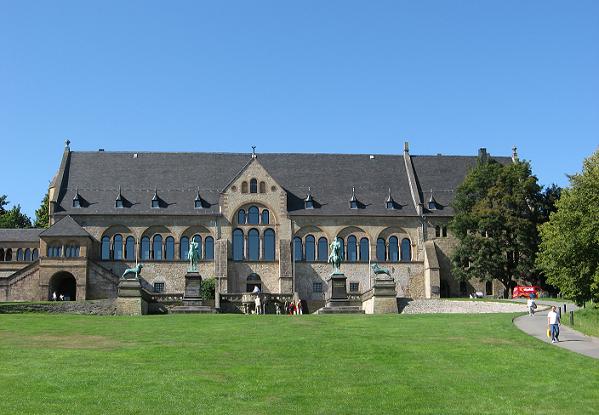 Fortunately, the attitude towards the past changed before someone could destroy the Imperial Palatine Castle as well. The 11th century building is the largest and best conserved secular piece of architecture of the time in Germany. The palatine castle in Goslar was the most important palace of the Salian dynasty, and Goslar the place of several meetings of the nobles of the realm, the Imperial diet Reichtstag. Heinrich IV granted the town Imperial immediacy which means the town answered directly to him with no interference from anyone else in the feudal hierarchy. That would later be the reason for a lot of troubles between Friedrich Barbarossa and Duke Henrich the Lion who both wanted the town and the silver from the nearby mines. Friedrich won, and Goslar remained a royal fief. 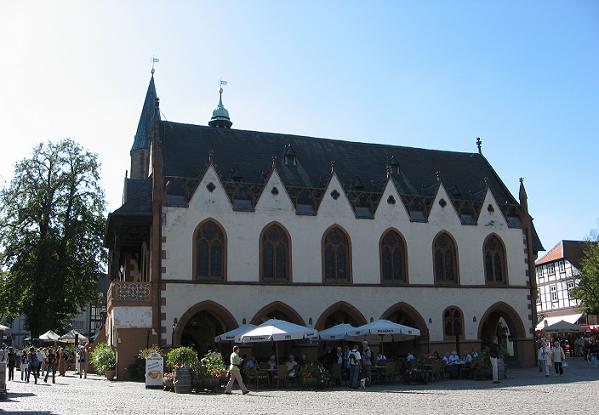 Town Hall
The burghers benefitted from the rich silver mines in the Rammelsberg mountain, and the town thrived. We got another fine example of a Medieaval (late Gothic, to be exact) town hall, more half timbered buildings and also ones covered with slate tiles to prevent the rain from soaking the walls, a typical Harz feature - slate is found there. Goslar joined the Hanseatic League. It lost its independence only as late as the 16th century and fell to the House of Welfen, successors of Heinrich the Lion. 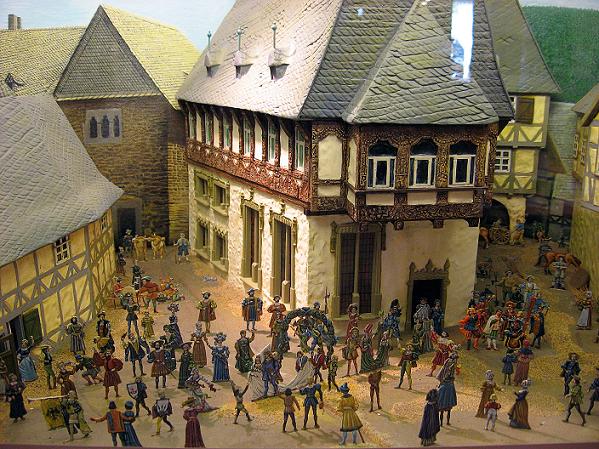 Mediaeval Goslar in a tin figure panorama (Tin Figure Museum)
Several of the houses still exist today
An interesting building is the 12th century hospice Grosses Heiliges Kreuz. It offered shelter to the infirm, the poor and orphans, but was also frequented by pilgrims who would find a meal and a bed there. Part of it is still in use as old peoples' home, and one row of the small rooms established in 1650 is occupied by shops for craftsmen today - you can buy handmade wooden toys, glassware, dolls, and lots of other pretty things. 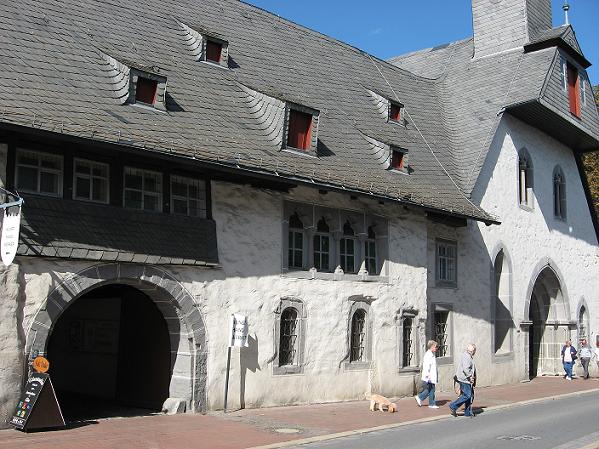 12th century hospice, outside view
Two brooks running through Goslar powered a number of mills in former times. One has been preserved and today houses the Tin Figure Museum which displays a collection of historical tin figures and a number of scenes 'reenacted' in tin, like battles and other historical events, but also a Mediaeval market and other more peaceful endeavours. The owner is really enthusistic about his hobby and showed me some particularly fine examples outside the glass vitrines. 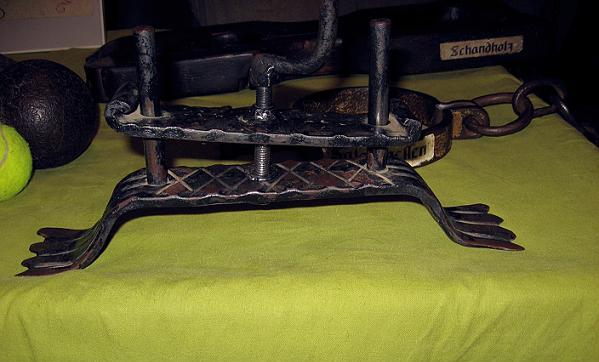 Thumb screws in the Late Medieaval Museum
Another interesting little museum hides in the Zwinger, the largest surviving tower of the town fortifications. It's a collection of late Mediaeval stuff, mostly weapons and torture instruments and you can actually touch the exhibits. It was a lot of fun.  ¶ September 18, 2008

Happy hunting in the Harz. The Heinrichs sound like quite a bunch. Escaping through a well, eh? Wonder of you can fit something like it into your fantasy series. :)

What beautiful buildings! And I like their windows, especially.

Personally I am quite taken with those roofs! Slate, laid on an angle. I am sure there is a perfectly good reason for doing it that way, I mean besides looking cool.

Well, there's a lot of wind and rain in the Harz, so I'm sure it has a practical reason, but I don't know the physics behind it.