18 Nov 2008
Slings and Big Stones
There's a Trebuchet Club thread on the Nano forums, open for all writers who have a trebuchet in their novel, in whatever form. It reminded me that I have some pics of trebuchets I took at Caerphilly Castle. 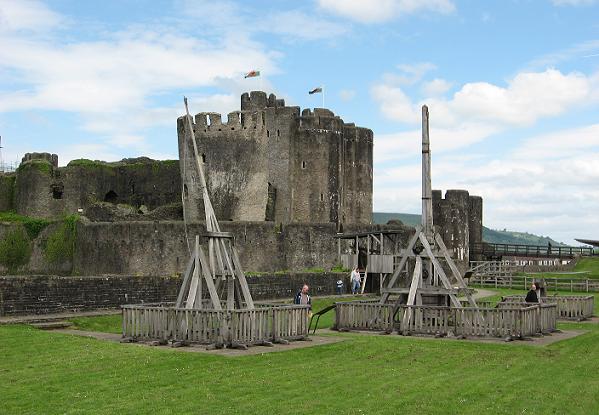 Traction trebuchet in the foreground, a counterweight one in the back

They're replica, on display on the south dam platform, part of the outer ring of fortifications. The big brother of the Roman ballista, trebuchets are basically giant slings that could cast rocks or later, iron balls, into the walls and roofs of a castle or town. Traction trebuchets work by human power, with several men pulling the casting bar down for one fellow to load the sling which was then released and would catapult the stone into a target - hopefully. 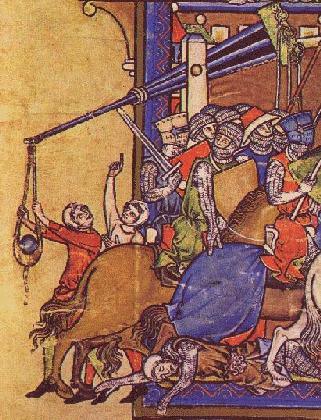 Traction trebuchet
A fine example for the traction trebuchet is this minuature from the Maciejowsky Bible (c.1240). I found the picture on this site, but it's pretty well distributed on the net.

Counterweight trebuchets had a box or basket filled with sand or small stones to make the pulling down of the throwing bar easier. One or two men could work the ropes running over a cogwheel, where it needed half a dozen at least with the traction ones. Thus, counterweight trebuchets could come in even larger versions. 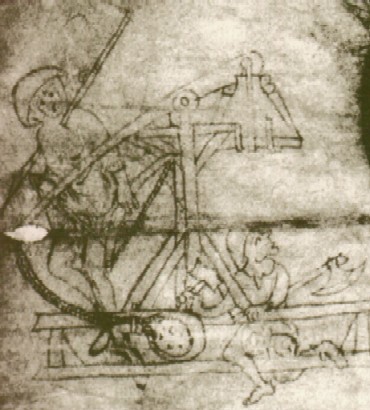 Example of a counterweight trebuchet
The picture is from the same trebuchet site linked above. Thanks to Alianore for hunting down info about that letter.
The above illustration is an example for a counterweight trebuchet, a drawing from an illuminated letter from Edward II's charter in Carlisle, describing an event from 1316 when the Scots under Bruce laid siege to Carlisle which was defended by de Harclay. It shows a number of interesting details, like a dead archer on the ground, which proves that the siege engines were pretty close to the castle. Also, the rope holding the counterweight was obviously cut for release - look what the guy with the hammer is doing.

I'm not good at physics; I leave that to Constance, lol. But the trebuchets, with their casting bars that held the slings up in the air, in front of a castle, make for some fine pictures. The Caerphilly ones are sometimes fired by reenactment groups. My guide book has a photo of several guys hanging on the traction trebuchet to get it down for loading. 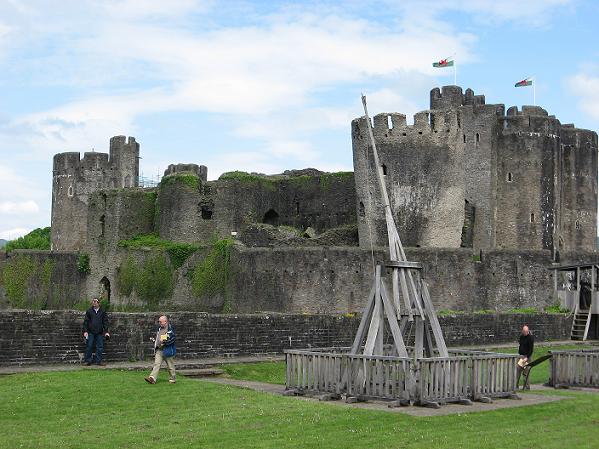 Another shot of the traction trebuchet
And yes, I'm probably going to have a trebuchet or two in Kings and Rebels. Though I'll leave the details to siege engineers, and none of my characters happens to be one.   ¶ November 18, 2008

Comments:
Haha, I love that picture on Got Medieval!

Afraid I don't know anything else about the letter on Edward II's charter. *Blushes*

It's a nice piece of Mediaeval humor. Bet that guy didn't pass Trebuchet 101. :)

Is there a way to hunt that letter down? The source on the site from where I filched the pic wasn't too specific.

Great pictures! Wouldn't want to be on the wrong side of one of those!

It would be interesting to see them fired at the castle. I hope Nano is going well and the plot bunnies are behaving.

Thanks Shelley. Unfortunately, the plotbunnies are not behaving at all - I'm working on the 'wrong' project. Well, it's my fault, I know Nano is not for me. And for the sake of my profile on the site, I count the words I get on the wrong projcet - after all, I did write them in November. ;)

Gabriele: as far as I know, Ed II's 1316 charter to Carlisle is held at Cumbria County Record Office, in Carlisle. Apparently (yes, I stirred myself and did some research! ;) the illuminated letter represents Andrew Harclay's defence of Carlisle against the Scots in 1315. Harclay was then sheriff of Cumberland, and held the city against an attack by Robert Bruce.

I want a trebuchet!...
Ahem... great shots, Gabriele. :) Sad to say, I have a mini desktop model, only good for paper wads, not cows and rocks.

Thanks, Alianore. I mentioned that siege and the fate of Haclay in one of my posts about Carlisle Castle. It's always nice when things fall into place like that.

Constance, take care that Anonymos doesn't find that mini trebuchet and uses it to fire paper balls at the Corgies. )

THanks for the information on these weapons, and the medieval humour. I will be referring to your site often after Christmas while writing the second book in my trilogy.

Gabriele, Anonymous is too busy maligning me - badly - in two different languages - badly, to worry about the trebuchet. Besides, he's an electrician. He could concoct much worse!

(Word Verif - muctes. Hey, stuff you can fling from the trebuchet!)

As you know, that's my dad's castle (the one he played in as a kid) so I've seen those things up close and personal. I wonder if they were anything like the seige equipment Alexander the great's army used?

Wynn, I think Alexander's siege engines were not as large, but the ballista works on the same principle as the trebuchet.

Trebuchets are terrific machines. Here are some instructions for building one on your kitchen table.

Cool pictures, I spotted quite a few plot bunnies in the first one.
I've nominated you for a blogging award over on my blog.
Have a great weekend.

I saw those trebuchets only a month ago. Did you see the video thingy that showed them in action in the exhibition? It was quite awesome.

And yes, I love that picture on Got Medieval too! And I've been seeing it everywhere ever since it was put up. It must mean something *looks around suspiciously for more omens*

By the way - my word verification is 'blogen'. Could we make a verb out of that? He/she/it blogend. To be be-blogen. *Goes away to take some more tablets*

Ann, trebuchets are too much fun to miss in Medieval-ish settings. :)

Lol, Lady D, that pic IS around indeed. Too bad I can't find an online version of one I have on the cover of a non fiction book. It shows a boar hunt and one brave fellow is busy climbing a tree - I'm sure that one would spread, too. :)

Actually they could be quite accurate; a well-constructed counterweight trebuchet could hit a man with one out of every three shots. The problem is that it's too much bother to construct such a huge appliance just to hit a single man--and once constructed, it couldn't be slewed around anywhere near fast enough to track even a baby crawling on all fours. Smaller and more maneuverable traction trebuchets were actually used to saturate the defenders' battlements with a barrage of stones, either to protect the larger trebuchets from "counterbattery" attacks or to keep the defenders' heads down during an assault, and these were apparently accurate enough to target specific openings along the crenellations.

Thank you for the clarification. I had seen a documentary some time ago and it took them a number of shots until they managed to hit the wall they wanted to hit so I thought it was not the best weapon if you wanted to get a good aim. Though once they had the wall within range, it crumbled after three good hits. :)

Ah, yes. That's exactly the problem with those trebuchets--finding the right settings to hit target the first time around. Once the range and lateral adjustments have been properly made, though, those trebuchets can shoot with pretty amazing consistency for a weapon so huge.