2 Mar 2009
The Ffwrwm
No, not an unknown prehistoric lizard or some mythological wyrm, but a garden in Caerleon. The name derives from the Latin forum, and with its craft shops, art gallery and restaurant the ffwrwm resembles an odd miniature forum cozily cuddled between the walls of an 18th century town garden. I found it by chance when looking for a place to have a lunch snack. 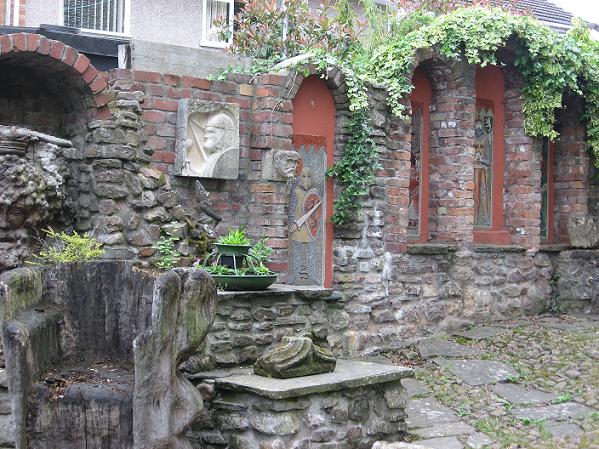 The Ffwrwm Garden in Caerleon, with one of Harrison's carved thrones to the left

The garden is a charming mix of shrubs and trees - most of the old and gnarled - antique statues, and modern art showing scenes from the Arthurian myths that are connected with Caerleon. The wood carvings, inspired by the Mabinogion, were done by Ed Harrison. There is also a metal statue depicting the final battle between Arthur and Mordred. 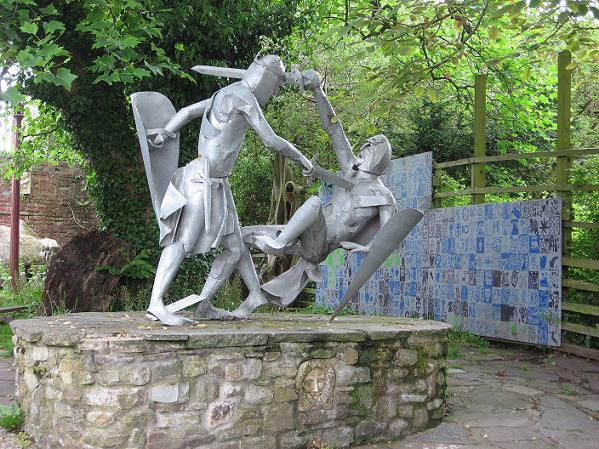 Statue showing the final duel between Arthur and Mordred
One of the attractions is an ancient life sized bull's head carved from stone. The bull was said to confer health, potency, wealth and prosperity; the reason it was an important animal in several religions and myths of old, from the Aegyptian Chapi to Mithras' bull sacrifice. 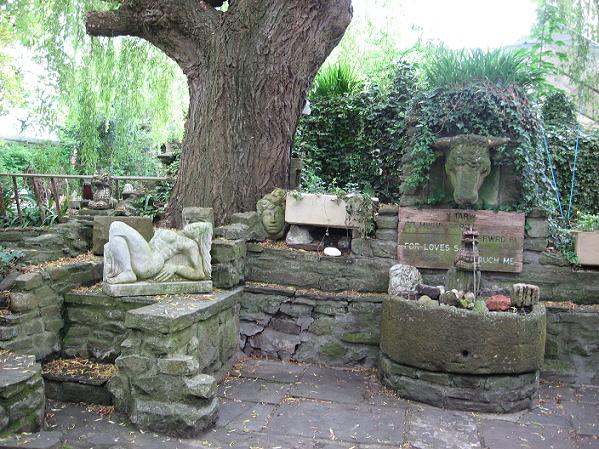 Another view of the garden; the bull's head is to the left
The ffwrwm also encloses the site of one of the former Roman fortress gates. Makes you wonder what they would have said to the sight of a legendary figure that might have been a Roman or half-Roman dressed in artistic late Medieaval plate armour.   ¶ March 02, 2009

Can I buy a vowel??
What is that behind the Arthur and Mordred statues? Ceramic tiles? What a neat area to explore. :)

Arthur and Mordred? WTF? Isn't Arthur supposed to be carrying a spear?

And, what on earth did the artist think that the shield is for? Shield should be upfront, locking downed guy's weapon.

Zornhau, Arthur is supposed to wield his sword Excalibur, I think, but you're right about the shields. Makes you wonder how he won 12 battles after obviously failing Defense 101.

What a marvellous place!

Malory:
Then the king gat his spear in both his hands, and ran
toward Sir Mordred, crying: Traitor, now is thy death-day
come. And when Sir Mordred heard Sir Arthur, he
ran until him with his sword drawn in his hand. And
there King Arthur smote Sir Mordred under the shield,
with a foin of his spear, throughout the body, more than
a fathom. And when Sir Mordred felt that he had his
death wound he thrust himself with the might that he
had up to the bur of King Arthur's spear. And right
so he smote his father Arthur, with his sword holden in
both his hands, on the side of the head, that the sword
pierced the helmet and the brain-pan, and therewithal Sir
Mordred fell stark dead to the earth; and the noble
Arthur fell in a swoon to the earth, and there he swooned
ofttimes.

Seriously, the legend is so multi-layered today that you can base it on Chretien de Troyes, the Mabinogion, Geoffrey of Monmouth, Malory and half a dozen others,and give him a spatha, a Norman bastard sword, a spear or even a pilum. I think the only weapon he never used was a battle axe. :)

I just love Welsh spelling! Did I tell you I once played scrabble in Welsh (and, no, I don't speak it - I just thought it would be fun - and I had a dictionary). I found it really difficult though because there just weren't enough of certain letters!

That statue is quite dramatic but totally unrealistic (i.e. the shield. Bt I suppose that's just artistic license ;-)

What an intriguing place, even if they have taken liberties with legend and common sense!

Taken liberties with history too...since neither Arthur nor Mordred were real.
(The only source I could find only said that they died, not whether the names referred to kings or for that matter, horses, dogs, or possibly hill forts. I lean towards the idea that they were hill forts myself. There's a story there...)

So many real kings of note which are overlooked. Count Eudo, Emperor Leo of Constantinople, Pipin II, and his son, Charles Martel, Emperor Otto (the great) King Beothoric all have wonderful stories behind them.

Somebody's gonna have to give these guys the publicity they deserve.

That being said, you have to love the idea of a whole garden devoted to a particular theme. No doubt I shall have to take good notes, and see if I can duplicate it on MY property.

Stag, I agree that every attempt to root Arthur and the other figures connected with his legend in history can only be a speculation, though I think if anything, the Romano-Britain angle seems the most plausible one.

Otto the Great and his father Heinrich the Fowler surely provide some novel material, but somehow the leading characters from the German Middle Ages don't get much representation in fiction, not even here - most of the novels deal more with the middle and lower classes (and the towns).

Looks like a great discovery on your part, Gabriele. Where did you end up eating?

In the restaurant in the Ffwrwm. :)