28 Jun 2014
Room Sharing, Roman Style
Hi, it's me, Aelius Rufus. Gabriele has taken an old post of me and added some of those little pictures and more information, so I have to retell a few things. I got to see the cavalry fort at Aalen which dates to the time of Antoninus Pius, and she thought it would be fun to compare the soldiers' barracks of the standard Hadrian's Wall / Limes forts to the cavalry ones. 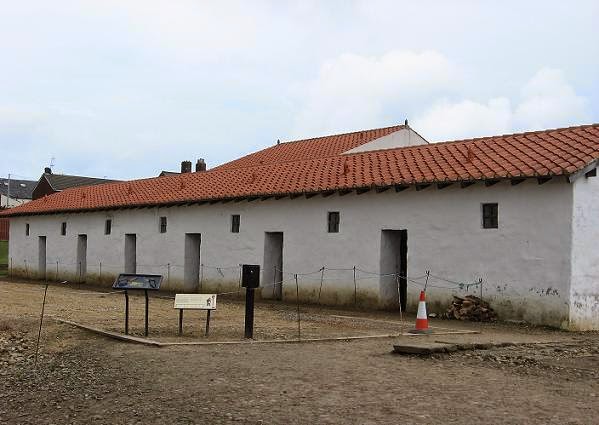 A reconstructed barrack in Arbeia

That's the place where my friend Gaius Fannius commands a unit of the 5th cohort of Gaul auxiliary, sometimes visited by the mysterious, time traveling Merlinus. Well, he's a centurion and gets some more space to his own.

One barrack has been reconstructed, though there were several, of course, depending on the size of the garrison. 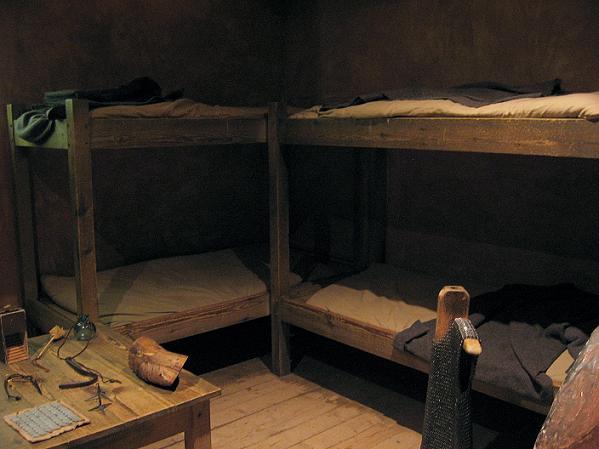 Interior of a room in a fort barrack (Caerleon Museum)
When I travel I usually get better places to stay than my living quarters in the Saalburg castellum. Thanks to Merlinus and the ongoing interest in Romans that leads to Rebuilding the Past projects, I can show you how our room looked. Pretty much like in the picture above.

Eight of us, called a contubernium, share a room of 15 square metres plus a little anteroom with shelves for our equipment, and a kitchenette. You see it's pretty dark and sparsely furnished - not that there'd be space for anything more than bunk beds, one table, and a few pegs in the wall. When on campaign, we also share a tent. 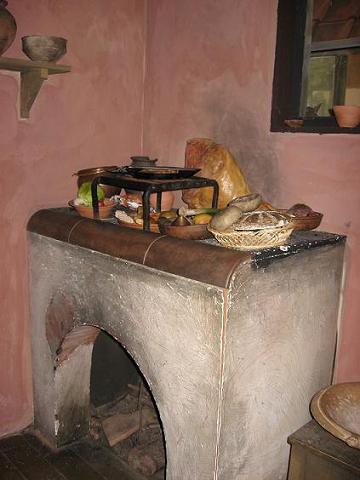 Oven for a contubernium, Caerleon Museum
Roman soldiers and auxiliaries don't have a central dining hall and no chefs (Asterix got that one wrong); we have to do our own cooking and can be glad if one of the chaps gets a bit of a hand for it. The ingredients, grain, beans, bacon, sometimes dried figs or other fruit and a bit of fish, as well as beer and wine are distributed by the command. There is always enough to keep us fit, but it's not roasted venison in a creamy juniper berry sauce.

Usually ten contubernia, a centuria that is though it only comes to 80 men, not a full hundred, share a barrack in the fort. Sometimes we get lucky and a bunch of the guys is commissioned elsewhere, like manning the mile forts and watch towers, accompagnying some tribune on some mission or whatever, and then we can spread out a bit more. The cavalry guys have more space, too. 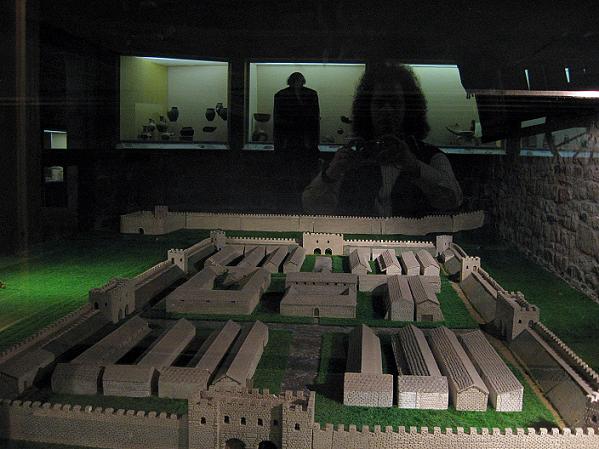 (Modell of a fortress in Birdoswald Museum. In the lower part you can see the barracks with the attached houses for the centurions.)

We're led by a centurion, and those guys don't live in such crowded and dark quarters. No, centurions are special and have their own house at the end of the barrack and slaves to cook for them, and us poor soldiers to clean their armour.

Yes, dear Gaius, you know complaining about the centurions is part of the job. 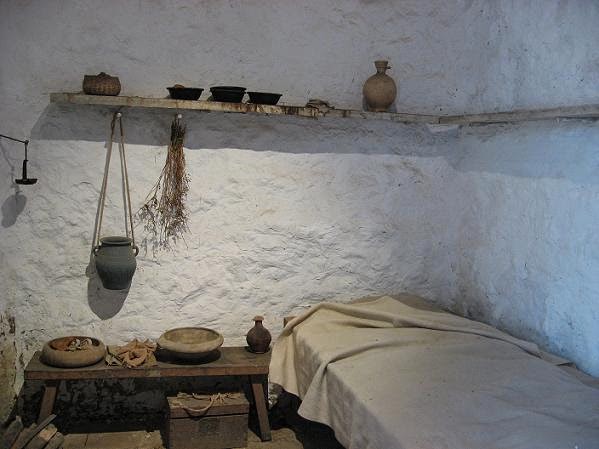 Bedroom of the centurion, Arbeia
They also get ten times the salary we get. It's a damn injustice - invented by Augustus, I've been told. He wanted a gap between the ordinary soldiers and the officers so the army wouldn't stick together and turn against him or some such. And indeed, when there were mutinies like the time Tiberius became Emperor while the legions prefered Germanicus, it was the centurions who got killed during the mess, and in the end the mutiny came to nothing and Tiberius stayed put. 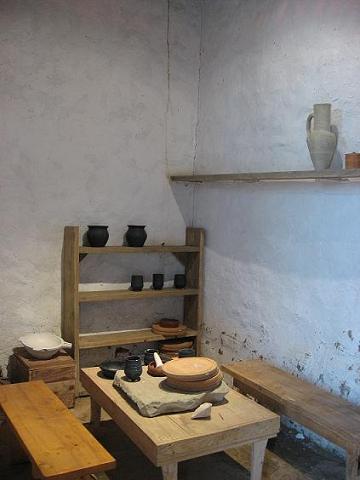 Anteroom to the bedroom, Arbeia.
The centurion's anteroom was larger and also used as office.
There was another good thing to being a centurion, Gaius Fannius told me. He could order some of the guys to slap a fresh layer of paint on the walls of his rooms in Arbeia. The reconstruction needs a house makeover; it gathered a fair bit of dirt and cobwebs.

Yeah, I could try to rise to the centuriate - I'm a Roman citizen thanks to my father - but I'm not sure I really want that. I doubt I could have so much fun traveling around when I had the responsibilty for some 80 lads. No way I could claim the whole lot as personal guard and take them around with me. 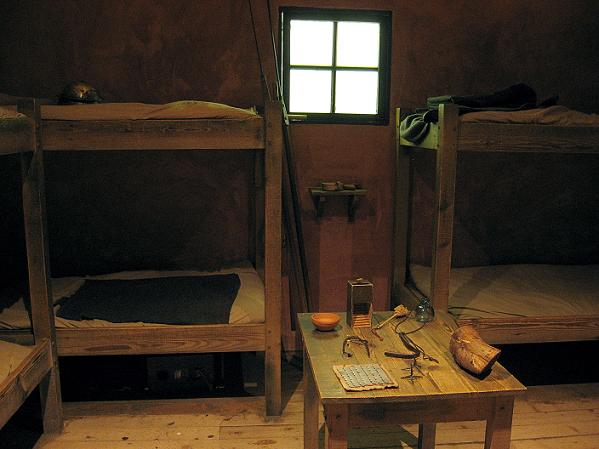 Bunk beds like above is the most common layout, but sometimes barracks had kings size beds for four like in the image Gabriele captured with her little picture box below. Even worse, if you ask me; I prefer the bunk beds. Especially the way Gaius Incitus keeps trashing around at night, dreaming of fighting Germans. I don't want to get his arm in my face. Creating an earthquake in the bunk bed is bad enough. 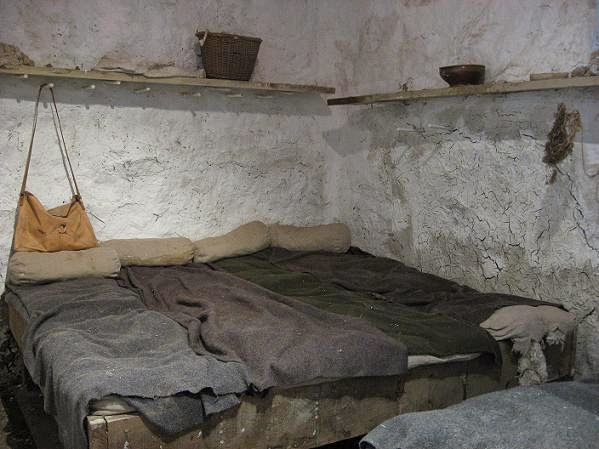 Soldiers' quarters in Arbeia
But now I must go and fix the hobnails on those damn sandals. I swear they'll use lost nails to track the ways of the Roman army one day. *

Oh noes, Crispus and Buccio are playing at dice again. Which means the rest of us can listen to Buccio complaining that he's lost a weeks worth of pay. Again. He should know better and not play against Crispus, that man has some uncanny luck. 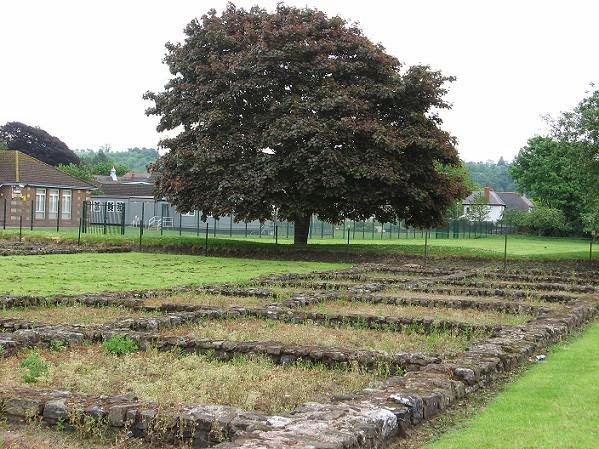 Barrack foundations at Caerleon
* They have in fact done that in Hedemünden where those nails mark the way from the south to Hedemünden Camp and the further route north on the hills along the Visurgis valley. A smaller camp (sort of a mile castle) also was discovered along that way. Sandal nails also helped showing the way the Romans retreated after the battle at Kalefeld.  ¶ June 28, 2014

Comments:
I wonder if they had problems with snoring room mates? That's interesting about the nails. A couple of the photos didn't load for me for some reason.

Shelley, I bet they had.

That's odd, I can see the photos fine. Anyone else got problems?

Sounds more like Crispus has dodgy dice, if you ask me. :)

Love that detail about the hobnails!

Yeah, I have my suspicions about Crispus' dice, too, but he'll get away with it until I find out what the punishment for using dodgy dice was. ;)

Lol. Great post - glad I don't have to live in those conditions!


I suspect the entire Century will swear to the Centurion that they do not know why Crispus was walking along the battlements with blanket over his head when he took misstep. And the Centurion, will accept that story.

I think Rufus, in a plea for sympathy ,is not letting on to the whole story. Except in war the Army was seldom recruited to full strength, most of the time there would only be four to six soldiers living in a room. And some one would be on duty so the whole contubernium would seldom be present at once. And it is probably more weather proof than he could have had as civilian. It does make those temporary WWII barracks that were used for the next forty years look good.

Wonderful shots and details--you can take photos in the museum? I love visiting the Greek and Roman exhibits at the old Getty Museum in Malibu, but they don't let you take photos! d:(

Dayya, it depends on the museum. Some will allow photographing without flash, and sometimes my charming smile has an effect on the guards. ;) But I have also encountered situations where I could not take pics.

Enjoyed this article immensely. Thanks for posting.