25 Sept 2009
The Defeated Varus
Der gescheiterte Varus is the title of a 2.30 m bronze statue in Haltern am See. It was created by Wilfried Koch in 2003 and shows Varus at the moment of his defeat; the legions lost and maybe the province Germania as well, Arminius whom he trusted turned traitor. 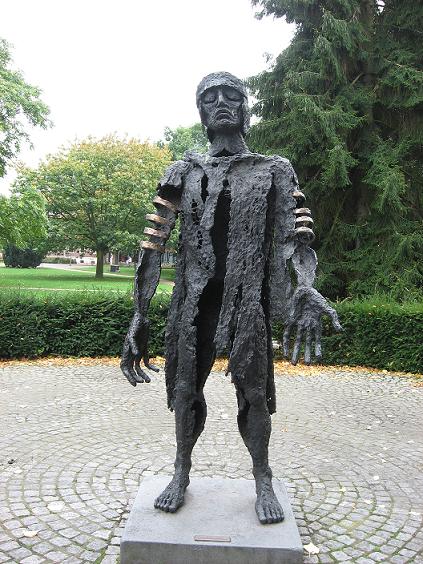 Wilfried Koch (born 1929) is a German artist and art historian, and member of the European Academy of Science and Arts. His book about 'European Architecture from Antiquity to Present Time' (1982) has become one of the standard books about the subject and was translated into 20 languages. He added a great number of his own pencil drawings as illustrations.

Koch has painted more than a thousand portraits and since 1982 works mostly in sculpture. His bronze statues, created in wax melting technique, have become famous for their strong facial expressions and their over-large hands. Body and limbs are shaped of open shells. Most of his statues portray figures from mythology and Christian iconography (Lilith, Eva, Franciscus, Prophet, among others)

I admit I'm not much into modern sculpture, but the face of Varus' statue did impress me. You have to see it live to fully appreciate it; there is so much hopelessness and emotional pain - you can almost hear him say, "why, Arminius, why?" 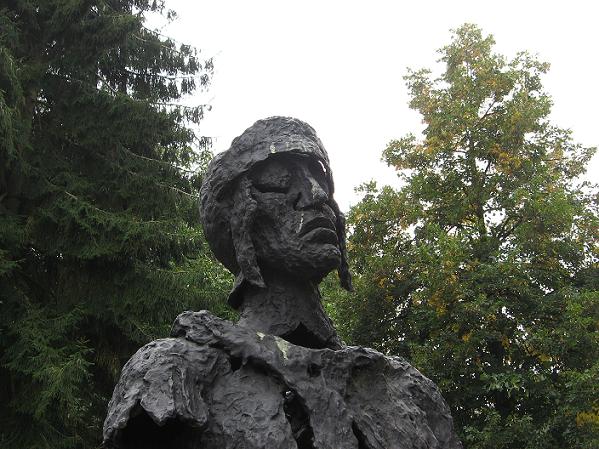 Closeup of the head

Wilfried Koch says that he creates sculptures of humans in emotional and existential borderline situations, and that he wants to stir the beholder into responding with his own emotions and thoughts. The strange thing is that once you get used to his style and the 'rough' look, it works. 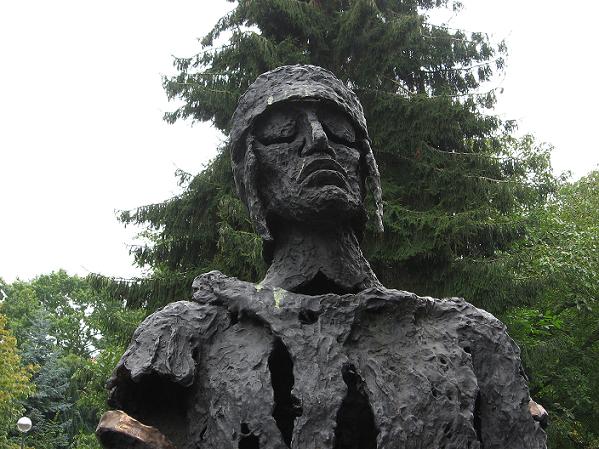 Closeup of the face from a different angle
When I walked towards the statue, situated in a little park outside the town centre, my first reaction was, oh dear, another of those odd looking modern thingies. But then I stood a while and looked into Varus' face. Spellbound almost.
Read more! ¶ September 25, 2009 6 comments

18 Sept 2009
Much Fun Was Had
I'm back from my visit to the Romans in Haltern am See. The exhibitions are great, and I was glad to have stayed long enough to do both of them justice and not rush through in two hours. I took a lot of photos, but the conditions were more than tricky and I suppose I'll have to count for at least 10% blurred pics this time. But some turned out fine; here are a few samples: 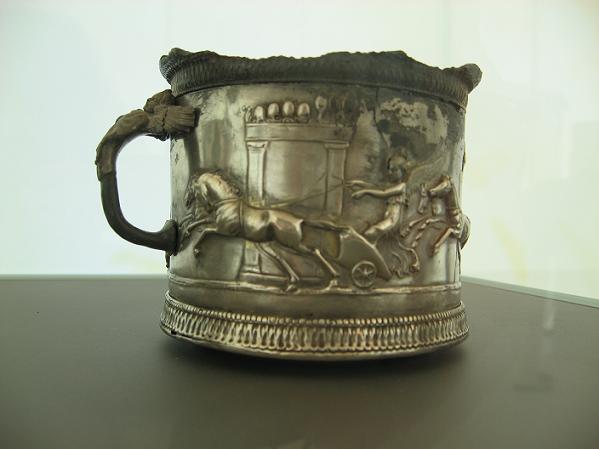 Cup from a set of silver ware
This one - showing a chariot race - and several other pretty cups were part of the Roman Lifestyle section in the special exhibition 'Imperium' in the Seestadthalle (Lakeside Town Hall). The level of craftmanship of those luxury items is amazing. 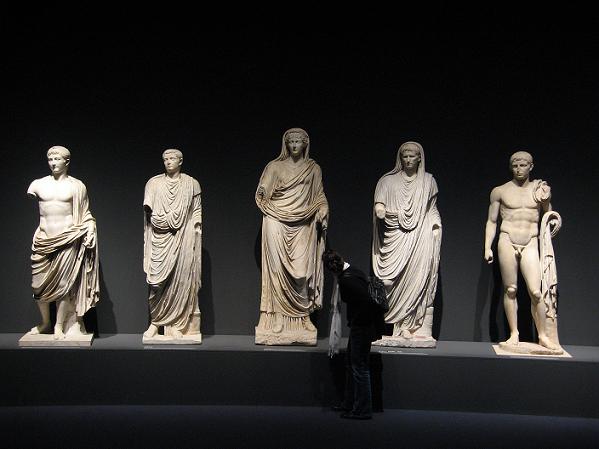 Statues of some members of the Imperial Family
From left to right: Germanicus, Tiberius, Livia, Augustus, Agrippa Postumus (a grandson of Augustus who died early). Augustus wears his toga with a fold of cloth over the head, signifying his role as priest. Poor Claudius has been left out of the family portrait again. 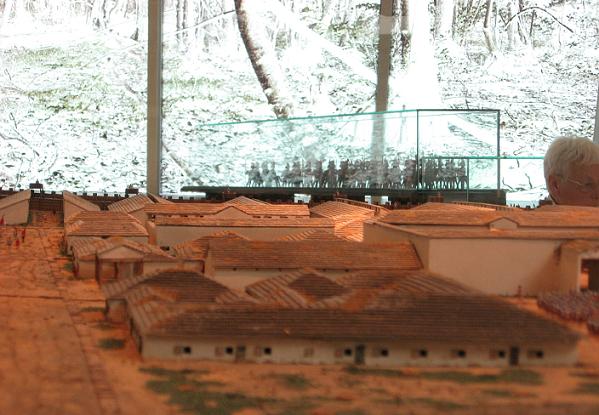 Closeup of the model of the fort at Haltern
One of the interesting features of the permanent exhibition in the LWL Römermuseum (Lippe-Westphalian Roman Museum) are several models ranking from the complete fort in Haltern to a single barrack. In the background of the photo you can see a display showing a column of mounted playmobil Romans. There were three legions worth of the little figures all over the place. 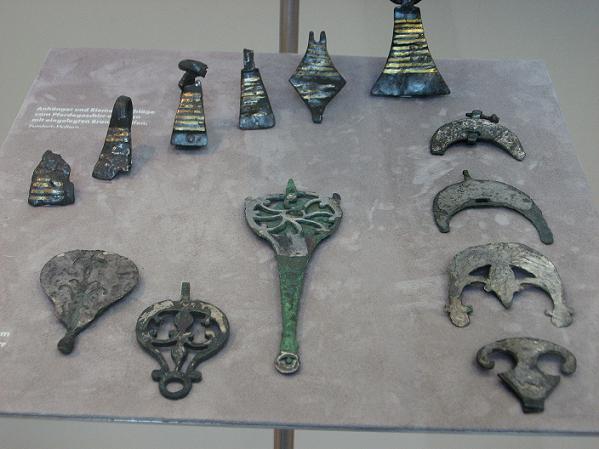 Parts of a horse harness
Central part of the museum is the Roman army. This exhibition, showing all the finds of Roman origins along the Lippe river where the Romans had a number of forts and marching camps, is statuary in Haltern, though it has been expanded with some additional displays during the duration of the Varus Battle Anniversary events. 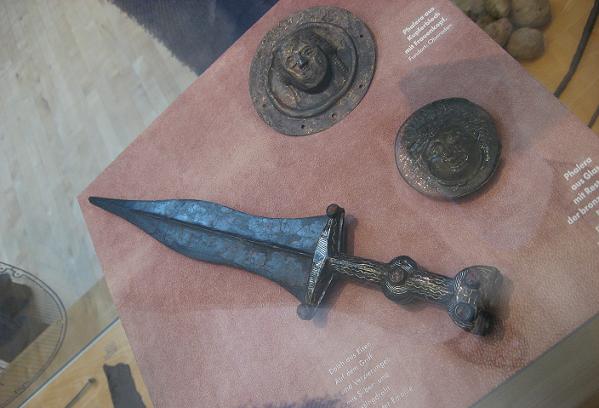 Roman dagger
Army life of course, includes all sorts of weapons, and you know I can never resist a pretty pugio (even from an odd angle). With all the photos I took in various Roman-themed museums, I now have an impressive collection of virtual weapons, armour and horse equipment. 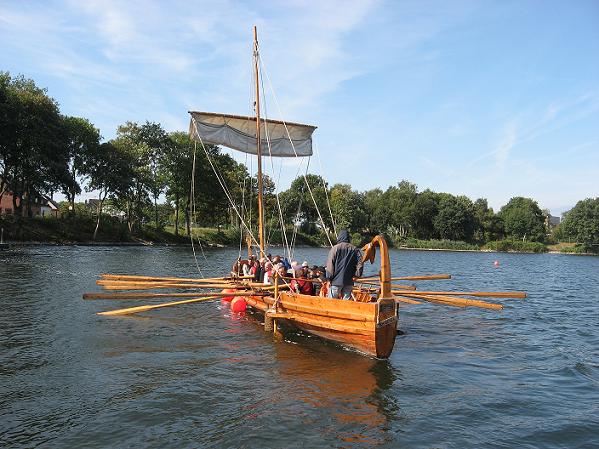 The Victoria, a reconstructed Roman ship
This one was really fun. Not only was I lucky to see the reconstructed Roman ship Victoria (modeled after a find from the Danube) close up, I also managed to join in rowing her around on the lake for an hour. Not an easy job, but it can't get much more Roman for a geek like me.
Read more! ¶ September 18, 2009 10 comments

13 Sept 2009
Gone Fishing
I'll be off for a few days hunting Romans in Germania again. With the Battle of the Teutoburg Forest celebrating its 2000 year anniversary this year, there are exhibitions not only in Kalkriese, the assumed battlefield location, but also in Haltern am See, the location of a Roman fort that was abandoned after the defeat. Besides a long standing display in a museum on the site of the fort, there's an anniversary exhibition as well that is said to be very good.
Read more! ¶ September 13, 2009 7 comments

7 Sept 2009
Wallace Views
There's one man you can't escape in Stirling: William Wallace, the 13th century Scottish hero who probably would love the idea of time travel into the future, so he could have a few words with Mel Gibson about that Braveheart movie.

The main reason for his popularity as tourist attraction is because of this. OK, you'll have to take a close look, but that spiky thing on the hill in the middle of the pic is the Wallace Monument. 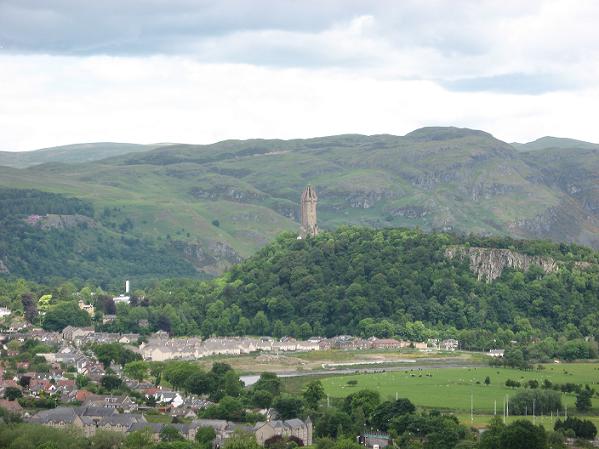 Wallace Monument, seen from Stirling Castle
The hill is called Abbey Craig, and it's said to have been the place from where Wallace watched the gathering of Edward I's army before the battle of Stirling Bridge in September 1297. Wallace won that battle, which is one of the reasons for his popularity - defeating Edward I counts as something. After the battle Wallace was proclaimed Guardian of Scotland, though I don't think there's an exact job description anywhere. 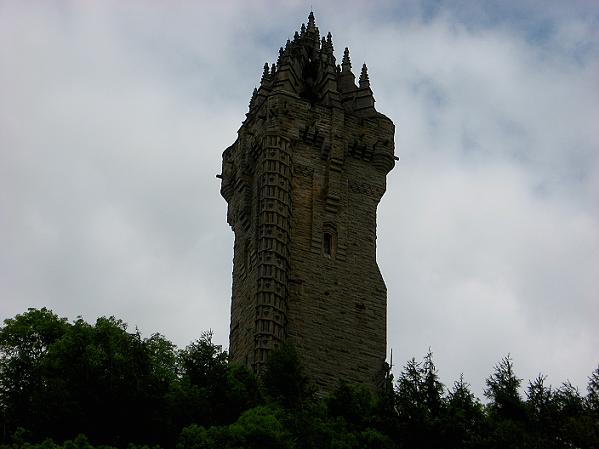 Wallace Monument, near Stirling
This picture of the monument looks pretty dramatic; an effect you'll get when photographing objects against the sky. And the Scottish sky is prone to be dramatic all in itself.

The monument was constructed in the wake of a resurgence of Scottish nationalism in the 19th century (1), based on a fundraising campaign that yielded £18,000. The 220 feet high sandstone tower was completed in 1869 to the Victorian Gothic designs of architect John Thomas Rochead. There's a museum inside. 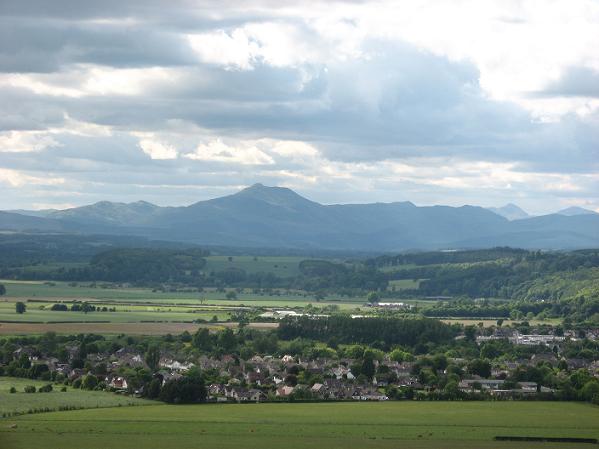 View from the monument towards Stirling
There was still some time left after I visited Stirling Castle, and I decided to see the Wallace Monument. The official guidebook said it's open until 6 am but when I arrived at the foot of the hill, it turned out opening time was only until 5 am. Well, I climbed the hill anway because the terrace in front of the tower offers a great view over the surroundings, but I miissed the exhibition (and climbing 280something stairs, lol). 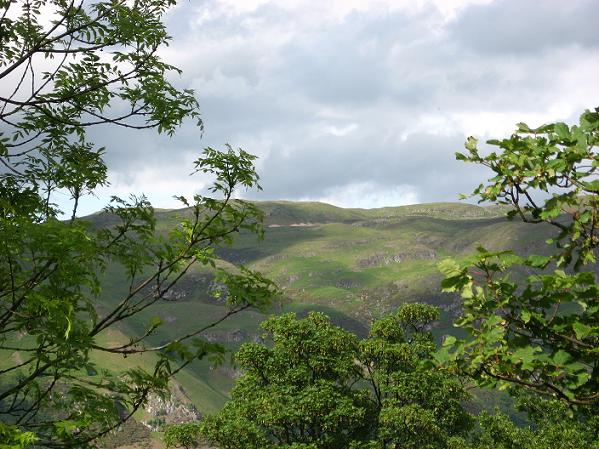 View towards the Highlands
The view was worth the climb, though it was the first time I regretted not having brought my trusty walking stick (I would regret it several more times in the days to follow).

I got a Historical Scotland booklet about William Wallace I bought ten years ago, and Nigel Tranter's novel is on my TBR pile, so I may come up with some information about the man that are a bit more historical correct than Wallace having sex with Queen Isabella three years after his death. ;) 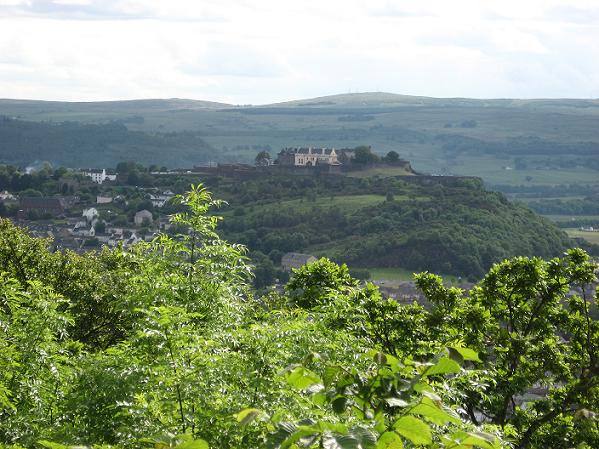 Zoomed in view to Stirling Castle, seen from the Wallace Monument
In the evening light only the renovated hall can be distinguished by its yellowish stone, the grey walls beneath almost merge with the landscape.

(1) Nationalist revival spread all through Europe at that time. The German Hermann Statue celebrating Arminius' victory over Varus dates from the same era. Let's hope Gibson never finds out about that piece of history.
Read more! ¶ September 07, 2009 19 comments

2 Sept 2009
Weather Patterns
This summer could be classified as crazy, but following a pattern - at least in Germany. It goes like this: 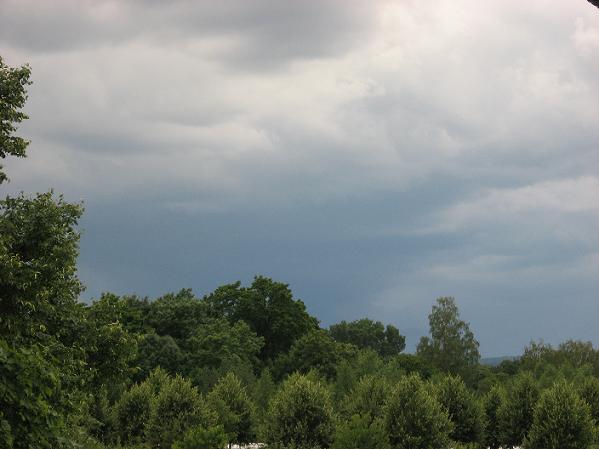 Thunderstorm clouds
At least it makes for an interesting sky sometimes. Here's one of those big fat thunderstorms coming in from the south-west (their favourite direction). 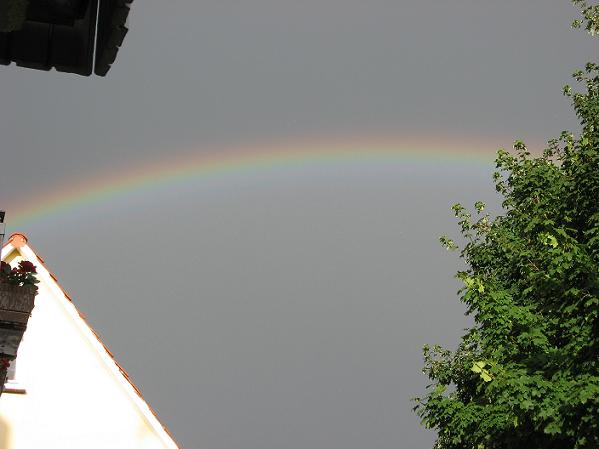 Rainbow
Sometimes there are rainbows when the storm moves east and the sun comes out again; a constellation that happens mostly in the afternoon. 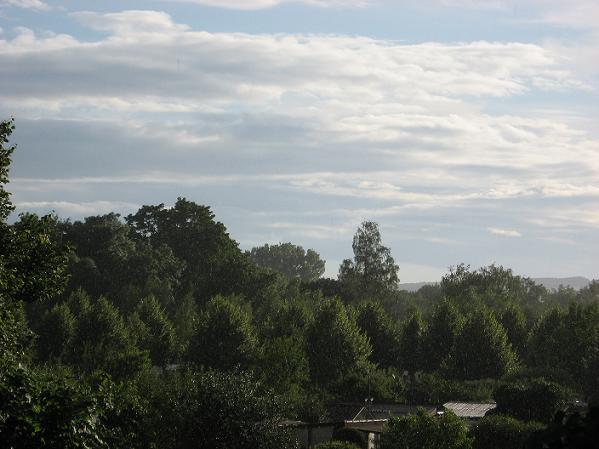 After the storm
And an hour later the sky looks as if it never did anything bad.

But since this fun is going on more or less since I returned from Scotland, I could do with some different weather. What about a few not too hot but sunny days in a row?
Read more! ¶ September 02, 2009 6 comments