29 Nov 2009
Summer Days in Oban
With all that rain and too warm wind these days, some sunny pics should brighten the spirits. And I found the sun where rumour has it you can seldom find it: in Scotland, back in June. The first photos show the view from my room in the B&B in Oban. 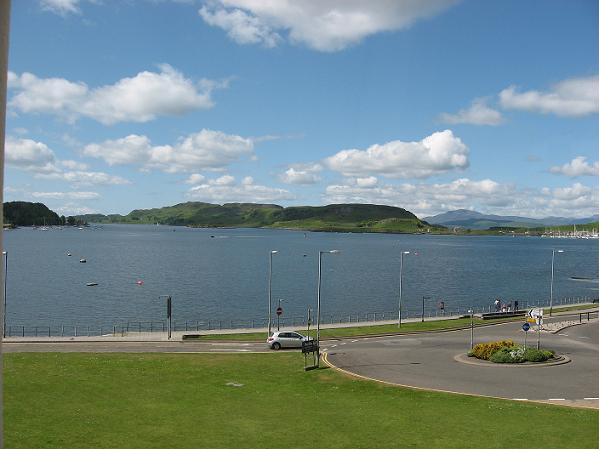 View from my room in Oban

It was one of those small family run B&Bs in an old Victorian house, with the tiniest sink I ever had (I assume the bathroom was added to the room at a later time). The atmosphere was very nice, and the view from my room spectacular. Got some yummy breakfast, too. The neighbouring house had a pub - nothing better than a cool ale after a day out. 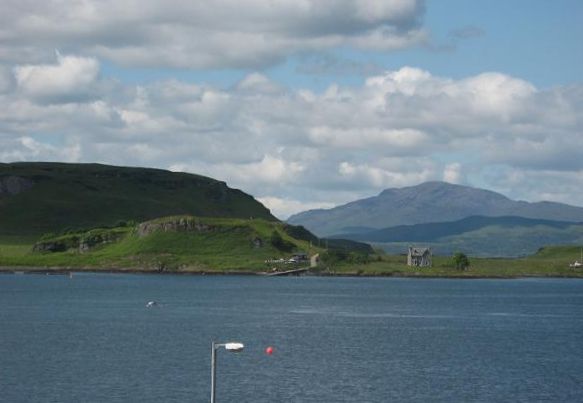 View from my room; zoom in to Kerrera
Oban (meaning 'little bay' in Gaelic) lies at the centre of a bay that is protected from the worst Atlantic storms by the islands of Kerrera, Lismore, and Mull, as well as the granite mountains of the Morvern peninsula. A situation that today makes Oban the 'gateway to the Hebrides' because of its large ferry harbour. 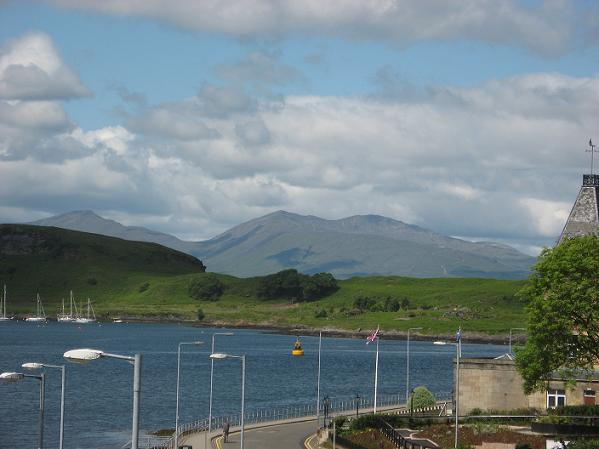 View from my room; a different angle (with the mountains of Morvern in the background)
Oban, the inofficial capital of the West Highlands, has a resident population of 8.500, but during summer it can be crowded by up to 25.000 people. Makes me want to go back in winter. The town has been a popular holiday destination since Queen Victoria called Oban, 'one of the finest spots we have ever seen.' The scenery of the town and the Inner Hebridean islands - esp. Staffa - gave inspiration to a number of artists. 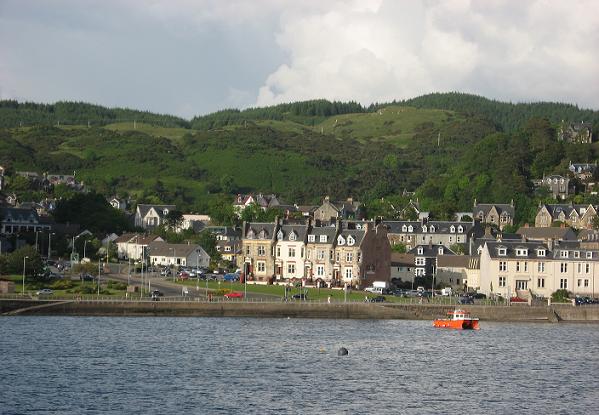 My B&B seen from the Mull ferry
My B&B is the second house from the right of the four Victorian ones in the centre of the photo. Pretty place, isn't it?

One of the many things I love about the Scottish Highlands are the white nights of summer where you can sit outside past midnight and it's still not dark. The pub I mentioned had seats outside from where you could enjoy the summer twilight on the water. 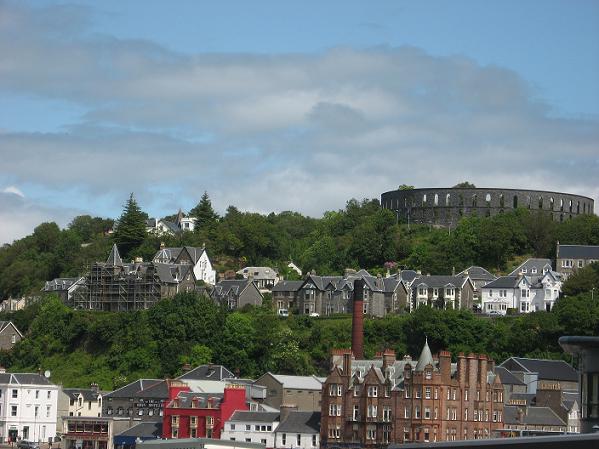 Oban with McCaig's Tower, seen from the Mull ferry
McCaig's Tower, better known as McCaig's Folly, is a building that looks a bit like the Colosseum in Rome that inspired it. It was commissioned by John Sturart McCaig, a rich banker in 1897, for the purpose of giving the masons of the area work during the winter months, and also as a lasting monument to his family. It has two tiers of lancet arches and a circumference of 200 metres. A museum and other additions were planned but never built after McCaig's death in 1902. 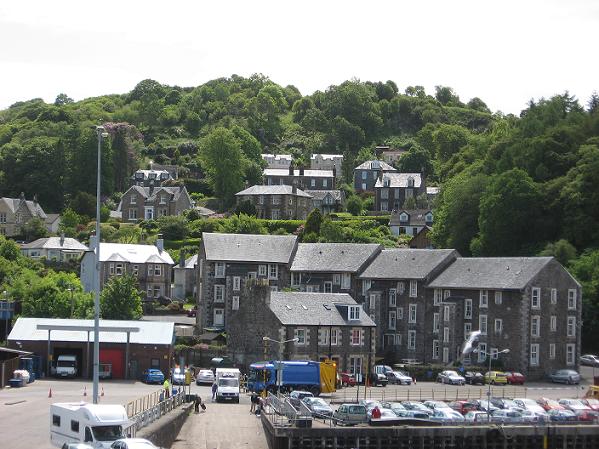 The hillside of Oban, seen from the harbour
Oban was a small fishing village until in Victorian times a steamer linked to it from Glasgow, and the upper classes started building houses there to spend a few summer weeks away from London. Can't blame them; Oban has developed into a pretty town with a number of nice walks, fe. along the Esplanade at the seaside. 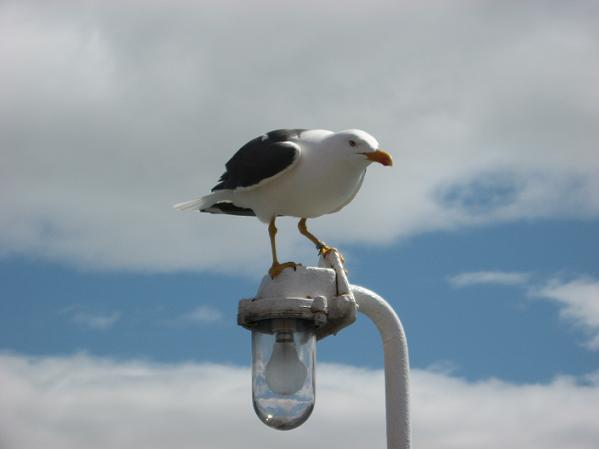 A blind passenger on the Mull ferry
Here's another of my gull shots. I never could resist a chance when one of them sat still long enough - which didn't happen often.

Another aspect I love about Scotland is the sky. It's never boring and displays some of the most fascinating cloud formations I've seen. Just look at the photos for some of them, lol.  ¶ November 29, 2009

Comments:
Wow, I think these are some of my fave pics of yours. Love the views over Kerrera (I think that's where Alexander II died in 1249) and your B&B was in such a great location!

Thank you for such a lovely and fantastic blog. I'm an avid Scotlands-traveler myself (or at least I'd like to consider myself so) and wish I could be there every year. Your blog gives me a chance to relish in the beauty and mystery and friendliness of the land in between though - a good way of 'holding out' :-)

thanks so much. I've immediately recommended this blog to my friends who share the same passion and love for 'lost forts' ...

So true about the skies too. I need more Scotland time. But Spain really ought to come first...

Alianore, the whole Scotland tour was great, but the days in - and around - Oban were my favourite time. It's such a lovely place.

Hi C.R., welcome to my blog. I'm glad I can give you and your friends some images and memories with my photos and posts. The Lost Fort goes back to the title of a planned novel (currently shelved) that had changed so much the title no longer worked, so I used it for my blog. You'll come across a few Romans here now and then. :)

Jonathan, there's plenty of history in Scotland as well. :) But I like your photos from Spain, so another trip to get more would be nice.

What a beautiful place - although I suppose the sunshine helps. And not many guesthouses have rooms views like that! Great seagull by the way - I actually like seagulls - well, when they aren't stealing my chips anyway ;-)

Lady D, the sunshine did help, though even that rainy morning had some atmosphere. Just don't want that every day. ;)

Seagulls are fun to watch, though yep, eating prawn sandwiches in the harbour does get you some avian attention.

Nice to see the sunshine, and water. For the record I did NOT immediately start devising a way to build a bridge...

Gorgeous photos. The light in the West Highlands has an almost magical quality. I do like the seagull with his beady eye. Was he eyeing up your picnic?

Lol, Constance, somehow bridges are not that pouplar at the west coast. The only larger one is the brdige that connects Skye with the mainland.

Hi Cioara, welcome to my blog. I can only guess at Romanian (I have some French and Italian), but I understand you like what I post. Thank you.

Carla, I didn't have picnic, but some other people had cookies. I bet gulls won't mind a change to the fish. :)
And yes, the light is magical.