22 Jan 2010
Roman Leisure Centre Caerleon
So, that's where Aelius Rufus whom we last met in Segedunum, is hanging out these days: the baths - or better to be called a leisure centre - in Caerleon legionary fort. "Greetings, Aelius. How do you manage to get so many holidays?"

Aelius grins. "It's called research trips. Well, look at that weather, a nice, warm Roman bath is the best place to be these days."

Gabriele: But you're from Raetia, you're used to frost and snow.

Aelius: Sure, but it doesn't mean I can't appreciate civilisation. And these baths are really impressive. You've seen your share of baths in forntier fortresses that usually hold a cohort. Caerleon can house ten times as many soldiers, and those baths are huge. 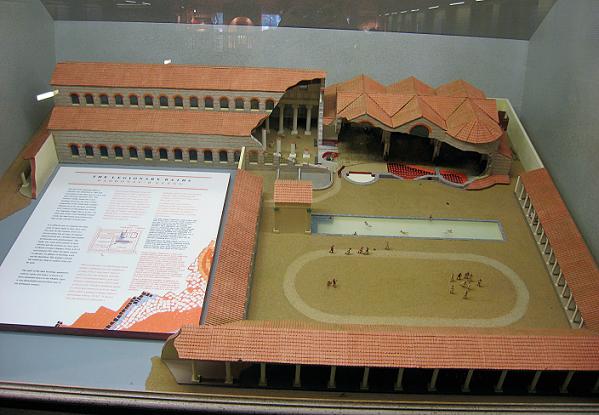 Model of the Baths as they may have looked

G. They are. Remind me a bit ot the Imperial baths in Augusta Treverorum. And like in Trier, as it's now called, not much is left of the baths.

A. That's a pity. Why don't you dig them out? You people from the Future love that.

G. We do. The problem is that people built a town over the Roman remains at some point, and you can't tear the houses down in order to dig up more Roman stuff. Though I'm sure people would find interesting things in their cellars if they poked around with a shovel a bit. 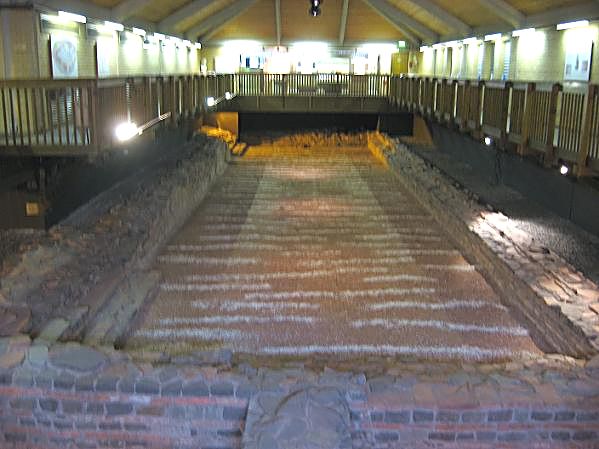 The excavated part of the outdoor swimming pool
(Today roofed in to protect the remains)
G. The visible remains of the baths in Caerleon are only a part of the entire complex. For comparison of the model size, the swimming pool is 42 metres long, that's close to the 50 metres standard of today.

Aelius sinks deeper into the warm water pool and wiggles his toes. "So, what remains are left in the future?"

G. The features that have been excavated and conservated are half of the outdoor swimming pool (natatio), and the cold bath (frigidarium, part of the building in the upper right of the model above, the one with the cupola roofs). The great basilica to the left has vanished, as have the colonnades that sourrounded the palaestra yard. The swimming pool is covered with a roof today, and part of the museum. 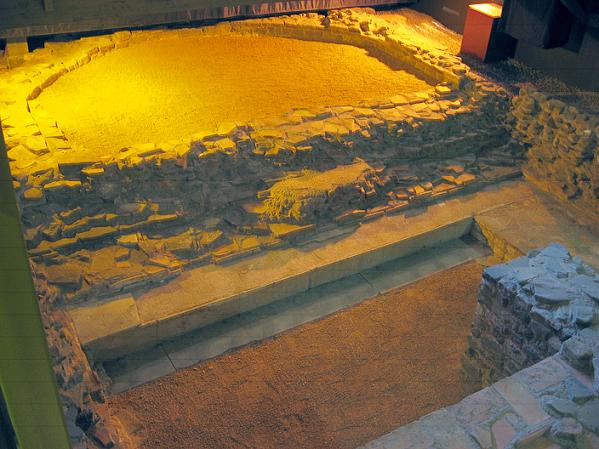 Remains of the cold bath
A. That's a pity about the basilica or exercise hall. It is larger than the exercise hall in my home fortress Saalburg and very beautiful. A welcome place to train on cold days when the outdoor training facilities are too uncomfortable. Look at them right now, just lots of damn mud, partly frozen.

G. Yeah, that's a British winter for you. Mud and rain. The photos of the baths in Trier give some impression of the dimensions of such a building.

A. Heh, I bet the baths in Augusta Treverorum were even fancier. Emperors like it fancy for the most. Except our friend Tony, he's more the practical sort. Well, and you people from the Future can tell how the baths may have looked from a heap of stones?

G. With some imagination, yes. And there are books with drawings, models, and some fun features like the curtains here that indicate the places where pillars have stood. 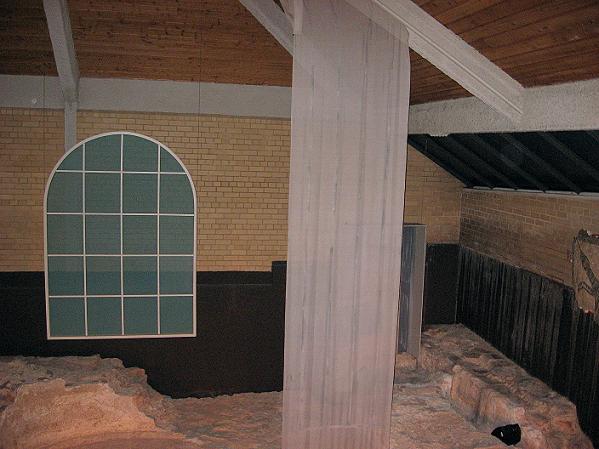 Caerleon Baths, visual display
A. Nifty. I really like those lights that work with ... what did Merlinus call it? Electricity? But why is this tablet written in two languagues? One looks like that barbarian dialect they speak here only with too many d and l, the other is an odd mix of Germanic and badly misspelled Latin words that makes no sense.

G. Oh, that's English. It is an odd mix of a language indeed, but it does make sense. The other one is called Welsh.

A. Well, I'm glad I don't need to learn those; Latin was bad enough.

G. Can't blame you. Sometimes I suspect the Romans have come up with some really complicated grammar only to annoy the people who have to learn it.

"Boy did they ever," Aelius said in his best imitation of soldiers' Latin drawl. 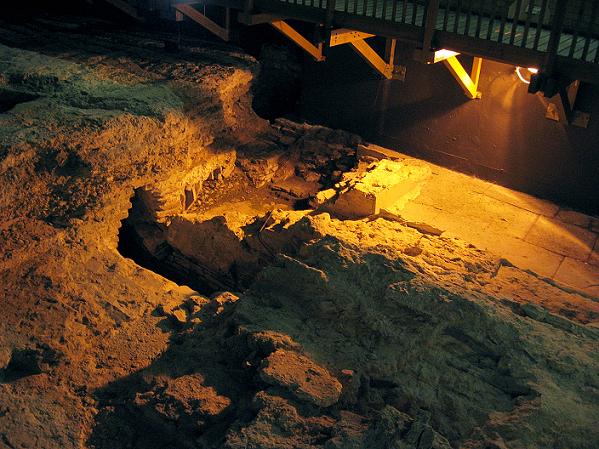 Caerleon Baths, floor level with part of the hypocaust ventilation
"So," Aelius continues, "you got something more you want to show your Future friends? I hope you won't chase me over to the arena in that weather."

G. Don't worry, we'll wait for the rain to stop. So there's nothing more today, but I have a reconstructed Roman river patrol ship in my archives.

A. Oh fun. I've been on one, but my shoulders didn't like it much.

G. Heh, nor did mine, but it was worth the effort.

Comments:
I love these pictures of the baths! It gives me a real sense of what it must have looked like. Great job!

Wow, that swimming pool is great! And Aelius Rufus is a really cool guide. ;)

Neat! I want models like that.
Every time I read about the baths, I think the Romans were a lot more civilized than we are. Or social. Or both. :)

Thank you, Meghan, Alianore and Hank.

Constance, the great villas had baths of their own, but the military forts had common baths, and in Imperial times an increasing amount of them was built in the towns for the less well situated populace who had to live in insulae. The baths were free or dead cheap, so pretty much everyone could afford visiting them regularly.

Thanks, Carla. Yes, Aelius Rufus is very busy having holdays .... helping with my blog. *grin*