14 Feb 2010
A Scottish Wedding
A special version for that Hallmark and Fleurop day, February 14th. *grin*

Lachlan Mhór MacLean's own marriage seems to have been a happy one. Neither did he need to kidnap his future father-in-law to get the bride, like another Lachlan MacLean in 1367 when he fell in love with Mary, the daughter of the Macdonald Lord of the Isles. Nor did he maroon his wife on a rock in the sea, as was the fate of Catherine Campbell, wife of the 11th MaclLan chief (see here).

No, Lachlan fell in love with Margaret Cunningham, daughter of William Cunningham Earl of Glencairn, while he stayed in the house as guest (not as hostage, for a change). Margaret obviously was quite taken with the handsome young Highland chief, and her father agreed to the marriage which took place in 1576. King James VI may have been miffed, though, because he had arranged for MacLean to marry the daughter of the Earl of Atholl. 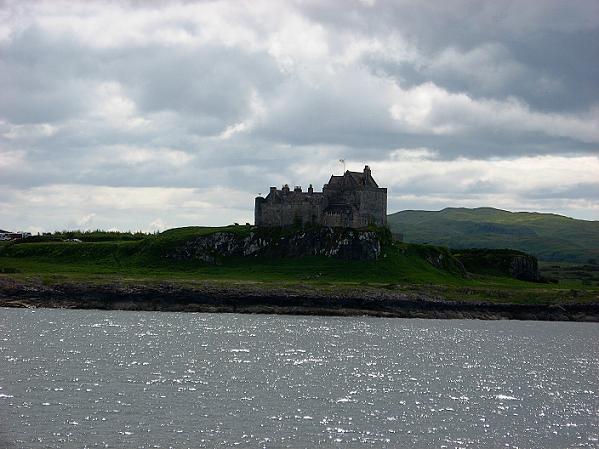 The silhouette of Duart Castle, seen from the ferry

A less happy fate befell MacLean's mother. She was the sister of the Earl of Carlyle and had a fortune in her own right, which made her a desirable match still. One of her suitors was John MacIain of Ardnamurchan (alternate spelling MacIan), a smaller clan related to the Macdonalds. Obviously, Lachlan MacLean hoped to break the Macdonald alliance by allowing the marriage of his mother and John MacIain to take place, though the MacIains of Ardnamurchan had a lost a lot of power to the Campbells at that time and were not the biggest fish in the pond of MacLean's enemies.

I could not find out anything about John MacIain, and I can only make a few guesses about Lachlan's mother. Maybe my genealogist readers can find more with what little information I can provide.

Lachlan was born in 1554 and had at least one surviving sister (who married Angus Macdonald and ended up in the middle of a fierce feud between her husband and her brother). MacLean's heir apparent was a cousin, Allan MacLean of Morvern, so there seems to have been no further surviving male offspring. One can assume that the lady was something between 16 and her mid-twenties at Lachlan's birth, which would make her between 50 and 60 at the time of her third marriage in 1588. I don't know how old the bridegroom was; a man of her own age, or a trophy boy bought with her money. 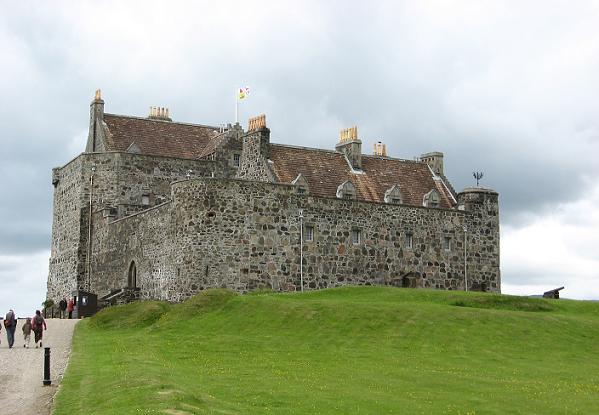 Duart Castle
The marriage was celebrated at Torloisk House on Mull, close to Duart Castle. There are several versions of the ensuing events. In one, Lachlan MacLean, angry that John refused to join the MacLeans against Angus Macdonald, broke into the bridal chamber and dragged the bridegroom out of his mother's arms, while his men killed the Ardnamurchan retainers.

Another version has it that MacLean suspected that greed was MacIain's motive but gave in to his mother's wishes. When at the banquet following the ceremonies one of the MacIain men joked about gold being the true motive for the match, swords were out in seconds and while the MacLeans happily butchered the MacIains, Lachlan himself went for John. Only his mother's pleas saved the life of her unfortunate husband.

The third is the most spectacular one. It has Lachlan MacLean burst into the reception at Torloisk and single-handedly kill several MacIain retainers, then dragging John away to the dungeons. The badass Scot version, lol. It also implies that Lachlan didn't agree with the marriage in the first place. 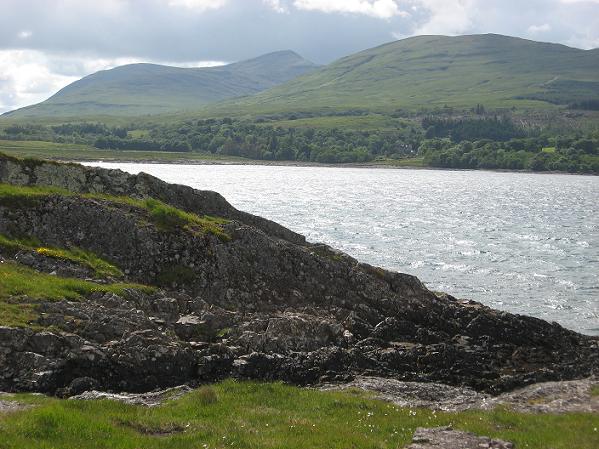 View from the peninsula to Mull
Whatever version is true, eighteen MacIain of Ardnamurchan were killed, and John was thrown into the dungeons at Duart where he suffered 'dailie tortour and panis.' Ouch.

The dungeons must have been quite crowded at the time, since the three Spanish officers were hanging out there as well. John MacIain was held in captivity for a year until he was exchanged for MacLean's son, then a hostage of Angus Macdonald. That John was still alive after a year of torture makes it clear that Scots are very difficult to kill. Or that the chronicles exaggerate. ;)

Lachlan Mhór MacLean died in a battle on Islay in 1598, aged forty-four. A befitting end for him; a straw dead would have been the wrong way to go for that adventurous and brave MacLean chief.   ¶ February 14, 2010

Comments:
Nice to read of an early marriage for love instead of convenience!
Thank you.
Le Loup.

:D We like the "badass" Scots version, as it is a thrilling and manly story, and has excited us, greatly.

It certainly is fitting that Lachlan died in battle; dying in his bed would have been all wrong for such a man!

Le Loup, yes the marriage between Lachlan and Margaret surely started out as love match, or he would not have given up on the marriage prospect arranged by the king. Though I regret that the chronicles don't tell us how the marriage worked out in the long run. Did Margaret always approve her husband's actions, did she regret that her son had to spend years as hostage in various places because Lachlan could not stop the feuding, did she think him brave or a bit of a stubborn fool?

Your Majesty, yes, the badass version is the most exciting one, and considering Lachlan's character, not impossible, either.

Kathryn, there is a legend (or ballad) connected with Lachlan's death. It is said that he laid on battlefield until two clanswomen recognised him and hired a driver to bring the dead to the nearest burial ground, but the driver handled the body disrespectfully, and so one of the women killed him with Lachlan's dagger.

Maclean had five sons with Margaret, and they fell upon the Macdonalds to revenge their father.

So now to the heady mix of feuds, fighting and Spanish prisoners in the dungeon we can add a true love affair! Excellent! I'm beginning to quite like Lachlan!

By the way, I'm glad you got the right spelling for 'dailie tortour and panis.' The alternative would have been quite eye-watering lol!

Lol Jules, that particular quote is from the Duart Castle guidebook. :)

Wow, tough castle to attack. *g* In honor of a marriage for love, I won't even plot how to beat up the fortifications. Because my trebuchet on a boat would be just... awkward.

"Badass" all the way!

"three Spanish officers were hanging out there as well."
In chains, no doubt!

Am so enjoying these posts, Gabriele!

Constance, they had powder at that time, but I agree, trebuchets are much more fun. :)

Susan, you don't need to make Scottish history up, the fun stories are right there. ;)

Bernita, according to the display I mentioned in the previous post, they actually had a room with bunk beds, chairs and a table. Maybe the difference was that Maclean had no personal grudge towards them the way he had with the Macdonald hostages who indeed were kept in chains.

Lol yeah, history has plenty of that.

And those stupid movies still manage to botcher it. Have you seen the trailer to Centurion? *shudders*

Great post! I'm finally catching up to it more than a week after Valentine's, so it's nice to have a bit of romance to read.

Sounds like Lachlan's mother may have been even tougher than he was - he no doubt spent every method he had at his disposal to argue her out of the marriage. And she still went ahead and did it!

The downtown Vancouver Library has Burke's Scottish Clans Landed Gentry. I'll see if I can find the family in that.

Brady, I'm sure the women of that time held up to the men in strength, but they seldom make it into the stories, and historical sources (besides a note that they married X and such).

Fascinating stories! I have an interest in the McLeans of Mull, as ancestors on one side of the family came from a sept long associated with them and emigrated to New Zealand mid 19th century from Coll (a small island near Mull).

Hi Annis, welcome to my blog. Glad you liked the stories about your - remote - ancestors. :)

Thanks for the welcome, Gabriele. Like many people, I suspect, I tend to lurk at interesting blogs like yours, but don't often post. I'm thinking that with your name that you must have some Scottish ancestors as well :)

Donald Sutherland climbs up the cliff to Duart Castle in the movie "Eye Of The Needle" (1981). It is very exciting.
The original Duart Castle was demolished to a total ruin around 1690. The Castle was rebuilt and furnished by Sir Fitzroy MacLean in the early to mid-20th Century. Nothing of the Duart Castle in your photos is older than 1912.