31 Mar 2010
Hear Me Roar
Seveal benches outside the cathedral in Braunschweig, facing the Castle Square, are based on stone carved lions. Every of the dozen or so lions has a unique facial espression.

Here are some of the chaps. 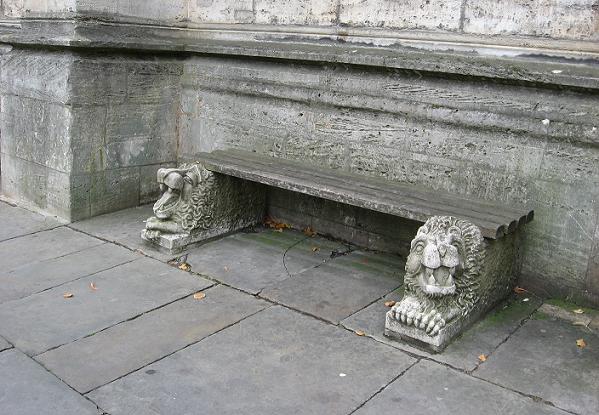 One of the lion benches

I could not find any information about those lions except that they are ‘newer’ which must mean ‘not Mediaeval’, because my father who lived in Braunschweig as kid, remembers them. The fact, that ‘bank’ and ‘bench’ are the same word in German doesn’t help with googling, either. Well, even without any further information the little lions are fun. 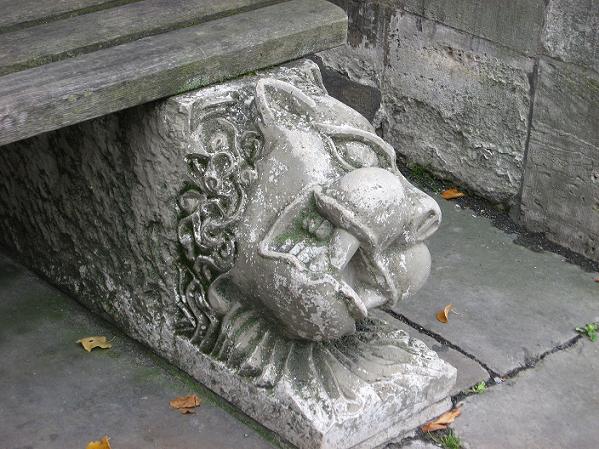 Grroarrr
Braunschweig is connected with lions because of Duke Heinrich the Lion and the great lion statue in the Castle Square comissioned by him. And of course, there are restaurants, pharmacies and whatnot having 'Lion' (Löwe) in the title. So it's no surprise there are a few of the fellows supporting benches. 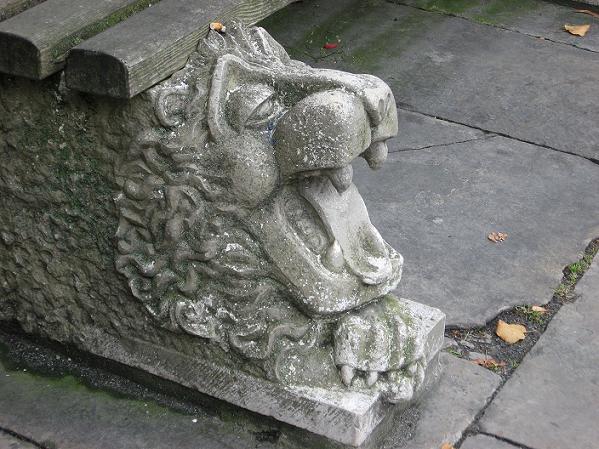 Yaaawn
Heinrich owned a pet lion (who hopefully got a better diet than King Edward’s lion). According to legend, the lion refused to eat after Duke Heinrich’s death and died of grief. There are some scratches on the northern cathedral entrance said to have been made when the lion tried to force its entry, following the body of its dead master.

The real reason that caused those scratches may have been the attempt to obtain some powdered stone – after all, a cathedral is a holy place – to mix into medicines. 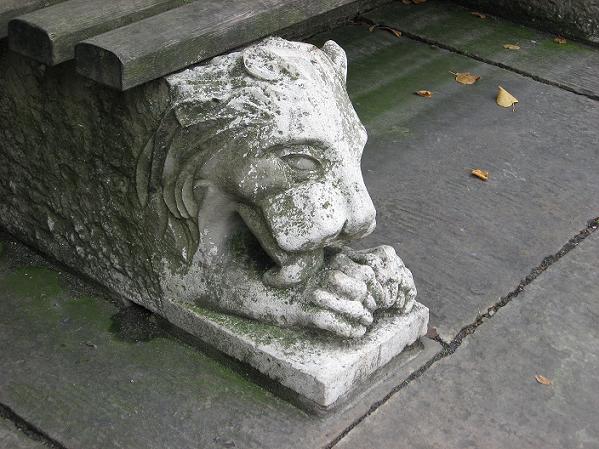 Purrrr
BTW, brownie points for the one who knows where the title of this post comes from. *grin*  ¶ March 31, 2010

Comments:
Great pictures! And I fear that I'm old enough to get the brownie points, if it's a certain song you're thinking of.

I hope they don't bite your backside when you sit on the bench! ;-)

Lol, seems there are two sets of brownie points then. I'm usually running away from anything that's not opera or Russian folk songs. ;)

I think Susan beat me to the brownie points

Hmm, those lions look entirely too happy to see people's rear ends coming toward them...

They're great! And I love the story about Heinrich's lion, too.

I am womaaan! Though your wonderful little lions seem to all be --male :)

Jules and Constance, they didn't bite. :)

Hank, I didn't know about the song, but you and Susan get some chocolate chip cookies, and I reserve the ginger cookies for the ones who guesses the second source of that title. ;)

Louis, those benches would look nice in a royal park.

Annis, there are some female lions, too.

Kathryn, it's interesting to see a legend like this about a feline creature. They are else mostly connected with dogs.

I thought immediately of "I am woman"
These are totally delightful lions.

Heh, I must try and find that song on youTube now. :)

My reference was the motto of House Lannister from Martin's A Song of Ice and Fire, but obviously fewer people have read that one than I thought.