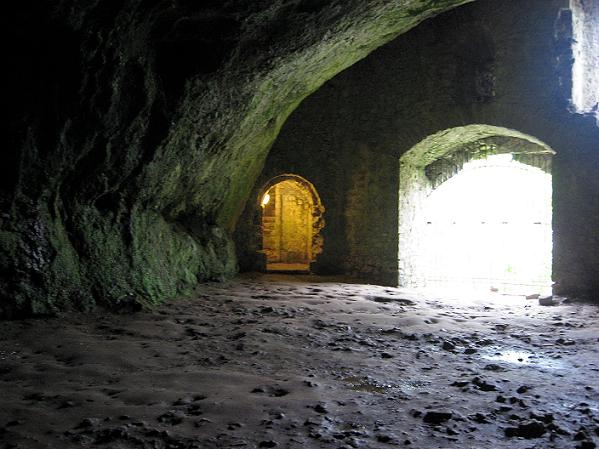 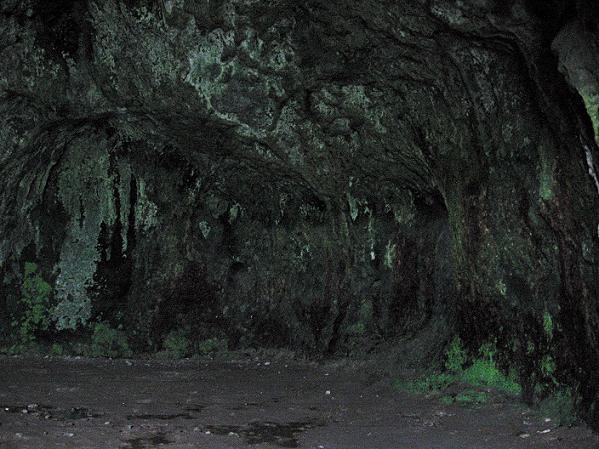 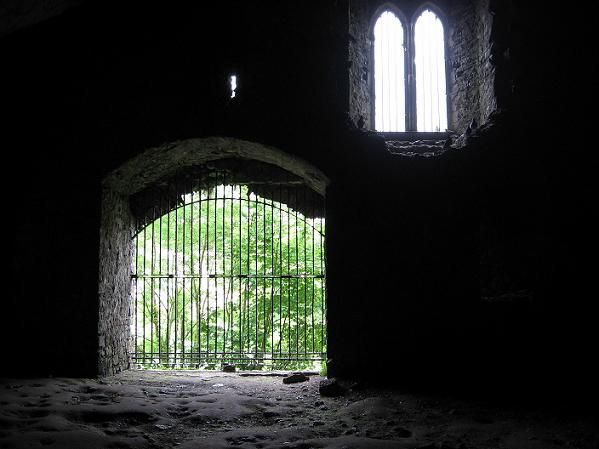 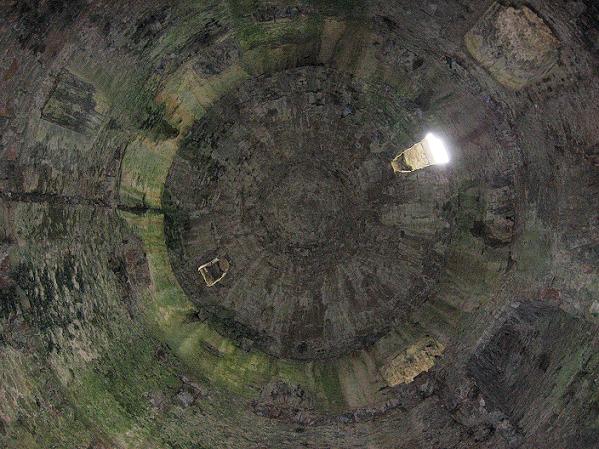 The dome
The first Norman castle on the site, built of timber and earth by Roger de Montgomery, dates back to 1090, but the integration of the cave seems to be from the time of William Marshal (owner of Pembroke since 1189) who transformed Pembroke Castle into one of the major Norman stone fortifications in Wales.
Read more! ¶ June 28, 2010 7 comments

22 Jun 2010
More Birds of Prey, and Some Mortal Combat
Just a picture post today. Here are some more photos from the Siegfriedspektakel in Xanten.. 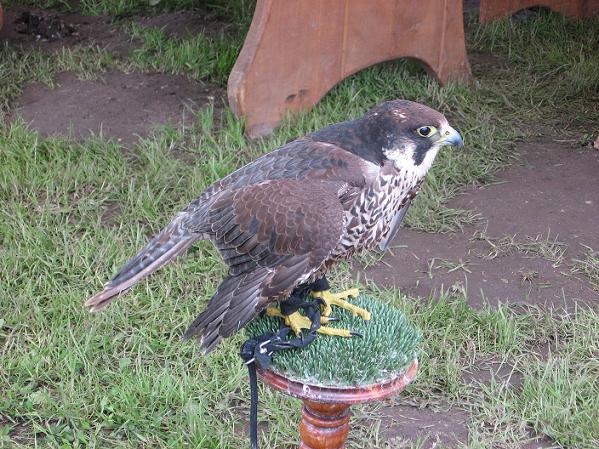 Damn that wind
One of the falcons of the bird show, balancing on its stake. The birds were kept under a tent roof - seems they didn't like getting rained on that much, either. 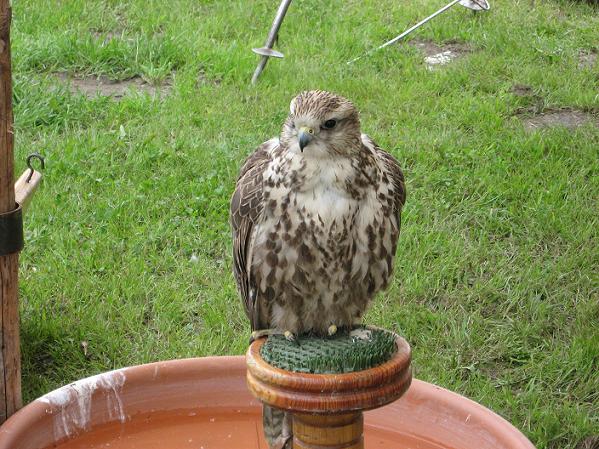 Leave me alone
In between performances, the birds needed rest and you couldn't get too close. That's where the zoom comes in. 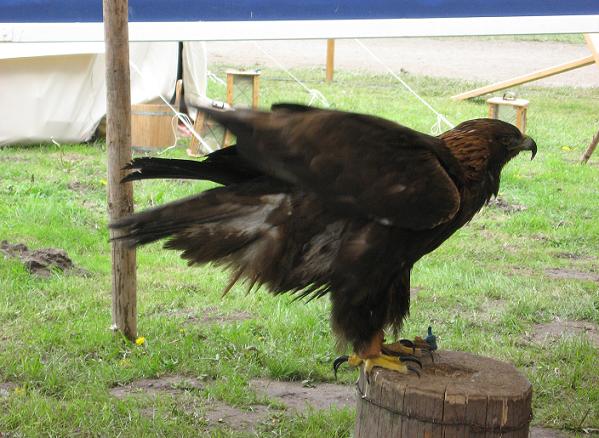 The king, shaking out his cape
Or rather, the eagle ruffling its feathers. He (she?) was a somewhat difficult star. Though I can't blame the bird for being a bit ruffled after several hours of getting its picture taken and people chatting close by. 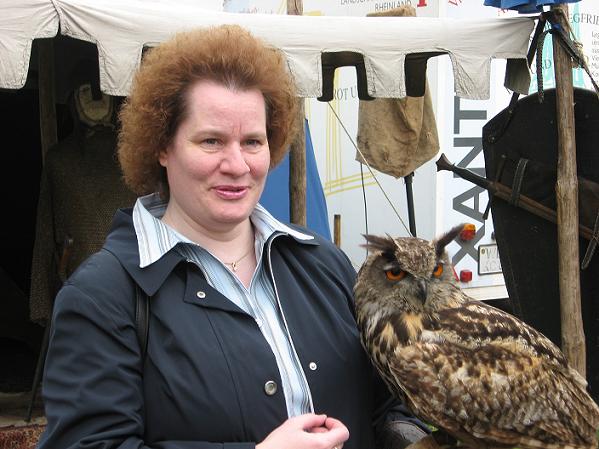 Hugo
Another photo of me with Hugo, the cute owl. Jeri met the same falconer at another renfair and took some photos as well. 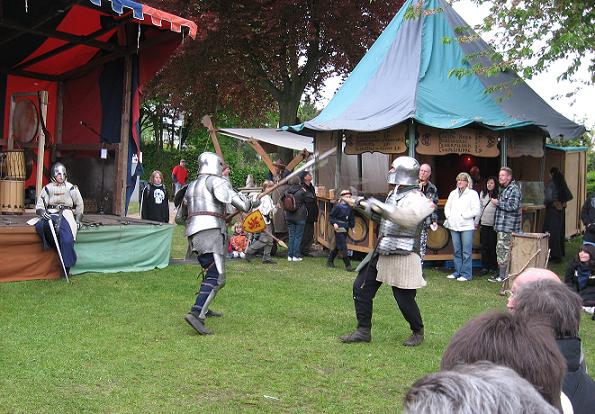 I'll get you, unworthy knave
There was a combat group that gave a rather funny performance of (not so) knightly fights. 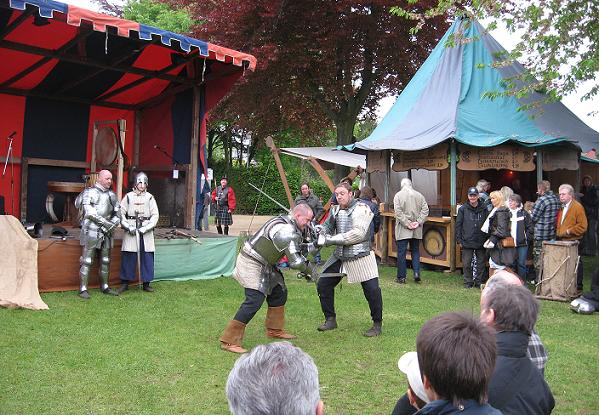 Ouww
As you can see above, they didn't always fight fairly, either. 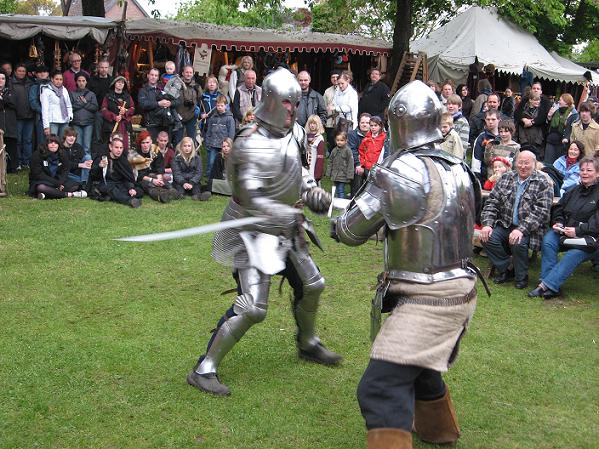 Hah villein, I'm not out of this yet
More hacking and slashing - and laughing - ensued until one of the brave combattants went down. 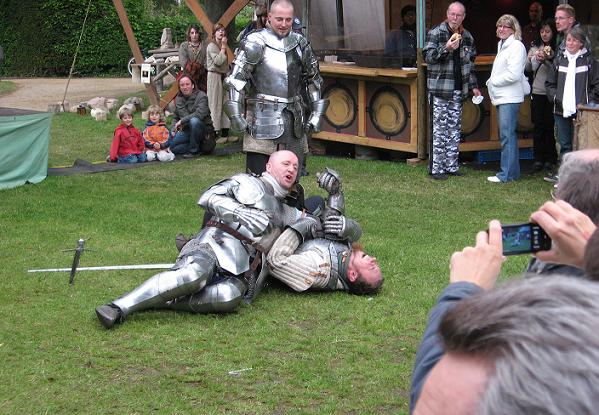 Got you!
And the other sat on him. Rather, he let himself drop onto the poor guy with the full weight of body and armour.
Read more! ¶ June 22, 2010 10 comments

16 Jun 2010
Bathing Habits
After the arrival of the Romans, some Germans no longer liked their bathrooms. 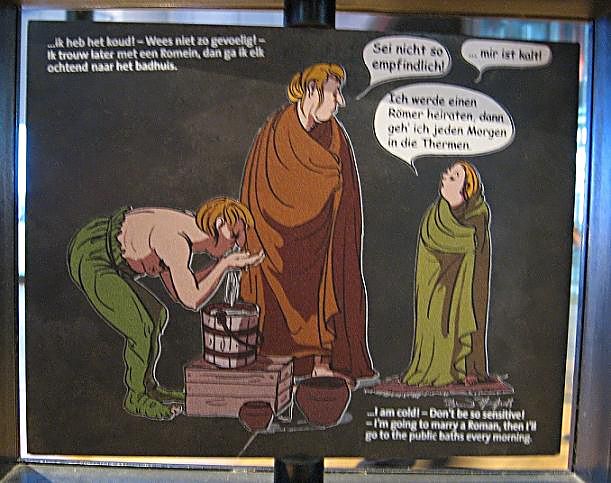 I'm cold. -- Don't be so sensitive.
I'm going to marry a Roman, then I'll go to the public baths every morning.
Well, you can't really blame her if you look at the baths in Colonia Ulpia Traiana, today known as Xanten. 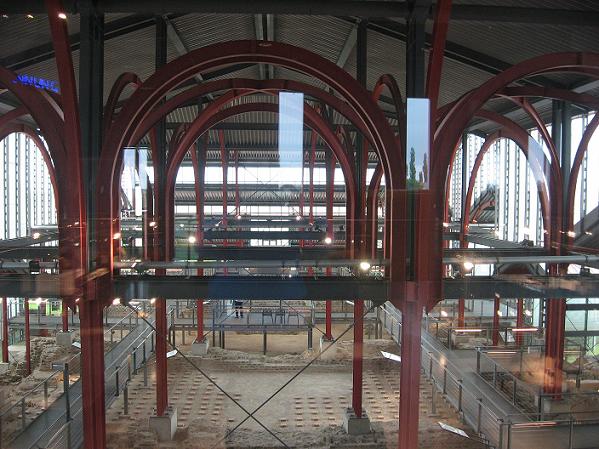 The baths in Colonia Traiana, seen from the second floor of the museum
The remains of the baths are covered with a metal and glass structure that represents the original size of the building. It's an amazing mix of old stones and modern design that works pretty well. There will be a post dedicated to those baths, with more pics. 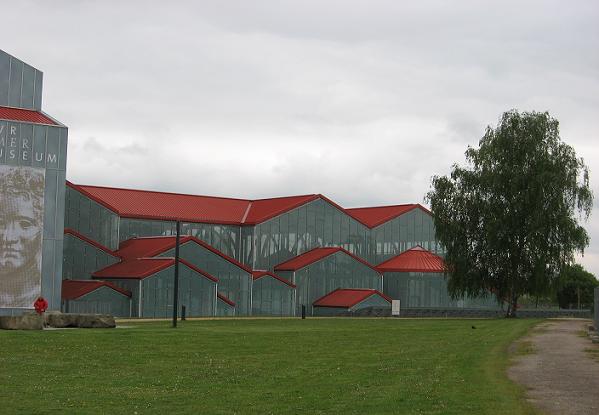 The baths in Colonia Traiana, outside view
Baths that size could only be found in Roman towns; a good example are the Imperial Baths in Trier. In Rome, public baths often were gifts from emperors (for example Caracalla), in the provincial towns they were usually paid for by rich citizens.

But those times weren't to last. 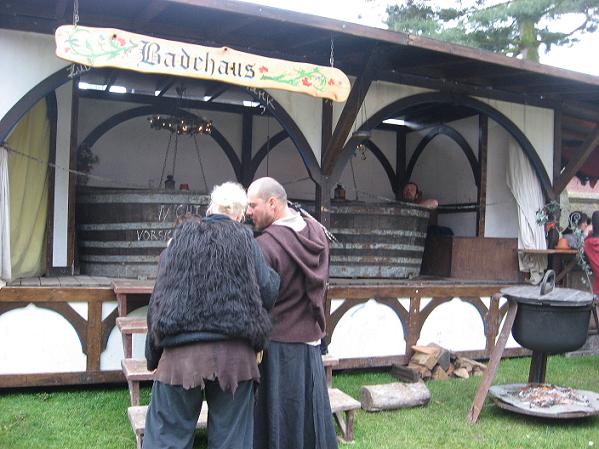 A bath house at the Siegfriedspektakel in Xanten
I've mentioned the Mediaeval renfair that took place in Xanten while I was there. Among the many fun things was a bath house.

At least the water in those tubs was warm, but it's still a far cry from Roman baths, even the smaller ones like the reconstructed baths of the inn in Colonia Ulpia Traiana. 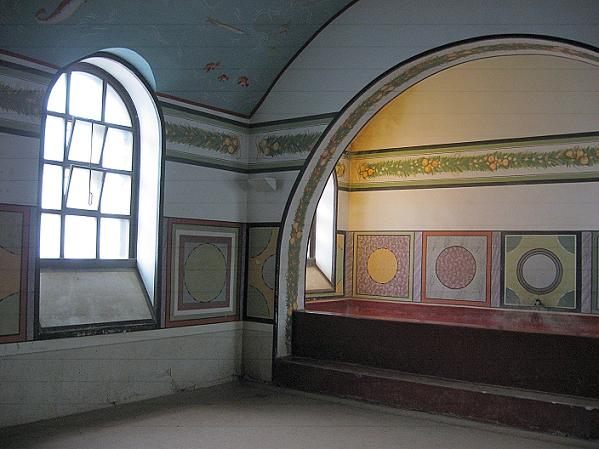 One of the rooms in the baths of the inn, reconstruction in the AP Xanten
That one reminds a bit of the baths in Segedunum; a bath of smaller scale you'd find the in the Roman border forts. But those were still larger than the Middle Age tubs - not to mention the latter were lacking the ingenious hypocaust construction for heating the rooms. 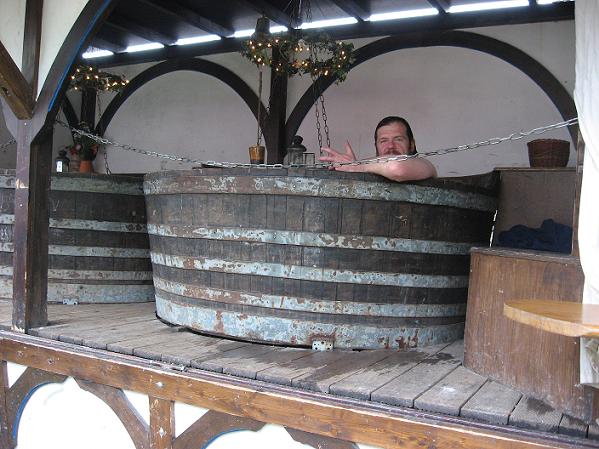 Another photo of the Mediaeval bath house
You could take a bath in those tubs but I prefered the shower in my hotel. Though for the renactors who lived in tents for four days it was an option, esp. considering the cold weather.
Read more! ¶ June 16, 2010 2 comments

12 Jun 2010
Roman Weapons - The pilum
The pilum (plural pila) is one of the weapons most typical for the Roman army. Everyone can have spears and javelins, but only the Romans had javelins that would bend on purpose. 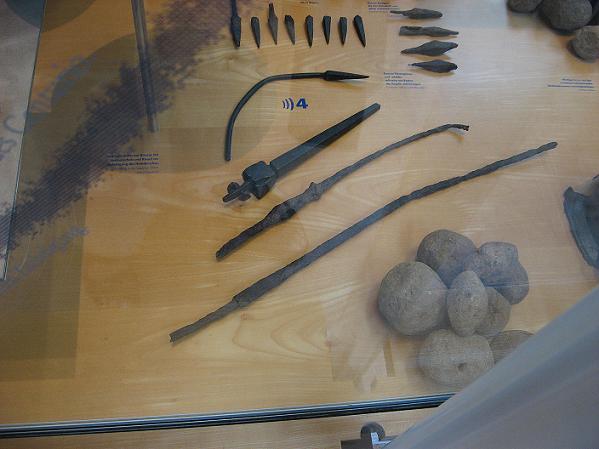 Iron pilum shanks, LWL Museum Haltern
A pilum consisted of an iron shank about 60 cm in length that ended in a pyramidal head. The shank was attached to a wooden shaft either by a flat tang and clamp or a socket and rivets, bringing the entire length of the pilum up to 2 metres. It weighed between two and five kilograms - the versions during the Empire were usually the lighter ones, and it also seems the legionaries carried only one, not two as in the late Republic.

The point was hardened iron, but the shank was left unhardened which led to the following result. 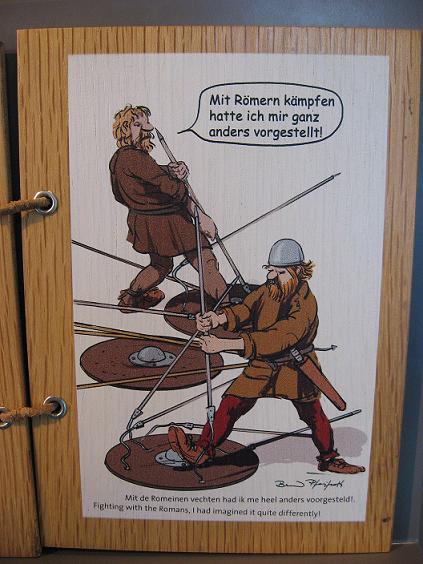 (I had imagined fighting the Romans to be quite different.)

The pilum would be thrown in salvas from a distance of 15-30 metres. The energy of the impact concentrated in the pyramidal point of the weapon. Not only would opponents be wounded, but the pila went through the shields where they got stuck. Since the shank was not hardened, the pilum bent and was almost impossible to jank out of the targe during battle. The only way was to drop the usueless shield. That was particularly effective against people who did not have much in the way of body armour but relied on targes, like the Germans.

There seems to have been a version where one of the rivets was made of wood which would cause the shaft to twist even if the impact was not strong enoug to bend the iron shank. The invention is ascribed to the late Republican consul Gaius Marius (which would make sense because he was the first who had to deal with large numbers of raw recruits he had to train in a hurry). Another advantage of the pilum construction is that it could not be thrown back by the enemy; moreover, the iron parts could be collected after battle and reforged. 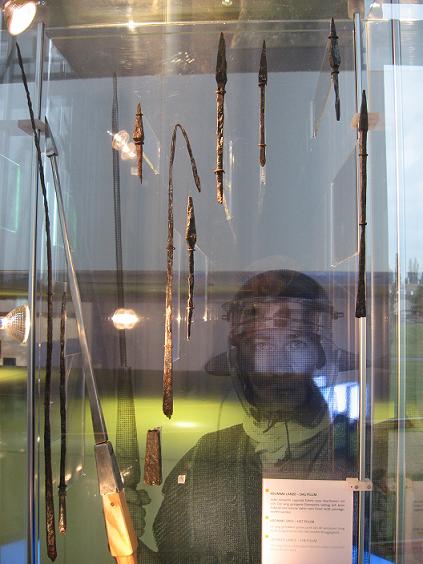 Another fine display of pila from the APX Museum in Xanten, going by the title 'Crooked Lances'. Well, not so much lances as javelins, but crooked they were.

The pieces in the middle are original finds, framed by two reconstruced versions. The one to the left has a wooden shaft shaped in a way it would give the hold better leverage (you can see it in the background drawing as well). Another method was to wrap the shaft with leather or linen straps to prevent the hand from slipping on the wood.

There is pictorial evidence that some versions of the pilum were weighted by a lead ball at the end of the shaft, but so far no such balls have been found.

7 Jun 2010
Sometimes I Want a Stylus and Wax Tablets
Because Microsoft programs don't make any sense, dammit. I've spent several hours trying to get a PowerPoint presentation up, and I'm still swearing at Word 2007 on occasion. 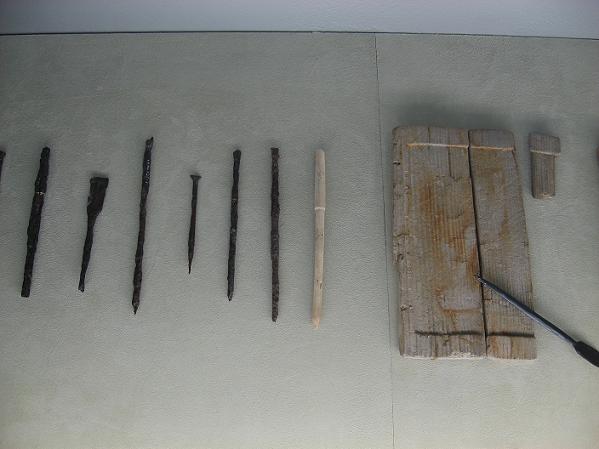 I'll be back with a longer post as soon as I got the bunch of monkeys that keep me occupied off my back.
Read more! ¶ June 07, 2010 15 comments