17 Jul 2010
More About Roman Transport
There were basically three ways to pack wares for transport: barrels, sacks, and amphorae. Barrels were the most widespread variant and could come in different sizes. Including an XXL variant. 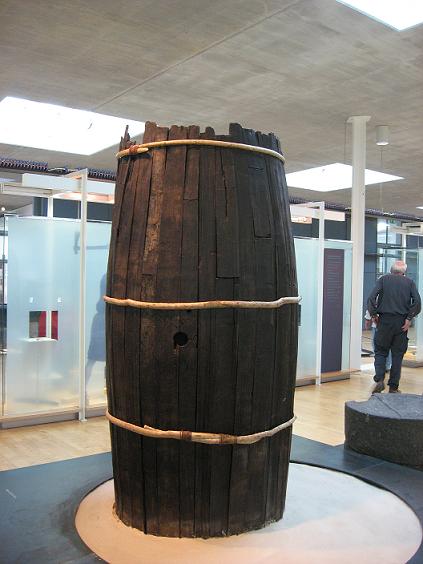 We even know what was in that big barrel: Wine. Lots of wine. Those legionaries were a thirsty lot, it seems. It's a lucky find since timber seldom survives 2000 years in the ground. Besides being thirsty, our legionaries also liked their olives, salted ham and lots of other food that would have been transported in barrels. Not to forget garum, the fishy Roman ketchup. :)

A little aside: Barrels were still used in the Middle Ages; there are some lanes in the Hansa town of Lübeck just wide enough that you can roll a barrel along. At that time, even cloth would have been rolled up and packed into barrels but I'm not sure if the Romans did that.

Rolling barrels was surely more fun than hauling heavy sacks around. Though the lanes in Lübeck go uphill, and so did the roads to several Romans forts - maybe not that much fun, after all.

Wheat was usually transported in sacks but one of the better preserved barges shows the grain had been put in loose. Maybe the transport company had run out of sacks and sent the much needed wheat off anyway. At the destination harbour, some poor sods on extra service probably had the ungrateful task of shoveling the stuff into sacks and carry it to the fort. Makes you wonder how much got lost that way, though maybe the legionaries were a bit tired of porridge. *grin* 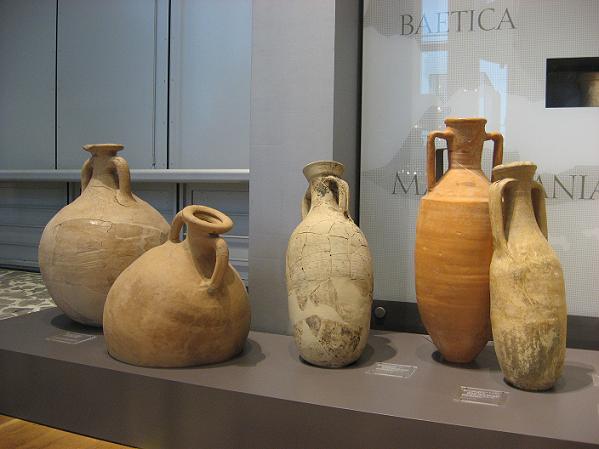 Amphorae were mostly used for luxury items that came in smaller amounts. First class olive oil for the general's table and such. To make sure the amphorae won't break, they often were put into a chest with sand. Better than those modern styrofoam packing peanuts that stick to curious cats. Ask Constance.

There are some XXL sized amphorae around, but most of them seem to have been used on seagoing vessels; the gound of the Mediterranean is littered by shards from the ones that never made it to their destination. It's difficult to approximate the amphora / barrel ratio, because timber decays more easily.

Comments:
How great that that barrel has survived for so many centuries! I love the story about the narrow streets of Lübeck; sweet! :-)

Kathryn, the old town of Lübeck is very well preserved, with pretty houses and Backsteingotik cathedrals. I've been there in 2004*, but back then I only had an analog camera and didn't take so many photos (film rolls are expensive).

* Again, I should say; I've been to Lübeck a few times as child because it's not far from the place where we spent our holidays at the Baltic Sea.

Rolling a barrel uphill without a braking system can't have been a job for the faint-hearted :-)

Hehe, I can imagine. It's not too bad in Lübeck; the slope is rather gentle. But judging from some photos of Bergen, equal lanes can be found in other Hansa towns, and in that particular case they were steeper. The way from the Rhine up to the Vetera fort on what's today the Fürstenberg must have been a nice haul, too, and that in an overall flat landscape. I even prefered to walk the bicycle the worst part uphill (I had rent one in Xanten).

Those amphorae have a lot of personality! Then again, so do the wine barrels. :)