8 Aug 2010
Limes Fort Osterburken - Part 1: The Discovery
The Roman fort of Osterburken is situated at the outer Odenwald Limes (1), some distance east of the Rhine. It's a double fort: a traditional, card shaped cohort castellum on rather flat terrain in the valley, today covered by houses, and a trapezoid shaped annex fort housing a numerus, a smaller, irregular auxiliary troop of about 120 men. The annex fort is built on a steep slope and shows the remains of some impressive Roman architecture. 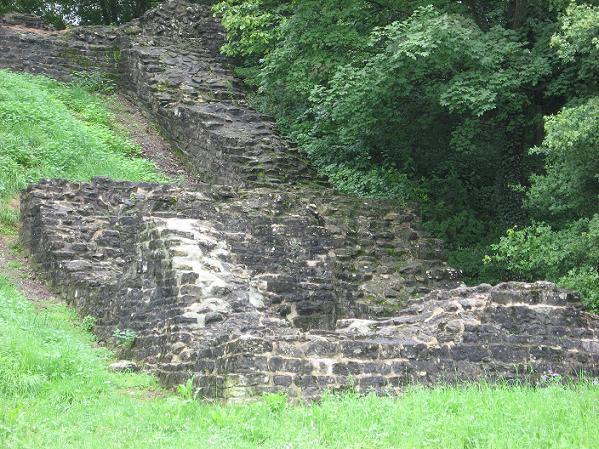 The heaps of stones in the Kirnau valley near Osterburken were identified as remains of a Roman building when a stone with the inscription 'Legio VIII Augusta' turned up in 1718. But at that time the interest in the Romans in Germany was not great, except for the ideological-patriotic interpretation of Tacitus' Germania and the Varus battle. Thus, a good number of the stones was used as building material in the church and surrounding farms (there's a bill about 30 waggon loads of stones in the parish archives, dating from 1813).

Things changed when one Karl Wilhelm, chairman of the Society for the Research of National Monuments, discovered a deposit of 30 silver coins in 1838. The fields in the Kirnau valley became the target not only of serious archaeologists but also of treasure hunters in search of Roman objects. The town major Hofmann called them 'Californian gold diggers'. 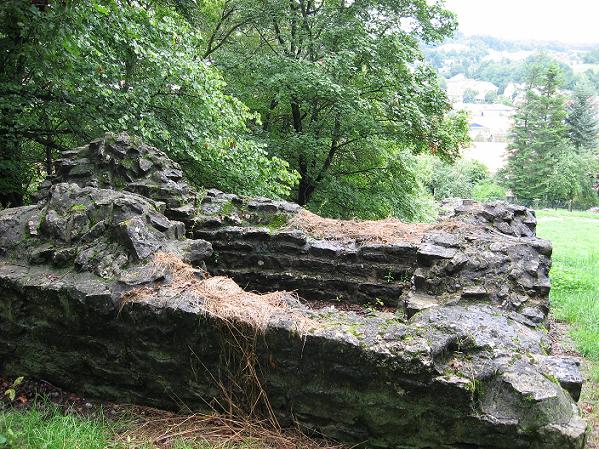 View from the west gate down to the valley
But even archaeologists like the members of the Mannheim Historical Society who were involved in the excavations were more interested in digging out shiny things, coins, weapons and altar stones which could be displayed in museums, than in either documenting the exact in situ position of their finds, or any detailed analysis of the walls, post holes and other architectural features. It was the time of Heinrich Schliemann who did much the same in Troy.

The situation improved with the founding of the Commission zur Erforschung des Limes Imperii Romani in 1852 (2). The 550 kilometres of the Limes - where it could be traced with the means of 19th century technology - were divided into parts and the forts numbered. By then the remains of Osterburken had been identified as Roman fort, albeit with an odd double structure: one fort in the valley and another one up the southern slope of the Hundsrück hill. It got the number 40. 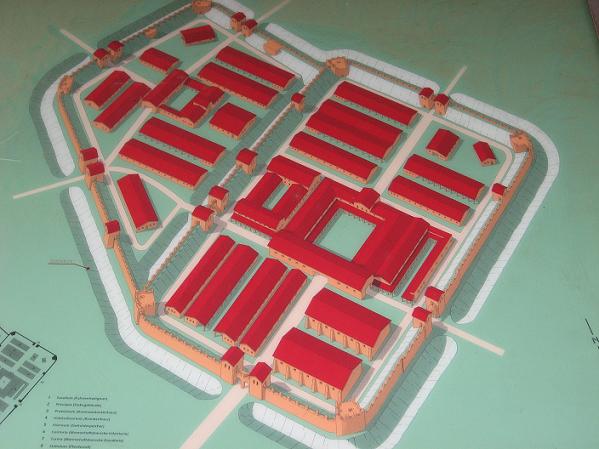 Osterburken fort, model
Karl Schumacher, chairman of the Römisch-Germanisches Zentralmuseum in Mainz, undertook two digs in 1892 and 1893. Most of what we know about the Osterburken fort goes back to his work. Schumacher also tried to conservate the annex fort; there were even plans to rebuild the south wall but those came to nothing.

Unfortunately, interest waned after 1900 and the area of the main fort was built over with houses in the mid-20th century. Only the south wall that connects with the annex fort remains. I could not find a reason why it was abandoned that way, but I suspect the land was needed since Germany is rather densely populated, and the remains probably weren't that spectacular. It's still a pity, though.

The annex fared better because it houses a monument for the dead of WW1 and today is a little park. There may be a chance for another dig; it's assumed the ground still should render some interesting discoveries. 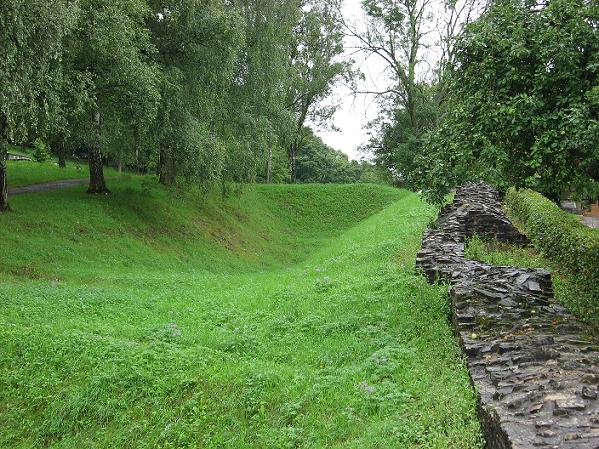 Trench between main fort (wall to the right) and annex
Some Roman stones with inscriptions appeared during the renovation of the parish church (I told you those people used every stone they could carry or drag in their walls) and in 1973, the remains of the military bath were discovered during railway construction work. That incited new digs in 1976 (a second bath was found), and 1982, which led to the discovery of the famous altar cove of the beneficarii (3).

The second bath had already been conservated and roofed in in 1986, with a little museum attached. The museum has been considerably enhanced in 2006, and now houses finds from the digs in Osterburken as well as the area, both Roman and Germanic. Its most famous object is the Mithras stone. 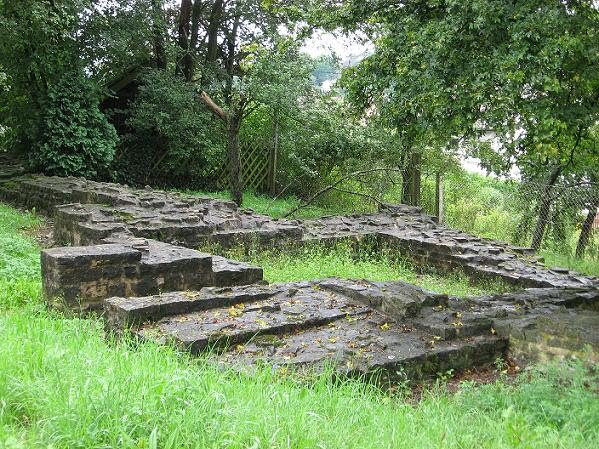 Annex fort, some foundations on the north side
(1) The German Limes was a frontier cutting through the right angle formed by Rhine and Danube, the first borders of Germania. It starts north-east of Wiesbaden and meets the Danube near Regensburg, thus adding not only the Taunus and Odenwald forests but also the fertile lands of the Wetterau and Neckar plains to the Roman Empire.

(2) In 1891, this would become the Reichslimeskommission. The famous German historian Theodor Mommsen got the project underway. Up to that point, research had been in the hands of the local governments of Hessia, Württemberg and Baden. The commission published a series of articles between 1894 - 1937 and undertook a number of excavations. Since 2003 research and representation of the Limes are supervised by the Deutsche Limeskommission; since 2005 the Limes is UNESCO World Culture Heritage.

(3) Beneficarius is a specific grade within the military staff. During the principate, their tasks encompassed the maintenance of the roads and relais stations, the collecting of tolls, and obviously also intelligence work. Beneficarii often set up an altar after they succesfully conducted - and survived - their job. Osterburken was a key post in the road network and developed a veritable cove of altars.

Is it known how long the fort was in use for, or whether the two parts went out of use simultaneously or at different times?

Two bath houses seems a generous provision :-) Is it known whether they were both in use at the same time (a second one added to increase capacity when the annex was built, perhaps?), or whether one replaced the other?

That really is a pity that the main fort was built over. :( I hope the annex yields some interesting discoveries sometime soon, though!

Carla,
both forts were in use simultaneoulsy, as far as we know. the Limes was abandoned in 260 AD and that would be the latest date for Osterburken as well, though the fort was attacked during the Alamannic incursion (probably the one in 233 AD) and may not have been fully restored after that.
Yes, there were two baths, like in Vindolanda. One clearly a military bath, the other may have belonged to the vicus.

Kathryn, yes it is a pity. The building over fell into a time where the old Reichlimeskommission was no longer active and the German Limes Commission not yet established. After the war and into the 60ies, there were more important things than preserving a few Roman remains, alas.

As someone who has studied the Roman Army for quite a while now and likes to visit the forts I found this very interesting indeed, thank you. Hope to see the site for myself in July 2017, along with about 27 other sites along the Limes.

Enjoyed the articles very much, thank you.