15 Aug 2010
Limes Fort Osterburken - Part 2: The Garrisons
Well, sort of. What I got here is a display of tin figures in the museum at the fort Osterburken. It's an unpainted version and was very difficult to photograph through the glass. But they got lots of the shiny little guys so I tried to catch some for you.

Tin figures have been popular in Germany since about 1800. They are two-dimensional relief figures, different from the three-dimensional figures common in the UK and US. Some three-dimensional tin figures are produced for the export where they compete with the plastic and lead ones, but I'm not sure how successfully. Painted versions are more common but I suppose no one felt up to the task of painting the lot in the Limes Museum Osterburken.

The garrison of the Osterburken main fort during the so-called Limes time (about 100 - 260 AD) was the cohors III Aquitanorum equitata civium Romanorum, a mixed horse and infantry cohort. Some of the footsloggers are on the photo below. 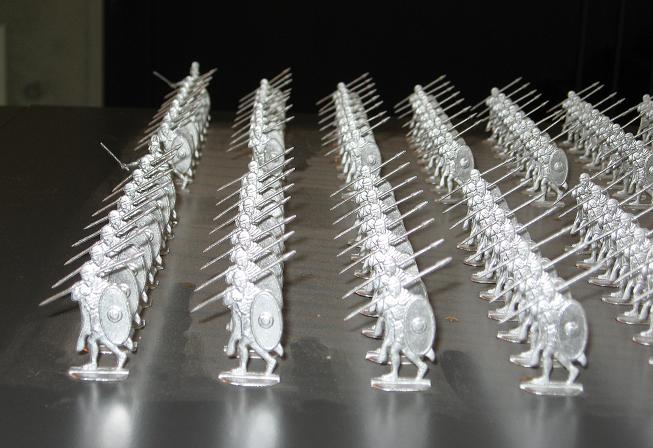 The 3rd Aquitanorum was originally raised in the province Gallia Aquitana, either by Augustus or Claudius. The first dateable appearance is from 74 AD and mentions the discharge of veterans, so the cohort must have been around at least 25-28 years. The cohort was stationed in Germania Superior at that time, the province that comprised western Switzerland, the Alsace, and south-west Germany. It would remain there during its recorded existence, mostly concentrated in the Odenwald forts.

The soldiers of the 3rd Aquitanorum would have been pretty Romanised at the time of their service at the Limes. There are no differences in the artifacts found in auxiliary forts along the Limes and the legionary forts in Mainz and Strasbourg. They were also no longer recruited in Aquitaine, but closer to their place of service. The title civium Romanorum and the summary grant of citizenship to the whole cohort was a reward for valour, but it did not extend to new recruits - those had to serve their 25 years and received citizenhip upon discharge. But the cohort was allowed to use the title perpetually. 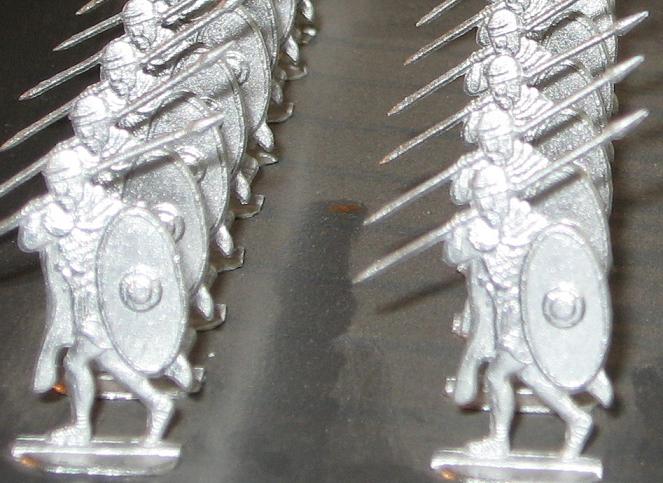 Infantry, closeup
The Legio VIII Augusta mentioned in the previous post was never stationed at the Limes, but some of its members built Osterburken. For some reason, the Romans didn't trust the auxiliary to build straight walls (1).

The Limes functioned much like the Hadrian's Wall, with auxiliaries stationed in the frontier forts and the legions further in the hinterland (York / Eboracum or Mainz / Moguntiacum and Strasbourg / Argentorate). The frontier forts served as migration control and toll stations, and as first defense line. If a larger group made it through (which happened at the Limes in 213 and 233), the legions would get them upon return from their raids. Live in the agri decumantes (the land between the Limes and the Rhine) at your own risk. ;)

Below are the happier guys who got horses. An equitata cohort had four (2) turmae à 32 riders, that would make 128 horse. The infantry varied; there were six centuries with 60 - 80 men each, so a full strength cohort could number between 488 - 608 men, not counting the staff. All the Limes garrisons were equitata units or - more rarely - cavarly, never infantry only troops.

A cohort was commanded by a praefectus, a Roman citizen of equestrian status, but only one of those leading the 3rd Aquitanorum has left an inscription. There are a few documented names of centurions as well, but overall the auxiliary cohorts of the German frontiers leave room for inventing characters. 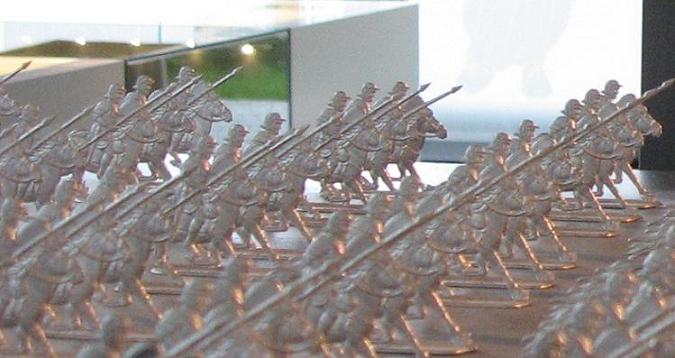 Roman Cavalry, 2nd century AD
The garrison of the annex fort is more difficult to trace. The most probable candidate is the numerus Brittonum Elantiensium (3). A numerus was a smaller, irregular unit that was only recruited for specific purposes. They started under Hadrian who used them as intelligence units (exploratori).

In the 2nd century, the numeri became a regular feature of the Roman army, esp. along the borders, but they still ranked below the auxiliaries and did not automatically receive citizenship upon discharge. The were recruited among the barbarian tribes (the auxiliary came from the provinces). There were a number of them along the German Limes that came from Britain.

A numerus encompassed 140 - 160 men and was commanded by a praepositus, usually an experienced centurion dispatched from a legion. They had forts of their own with the complete set of commander's house and staff buildings as well as their own baths. In the 3rd century the numeri became larger units, attracted also Roman citizens, and were commanded by tribunes. 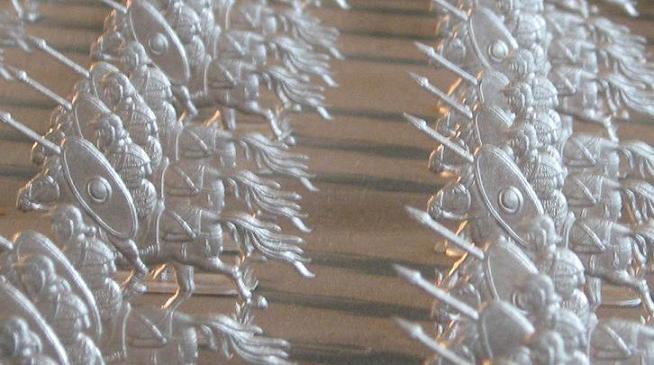 Cavalry, closeup
The numerus Brittonum Elantiensium had previously been stationed in Neckarburken, also at the Odenwald Limes. The 3rd Aquitanorum came from that place as well before it moved to Osterburken when the border was pushed further east in that area in 155 AD. The numerus must have remained in Neckarburken (there's an inscription dating to 158) to secure the supply lines along the Neckar river. The unit moved to Osterburken some time between 185 - 192.

Both the Neckarburken dedication from 158 AD and another dedication stone from Osterburken mention one Veranius (Saturninus) as commanding officer of the numerus. That has led to some disucussions about the dating of the annex fort - it was suggested that an earlier annex fort was built in a different place, but the Osterburken inscription is incomplete and open to interpretation. I think it's also possible that two officers with that name commanded the unit; Veranius is not such a rare cognomen, and it could have been father and son. The official websites of the Limes and of Osterburken agree on the date of 185 - 192 AD for the annex fort and the numerus Brittonum Elantiensium as its garrison.

We don't know for sure whether the numerus was mounted, or part mounted, but it's highly probable considering the fact that mobile troops were important for the Limes defense. 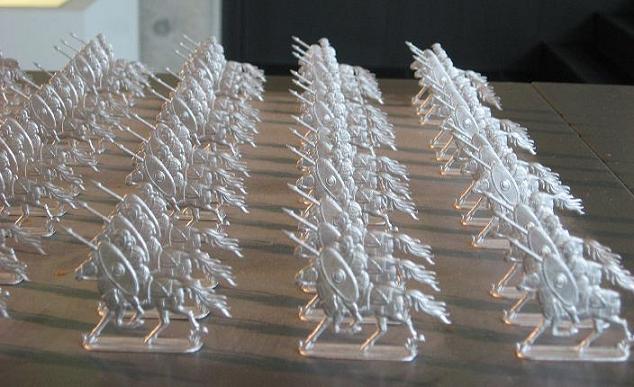 Cavalry, seen from the other side
Another interesting find from Osterburken are some triangular arrow points ususally used by Eastern archers (fe. the Syrian troops stationed at the Hadrian's Wall). We don't know if there was a detachment of those in the fort at least for some time, or if the auxilaries adopted the Eastern bows.


(1) With the exception of repair work under the surveillance of a Roman officer, as several inscriptions show.

(2) One online source names six, but if that is possible I suppose there was less infantry or the cohort would grow too large. A cohors milliaria had 10 turmae, but those had a complete strength of one thousand men.

(3) Elantiensium means: from the Elz river. Numeri were often listed by their first station even when they moved to a different place, but they were never numbered.   ¶ August 15, 2010

Comments:
The formatting of those photos is a bit odd, so please tell me if anyone gets the sidebar pushed to the bottom because the pics are too large, and I'll resize the culprit(s). ;)

I know those forts were built more as bases than a defense, is my look at Earth Google correct. The main fort was built with higher ground just off the south wall, which may have been a reason the numerous fort was built on that hill?

The formating coame out well on screen.

Hank, that was exactly the reason the annex fort was built on that slope. Can't have some Alamanni throw pointy things down the hill. :) I'll get back to the forts in another post.

Wow, they really do have lots of the shiny little guys. :-) Great info about the Roman military, Gabriele!

The formatting is fine for me, by the way.

Thank you, Kathryn. The tin figure vitrines are difinitely a looker. :)

The formatting looks fine in IE. The little tin figures are great.

Are there enough records to tell whether the composition of the equitata unit could vary over time, e.g. is it possible that the garrison had 4 turmae at some times and 6 at others?

If the numeri were still used for intelligence and scouting work on the Limes, it would make sense for at least some of them to be mounted for greater mobility. Presumably if they were raised in Britain and not from the Roman province during or after Hadrian's time they came from somewhere in either southern or northern Scotland (depending whether the province boundary was Hadrian's Wall or the Antonine Wall at the time).

Carla, that is possible, The army structure changed in the 3rd century and the auxiliary cohorts may have been expanded. Need to look that up. I'm thinking in Augustean categories most of the time. :)

The numeri are an odd thing. There had been some sort of irregular troops recruited among the natives for a limited period already in Germania at least since Tiberius' second campagin (4 AD). Though good arguments can be made that the Cheruscians had been a regular auxiliary because Arminius was a prefect of equestrian rank, that is a Romann officer, and those numeri-like troops were led by their own tribal chiefs / kings / whatever. Though that had changed under Hadrian who put them under the command of a Roman centurion. Probably had good reasons for that, lol.

Originally, those troops, both auxiliary and numeri, often served near their home, but after the Pannonian revolt, Varus disaster and the Batavian rebellion, Rome prefered to send the guys fat off - that's how the Batavians ended up at the Hadrian's Wall. In the 3rd century it was back to filling the ranks of the auxiliary with men living closer to the place where they were stationed, but they never again became units that were based on tribal structures (like the Batavians in 69 AD); it was more a mix.

I'm not sure about those numeri from Britain, but my guess is that their ranks, too, were filled up with locals. It had the advantage that some German guys would know the terrain (which is good for intelligence work), though there was always the problem how far you could trust them. But in either case, the officers were Romans since those above mentioned desasters.

Until even later when Germans would take up the highest military positions in Rome in the 5th century (Stilicho, Ricimer, etc.).

"there was always the problem how far you could trust them"
As with the Hadrian's Wall areani who apparently joined the Barbarian Conspiracy!

Something like that, I guess. The Alamanni always attacked the Limes when the Romas were busy in the east fighting the Sassanids, and therefore had to reduce the legionary presence in the interland. There must have been some Alamannic intelligence. ;)