1 Oct 2010
Castles of the Welsh Princes - The Rise of House Aberffraw in the 12th Century
Reading up on Welsh history makes me suspect it was the Princes of Gwynedd who invented the dysfunctional family and the Plantagenets only copied them. There was a lof of brothers fighting each other, one ending up in exile from where he would promptly return with a fleet (Irish/Norse in most cases), or in prison from which he would escape and manage to find an army somewhere. Adding to this that the English kings and the marcher lords (in particular the Earls of Chester) also played that battle / exile / hostage game, it's surprising that northern Wales saw times of peace at all. But it did.

The Welsh stone castles mostly date to the 13th century, but they make for some nice illustrations nevertheless. 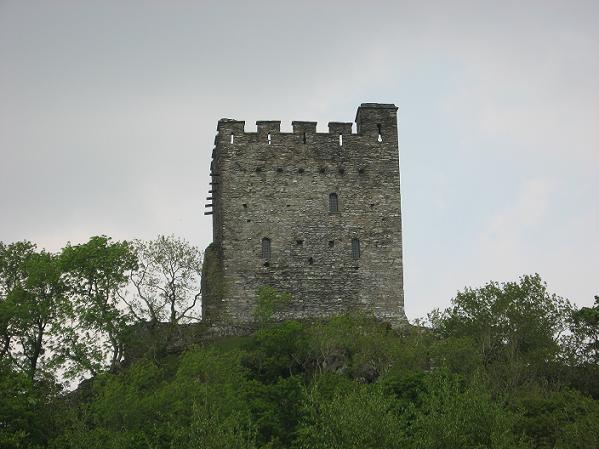 The first ruler of Gwynedd who managed to establish some sort of stability north of the Conwy river was Gruffydd ap Cynan. Gruffydd's mother Ragnhild was a daughter of Olaf of Dublin. Little is known about his father who obviously died while Gruffydd was still very young. Gruffydd made a first attempt to oust his rival Trahaearn ap Caradog from Gwynedd in 1075. He had the aid of his Irish relations and of Robert of Rhuddlan, a Norman lord and cousin of Hugh d'Avranches, Earl of Chester. Some strange alliance that, and it didn't hold. Gruffydd managed to drive Trahaearn out, but tensions arose between the Welsh and Gruffydd's Irish-Danish host. The Welsh rebelled and Trahaearn kicked Gruffydd back to Ireland.

Where he would not stay forever. In 1081, Gruffydd tried his luck again. This time he allied himself with Rhys of Deheubarth, perhaps lectured his Danes about being nice to the Welsh, and killed Trahaearn in the Battle of Mynydd Carn. The Normans didn't like a strong ruler in Gwynedd, though. Earl Hugh of Chester lured Gruffydd to a meeting where the Welsh prince was taken captive. Some say by treason of one of his own men, others blame Robert of Rhuddlan which would make sense because Robert was to gain a nice chunk of land. The Normans extended their supremacy over most of Gwynedd and built several castles in the years to follow. 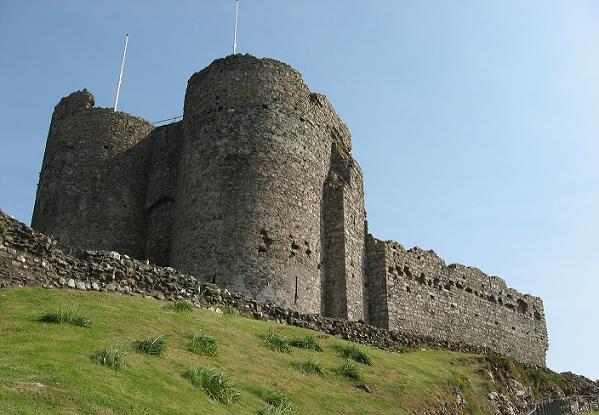 Criccieth Castle
It's not clear how long Gruffydd stayed in prison in Chester (Ordericus Vitalis in his Historia Ecclesiastica can't make up his mind whether it was 12 or 16 years). Gruffydd eventually managed to escape and participated in the Welsh rebellion in 1094/95. He retreated to Anglesey before Earl Hugh of Chester's advance and had to flee to Ireland. Again. Moreover, Gruffydd had to cross the sea in an open boat. Sounds like fun.

OK, I promise the fourth time will work. This is getting sorta boring. The death of the Earl of Chester in 1101 brought Gruffydd back to Gwynedd and this time he managed to consolidate his power both by war and diplomacy. King Henry I of England, not liking the idea of a strong Welsh ruler, promptly invaded Wales and forced Gruffydd to do homage, but the Welsh prince could keep his possessions. Gruffydd's sons who led the men of their aging father, extended the power of their family further into the south of Wales.

Gruffydd ap Cynan died in 1137 and was buried in Bangor Cathedral. 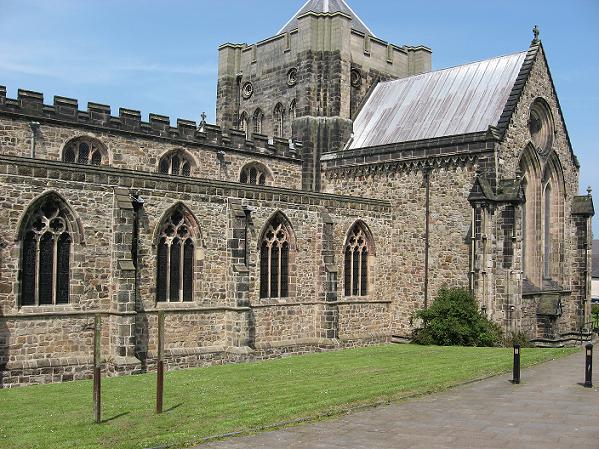 Bangor Cathedral
His sons Owain and Cadwaladr had an uneasy relationship. Troubles started when Cadwaladr had - for some reason unknown - Owain's ally and brother-in-law to be Anarawd of Deheubarth assassinated. Owain drove his brother out of his lands in Ceredigion; Cadwaladr fled to Ireland but returned and made peace with his brother only to fall foul of Owain again; he fled into exile once more in 1155, this time to England. Well, the latter is at least some change to the routine. *grin*

Owain used the civil war between Stephen and Maud in England to push the borders of his realm further east into Powys, even conquered Rhuddlan Castle in 1154 and came close enough to Chester to make the earl feel uneasy about this neighbour. Not that the latter was anything new, though. Owain also made it into several of Ellis Peters' Cadfael novels.

But when King Henry II of England came to power, matters changed. Henry tried to gain supremacy over Gwynedd with his shiny Norman army, but after he almost managed to get himself killed in the battle of Basingwork in 1157, he decided to resort to diplomacy for a change. "A people called Welsh, so bold and ferocious that, when unarmed, they do not fear to encounter an armed force, being ready to shed their blood in defence of their country, and to sacrifice their lives for renown," he later wrote to the Emperor of Byzantium. 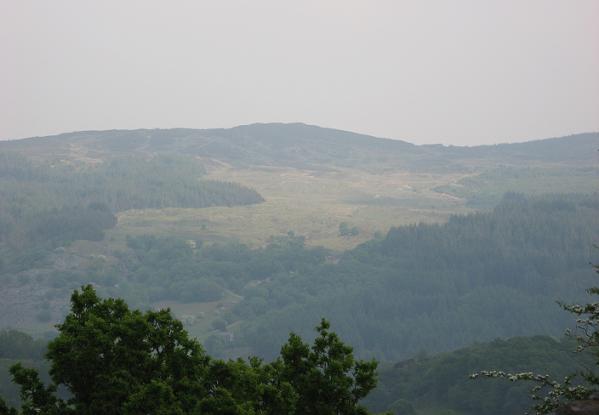 Welsh landscape near Dolwyddelan
The men who gave Henry such a hard time were Owain I of Gwynedd and his son Dafydd. Cadwaladr who meanwhile had married a sister of Gilbert de Clare 2nd Earl of Hertford, fought on Henry's side. Despite his advantageous position, Owain made peace with Henry, rendered homage to the king for Gwynedd, sent two of his sons to England as hostages (not Dafydd, though) and restored Cadwaladr to his share of Gwynedd, probably muttering something about shared heritages being a stupid idea under his breath.

But it turned out Owain had been bidding time. During Henry's quarrel with Thomas Becket, he started a revolt (in 1163), together with Rhys ap Gruffydd of Deheubarth. Cadwaladr acted as Owain's second-in-command this time. Wales came up with the best Welsh weather it could manage, and Henry's splendid army got stuck in the morass of a Welsh valley. He could join Varus in blaming the rain, bogs and trees for his defeat. Unfortunately, his Angevin temper got the better of Henry and he had some 20 hostages mutilated, among them Owain's sons.

Owain continued to keep some stability in Gwynedd. No army fought north of the Conwy river in his time. Owain also was the first to call himself Prince of Gwynedd. 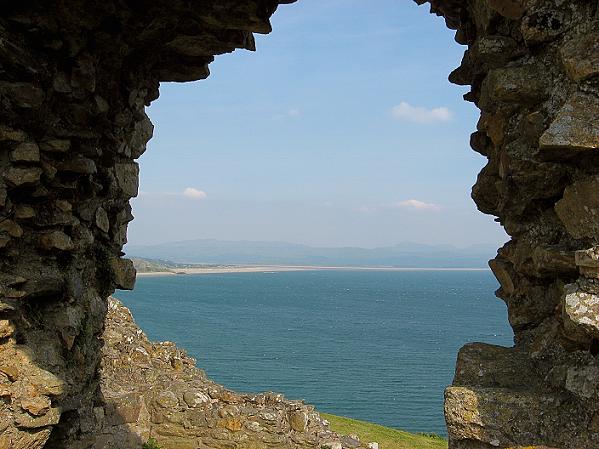 Criccieth Castle, view from the outer gatehouse over Tremadog Bay
(No Irish fleet in sight, though.)
When Owain died in 1170, he left behind a few too many sons by several wives and concubines. According to Welsh law, both legitimate and illegitimate sons could inherit, which would lead to trouble in the generations to follow.

Owain had proclaimed Hywel his heir, the surviving son he had with an Irish woman (there's some dispute whether the allegation she was a concubine was not made up by some of the other sons). He most likely wanted to keep the strong connections between the rulers of Gwynedd and the Irish of Dublin intact - you never know when you have to flee there again, lol. Two other sons, Dafydd and Rhodri were the offspring of Owain's marriage to Cristin ferch Goronwy, his cousin once removed; a marriage the Church didn't acknowledge because of consanguinity. The only undisputed legitimate sons were Iorweth and Maelgwyn he had with Gladys ferch Llywarch. 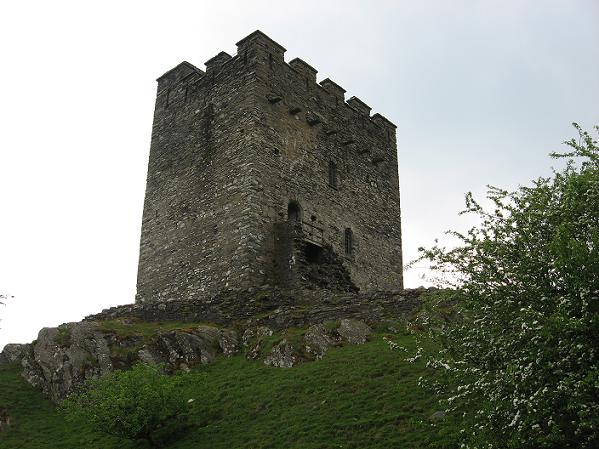 Dolwyddelan Castle, Llywelyn's Keep
Iorweth and Maelgwyn first killed Hywel in a battle. Unfortunately, Iorweth took a fatal wound in that fight himself and died in 1174, leaving his infant son Llywelyn the prey of his big cousins. Llywelyn's mother remarried into a ruling Powys family.

Dafydd, Rhodri and Maelgwyn seem to have shared the lands of their father between them (with several other half-brothers getting little bits as well), but soon Dafydd drove Maelgwyn out of Anglesey. His further fate is not know, though he probably fled to Ireland. Next Dafydd "seized through treason" his brother Rhodri and imprisoned him.

You know the routine by now, don't you? Rhodri escaped from prison in 1175, gathered an army and drove Dafydd out of Anglesey. The brothers decided to divide the lands between them - Dafydd got the lands north of the Conwy river to the Dee, and Rhodri got Anglesey and the lands south of the Conwy - an arrangement that would surprisngly hold almost 20 years. It was not Dafydd who caused trouble but the sons of another half-brother, Cynan, who chased Rhodri into exile on Man in 1194. 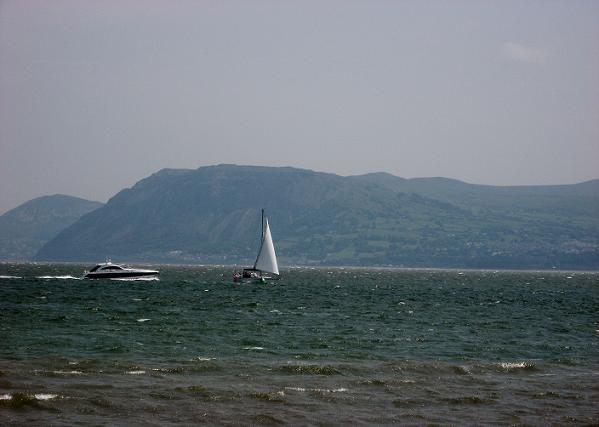 View from Anglesey to the mainland
The man who would cause Dafydd's downfall was his nephew Llywelyn.

Llywelyn 'the Great' also built Dolwyddelan Castle and parts of Criccieth Castle we can see today. There will be more about him and his dysfunctional sons in another post.

Comments:
Thanks for one of the clearest and most entertaining histories of medieval Wales I've come across :)

fascinating story, and lovely pics - really looking forward to the next part!

They didn't invent it - I could cite Tostig Godwinsson who (indirectly) did for brother Harold at Stamford Bridge, and there are family squabbles among the English kingdoms in the seventh century - but they certainly developed it to a fine art :-) It seems to have been a very long tradition, too; if I remember rightly Julius Caesar and/or Claudius were invited (or claimed to be invited) over to Britain by squabbling brothers or cousins, not to mention that the legendary Arthur was brought down by his son/nephew.

Those are spectacular photographs, especially Criccieth.

How lovely to see my homeland on your blog. There are so many castles in Wales, and most are in a bad state of decay.

And should there be any golf fans here, it doesn't rain like that ALL the time - just most of the time :>

Thanks, Annis. I tried my best to sort out the mess. :)

Carla, we can add Arminius who, according to Tacitus, was killed by his relatives. I suspect his uncle Ingviomer was somehow involved.

Anerje, I actually had luck with the weather. Only two rainy days in 2 weeks - that's not a bad average for Wales. There was more rain at the Rhine this spring. ;)

Early medieval Scots kings were constantly murdered by their uncles, nephews and cousins as well.

Who needs enemies when you have family? :)