7 Nov 2010
Romantic Mills
Autumn has released the rains and storms now, and the days are getting shorter. But last Sunday was still beautiful, so we took a little trip to the European Bread Museum in Ebergötzen. The museum is situated in a park with some mills, old trees, and other features that make for pretty photos. 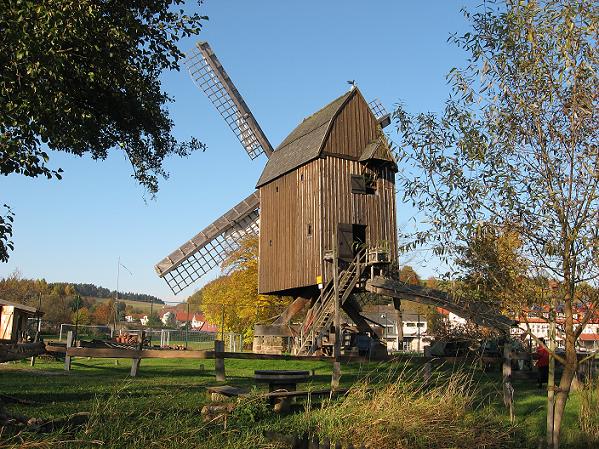 Post mills are the earliest type of wind mills in Europe (water mills are older), first appearing in the 11th and 12th centuries. The house that contains the machinery is mounted on a single post - usually oak wood and about 65 cm in diameter - which in turn is anchored in a timber stand. That way the entire body of the mill can be turned into the wind by the lever beam or tail pole. 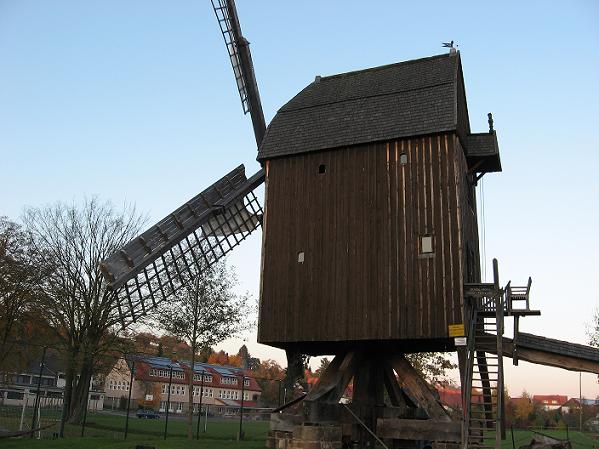 Closeup of the mill against the sky
You can see the tail pole on the right, opposite the sails. The miller turned the mill around while we were there. He used a tractor - I'm not sure what has been used in former times, anything from humans to oxen and horses, I suppose.

I went up the stairs to get inside. It was a bit scary because the staircase moves with the mill and is not anchored in the ground and thus swayed with every step. But the view from above was worth the climb. 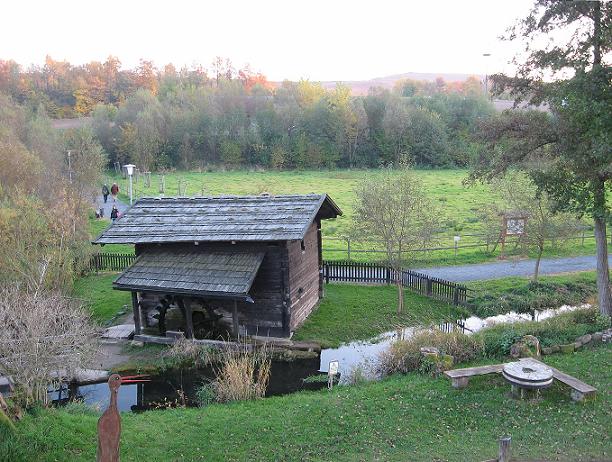 View to the water mill from the balcony of the post mill
Post mills were in use until the 19th century when steam technology and later electricity started to drive the engines of mills. But a number of them survived in museums all over Europe. In England they're also called stob mills.

The Bockwindmühle in the museum park was built in the Hannover area in 1812 and made it to another museum after it was no longer used. In 2004, the mill was relocated to the European Bread Museum and is today fully functional. 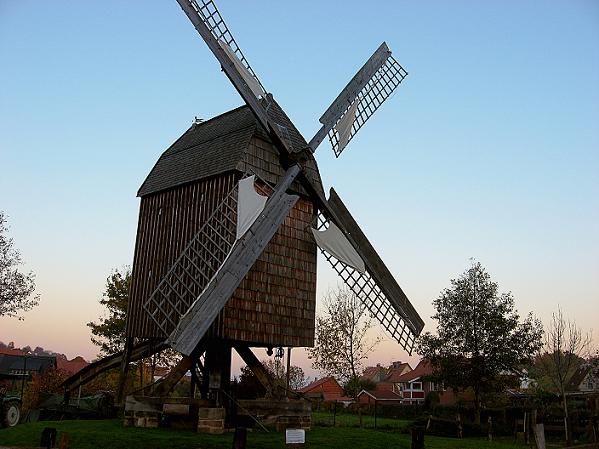 Post mill after turning
The European Bread Museum - openend in 2004 - displays exhibits about the history of bread-making and related subjects (processing of grain, milling, baking) under the motto From Grain to Bread. The artifacts encompass 8000 years of history from a reconstructed Neolithic oven to post-war toasters. There are demonstrations at scheduled times as well but we didn't witness any. But I'll watch out and go back to the place if they are ever going to use the reconstructed Roman oven. 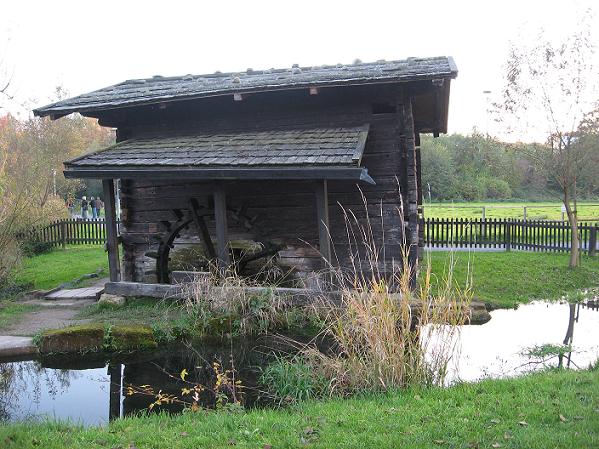 The water mill
The water mill originally came from the Alpes and was brought to another German museum in 1971, and then moved to Ebergötzen in 2004. The mill has an undershot wheel (the water is moving beneath the wheel to drive it). The technology represents a very old type of mill; already the Romans used those. 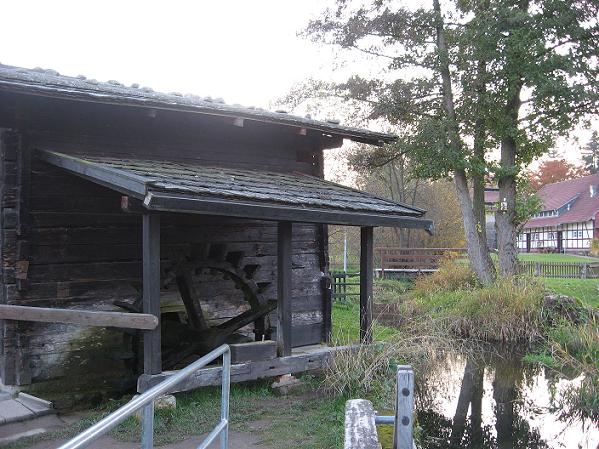 Another view of the water mill
There are other interesting things to be found, like old harvesting machines, models of mills, a grain garden (which only shows freshly ploughed earth at this time of the year), and beautiful old trees. The place of the museum had been a park with an arboretum before and the exhibits were integrated in the setting. There's a nice café with its own bakery as well. 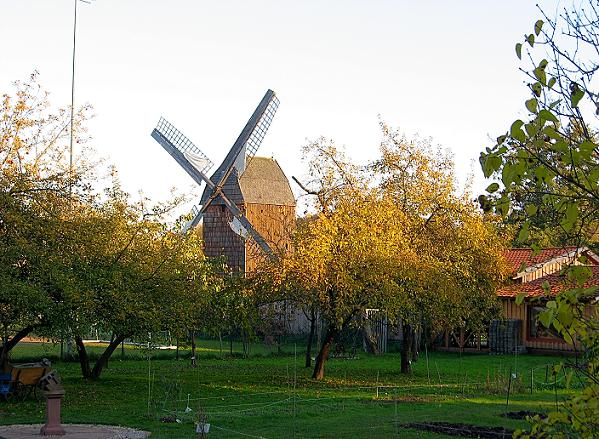 View to the post mill from the grain garden
The late autum afternoon made for such a beautiful, quiet atmosphere, almost like going back in time when the harvest was still done with a scythe and the waggon to bring the grain home was drawn by oxen, where women would sit and spin beside the door to catch the last warm rays of the sun. 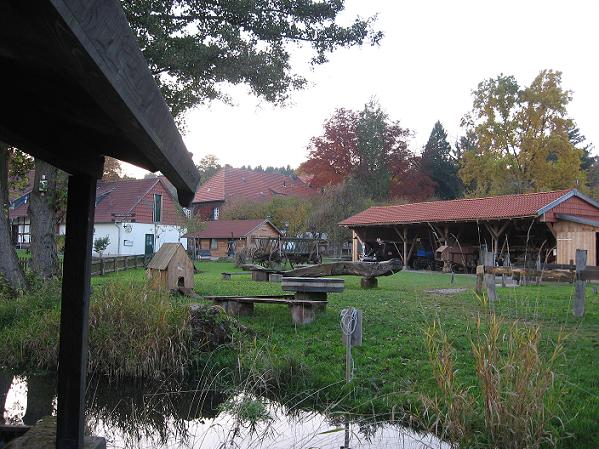 Other buildings in the park
View from the water mill to the park. In the foreground is the carriage house with the old machines, and the large roof in the background is the Baroque building that houses the main museum. It had once been the seat of the forester.   ¶ November 07, 2010

Comments:
Have to say Gabriele, you take stunning pictures!

Not that I don't like castles and Churchs, but the change of pace is nice.

What a fascinating place! Don't quite know if I'd dare go up the swaying staircase though...! But I'm sure the lovely view is worth the scariness. :-)

Beautiful photographs. I think some post mills could be turned by the miller heaving on the lever beam - it probably depended on the leverage and the size of the mill.

Hank, there are non-castle and church things around here, but the problem is that I gravitate to those. And the Romans, of course. :)

Kathryn, I'm still mad at myself that I didn't dare go up the Eagle Tower in Caernarfon and I climb every damn tower/staircase since then.

Carla, and the size of the miller. :)