31 Jan 2011
Further Development of Roman Helmets
I got some more helmets for you, but since the first post about Roman helmets was going to become pretty long already, I saved them for another one. So here we go.

One feature of Imperial Gallic helmets I didn't mention before is the 'eyebrow' decoration above the brow reinforce ridge. Since I mostly photographed the Weisenau helmets from the side because you can better see the neckguard and cheek pieces, the front decoration remained invisible. But here's a front shot that shows this particular fashion of Roman helmet design. Those eyebrows could flare out to the sides of the skull (see the second helmet, the Weisenau from Haltern, in the first post where they almost meet in the back - must have been the Lagerfeld version). 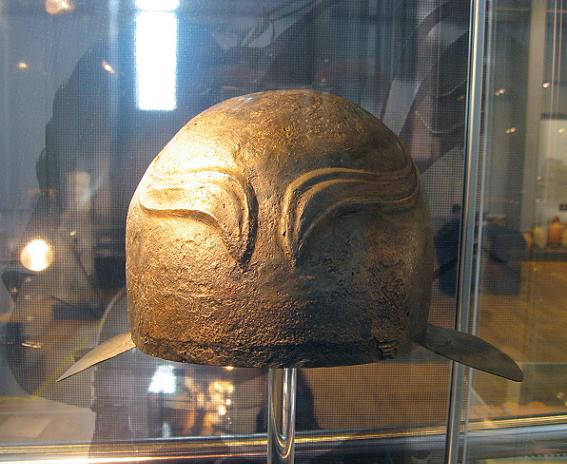 The next helm type that became popular and replaced - at least partly - the Imperial Gallic models - was the intercisca or ridge helmet (Bügelhelm in German). The intercisca is made of two separate pieces that are held together by a riveted ridge along the skull; that ridge can end in a noseguard. The bowl shaped helmet usually has cheek pieces and a neck protection as well, though the neckguard is much smaller than on the Weisenau types and the additional pieces are always connected by leather thongs, no longer by hinges.

Ridge helmets were usually made of iron and often decorated with silver or gilt sheathing. The first depiction of an intercisca appears on coins issued by Constantine the Great (AD 272 - 337) and became increasingly popular during the 4th century with a number of finds spread all over the empire, until they were replaced by the Spangenhelm, a model that would last into the early Middle Ages. 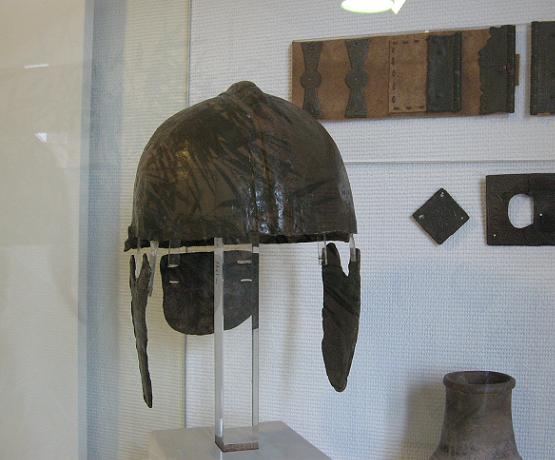 Late Roman ridge helmet, originally silvered; Worms
The spangenhelm (yes, another word the English language met and liked) further developed the technique of riveting several pieces together. A spangenhelm consists of a metal headband and 4 -6 metal strips (Spangen) that curve up into a conical shape and end in a point. The segments betweeen those strips are filled by bronze or steel plates. Those helmets could be gilded or otherwise decorated.

The front part of the headband often included a nasal and brow protection ridges. Cheek pieces made of leather or metal were added as well as a mail neckguard which was more flexible than the older plate ones. Some spangenhelms included a face mask - the famous helmet of Sutton Hoo is a fine example of an intricately decorated spangenhelm with eyebrow ridges and face mask. We're almost back to the 1st century AD Roman cavalry helmets. 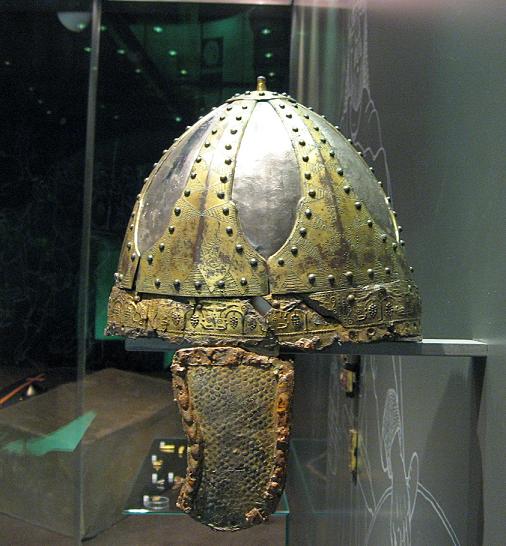 6th century Spangenhelm; Landesmuseum Mainz
The spangenhelm was the most common helmet in Europe from Late Antiquity to the early Middle Ages. The example I got for you is from an early 6th century Merovingian grave - the Fürstengrab of Planig. The burial included a number of precious items, among them the gilded spangenhelm, a jewel incrusted sword, and other weapons and shiny things; surely the grave of a nobleman or prince. A reconstruction shows the helmet with a horsetail crest but I'm not sure how accurate that is.

There are some depictions of what looks like spangenhelmets worn by the Sarmathian cataphracti, the heavy armoured cavalry, on the Traian Column. Thus that sort of helmet seems to have been known already in the 1st and 2nd centuries AD though no finds from that earlier time have yet come to light.  ¶ January 31, 2011

Comments:
Great post and again its so good to see the actual helmets and make that connection with history.

Love that top helmet! I was interested to read recently that some of the Mainz legionaries have dolphin reliefs on their helmets, in much the same fashion, possibly because they were from I Adriutrix.

Interesting, especially the early appearance of the Spangenhelm type, long before its widespread adoption. Do you think the factor in its adoption is functionality or fashion? I mean, does it offer better protection, is it easier to make, or was it just excitingly barbarian at a point when that was becoming the colour of Roman military service?

Thank you, Paul and Simon.

Jonathan, I don't know what sort of helmet is more easily made - maybe Stag can answer that. The Monterfortino and the Coolus were mass productions, and maybe the Weisenau at a later time (the first exemplars are assumed to have been special commissions for officers). The decorated cavalry helmets would always take more works, and to a non specialist like me, the spangenhelm looks like 'more work', but maybe there are some tricks to make production easier, and there are probably less decoarated examples as well.
It could also be that the Spangen, the metal strips of the skeleton of the helmet, which look a bit like the reinforcement ridges on the late Imperial Gallic helmets (the Saalburg example) added to the protection. The fighting techniques had moved from 'poke a hole in his belly' to 'cleave his skull' by that time. :)

Interesting, thanks for the pics, they help a lot when trying to visualize. :)
Were Roman helmets custom made, or did they mass produce them to some extent?

Constance, I don't know if the spangenhelm was mass produced, but the earlier Montefortino and Hagenau types were, though the officers got handmade ones of better quality (and with more decoration).

Fascinating post, thank you. It's interesting if the spangenhelm was used so early by the Sarmatian cavalry. Could that reflect the area where it originated, i.e. could they have brought it with them?

The spangenhelm is very quick to make.
And it uses small pieces.

Later on, when trade bars were becoming more popular, they would make the helm skulls in two halves, each half being made from one trade bar.

Thanks Stag. So smaller pieces are easier to work with? I had thought it was more work because they have to be connected, but I can imagine doing the whole skull in one may pose its own problems.

Its more of a matter of materials on hand. It is easier to smelt (create from ore) a small bit of iron than a big bit of iron. And seeing as how you cannot "melt" steel, you can only forge weld pasty hot bits of them together, you get a lot of losses when you weld pieces of iron together. The value of iron was very high (exceeded silver) so losses were a concern. The process of welding causes some of the material to vanish in the form of slag and rust, so if you can simply use the little pieces, you will be money ahead.
Or another way of putting it, you can get an extra helmet or two out of your pile of bits and pieces.

I made copy (more or less!) of that spangenhelm last year, and I would not say that it would have been easier to make than a one- or two-piece helmet. The crown consists of 12 major pieces, all of which have to be carefully fitted together, then the browband has to be fitted to that. There are over 250 rivets, all of which would require hand-punched holes. Not to mention that on this type of helmet, the brass is all gilded and the iron all covered in silver foil. So there was clearly no intention of doing things cheaply!

On a one-piece helmet like the one shown at top, the whole bowl is raised (hammered from the outside) from a single piece of metal. For an experienced smith, that wouldn't be anything special. No fiddly little pieces to try to match up!

One thing to remember is that EVERYthing was hand-made back then! True, some helmets (and other items) were cranked out in huge numbers, but it wasn't quite "mass production" as we think of it today. The Gallic-style or Weisenau helmets were just as common in their day as the Coolus or Montefortino styles, and many of them show the same slap-dash and sloppy workmanship so typical of Roman army equipment. Though a few are much nicer, or were silvered, etc.

I'm not sure bloom size was a factor. Even modern experimenters with much less experience than an ancient smelter can get decent iron blooms large enough to make more than one helmet. I had also never heard of the value of iron exceeding silver--wouldn't that mean that coins should be iron and arrowheads silver, rather than the other way around?