13 Mar 2011
The Ebersburg - Part 2: The Marshals of Ebersburg, and Contested Inheritances
The Ebersburg is situated in the south-eastern Harz foothills near Nordhausen; the northernmost fortification within the realm of the landgraves of Thuringia. The castle held a garrison but was also sufficiently large and representative to host the landgrave himself on occasion. Members of the high nobility, like the king himself, did a lot of traveling to personally see to matters (like exercising high justice) in their lands. 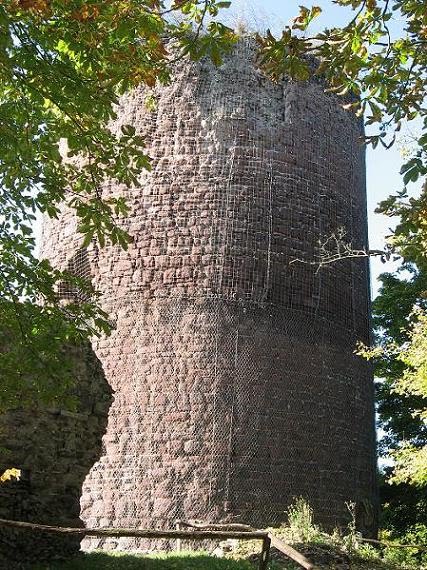 (Another view of the keep)

There is a charte issued by the Archbishop of Mainz in 1189, stating that the archbishop bought the Ebersburg from his relative, the Count Palatine Hermann of Saxony (who was also landgrave of Thuringia), for 200 mark and gave it back to him, his wife, and daughter, as fief. Two things are interesting about this, for one that the wife and daughter are included in the feudal relationship (which would cause trouble later), and second that Hermann would sell the castle in the first place. We'll see that it was an important place, so why would he sell it and receive it back as fief? Did Hermann need the money or were there political reasons for the transaction?

A proof for the importance of the Ebersburg is the fact that the chatellain (Burgmann) of the castle held the title of marshal; one name appears in several chartes: Heinricus Marscalkus de Eversberch. I've managed to hunt this Heinrich down for you. He was the son of Kunemund of Eckartsberga, one of the landgrave's ministeriales (a specific German rank of vassal) who was the chatellain of the Eckartsburg, another castle in possession of the landgrave. Heinrich appears as marshal, albeit without a place name attached, in a number of chartes since 1178. Heinrich first signs as 'de Eversberc' in a charte issued in Nordhausen in 1207.

Marshal was one of the four most important positions at court - the others were the seneshal, the treasurer and the cup-bearer. The landgraves imitated the king here and had established those offices at their court as well. Since the position af chatellain would only be filled with a marshal in case the castle was a residence for a landgrave or duke, we can conclude that the Ebersburg was more important than the remains make it look like today.

Hermann did indeed visit the castle in person in June 1216. With him were a number of Saxon and Thuringian nobles, including the counts of Hohnstein and Stolberg, the count of Clettenberg (the family had founded Walkenried Abbey), the counts of Scharzfels and Lauterberg, the lords of Arnswald-Wilrode, Creuzburg, Husen-Bischofferode, and others from the local Who's Who. The Ebersburg was a centre of the landgraves' politics in northern Thuringia and the Saxon border during the first decennies of the 13th century 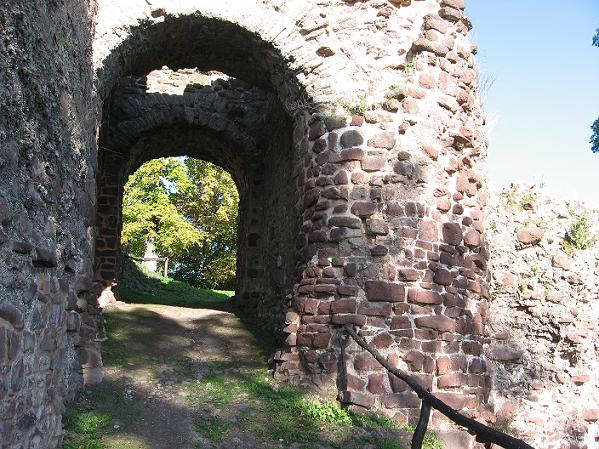 Heinrich of Ebersburg must have been dead before 1226 because his sons, Heinrich II and Kunemund, were released from a debt to the Walkenried Abbey that year.

When Landgrave Ludwig IV started out on crusade in 1227, he was accompagnied by "many knights and many other honourable people from the land of Thuringia," among them "Heynrich von Ebirsberg marschalk" (Düringische Chronik, by Johannes Rothe, 1360-1434). The same Heinrich - who contrary to his lord survived the crusade - appears at the court of Heinrich Raspe on the Wartburg, and a Marshal Heinrich of Ebersburg can be traced to the time of the Wettin line that took over as landgraves of Thuringia. There's a Hermann of Ebersburg as well, maybe a brother of Heinrich. 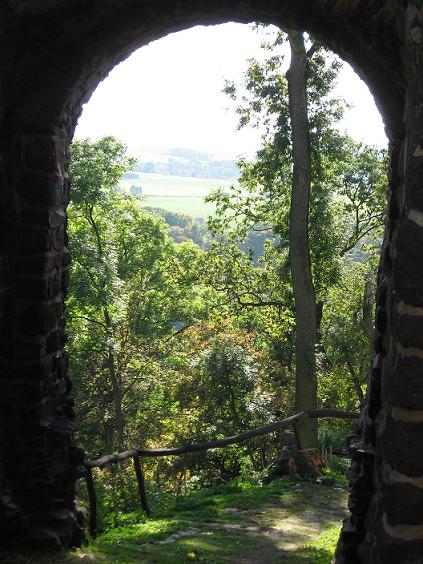 (View through the inner gate)

After Heinrich Raspe died without offspring in 1247, the fight for the heritage started. There were no heirs of the male line, but now the husbands and sons of the daughters came out of the woodworks. Landgrave Hermann I had been married twice. Jutta, a daughter of the first marriage, wed Dietrich Margrave of Meissen from the Wettin family. His second marriage to Sophie of Bavaria gave him the sons Ludwig IV and Heinrich Raspe, as well as Irmgard, who married Heinrich Count of Anhalt. And there was Sophia, Ludwig's daughter with Elisabeth of Hungary, who had married Hendrik II Duke of Brabant. Their daughter, another Elisabeth, married Duke Albrecht I of Braunschweig

Emperor Friedrich II had given the landgraviate to Heinrich 'the Illustrious' Margrave of Meissen, the son of Dietrich and Jutta, and one of his stoutest supporters. But the duke of Brabant claimed the heritage as well, on behalf of his wife and son. Moreover, since the archbishop of Mainz had given the Ebersburg as fief to Hermann and his daughter Irmgard in 1189, the three sons she had with Heinrich of Anhalt now claimed the Ebersburg and the palatine county of Saxony. I told you there would be trouble, and with three sons to share in the Anhaltinian heritage, one of them was bound to push the issue.

The result was the War of the Thuringian Succession (1247-1264) between the Margrave of Meissen, Sophie of Brabant, and the archbishop of Mainz. The latter got involved because the Hessian lands that had come to the Ludowingian family through the marriage of Ludwig I with Hedwig of Gudensberg in 1110, were held as fief from the archbishop who now considered them fallen back to him. In the end, Heinrich Margrave of Meissen got the landgraviate of Thuringia and the Thuringian / Saxon possessions while Sophie's son, another Heinrich, got the newly created landgraviate of Hessia (the lands were still held as fief from the archbishop of Mainz until 1292 when they became imperial allods).

But that was not the only trouble. In 1247, the young Siegfried of Anhalt, one of Irmgard's three sons, invaded northern Thuringia and laid siege to the Ebersburg. He built five small castles, the Too Closes (Allzunahs) in the immediate surroundings of the Ebersburg (only minor traces remain of those). Looks like the Ebersburg was a tough nut to crack - well, even the remains of the walls and the keep look impressive. But Siegfried managed to conquer the castle in 1249; and the possession remained with the family. Later, Siegfried renounced his right to the palatinate of Saxony in favour of the House Wettin in exchange for monetary recompensation. Seems that the Ebersburg was not included in that deal, though, and I could not find out if the castle was still held as fief from the archbishop of Mainz.

An interesting little tidbit: Siegfried married Katharina of Sweden, a daughter of Birger Jarl, Regent of Sweden (who founded Stockholm in 1250); and that's just one of several ties between the German and Scandinavian noblility. 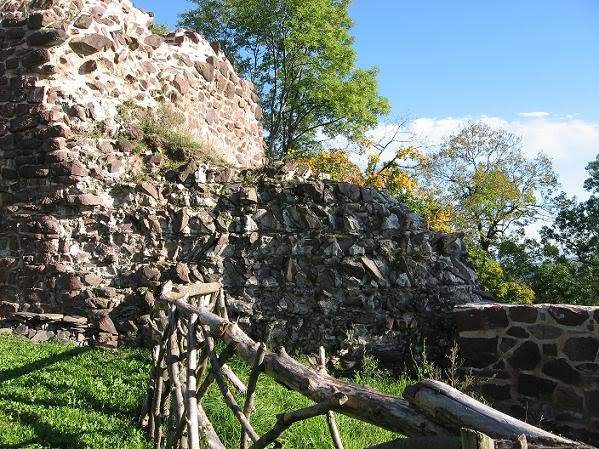 Angle between inner and outer curtain wall on the gate side
(I hope you can still follow that mess; if not feel free to ask for clarification in the comments.)

The castle was adminstered by a reeve; one 'Ludewicus advocatus de Eversborch' appears on several chartes from 1255-1267. Other reeves are not known by name. 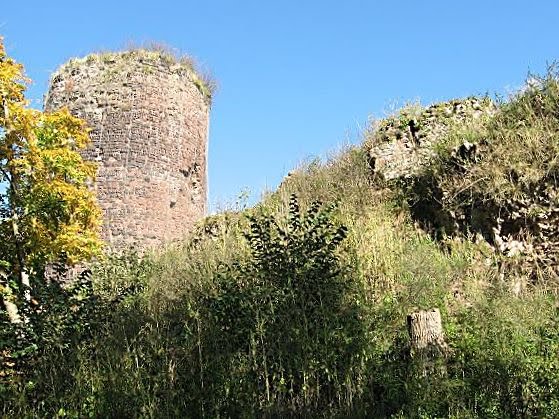 Keep seen from the Vorburg (forework)
We can glimpse some more traces of the Ebersburg during the following years. In 1326, the castle was the reason for a feud between the counts of Anhalt and the counts of Stolbeg, though I have no idea what caused it. The castle was given to the Stolberg family as result of a mediation - did the landgrave of Thurngia intervene? There's a later contract dating from 1392, between the landgrave of Thuringia, the margrave of Meissen (the lands and postitions had been divided between several sons of the House Wettin) and the Stolberg family in which it is stated that the Stolbergs would take the Ebersburg as fief from the margraves of Meissen. Looks like the archbishop of Mainz was out of the game at that point. The castle was also included in the heritage contract between the families of Stolberg and Hohnstein in 1433.

The counts of Stolberg had reeves on the Ebersburg as well, but some later mentions of 'Henricus, Hildebrandus et Thilo dicti de Ebersberg' doesn't mean that those men still lived in the castle, only that they took their name from it. The castle was clearly abandoned in 1582 at latest.

Comments:
Good pics. Imagine having something like this on ones own property!! I love it.
http://woodsrunnersdiary.blogspot.com/

Fascinating! Think I just about followed who was who. :-) I love these names; Kunemund of Eckartsberga, fantastic!

Certainly was complicated - as I know so little about that period. Very interesting though!

"In 1326, the castle was the reason for a feud between the counts of Anhalt and the counts of Stolbeg, though I have no idea what caused it." Could it have been another argument over inheritance? Following in the long tradition :-)
How you keep track of all these is a marvel.

Carla, the same way you follow all those obscure early English and Welsh kings. Lots of reading and trying to make sense of the mess the chronicles left behind. ;)