27 May 2011
Castles of the Welsh Princes - Criccieth Castle 1: Llywelyn's Buildings
I'll jump ahead a bit and leave Llywelyn the Great of House Aberffraw to another post. He is most closely connected with Dolwyddelan Castle, but I did some research on Criccieth first and that's in my notes already. I really have to clean out those and turn them into posts.

Criccieth Castle is situated on a rocky promontory overlooking Tremadog Bay. I visited it on a sunny evening and got some nice pics for you. 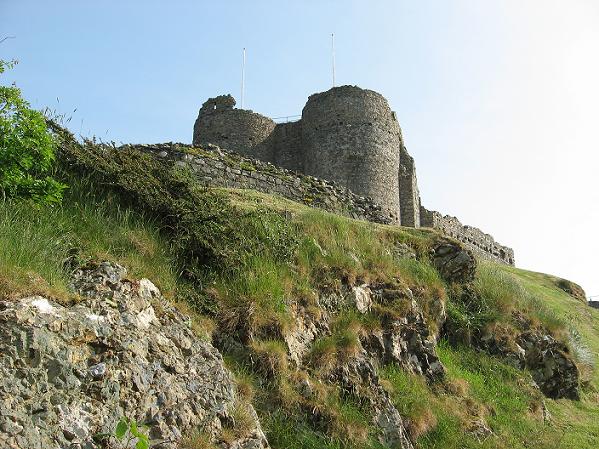 Criccieth Castle atop the cliff

It is first mentioned in Brut y Tywysogyon, a Welsh chronicle. Gruffydd ap Llywelyn was kept prisoner there by his half-brother Dafydd. They both were sons of Llywelyn the Great, but Gruffydd was born on the wrong side of the blankets, while Dafydd was the son of Llywelyn and his wife Joan, an illegitimate daughter or King John of England. Now, according to Welsh inheritance laws, it was perfectly fine for an illegitimate son to be treated the same way as legitimate offspring, and thus Gruffydd, who was the older of the two, could have become the main heir. But Llywelyn wanted to introduce the Anglonorman laws that only allowed for legitimate children to inherit (he got thumbs up from the Pope, too). Thus Dafydd got the lion share which didn't sit well with Gruffydd. He visited his brother with some friends, but Dafydd obviously had more friends, and imprisoned his troublesome half-brother in Criccieth Castle in 1239. 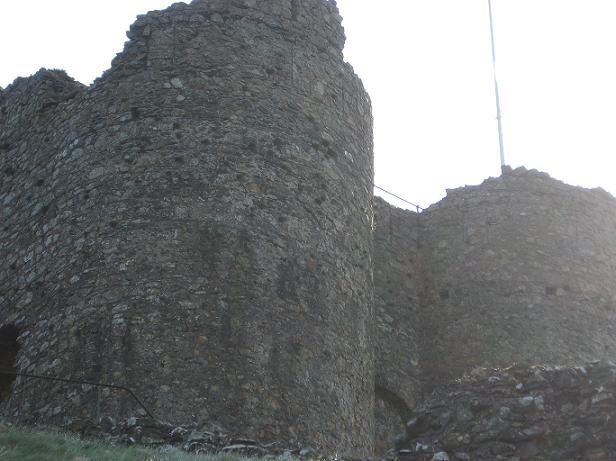 Inner Gatehouse with twin towers
The castle was built in the early 13th century by Llywelyn the Great who clearly saw the strategic advantages of the place, including the fact that the garrison could be provisioned by the sea. But the castle was extended and partly remodeled in later times, mostly under Edward I, and since several of its features are unique for a Welsh (non Norman castle), there have been discussions as to which features belong to what period.

While most scholars agree that the massive gatehouse with its two D-shaped towers and the inner ward were built by Llywelyn, some historians contend this and want to date the gatehouse to the time of Edward I because the structure appears to be too grand for a Welsh castle. 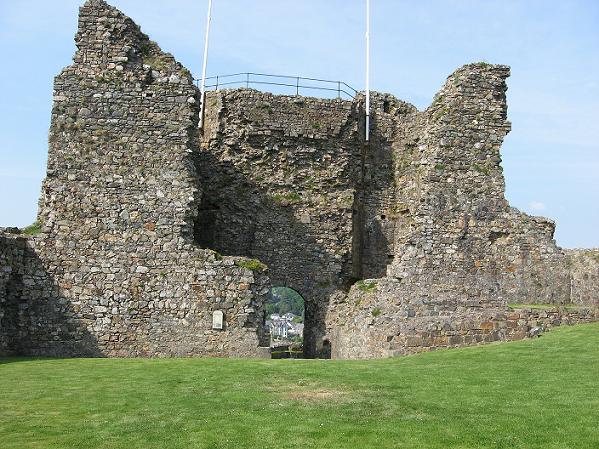 Gatehouse seen from the inner ward
But considering the rather late date of construction and Llywelyn's position and ambitions (marrying a daughter of the English king, introducing legitimate primogeniture), it is more likely that he would imitate the castles of his Norman neighbours. Maybe he even hired a Norman master mason. Moreover, a castle was also a political demonstration. The D-shaped towers were a typical Welsh feature, after all, which can also be found in fe. Castell-y-Bere - Llywelyn just built his a bit bigger. Another storey may have been added to the towers during Edward's time, though. 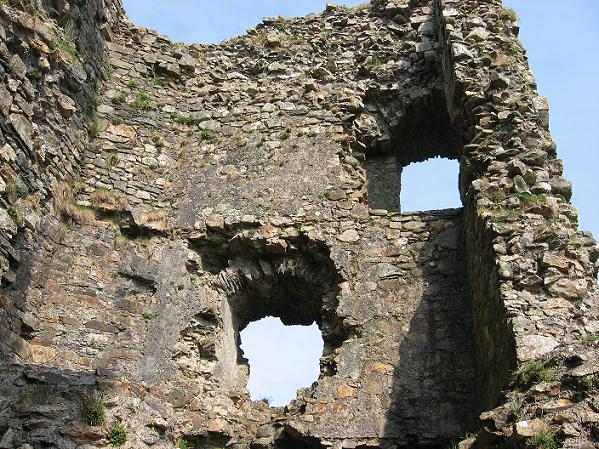 Windows in the inner gatehouse
The gatehouse of Criccieth contained a portcullis and a barred gate and was defended by arrow slits, battlements, and murder holes from where you could pour all sorts of interesting substances on enemies in the passageway. The castle well, which was supplied by a spring fed cistern, was located in the passageway as well.

Most of the interior structure has been lost, but we know there had been guard rooms on the lower level and accomodation quarters on the upper floors. One room contained a crucifix; the room was thus either used as chapel or at least held a private altar niche. Since it's the most secure place in the castle; I wonder if the captive Gruffydd had his quarters in the tower - excape would have been pretty much impossible. 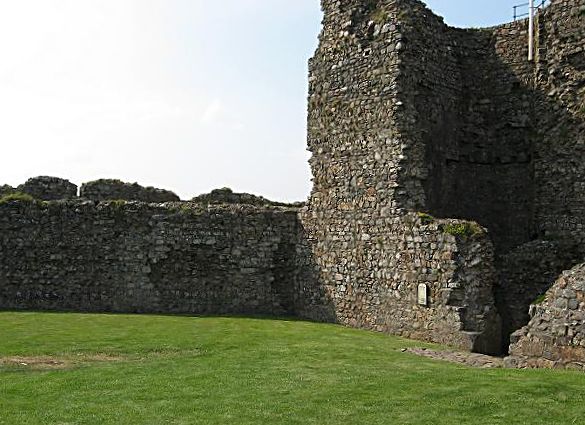 Inner curtain wall
King Henry III accepted Dafydd's claim to the throne of Gwynedd but not to his father's conquests outside Gwynedd. So David did was any good Welsh prince would have done in such a situation, he started a nice little war. Unfortunately, he lost that war and had to submit to Henry in summer 1241. One of the conditions of the ensuing Treaty of Gweneigron was that Dafydd would deliver his half-brother Gruffydd to Henry (Henry may have seen Gruffydd as potential rival to set up against Dafydd). But Gruffydd had his share of being kept prisoner in draughty towers; he tried to escape from the Tower in London good old pirate movie style on a knotted sheet, and fell to his death (1244). Maybe he should have tried to escape from Criccieth Castle instead. Dafydd died only two years later. 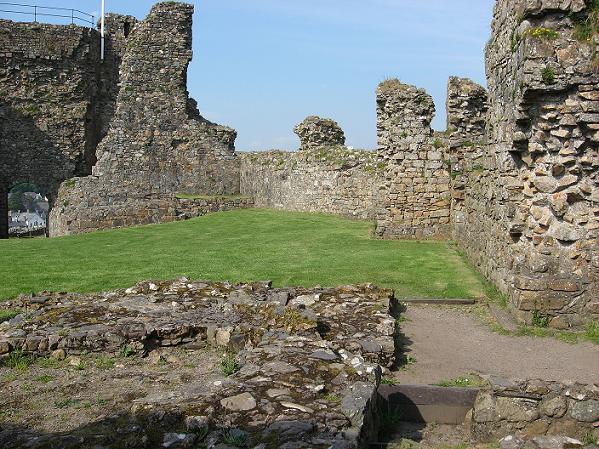 Inner Ward
Back to some more architecture. The inner ward is more or less diamond shaped and takes up the plateau on the highest point of the promontory. There were no significant defenses towards the seaside, but a curtain wall on the landside. That and the remains of stone buildings attached to the wall show the same masonry as the gate towers. The entire ward still gives an impression of a sturdy castle with no architectural laces and frills, but it is still somewhat smaller than most of the Norman ones I've seen in Wales.

Llywelyn's grandson added more buildings to the castle in the 1260ies, most notably an outer curtain wall. 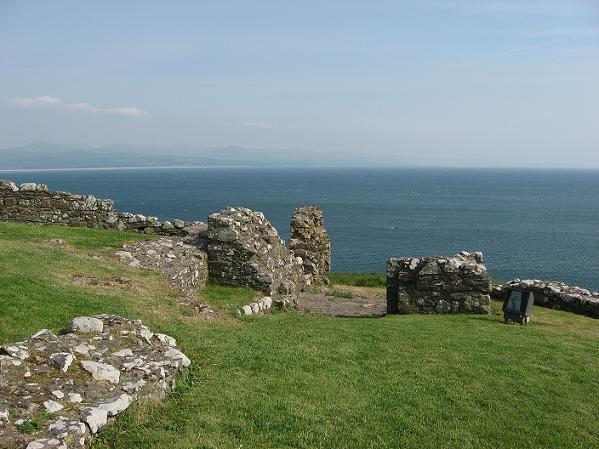 Remains of the outer curtain wall on the seaside
Llywelyn ap Gruffydd (Llywelyn the Last) was one of the sons of that unfortunate prisoner Gruffydd ap Llywellyn, and the one who came out winner when three brothers fought about the heritage of their uncle, after Dafydd had died without male offspring. Llywelyn managed to unite some other Welsh princes, in particular those of Deheubarth and Powys, against Henry III and formed an alliance with Simon de Montfort, leader of the barons that rebelled against the King. In the Treaty of Montgomery in 1267, peace between England and Wales was reached and Llywelyn recognised as Prince of Wales. But as usual, the peace was shortlived. After the death of Henry III (1272), relations between England and Wales deteriorated once again. 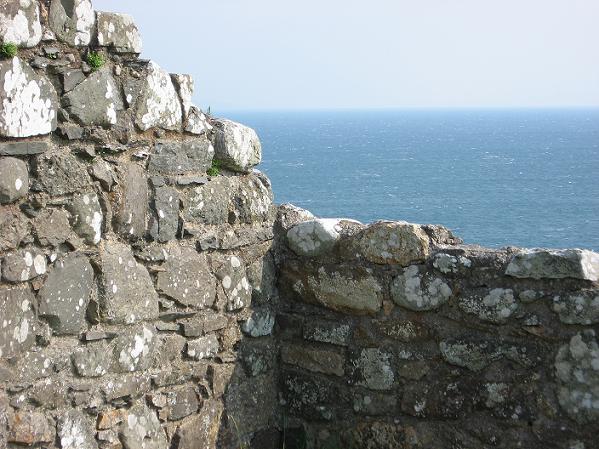 View from Montfort Tower
The wall Llywelyn the Last built encompassed the entire promontory. He also added an outer gate, protected by a tower, and a rectangular tower at the southwest corner which is also known as Montfort Tower. Of the curtain wall only ruins remain, but the tower stands almost to its original height. It had likely served as keep and held living quarters of better quality.

The second part of the history of Criccieth Castle can be found here.

Comments:
Thanks for posting this! Without sounding too much like a gushing fan, I have enjoyed any and all information and pictures pertaining to the family of Llywelyn's family and history. One day I hope to make it to Wales and enjoy all of these places, but in the meantime I can enjoy your pictures.

A castle I'd really love to visit sometime! Great pics, and a fascinating post.

Diolch yn fawr, as us Welsh would say. And yes, I'm afraid our castles aren't that grand:>

Believe it or not, though I have driven through Cricieth many times and even been along the beach on a geology field trip, I have never managed to visit the castle. It somehow got missed out when our son had his castle loving phase when he was around 10 or 11.

Ah, dear old Cymru. My Mother was Cymro & I spent a good deal of time in Wales. If there was as much freedom there as there is here, I would be there still.
Great images, thank you.
http://woodsrunnersdiary.blogspot.com/

Thank you, Elizabeth. Do you have a special connection to Llywelyn?

Kathryn, Criccieth was one of my favourite castles in Wales. Though the evening sun may have had something to do with it. ;)

Croeso, Anerje (did I get that right, lol?). Yes, compared to the Norman whoppers, the Welsh castles are smaller, but they have their own charm. I really loved Dolwyddelan.

Helen, how could you miss that, lol. Those XXL gate towers are visible from every spot near the town/beach. A reason to go back? ;)

LeLoup, yeah, Walews, Scotland, and Ireland are beautiful countries, but with a hard history.

croeso will do just fine:) I think charm is the right word.

Lovely photos of a spectacular site. The gate towers look dominant to the point of overbearing, even now, and must have been more so when they were complete and the town below was smaller. I wonder what Llewelyn's contemporaries thought of it.

Carla, I'm sure some of Llywelyn's contemporaries had mixed feelings about Criccieth, esp. the Welsh. Edward I was sufficiently impressed to use the castle himself and invest a considerable sum in makiing it even bigger (my next post will about that).