19 Jul 2011
The World's Northernmost Fortress - Vardøhus Festning
I've heard there is a heat wave in parts of the US, so I'll stay in the north and post something cold. My readers in the rainy UK may think that it could be worse - at least it's not snowing, lol.

So let's go on a little tour through the world's northernmost fortress (situated at 70°22'N) in the long twilight of an Arctic spring evening. I loved those hours; you don't get colours and shades like this here. 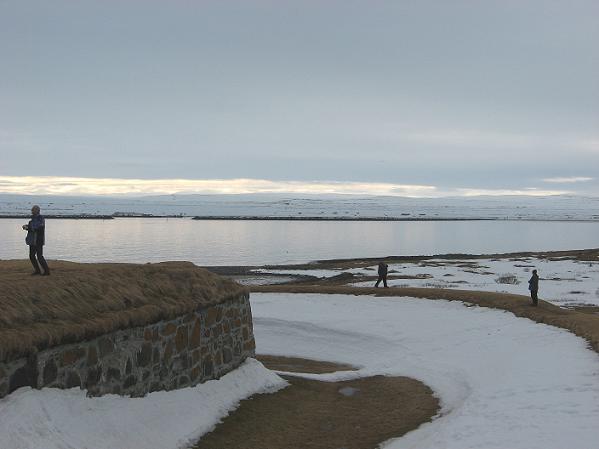 View from fort to the sea

The town Vardø is the easternmost town in Norway, located at 31°5'E, which is east of Saint Petersburg, Kiev and Istanbul. That puts Vardø (and Kirkenes) in a different timezone from Oslo, but Norway keeps one time throughout. Thus the easternmost towns are 1.20 hours ahead and at odds with daylight hours (though with the polar night and the midnight sun, that's only an issue for a few months in spring and autumn). The night before there had been dawn already at 2.30 am which did feel a bit odd, but the daylight was out of sync with Germany already in Bergen - the sun sets later in the north past equinox; I remembered that from the time I lived in Stockholm. 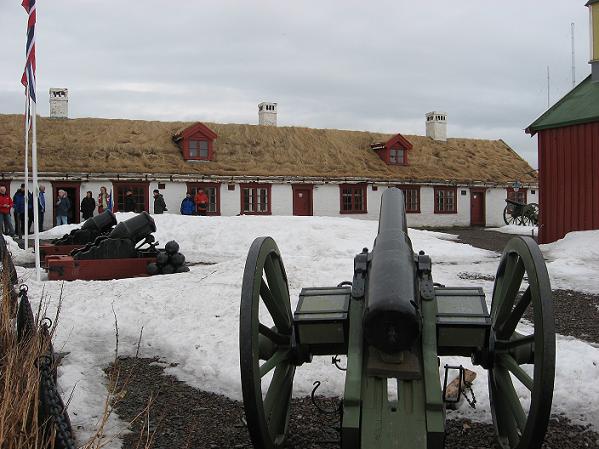 View to the garrison barrack
Vardø lies on an island that is separated from the mainland by the 1.7 kilometres wide Bussesund. The town is connected with the mainland by a tunnel under the sea since 1984. Vardø is the starting point of the E75, the Europe Road that goes all the way to Sitia on Crete (4,340 km).

There is proof for human presence in the area dating back to Neolithic times, but Vardø as a settlement grew with the fortress from 1306 onward and became a town in 1738. It was destroyed during WW2 (though the fortress itself was only damaged) and there were plans to rebuild Vardø on the mainland, but in the end it remained where it had always been. 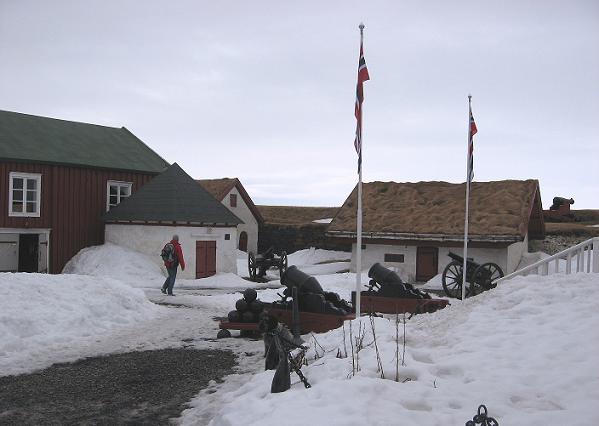 Main storage building (left) and well house
Vardø is port of call for the Hurtigruten ships. The harbour remains free of ice all year thanks to the North Atlantic drift, the little brother of the Gulf Stream. Passengers usually have some time to briefly explore the fortress, but we were lucky; the ship had made good progress thanks to the calm Barent Sea and was ahead of schedule, so those interested got a guided tour.

We were met by a man in uniform, carrying a banner on a pole, with the crisp air and fast stride of an ex-centurion. "Follow me!" He actually said it in German because the majority of the passengers were German, and the rest got it anyway. Drill sergeants do that to people. 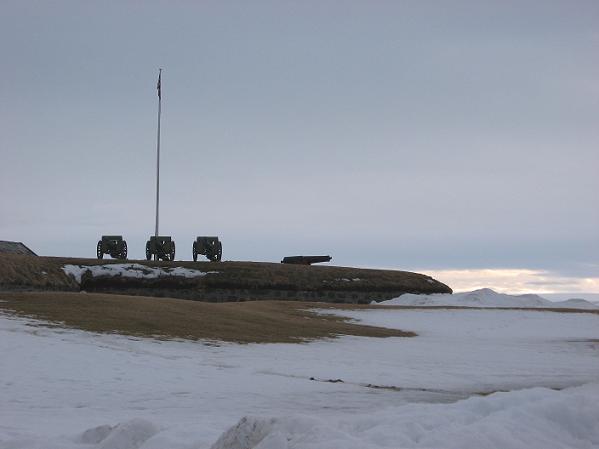 One of the batteries in the twilight
The first fortress on the site dates back to 1306 and was built by King Håkon V Magnusson in reaction to decades of border skirmishes between Norway and the Republic of Novgorod, at the time stretching from the Baltic Sea to the Ural. There never was an actual war, but conflicts about the tribute of Sami tribes. The Sami are a people living in the northern parts of Norway, Sweden, Finland and Russia (not to be confused with the Eskimo / Inuit in Siberia, Alaska, Canada and Greenland) - the area is today refered to as Sápmi.

They were knows already to the Romans, though only from tales of traders and such - even the Romans didn't go that far north. Tacitus - in his Germania - refers to the Sami as Fenni (hence the names like Finnmark and Finland). 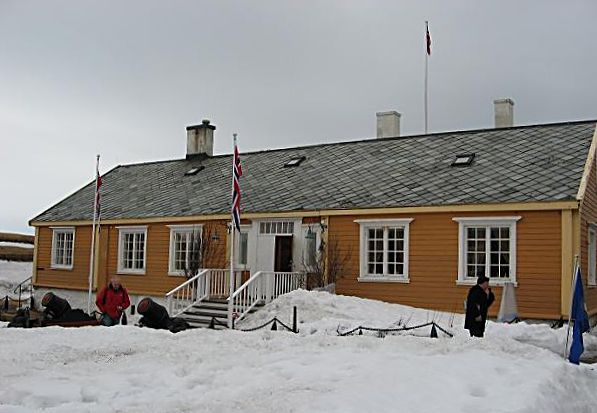 Commander's residence
The conflict was an overspill of the war between Novgorod and Sweden about Karelia, a Sami-inhabited region (today diveded between Finland and Russia). The borders of Norway and Russia meet above that region until today, so it's no wonder things got a bit messy up there. Novgorod made peace with Sweden in 1223 (Treaty of Nöteborg); Karelia was divided between the two. In 1326, Novgorod and Norway also came to terms in the Treaty of Novgorod where it was decided which Sami tribes should pay tribute to which country, and thus a bufferzone was shaped - with the Sami the losers. That treaty actually held until the 19th century.

If you wonder why people would fight over a land with snow for six month and darkness for three .... well, it's about trade, fur and stockfish in particular. The fur trade eventually went over Novgorod (since fur came mostly form Karelia), a member of the Hansa League, while the stockfish trade remained with Norway and went via Bergen, another member of the Hansa League. Guess who was the real winner here. :) 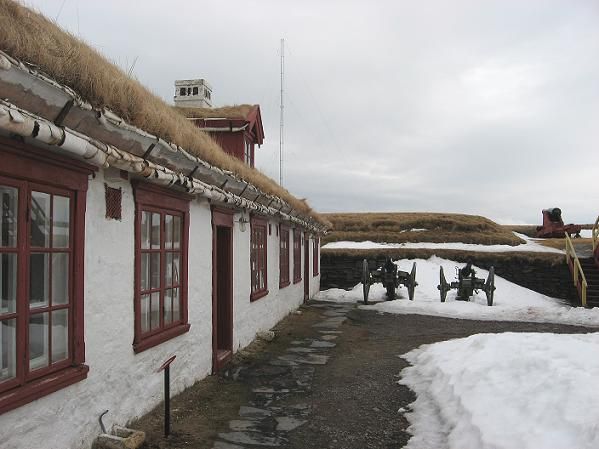 The garrison barrack, today the museum
The first fortification - founded by King Håkon V - was a rectangular structure of 30 x 40 metres, with 4 metres high walls, and palisades. Within were a row of buildings and a well. The buildings probably didn't look very different from the grass-roofed timber houses you can still see besides the more modern buildings like the commander's residence. The Mediaeval houses I've seen in the open air museum near Trondheim were not whitewashed, so one can imagine that the buildings may have looked more like those.

The Archbishop of Nidaros (Trondheim) consecrated the first church in Vardø in 1307, by which date the construction of the fortress is infered to have been 1306. 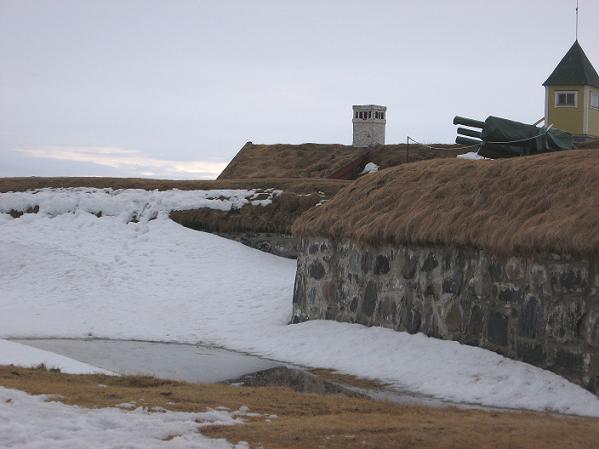 The landside fortress walls
Håkon V Magnusson (born 1270), also know as Håkon Longshanks (Háleggr), was the younger son of Magnus Lawmender and became king after the death of his brother Eirik in 1299. He's the last male descendant of the dynasty that began with Harald Fairhair (850 - 933) who united several smaller kingdoms and became the first to call himself King of Norway.

Håkon moved the capital from Nidaros to Oslo in 1314 and also built the big brother of Vardøhus fortress there, the Akershus Festning - that one really has grown over time (I've managed to get a few pics of it, too). Håkon died in 1319.

He was succeeded by Magnus IV of Sweden, son of his only legitimate daughter Ingeborg and Duke Erik Magnusson of Sweden. Magnus became king both of Sweden and Norway, a connection that was not without problems. Magnus was also the one who concluded the treaties of Nöteborg and Novgorod. 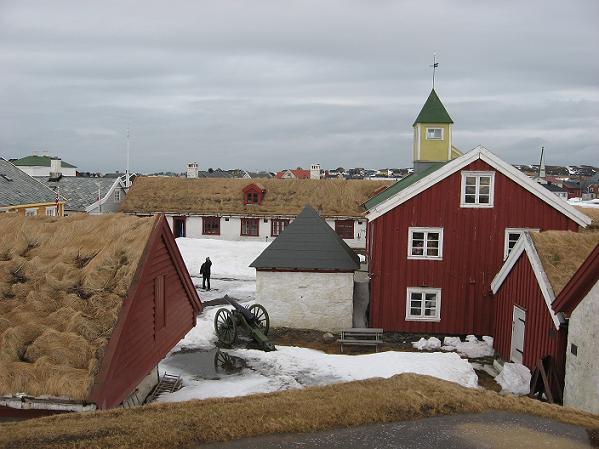 View from the walls to the fort, with the main magazine in the foreground
The second fort was moved a few hundred metres to the east, and erected around 1460. It was rectangular as well, with two corner bastions. This fortress, sometimes refered to as Østervågen (East Bay), appears on several maps from that time.

Fishing and the trade of stockfish still played an important role in the area. Stockfish, or dried cod, preserved well and it was a food allowed during Lent season. The captain of the fortress held fishing rights which obviously gave him a nice extra income. Well, you'll have to make up for sending people to such a desolate place, pretty sunsets nonewithstanding. 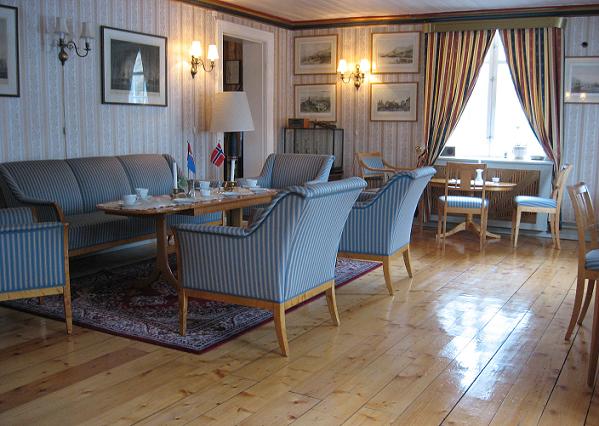 Commander's residence, interior (the 18th century drawing room)
England recognised Norway's rights to the Arctic Sea in 1583. Since then, each vessel passing from the Barent Sea into the White Sea had to stop and Vardøhus and pay duty. I don't know how many ships there were every year, but obviously enough to wrestle the taxation rights from England.

Vardø also saw some of the most severe witch processes in Norway in the 17th century; 88 women were sentenced to the pyre here. Unfortunately, I could not find out if the fortress itself played a role there, maybe as prison. 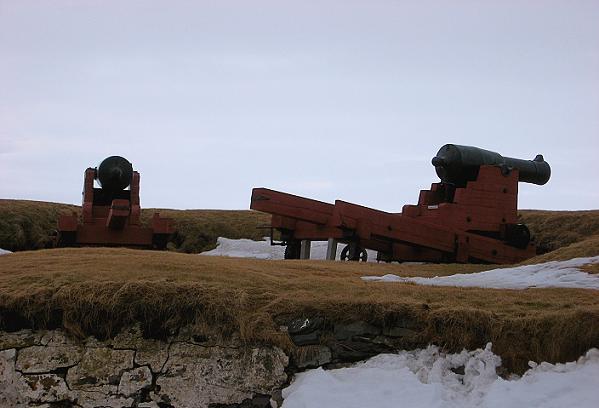 Cannons on the wall
(I went for an atmospheric shot here, since we all know what a cannon looks like.)
When King Christian IV of Danmark and Norway visited Vardø in 1599, he prefered to stay aboard his ship because the fortress obviously wasn't in best shape. Or he just didn't like grass-roofed timber houses.

Well, repairs seem to have been necessary. The fortress we can see today dates from 1738 with only minor changes since then. The fort was completely renovated and reshaped. The new design is an eight-pointed star, with a quadratic interior that houses the various buildings: commander's residence, the house for the officers, the garrison barrack, prison, main storage house, powder magazine, armory, and well house. Except for the slightly more luxurious commander's house, they are still built in the traditional way. The star shaped fortifications are earth walls supported by ashlar and armed with batteries. 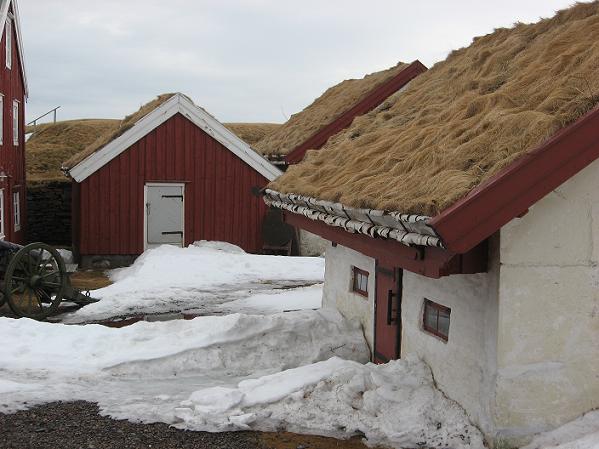 Powder magazine and armory
Cannons and all; Vardøhus never saw any action until WW2. When Germany invaded Norway, Vardøhus first served as POW camp for German prisoners, then as field hospital and as radio station. There was one German airborne attack on the fort in 1940 that damaged the radio station, but was repelled by the anti-aircraft defence missiles mounted on the fortress walls.

The Germans occupied Vardø from summerr 1940 until 1944. They added more coastal artillery defenses and used the fort as headquarter. When they retreated, they destroyed the town and dismantled the batteries along the shore, but for some reason left the fortress intact albeit a bit worse for the wear. 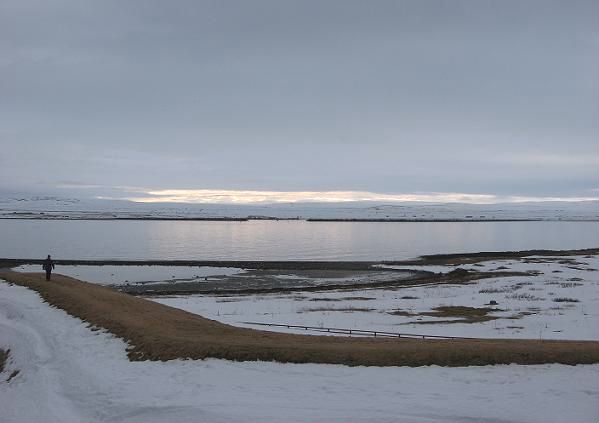 Another view from the fort to the sea
Today the fortress is subject to Akershus Command. It's still garrisoned by a commander and four men and has salute duties (National Day, royal birthdays and such). The most unusual of those is the firing of two rounds when the sun first appears in full over the horizon after the polar night on January 21. It's a holiday in northern Norway and the kids get a day off at school.

We went back aboard the ship where it was soon time for a nice dinner. Dinners usually involved fish or reindeer, and yummy desserts.   ¶ July 19, 2011

I concede that Vardohus Festning is more northerly at 70°22'N

But where Vardo has fish, we have polar bears!!!
http://en.wikipedia.org/wiki/Churchill,_Manitoba

1717 puts it pretty much in the same time frame, and it looks really nice.

Ok, you may have got polar bears, but Norway still has kings who get a salute on their birthday. ;)

That must have been a cold and remote posting!
Great photographs, as ever.

Thanks, Carla. I don't think the place was high on the list of favourite postings . :)

It may be rainy here, but it's very humid, and it's greast to see some snowy pictures:> Plus lots of interesting, different aspects of history!

Thanks, I need any thing cool. Wednesday we had 99F/37C in the shade if there was any to be found.

That following a storm with sustained huricane force winds (half way between Chicago and Milwaukee) whch put power out for four days. but it is now a comfy 32-33 degrees C.

Thanks for that refreshing interlude. I needed snow pics. :) And I learned some stuff too!

Thank you, Anerje, Hank and Constance.

Yeah, I prefer our rain and thunderstorms to the heat and hurricanes part of the US got. You always want things bigger than everyone else, it seems. :)