16 Sept 2011
Busy Life. And Some Ammonites
Life is still busy, and blogging is one of the things that got a bit of a short shift those last weeks. But I managed to drag our friend Aelius Rufus out of the baths in Trier and have him prepare a post about the Romans which I hope to publish come weekend. I also hope my private schedule will go back to something resembling normal, and blogging will return to a weekly-post routine of more substance than just rocks or monkey trees.

Meanwhile, have some pretty ammonites. 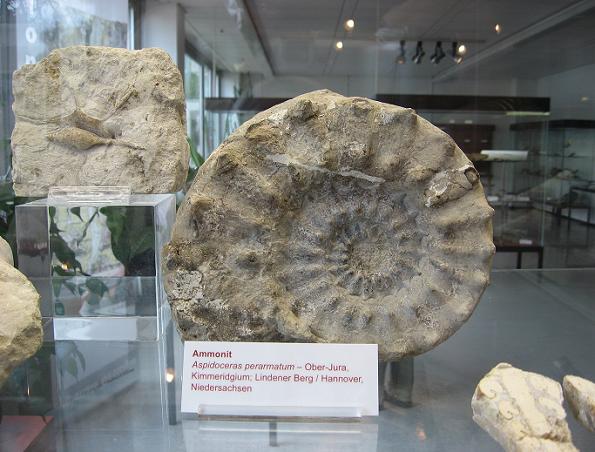 Ammonites are an extinct subclass of marine invertebrate animals, the molluscs (cephalopoda). Ammonites were around from the Early Devonian about 400 million years ago to the Late Cretaceous when they died out together with the dinosaurs 65 million years ago. Over that time, they developed some 40,000 species from tiny 1 cm cuties to 30 cm exemplars. But there were also some really big ones that could grow to two metres. 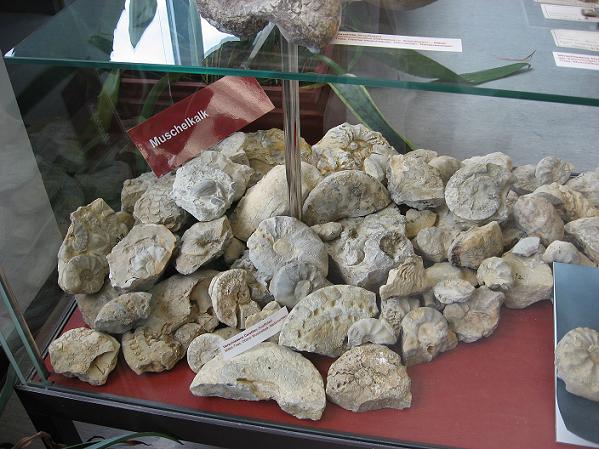 A bunch of smaller ammonites and fragments,
found in shellbearing limestone sediments in Lower Saxony
Because of their frequency, variety and distinct details of their shells, ammonites make for excelllent index fossils. Some sediments are dated solely by the ammonite types found.

And some ammonites are really whacky. The exemplars below date from the so-called Campanium, a period within the Upper Cretaceous (83.5 - 70 million years ago). 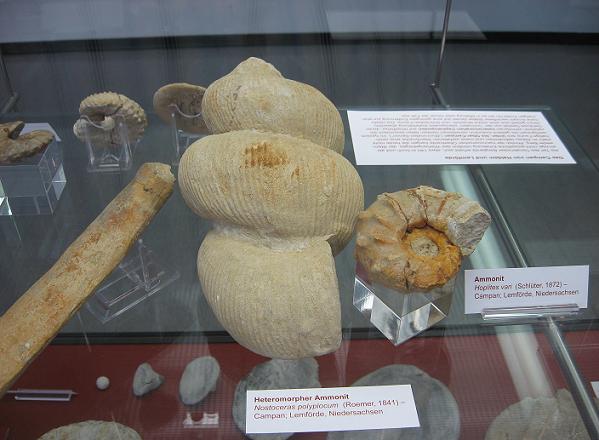 A heteromorph ammonite (nostoceras; left) and a hoplitoplacenticeras (right)
The most common form of ammonite shells are planispirals, though there also were some non spiraled and helically-spiraled forms.The front part of the shell contained the body of the ammonite, the back part the buoyant element (phragmokon). Little is known about the bodies of ammonites because the only remains fround are some jaw fragments and the traces where muscles joined the shell. We don't know how many arms an ammonite had, either, or how exactly they moved in the water. 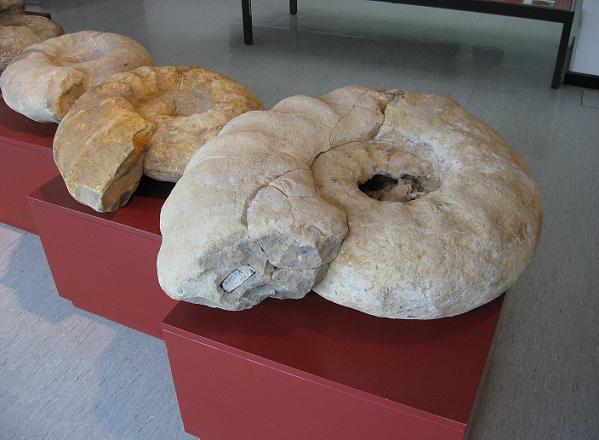 Some large ammonites
And below is the XXL model, a parapuziosa ammonite from Westphalia in Germany, with a diameter of 105 cm. The largest ammonite of this subgroup ever found (also in Germany) had a diameter of 2.50 metres. The big boy in the photo is 83 million years old, dating to the Campanium. Parapuziosa ammonites can weigh more than 3 tons because the body of the animal has been completely replaced by stone. 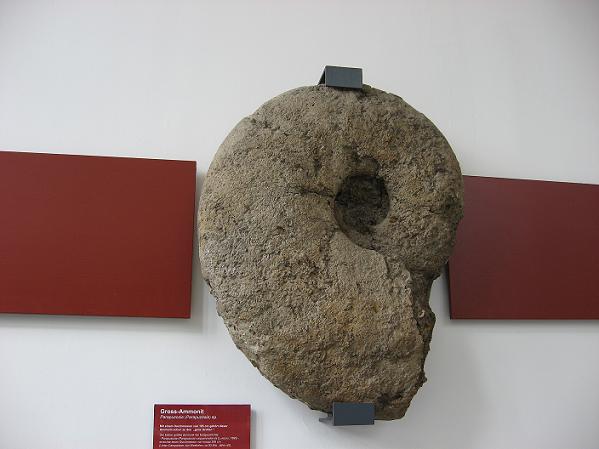 A giant - an exemplar of the parapuziosa ammonites
(Entrance Hall of the Geological Centre, University Göttingen)
The name 'ammonites' goes back to the Roman scientist Pliny the Elder (who died near Pompeii when the Vesuvius blew up in AD 79) who called the fossils ammonis cornu - horns of Ammon, the Egyptian god often depticed wearing ram's horns. I'll have to find out if the Romans understood those were fossilized animals.  ¶ September 16, 2011

Comments:
I always enjoy the pix:> I find it very difficult to produce something once a month, never mind once a week - life is just so busy! Plus, I love reading everyone else's blogs!

Nifty ammonites! And horns of a god makes perfect sense to me. :)

Ammonites are a bit of a legend at Whitby in Yorkshire. There are lots of ammonite fossils in the cliffs in the area that occasionally weather out onto the shore (along with jet, which, linking to your last post, is the fossilised remains of ancient monkey-puzzle trees). Local legend explains the ammonites with a story that St Hilda got rid of a plague of snakes by turning them into stone and throwing them over the cliffs. Whitby council has three ammonites with rather fetching (imaginary!) snakes' heads on its coat of arms.

Thank you, Anerje. It's not so much writing the posts, but doing the research that goes into my longer ones. And yes, reading other blogs it time consuming, too, which is why I'm a rather lazy commenter.

Constance, must have been a really huge god in case of those XXL ammonites. Which, btw, are most abundant in northern Germany.

Carla, that is an interesting legend. Yeah, people would want to explain those odd shaped stones, and horns of an Egyptian god didn't work so well; getting a saint involved is more along the Medieaval mindset.
So monkey puzzle trees were around in the area long ago? In that case it's even more fitting that the Botanical Garden in York has one as well. :)

Always reminds me of the legend about St Patrick banishing all the snakes from Ireland :-) St Hilda wasn't quite so successful; I came across an adder sunning itself happily on the cliff path not far from Whitby one summer.

Some information about Whitby jet and its formation here if interested. The monkey-puzzle tree in York would have had lots of company had it been around 180 million years ago :-)

Well, I like snakes so I don't mind St.Hilda not having been so successful. ;)

Thank you for the link.