17 Mar 2012
Romanesque-Byzantine-Moorish Architecture in Thuringia - Göllingen Monastery
The monastery in Göllingen in Thuringia is only a ruin, but what has survived the time proves to be an intriguing piece of Medieaval masonry as the octagonal tower on a square base shows. The crypt is very interesting, too. 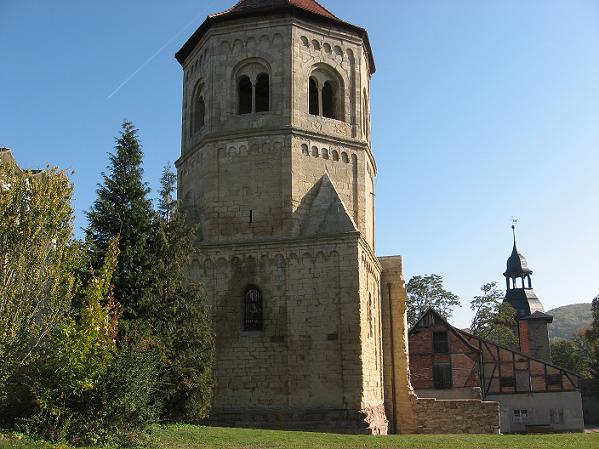 The village of Göllingen first appears in a charte of 765; there seems to have been a Carolingian crown domain at the time. The situation at the crossing of a river and the salt road from Frankenhausen likely influenced the establishment of a settlement.

The monastery, dedicated to St.Wigbert, was a filiation of the Abbey of Hersfeld and generously sponsored by Gunther of Käfernburg (count and hermit, politician and priest). The first church dates back to the late 10th century. A piece of wood surviving in the western transept wall to the right side of the tower could be dendrochronologically dated to 960-980. You can distinguish this oldest part from the later masonry by the use of ashlar and mortar instead of hewn stones. 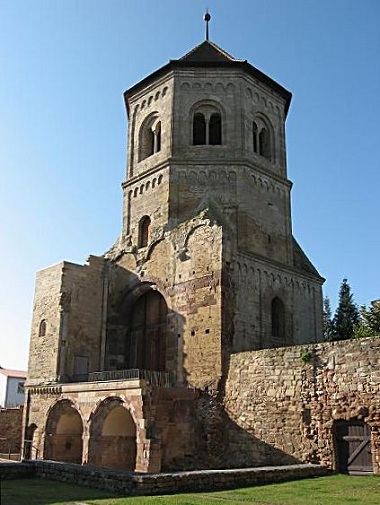 (West tower seen from the 'inside' of the church proper)

The monks of Göllingen Monastery followed the Benedictine rules and soon turned the place into a local economic centre with fishponds, vineyards, fields and forests and, most important, a system of waterworks that was neccessary for the mining of salt in nearby Frankenhausem. Among the nobles charged with the protection of the monastery as reeves was the family of Hohnstein.

With the monastery growing in size and influence, the church of course underwent some 'modernisation' in the 12th century. But it didn't develop as a typical Romanesque church, though kept a different layout (compared to f.e. the westworks of Gandersheim or Fredelsloh).

Since the master mason remains unnamed, we don't know if he was a man who had traveled and met with other architectural styles. My guess is he did; artisans could be very mobile, and we know that - to name just one example - the master mason of Königlutter Cathedral, Nicolaus of Verona, came from Italy. An influence by the crusades may be a possibility as well; the lower part of the tower dates to 1170, the octagonal part is some 50 years younger. 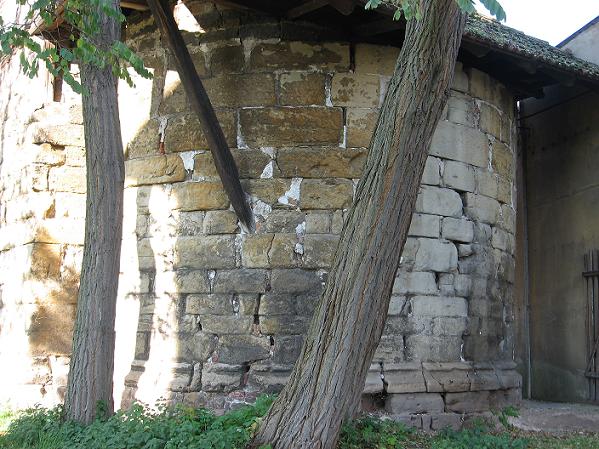 Remains of the east apse

A connection with Theophanu, the Byzantine princess who married the future Emperor Otto II in 972 has also been made, but that would be a bit early, even if the crypt is - or rather, may be - somewhat older than the rest of the tower. A Byzantine influence in the area (the nearby palatine seat of Tilleda had been Theophanu's wedding gift) doesn't hold because if there had been an influence strong enough to be active 100 years later, it should have shown in other buildings as well.

Besides the westwork with the crypt, only the eastern apse of the main nave and part of the southern transept survived because the rooms had been used as smithy in later times. The lack of windows in the remaining walls implies that the walls had originally been much higher with windows above the level of the altar so the light could shine in from above. Whether the crossing had a tower or at least an extra row of windows remains guesswork. The overall layout of the remaining foundations - often the only part that survived - shows a rather compact building of 37 metres length with two stumpy transepts and no aisles. 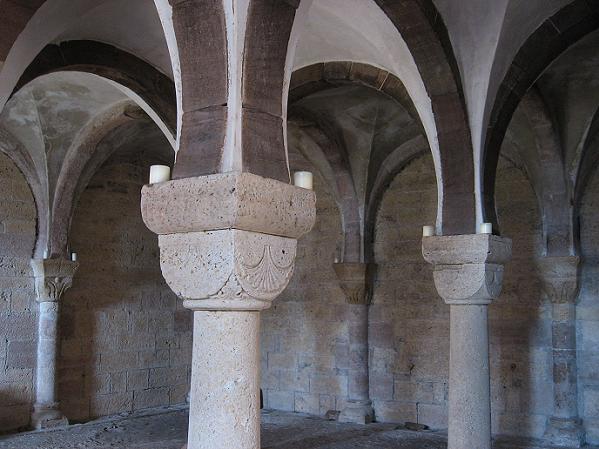 Pillars and horseshoe shaped transverse archs in the crypt

The foundation of the tower is a square of 10.30 x 10.30 metres; the cubic first floor is 11.50 metres high (not counting the crypt) and the octagonal part about the same height (12.10 m) though it seems to be higher seen from the outside angle because it's looks more slender on top of the massive base. The base is structured by pillars and red sandstone friezes to highlight the dominiating local shell limestone the tower is made of. The quality of the masonry is outstanding. This layout of a tower is pretty unique in north-eastern German architecture.

The square storey of the tower opens to a platform (the two arches below are the entrance to the crypt) which once may have been a gallery, likely for ViPs like visiting bishops or emperors. The room behind the gallery which may have held a private altar, takes up the entire ground of the square, and with a height of almost 8 metres it could have held an imperial or episcopal entourage, and it had a huge gate that could be closed. The room survived the secularisation because it was used as granary. 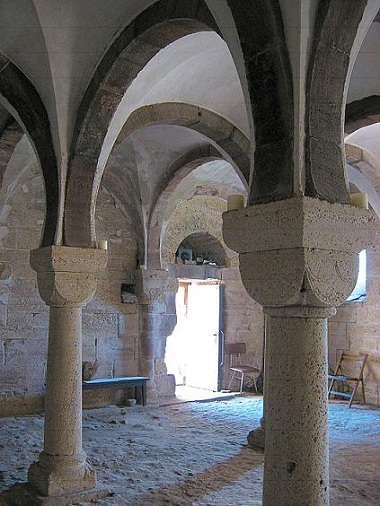 The crypt in Göllingen monastery is not a truly subterranean room but more like the high crypt we can find fe. in Lippoldsberg, though other than in Lippoldsberg, it could be closed by a double gate (there are traces of holdings for gate beams). Two steps lead down to it.

The design of the crypt is symmetrical, 8.20 x 8.20 metres with 3 x 3 nave bays with cross grain vaulting supported by four free standing pillars and the matching embedded pillars at the walls and corners. The pillars are made of shell limestone while the transverse archs are of red sandstone to set some highlights. The most interesting feature is the form of these archs, they are horseshoe shaped, and that's something you may find in southern Spain or Jerusalem, but not in Germany. The embedded pillars are made of red sandstone as well to contrast with the limestone walls (albeit the contrast is a bit faded nowadays). 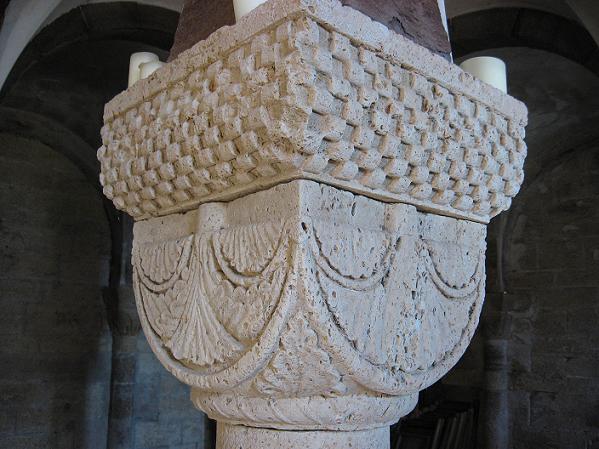 Closeup of one of the capitals

The crypt is lit only by three windows on the south side (and candles, of course); the outer windows are set slightly obliquely so that the light focusses on the space between the centre pillars.

The vault between the centre pillars is the only one that holds a closing rosette of red sandstone with a hook for a chandelier, and there are traces of smoke on the ceiling. The way the focus is drawn to the space between the four centre pillars, one can assume it may once have held an altar, a reliquary shrine, or an important sarcophagus (though not the one of its founder Gunther of Käfernburg who is buried in Prague). 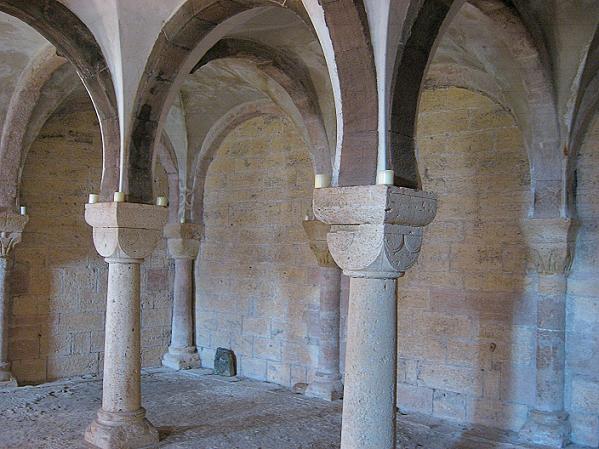 The crypt, view to some of the embedded pillars

The upper storey of the octagonal tower served ss belfry. The only access to this 13th century addition was via the roof of the western transept. This may be another proof for the special purpose of the room beneath; important guests should not be disturbed by the scurrying around of the campanologist.

Fragmented finds of Gothic architecture (parts of window tracery, pieces of capitals with Gothic designs) on the site show that the church must have been altered again in the 14th and/or 15th century, but the west tower and the crypt were well left alone. 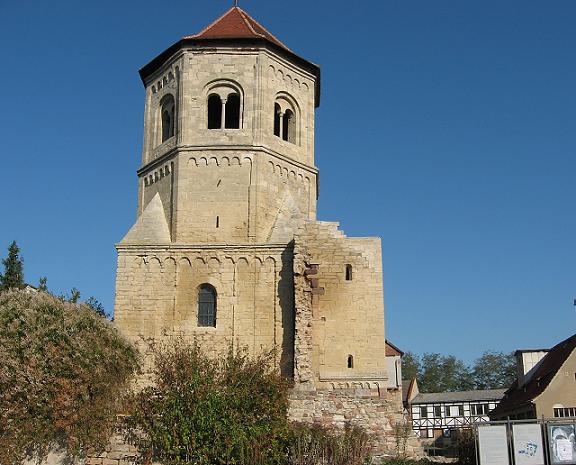 The tower seen from the south

Göllingen Monastery survived the Peasant War (Battle of Frankenhausen 1524) and the Thirty Years war, but its downfall came during the secularisation. Its then owner, the Landgrave of Hessen-Kassel who received most of the former possessions of Hersfeld Abbey in 1648, decided to turn the monastery into an agricultural property. The buildings were converted into stables and granaries, the church dismantled and the stones sold to the villagers. During the time of the GDR, the place became a cannery. The remaining parts of the Romanesque church were cared for after the reunion so that at least the tower and the crypt will survive into the future.