21 May 2013
The Imperial Palatine Seat Tilleda - Fortifications
I have mentioned Tilleda a few times already since it's one of the rare examples of a Medieaval palatine seat of which more remains than some crumbled earthen walls and a sign. Werla, albeit double the size of Tilleda shows only a few of those today, Grona has become a suburb of Göttingen, in Pöhlde only some foundations remain. Of course, most of what we can see in Tilleda has been reconstructed - earthen walls and wattle and daub houses don't preserve well - but it is the only complete complex of the sort. In Goslar, only the great hall has been restored, albeit it is a most splendid example. 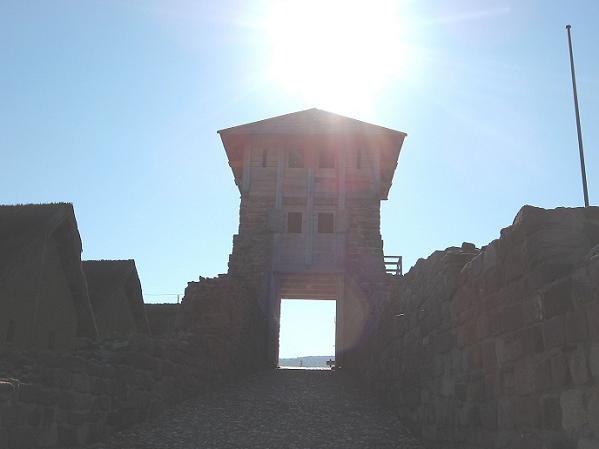 Tilleda, gate of the outer bailey. The way it is drawn in between the walls enabled the defenders to throw all sorts of pointy, hot, or otherwise interesting things on attackers.

Tilleda is first mentioned as Imperial Palatine seat (imperiatoris corte) in a charte dating to 972, where it is listed among the lands Otto II gave his wife, the Byzantine princess Theophanu, as dower. But the castle on the Pfingstberg hill must have been in existence since the early 10th century (1). But Tilleda surely was part of the net of palatine seats in Thuringia and Saxony already at the time of King Heinrich I.

Palatine seats, sometimes also known as royal vills in England, were needed because for one, the king had to show his presence to the people, second, taxes were paid in food could not be transported and stored over long distances but were eaten on the site. Therefore, Mediaeval kings did a lot of traveling and wanted to stay in places of some comfort. 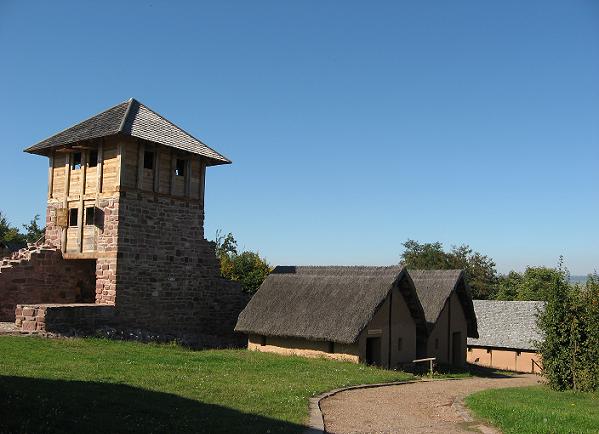 Outer gate seen from the inside with some wattle and daub houses in the foreground
The Pfingstberg hill lies north of the Kyffhäuser mountain ridge, a place that has become famous for the legend of the emperor Friedrich Barbarossa sleeping deep inside the mountain to return in time of great need. So far, no one has seen him, but he got a big, kitchy 19th century monument on top of the mountain. If that didn't wake him from of his sleep; I doubt anything will. *grin* 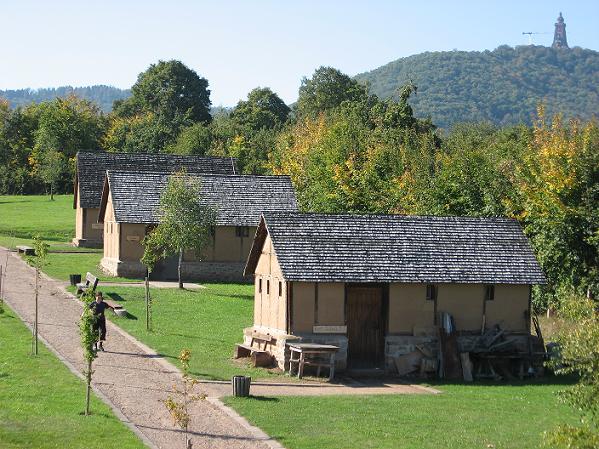 View from the gate to some houses, with the Kyffhäuser in the background
The seat of Tilleda has a trapezoid shape and covers an area of 5.6 hectares (about 350x250 metres). The part of the hill where the main castle is situated has steep slopes that go down 25 metres on three sides, they were additionally fortified by a trench and wall, partly of stone, partly as timber palisades. Only to the west the land is flatter, but still some 10 metres above the surrounding terrain where the outer bailey is situated, once protected by walls of mortared ashlar (see below). Another, second outer bailey on the southern terrace near the river Wolwede has been excavated but not reconstructed.

The ground of the hill is sandstone on a layer of Zechstein gypsum which led to a rockfall probably in the early 11th century which destroyed part of the main hall in the northeast corner of the castle. 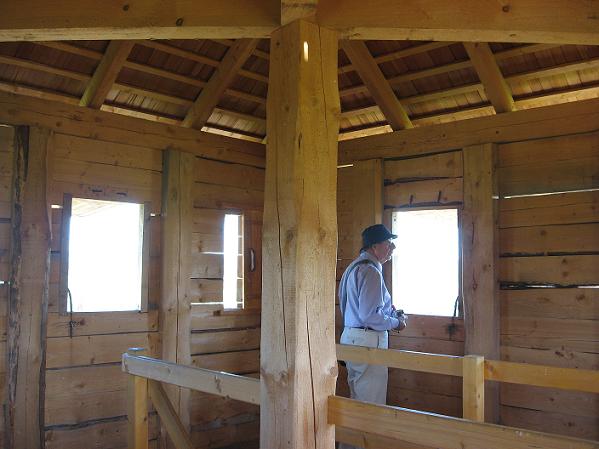 Interior of the outer gate, with my father looking out for enemies
The castle with the main hall, church and living quarters for the nobles - several of them with hypocaust heating - is separated from the outer bailey by a system of walls and trenches. Most of the buildings in the main castle were made of stone, or at least had stone foundations, though the hall was rebuilt as pillared longhouse after the rockfall. I will get back to the remains of those in another post.

The main wall with the palisades and the gate - in its second, stone version with timber upper storey - have been reconstructed, as well as one of the trenches. 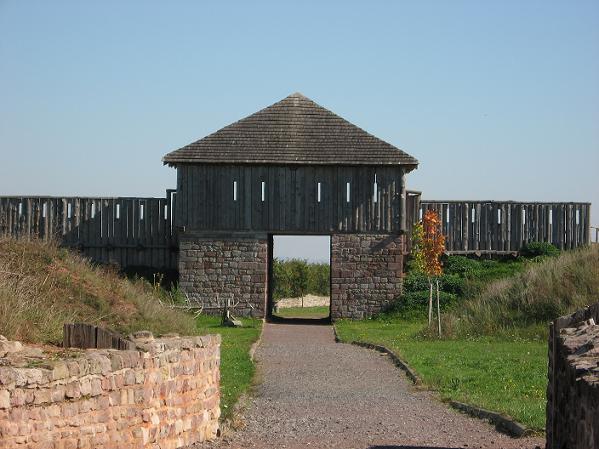 Inner gate, seen from the outer bailey
The area between the main castle and the outer bailey served as some sort of middle castle with a granary and the living quarters of the chatellain / administator during Ottonian times, but later, the fortifications were considerably strengthened. Maybe the defensive purpose of the place became more important during quarrels between kings and nobles.

We can trace a sojourn of Emperor Friedrich Barbarossa in Tilleda in 1174, and in 1194, Heinrich VI received the exiled Heinrich the Lion in a reconciliatory meeting. Considering the symbolic element inherent to such actions in the Middle Ages, it proves that Tilleda was an important place; such meetings didn't take place in some backwater village. 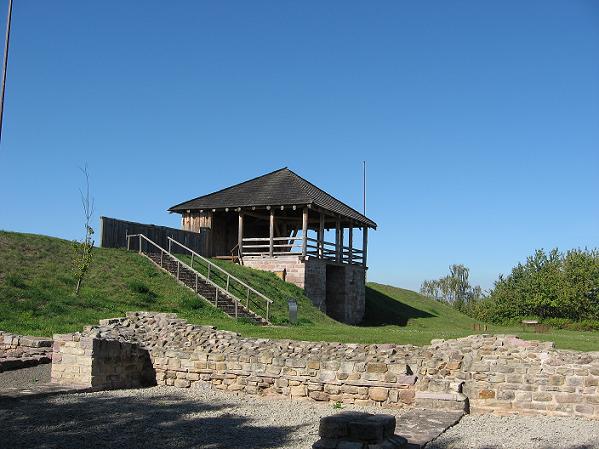 Inner gate seem from the remains of the church
The outer bailey, encompassing about 60% of the entire site, is the most typical feature of the palatine seats of itinerant rulers. This large outer bailey was protected by a wall of mortared ashlar, both of local origins (some of the gypsum pits have been excavated). These walls have later been used as quarry and were only partly reconstructed; the rest of the layout is marked by a low earthen wall. The original height of the ashlar wall is unknown.

There were a lot of houses, mostly of the wattle and daub type, but also some timbered ones, and a number of pit houses. They served as workplaces, storage huts, and living quarters for the people involved in producing pottery, weavings and iron products on which this particular seat obviously specialised. 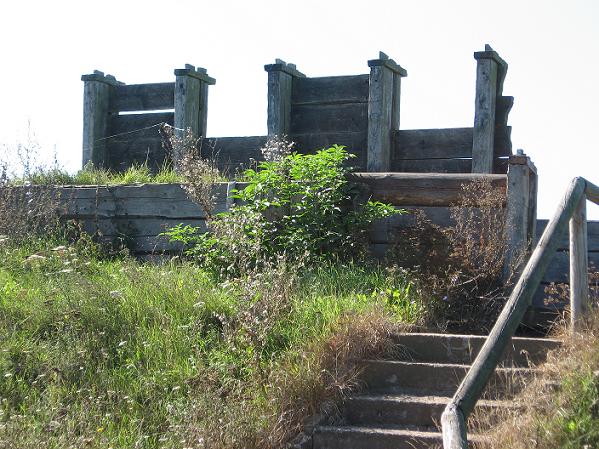 Rampart with access from the inner bailey
Tilleda was a site on the territory of the former GDR, hence the reconstruction of working class housings rather than the king's hall. I don't know if there are plans to rebuild the royal hall as well, but it would be nice if they did.

The palatine seat had been abandoned by most of its inhabitants in the 13th century. Its purpose as housing for itinerant kings became useless when those prefered to live in the better fortified hilltop castles, and the various industries moved down to the Golden Valley (Goldene Aue) where the conditions obviously were more favourable. 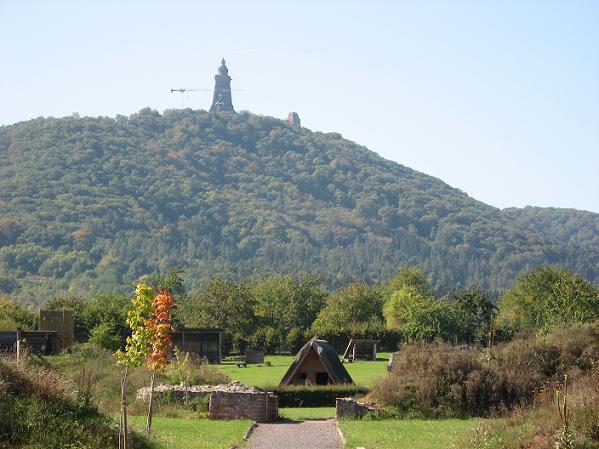 View from the inner gate to the Kyffhäuser, with a pit house in the foreground
I'll get back to that unique place and show you some of the buildings next time. Some of them house Medieaval tools (looms and such) and give some glimpse of life in the 10th/11th centuries.

1) Chartes issued in specific places and the mention of sites in chartes only give very incomplete information about those sites, since much depends on chance of both historical events and preservation.

Comments:
Really interesting post, thank you. The reconstruction is fascinating. I like it that the reconstruction concentrated on the humbler buildings. Most of those disappear totally (whereas high-status buildings may survive, even if only as ruins), so it's interesting to see how they might have looked.
It looks more spacious than I expected; I thought the houses might be more cramped together than they seem to be.

Love the pictures and love seeing the reconstruction. It's easy to imagine knocking things down, harder to imagine how they might have been before the knocking down.

This really looks impressive! And your dad looking for enemies :-) Did he spot any in the distance, BTW?

But to be serious, thank you for yet one more fascinating post!

Carla,
they didn't reconstruct the complete interior; only some examples of the various types of buildings. But the excavation map shows that there was indeed some space between the houses, the place wasn't as crowded as towns used to be.

Constance,
this place was abandoned without some big style knocking down, and the Nature came back. That one beats a trebuchet any time. :-)

Kasia,
no, only more tourists and you aren't allowed to pour boiling pitch on those, lol. But compared to the Kyffhäuser, Tilleda was a quiet place.