31 Oct 2014
More Time Travel Tours
I know I've been a bad blogger and not updated for weeks. Well, I blame a nasty cold, lots of work at the money job, a nice journey (yay) and more job work. But I've finally found time to sort my latest photo booty and share some of them with you.

Our four day tour this time led us westward, to Paderborn (which will be covered in its own post) and the the area of Lippe / Egge Mountains / Teutoburg Forest. A land equally rich in history as the Harz, with its share of castles and churches. 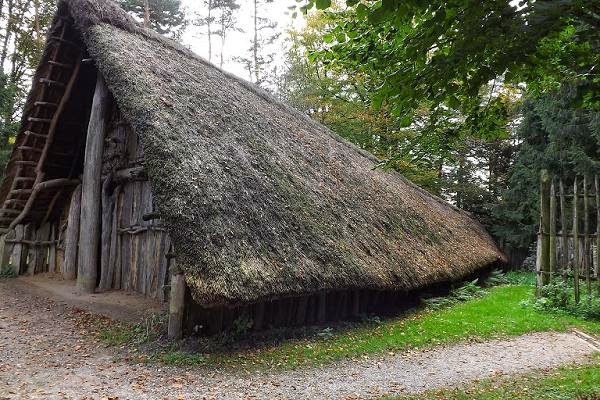 The Archaeological Open Air Museum in Oerlinghausen is a fun place and we spent a nice bit of time there. They got everything from a tent of the reindeer hunters to a 7th century Saxon long house. Since it was late into the season already, there were no performances of old crafts, but also almost no tourists. 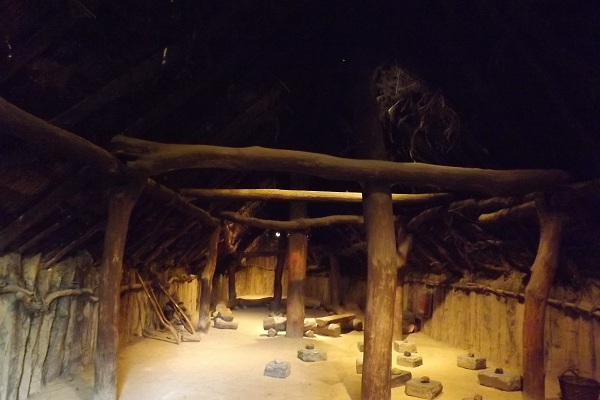 The Neolithic house, interior
The trapezoid shaped long house is part of the so-called Rössen Culture (4300 - 3500 BC) and modeled after finds at the Rhine. The culture spread over a large area in Middle Europe. The pillar beams are a bit thicker than archaelogical finds prove, thanks to modern safety laws.They lit actual hearth fires there on occasion, so a smokey smell was in the air. 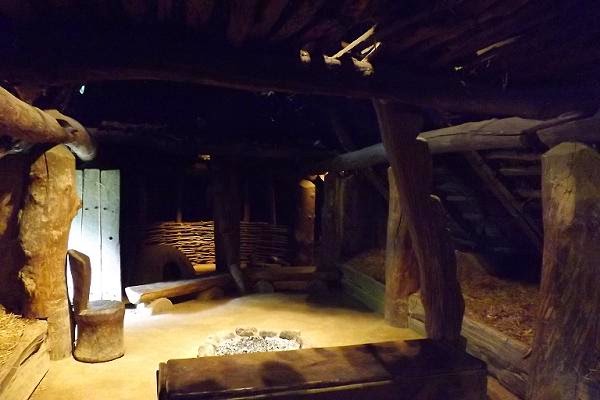 Bronze Age long house, interior
We're getting a bit more stylish in the interior of a Bronze Age long house. There are even sleeping bunks and a ladder leading to the storage floor above. It is a house with the living/sleeping quarters for humans on one side and shelter for the cattle on the other; separated by an entrance room. 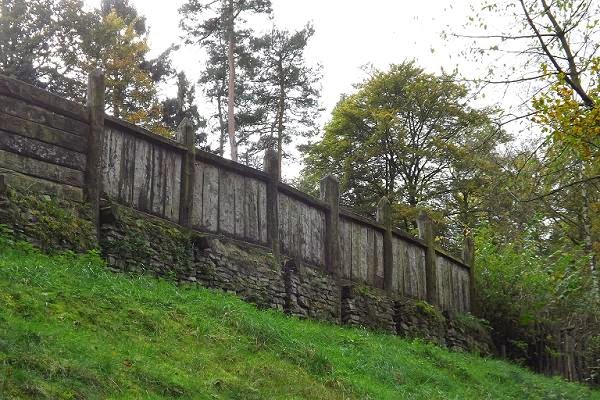 A post slot wall, 3rd century BC
The above photo shows the reconstruction of a Celtic post slot wall (Pfostenschlitzmauer), a variant of the murus gallicus Caesar describes, dating to the 3rd century BC, though it was in use at least until the time of the Gallic wars. The structure is a three-dimensional timber framework filled with stone and earth. Remains of the original have been found on a hill near Oerlinghausen. 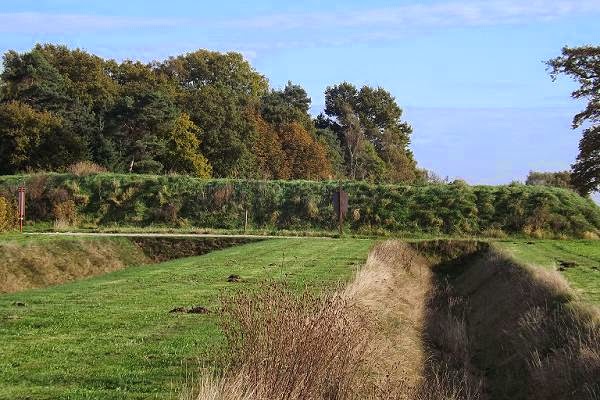 Roman camp Anreppen, reconstructed double trench
We got Romans, too. *grin* The camp of Anreppen-Delbrück is part of the line of semi-permanent forts along the Lippe used during the campaigns of Drusus (16-9 BC) and probably also Varus (AD 6-9) in Germania. Anreppen may have been the wintering camp; it could hold an entire legion, and at least the officers had half-timbered houses. The layout follows the structure of more permanent forts. 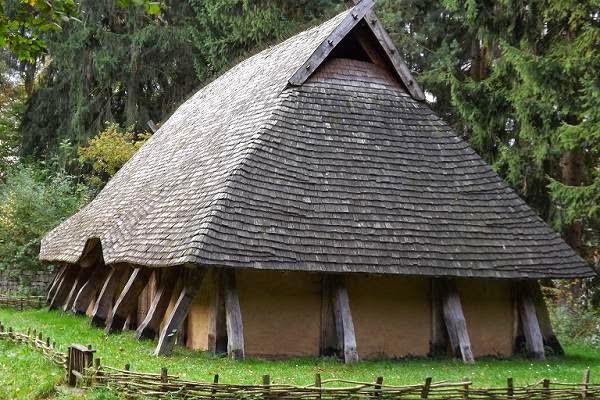 7th century Saxon long house, Oerlinghausen
This 7th century Saxon house is supported by exterior beams and thus doesn't need any pillars in the inside, making room for a spacious hall. It follows a pattern often found in Westphalia. The house is accompagnied by a reconstructed pit house and a smithy, forming a 'Saxon village'.
Read more! ¶ October 31, 2014 6 comments

More Castles for the Collection
The weather on our Paderborn and Surroundings tour was unfortunately not very cooperative; overcast sky at best, often with mist, drizzle or downright rain. So you'll get some autumn photos that'll make you want to sit inside with a nice hot tea. 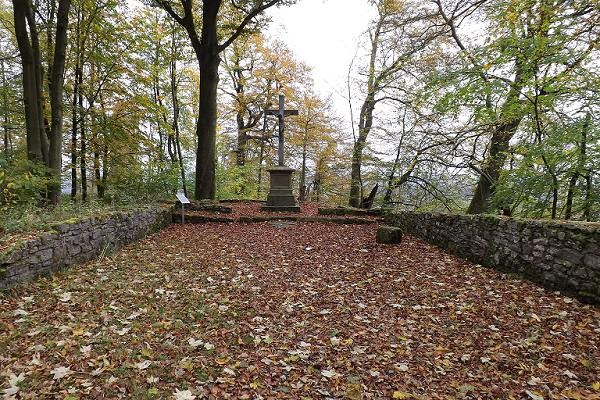 Iburg (Bad Driburg), remains of the chapel
Not much remains of the Iburg today, but there was a Saxon hillfort already in the 8th century, which Charlemagne conquered. He had a chapel built there and gifted the place to the bishop of Paderborn. In 1189, bishop Bernhard II built a castle around the chapel (which he expanded), using some of the old wall and trench structures. The castle was destroyed by Otto of Braunschweig in 1444. 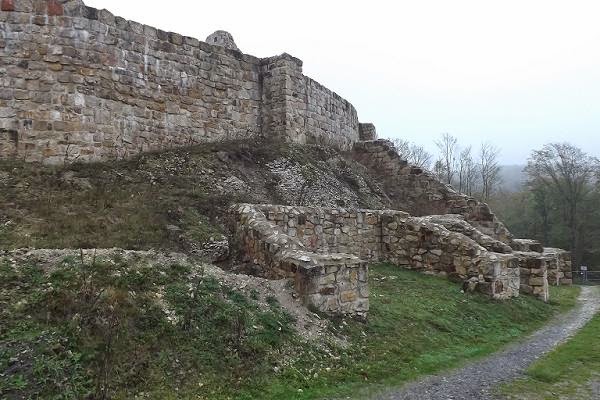 Falkenburg, inner curtain wall seen from the outer bailey
The Falkenburg was built by Bernhard II of Lippe in 1194 and would remain their main seat and centre of their power until the mid-15th century. The castle withstood several sieges, until it was severely damaged in 1453 due to a fire accident. The castle was abandoned soon thereafter and used as quarry. Its history ties in with some of my other posts, like the one about Castle Polle. 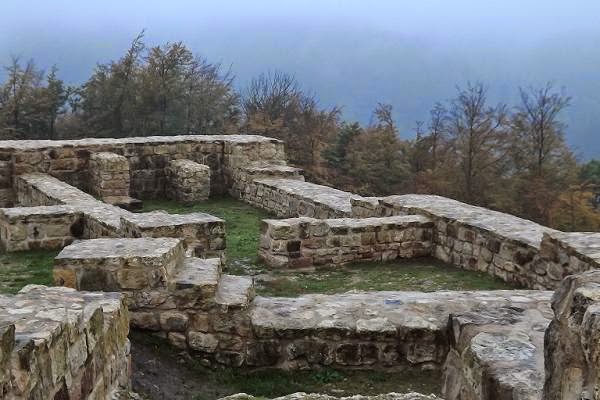 Falkenburg, buildings in the inner bailey
The Falkenburg is closed to the public because of extensive archaeological and reconstruction work going on since 2004. But since we already had climbed the damn hill - in the rain to boot - my father decided to ignore the verboten signs and we managed a way through the fences to get some photos. In the end, we had a lot of fun despite the rain, feeling like naughty children. And we even got supper later. *grin* 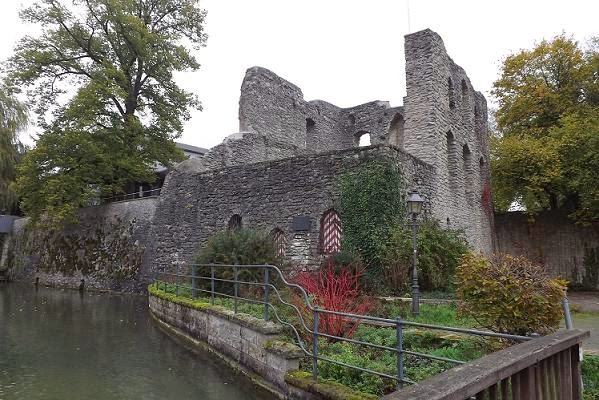 Castle Lippspringe with the Lippe springs
The moated castle Lippspringe was first mentioned in 1312 as in possession of the Cathedral Chapter of Paderborn. It was refortified in 1482, but badly damaged during the Thiry Years War. Today, only the walls of one house and some curtain walls remain; a conference centre has been built into the remains, merging ruins with modern architecture. 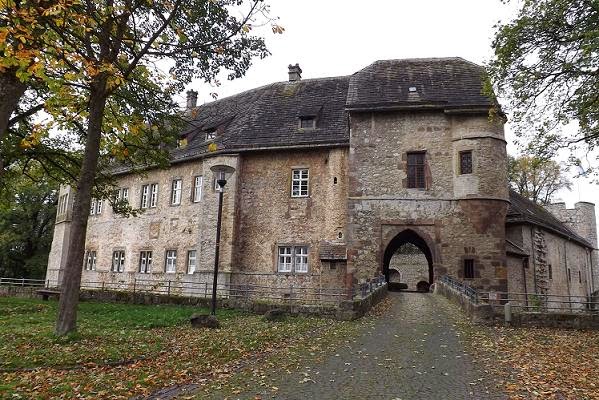 Castle Dringenberg, main gate
Bernhard V of Lippe bought the county of Dringen from the counts of Everstein in 1316 and had a castle built on the mountain spur. It was expanded in the 15th century; the gatehouse and the tower were added in 1488. The castle was destroyed during the Thirty Years War but rebuilt by Prince Bishop Adolph of Paderborn. It served as summer residence of the bishops of Paderborn until the 19th century. Dringenberg shows a mix of Renaissance and recontructed older elements. 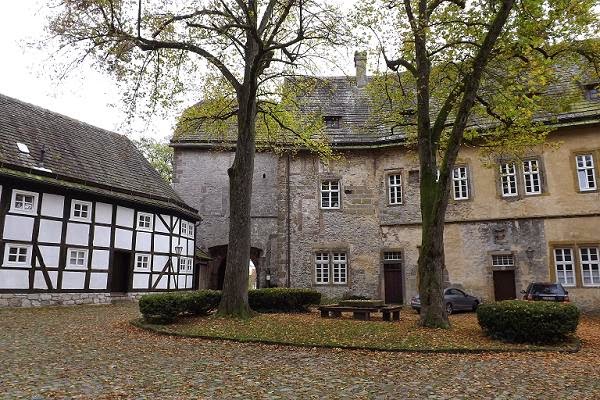 Castle Dringenberg, inner courtyard
There is a charming museum in several rooms of the castle these days, showing old furniture, an old store, things like mechanical writing machines, and geological finds. Also worth a visit are the vaulted cellars, the oldest remaining part of the castle. 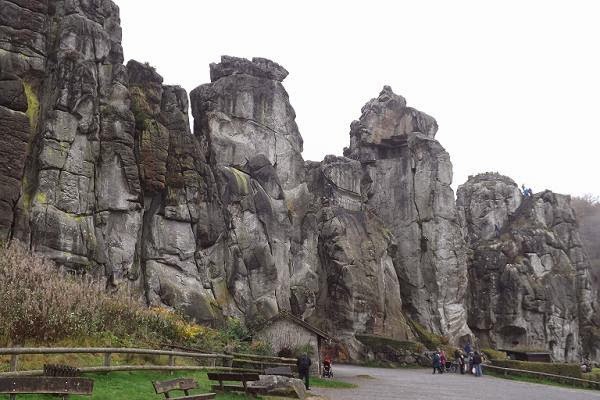 The famous Externsteine formation
The Externsteine formation is not a castle, of course, but it fits best in this post. The sandstone outcropping is several hundred metres long and 37,5 metres (123 ft.) at its highest point. The rocks have been altered by humans over time; caves were hewn out, and at one place a beautiful Medieaval relief has been carved into the surface. 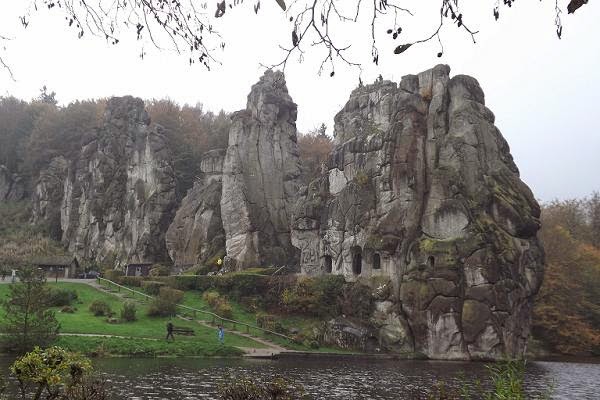 Another view of the Externsteine in the rain
We don't know for sure if the Externsteine played a role in the religious life of the Germanic tribes in pre-Christian times, but the caves were used a chapel in the Middle Ages. Later, a count of Lippe erected a platform on one of the peaks and used some of the pillars as part of a curtain wall of a small castle, but those structures - except for the platform and staircase - no longer exist. Since the rocks were wet and the view clouded, I didn't climb them.