27 Apr 2016
Spring in the Meissner Mountains
I've posted some photos of the Meissner mountains taken in autumn some time ago. Here is a bunch I took two weeks ago, with the first buds of spring appearing on the trees. 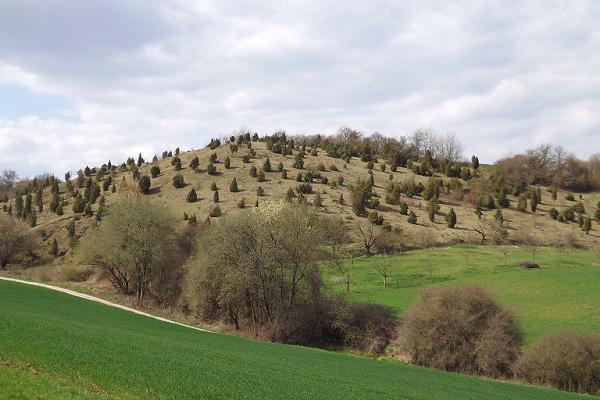 Meissner mountains, juniper heath near Rossbach
I'm still having a busy time at work. I hope it will be better soon so I'll have the time to write some longer posts that require research. It's not that I'm running out of landscape photos, but I suspect my readers will get bored if there's not some castle soon. ;-) 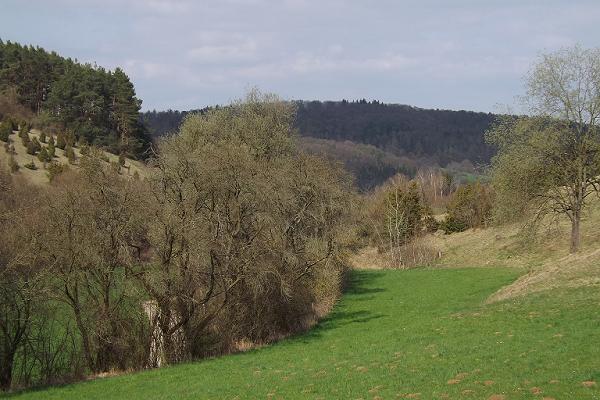 A view into the valley
The scenery for this post was taken on the juniper heath near a village called Rossbach in the Meissner foothills. One of the Premium hiking paths is leading through this landscape. The Premiums hiking ways are mostly natural paths that are kept free from obstacles and well equipped with signposts. There are also maps so you can plan tours ahead. 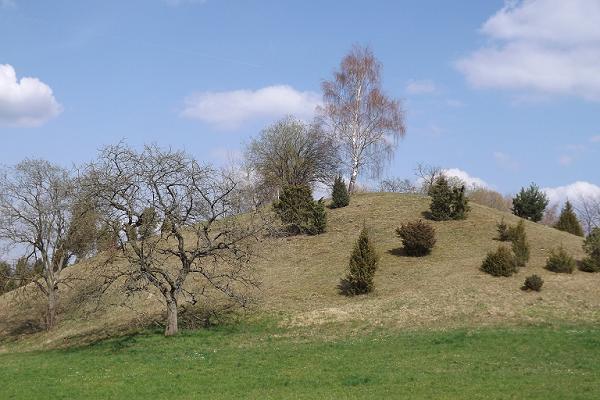 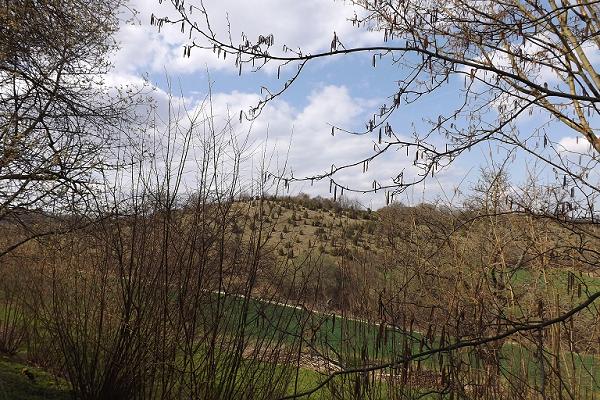 Another - slightly obscured - view into the valley
There is some forest as well, and a river that gets lost. *grin* Since the rock ground in that area is limestone and gypsum kalk, the brook seeps into some particularly porous bit of ground. That itself is not so unusual in limestone formations, but the brook doesn't reappear anywhere - like for example the Rhume Springs - and that is unusual. 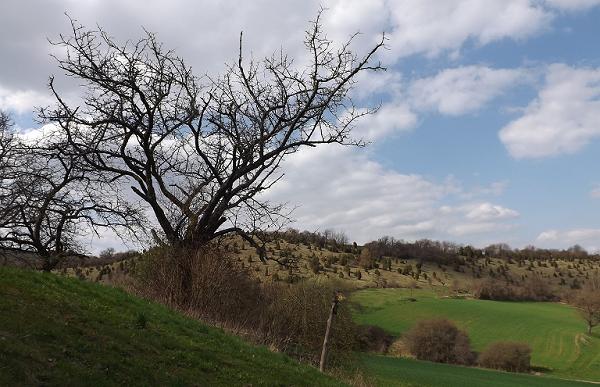 A gnarled tree
The limestone dates back to the zechstein time when this part of Germany had been a shallow sea that stretched from eastern England to northern Poland, an area that was known as the European Permian Basin - back then located near the equator. That was 298-252 million years ago. The zechstein is a sedimentary rock as result of layers of calcareous marine fauna pressed together. 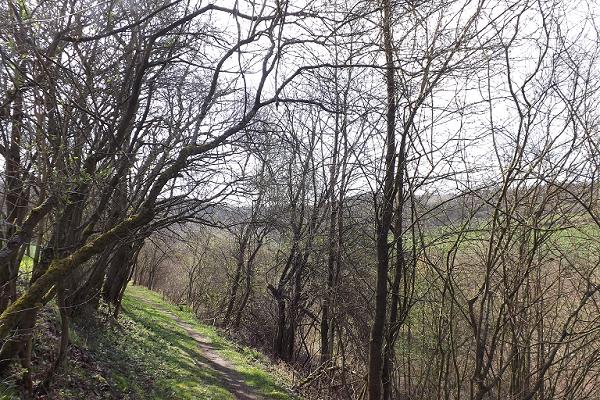 A shrubbery dividing some fields
The Zechstein Sea was also responsible for the vast layers of halite (rock salt) that can be found in Germany and Poland. The salt domes around Lüneburg which played a role in the rise of the Hanseatic League in the Middle Ages belong to that strata. Salt can also be found at Werra and Leine where it comes close to the surface in some places. 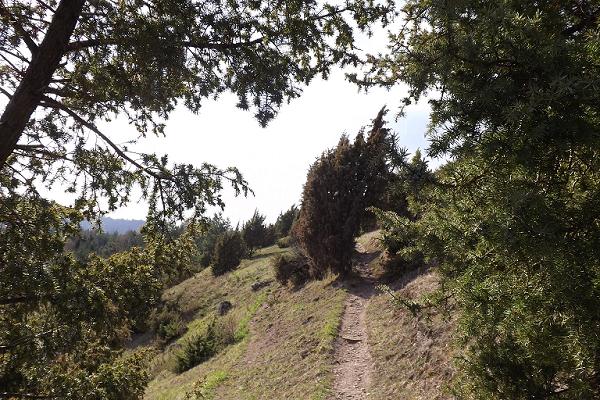 More juniper heath on the other side of the village
The grassland parts of the landscape are kept open by sheep who are herded to grazing regularly. The area is an interesting mix of natural habitats and man made parts like fields and cherry orchards (the whole area is famous for its cherries). The landscape has developed that way for hundreds of years and is now a nature reserve despite its partial agricultural use. 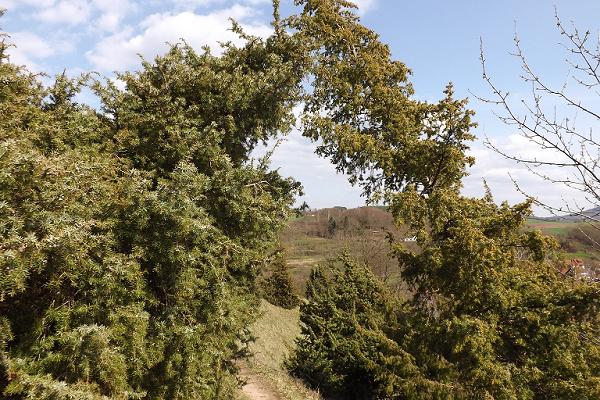 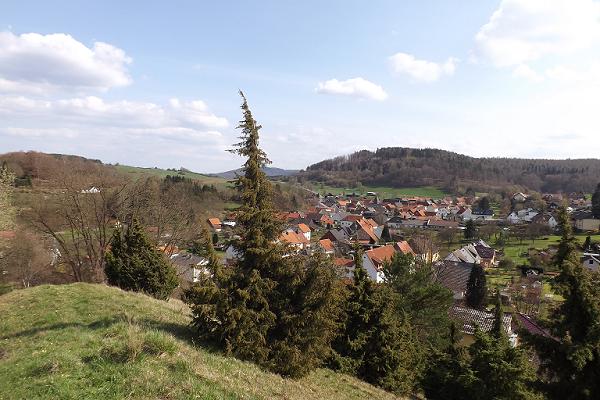 11 Apr 2016
Spring Impressions from the Danube
Life is a bit busy right now so here's another short picture post with spring photos, this time from the Danube. 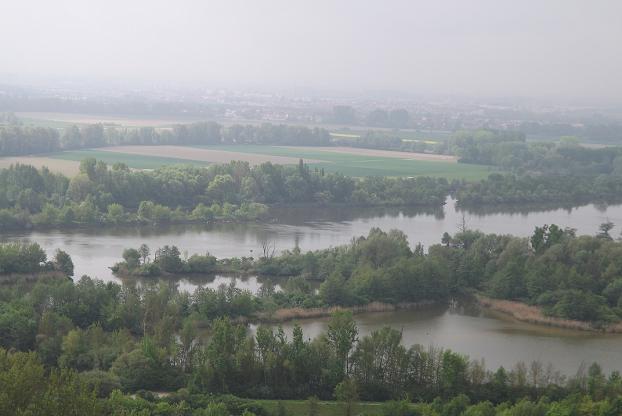 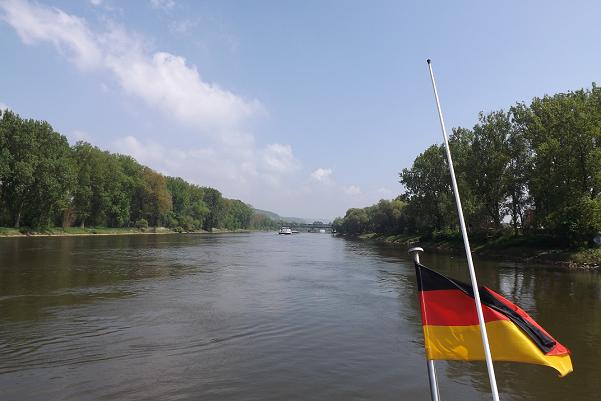 Shores of the Danube near Regensburg
I took a two hours mini cruise on the Danube to rest my feet after walking on cobblestones for hours. I love those little boat trips. 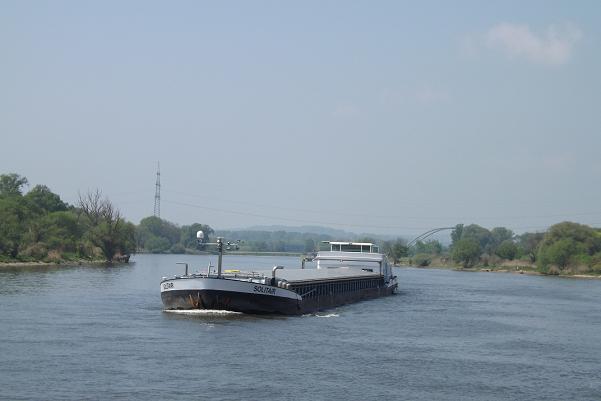 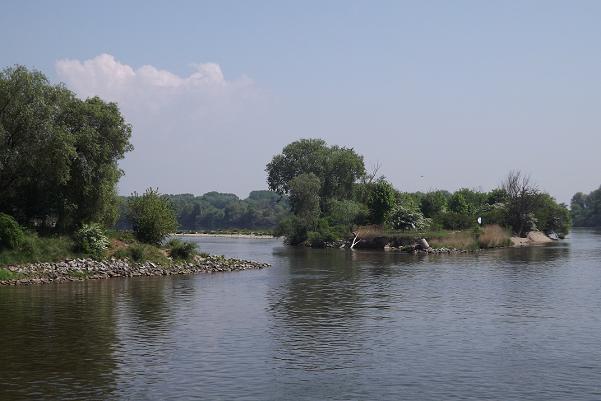 A side arm of the river
Sometimes the river branches off, either to form a peninsula, a bayou, or an abandoned meander, though the latter often have been filled in to make the river easier to navigate. 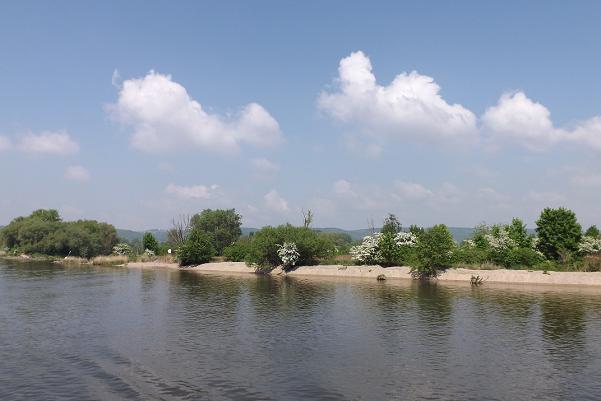 Spring blossoms
Spring was well on its way in early May. 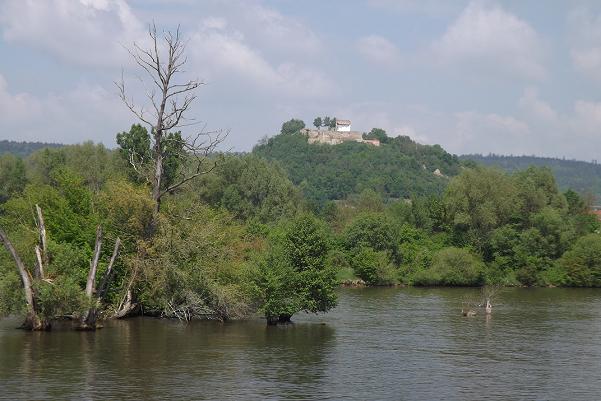 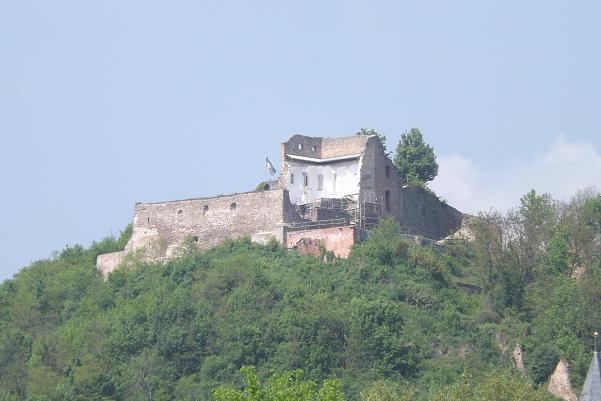 Closeup of castle Donaustauf
And a closeup of the castle with the remaining interior of the chapel painted in white. 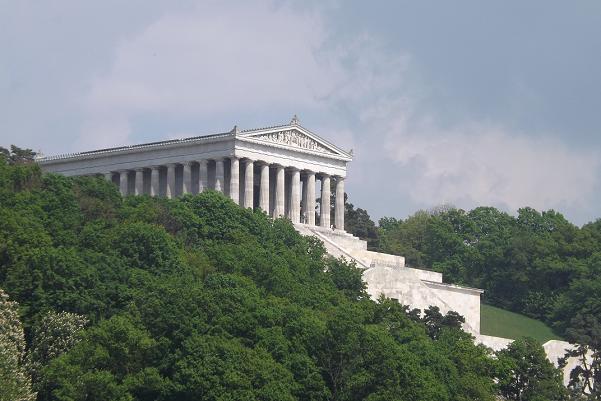 The Walhalla
The Walhalla. No, not the Norse warrior heaven, though it's named after it. King Ludwig I of Bavaria (the grandfather of 'Mad King' Ludwig) built it in 1842 to commemorate important people of German culture and history. They a represented inside the Greek style temple by busts and tablets. 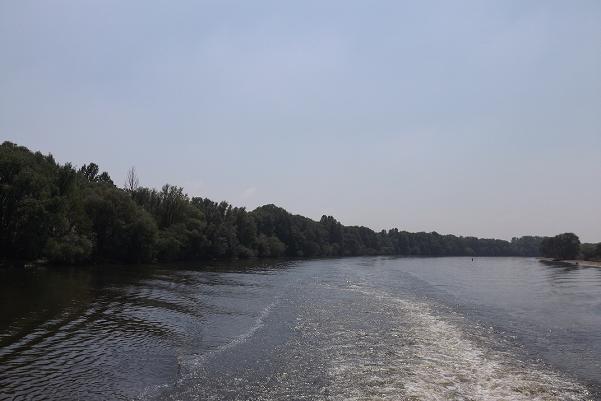 Against the sun
A nice view against the afternoon sun on the way back to Regensburg. 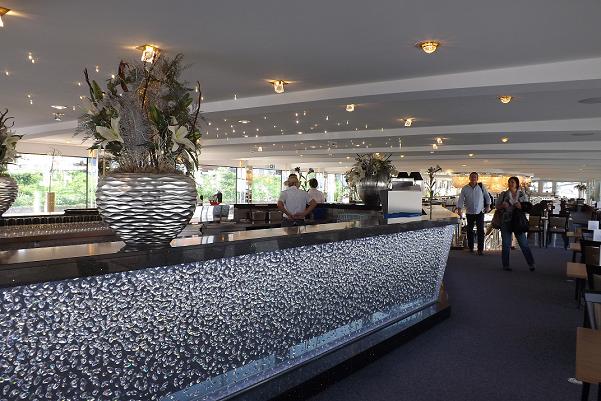 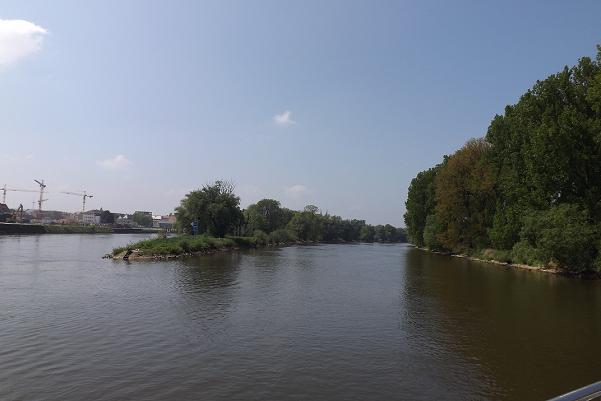 Upriver towards Regensburg
Returning to Regensburg. Part of the town's Danube harbour can be spotted to the left. 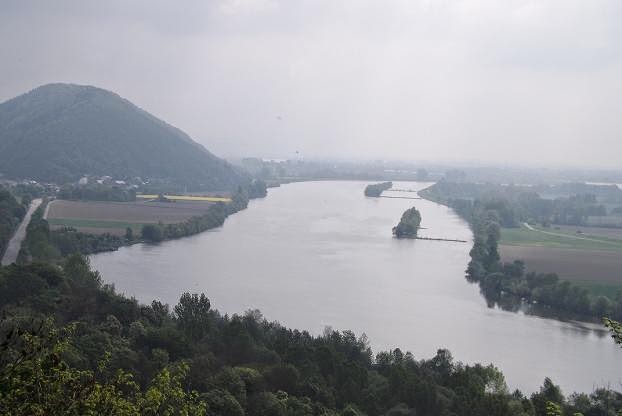