29 May 2016
Unifinshed Perfection - The Architecture of Beaumaris Castle
When work on Beaumaris Castle was finally abandoned in 1330, the curtain walls had been completed and all towers raised to battlement level at least. The inner towers were supposed to have an additional storey and should have been crowned by turrets the way you can see in Caernarfon and Conwy, but that was never done. The harbour was dug out as well as part of the moat. The southern barbican had been completed (but not the gate house). The northern gate house was completed to the first floor, and some of the interior buildings, including the chapel, may have been finished, too, though little remains of them today. 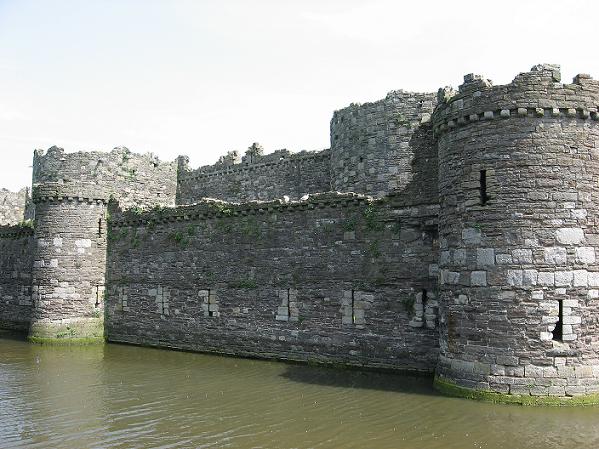 Beaumaris Castle, both curtain walls seen from the moat

But when William de Emeldon, chancellor of the exchequer of Ireland surveyed several Welsh castles after Edward the Black Prince was invested as Prince of Wales in 1343, things didn't look too good in Beaumaris. The chamber above the sea gate was dilapidated, roofs were lacking in several towers and the chambers below therefore ruinous, the chapel tower needed to be completed, the kitchen was unuseable, parts of the battlement had fallen down, and the southern gate house was in bad repair; the twin towers flanking the northern gate house needed their staircases to be completed. William estimated the most important repairs to cost £ 685. We don't know if any of the suggested repairs had been undertaken. 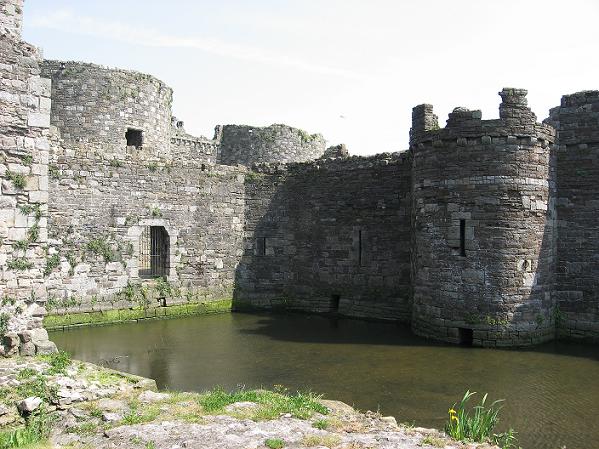 Remains of the harbour
Minor repairs went on, and the castle was garrisoned in 1389 (towards the end of the second phase of the Hundred Years War) and again in 1403 during the rebellion of Owain Glyn Dŵr. But no substantial renovation was done, and and the castle constable Roland de Velville reported that there was scarcely a chamber in Beaumaris where a man could lie dry in 1534. Five years later, the new constable, Richard Bulkeley, wrote to Thomas Cromwell, secretary to Henry VIII, that Beaumaris was "ruynous and ferre in decay", and badly equipped with arms to boot. Since relations between England and Scotland - ruled by the Catholic James V - were more than a bit unruly at the time, Henry VIII feared a Scottish invasion via Wales. Bulkeley bought gunpowder, bows and arrows, sallet helmets and brigandines for the garrison at his own costs. 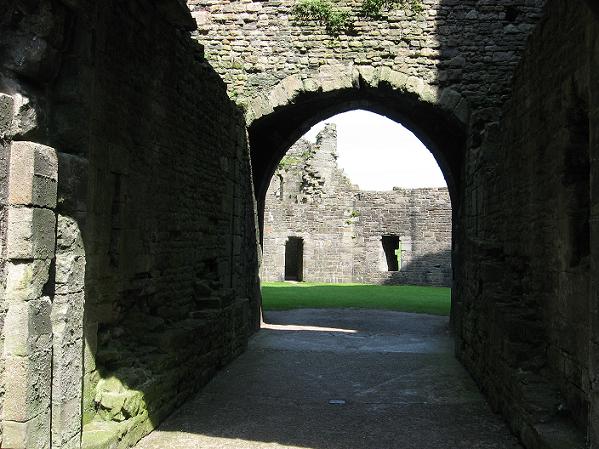 View through the south gate
In 1609, the castle was "utterlie decayed". Later, another of those poor Bulkeleys who got stuck with Beaumaris, Viscount Thomas, paid £ 3,000 out of his pocket to repair the castle in service of King Charles I (see also the first post) in 1642. During the time the castle was held by Cromwell's men under Colonel John Jones after its surrender, two men of the garrison were imprisoned for "stealing ye leads of ye castle".

Lead was expensive. The lead roofs were officially dismantled in Beaumaris and Conwy in during the Restoration in 1660. What existed in the way of inner buildings was taken down in during time as well (the stones were probably used ot build Beaumaris Gaol in 1829); the rest got grown over by ivy. 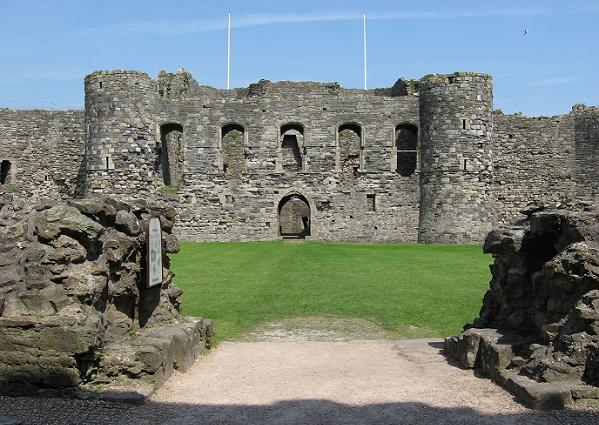 View towards the north gate
The 19th century saw a rise in interest for picturesque ruins, and ivy-clad Beaumaris with its formidable towers attracted the first tourists. It was the location for a 'Royal Eistedfodd', a meeting of poets and singers, in 1832. Among the visitors were Victoria duchess of Kent and her daughter Princess Victoria - the future queen.

The Bulkeley family was connected with Beaumaris Castle since 1440 and held the office as constables without interruption since the Civil War. The sixth Lord Bulkeley bought the ruins from the Crown in 1807, but his successor Sir Richard Williams-Bulkeley gave the castle to the Commissoners of Works in 1925. Repairing those dang roofs turned out to be too expensive. *wink* 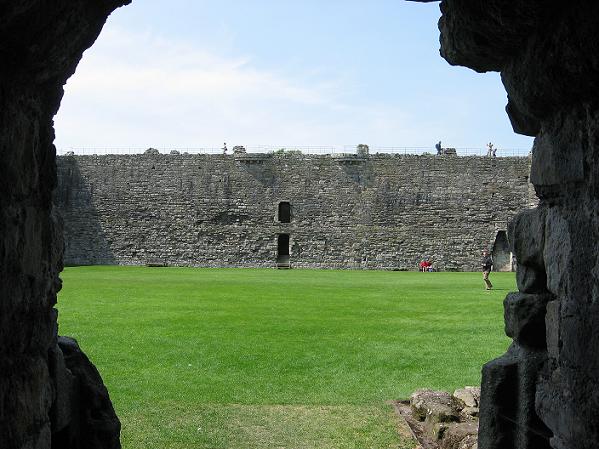 View into the inner bailey
The Commissioners of Works got rid of the pretty but ultimately wall damaging ivy and carried out repairs and restoration neccesary to prevent further decline. They also dug out part of the moat which had filled with silt and refilled it with water - half of the castle is thus surrounded by it again. Makes for some really nice photos. :-)

Beaumaris was declared part of the Castles and Town Walls of King Edward in Gwynedd World Heritage site in 1986. Beaumaris Castle is today managed by Cadw, the Welsh Assembly Government's agency for historic monuments. 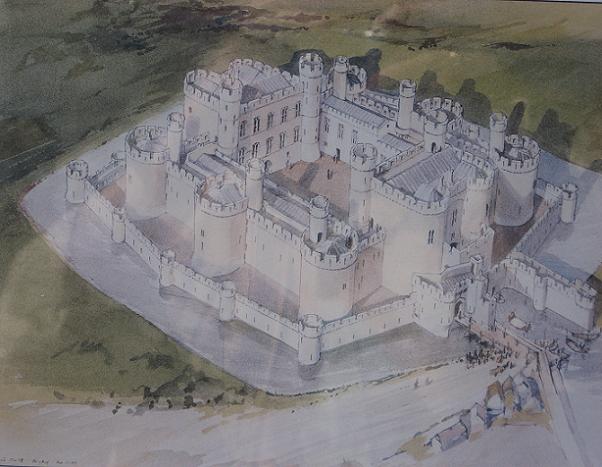 A model of the castle
The drawing above shows Beaumaris Castle as it should have looked when finished. You can see the almost perfect symmetry of the double curtain walls with their towers set up in regular intervals, and the double D-shaped south gate and north gate. The only feature that stands out is the sea gate (left of the south gate). The walls and towers, as well as the gates, remain today, albeit some of them are lacking their upper storeys. The buildings in the inner bailey have mostly disappeared except for some foundations, as did the part of the south gatehouse that should have housed living quarters - the north gatehouse is in better shape (though lacking the second floor). All wooden structures, including the floors, decayed long ago. 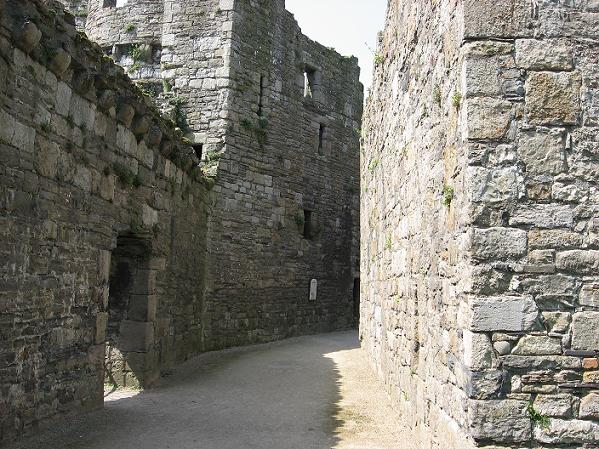 The passage between sea gate and barbican
The material used are limestone (a smooth grey variant and a more common brown laminated stone), grey sandstone and green schists, all quarried locally on Anglesey. The distribution of the various stones in the wall is random, contrary to Caernarfon where the horizontal lines of red sandstone are clearly set to form decorative bands. The praecambrian green schist has only been used during the first building phase until 1298 and can be found in the walls up to 20 feet heigth. None of the stones are suitable for intricate carvings, which adds to the sturdy impression of Beaumaris - no fancy archs and elaborate window transoms. 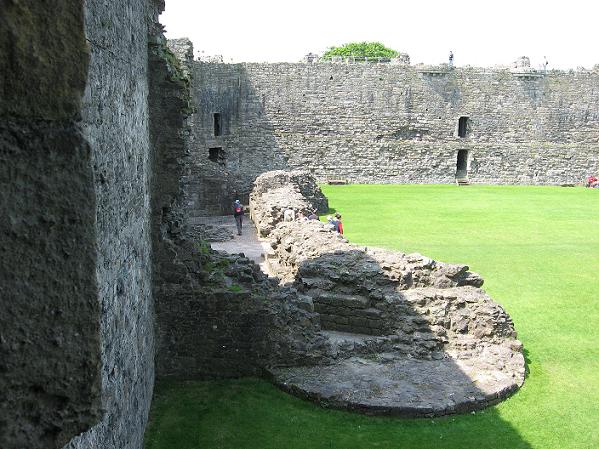 Remains of the south gatehouse with the foundations of the staircase turrets
It was not easy to get into the castle if you couldn't provide an inviation letter. :-) The way through the sea gate, barbican and south gate involved a drawbrige and a series of no less than fifteen doors or portcullises. And in between those were murder holes and arrow slits through which all sort of upleasant things could be thrown or shot.

The D-shaped double towers of the south gate are but lacking their upper storey, but the building attached to it that would have faced the inner bailey has never progressed even to the level of the - also unfinished - northern gatehouse. The staircase turrets exist only in foundations, and the first storey apparently was never roofed in when work ceased in 1330. No wonder that the biggest post of repair costs on William de Emeldon's list was the southern gatehouse. 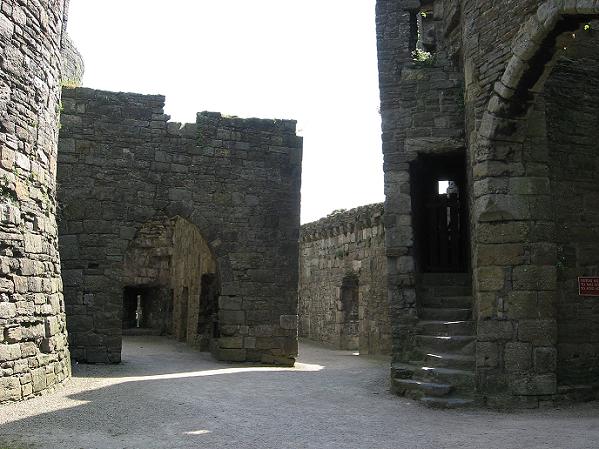 Remains of the barbican adjacent to the south gatehouse
Beaumaris was not only a formidable defense structure but also designed as royal residence, either for Edward I and maybe a future queen (his wife Eleanor of Castile had died in 1290), or his son Edward II, the Prince of Wales - who might have liked to help with the thatching of those roofs and digging out the moat - and his household But King Edward I visited the castle but once, in July 1296. Some temporary wooden housing had been set up for the king then; since the main work concentrated on the defense structures. I don't know if Edward II ever stayed at Beaumaris, maybe Kathryn can enlighten me. 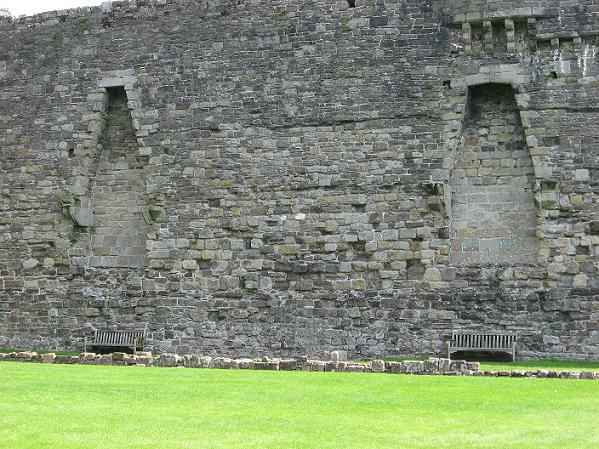 Fireplaces in the inner wall
The gate houses were clearly intended to be grand structures with large inward facing windows and halls and chambers befitting a king. Several of the buildings along the inner curtain wall may have been completed and later fallen into decay. Some fireplaces and door frames can still be seen, as well as holes in the wall to support floor beams, and bits of wall plaster.

Besides the royal appartments, a great hall, and the kitchen, there would also have been lodgings for the constable and his household and maybe the local sheriff as well (if he didn't reside in Llanfaer), and those must have been habitable at the time when the castle was garrisoned 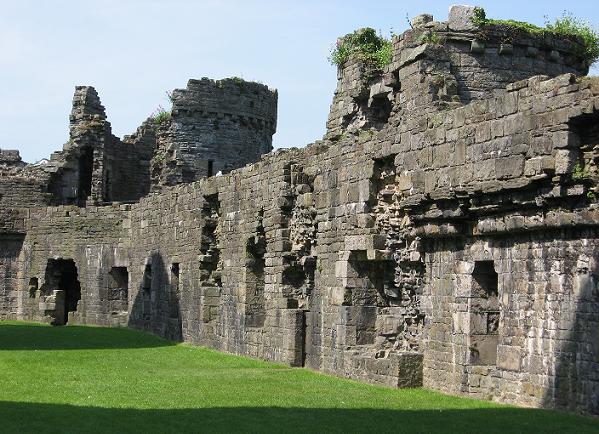 Remains of buildings along the inner curtain wall
The garrison would likely have lived in the towers of the inner curtain wall where several chambers were habitable during the time the castle was used, though originally barracks may have been planned, perhaps even in the outer ward. Some arched lintels that once supported a floor can still be seen. The towers were intended to be three storeys high, but the uppermost one was never finished. The tower halfway along the eastern inner curtain wall houses a little chapel that has been restored, but it was closed when I visited the place. 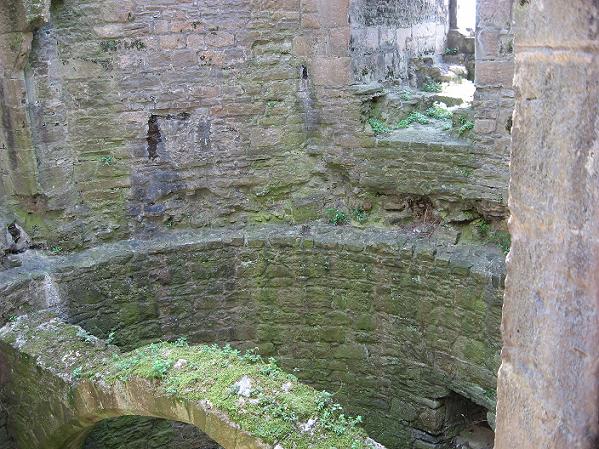 The interior of the north-east inner tower seen from an upper storey
I posted a photo of the inner passageways in my first post about Beaumaris. They would have run through the entire inner curtain walls at first floor level, and a significant part of them is still intact. Those passageways connected the various buildings and towers with their guardrooms, sleeping chambers and other rooms along the wall, and also held a set of 16 latrines which emptied into the moat by a system of drains. Yuck. The drains already needed mending in 1306.

Those passageways also still exist in Caernarfon and in Pembroke. The ones in Pembroke Castle are much lower than those in the Edwardian castles in northern Wales. He got his nickname 'Longshanks' for a reason. 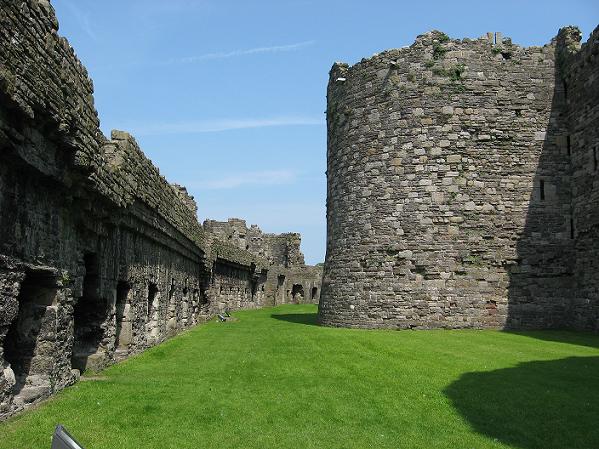 The outer ward, with the outer curtain wall and the remains of battlements to the left
While the inner bailey was the place for accomodation, the outer ward was a defense structure. You didn't want to get caught between both sets of curtain walls and the twelve outer and six inner towers plus the inner gate towers. Arrowslits would allow a defense against outside besiegers, though some of them have been blocked, probably during the Civil War (when bows were mostly replaced by guns). The corbelled tables that supported the wooden battlements are still intact in part, though the upper crennellations are mostly gone. 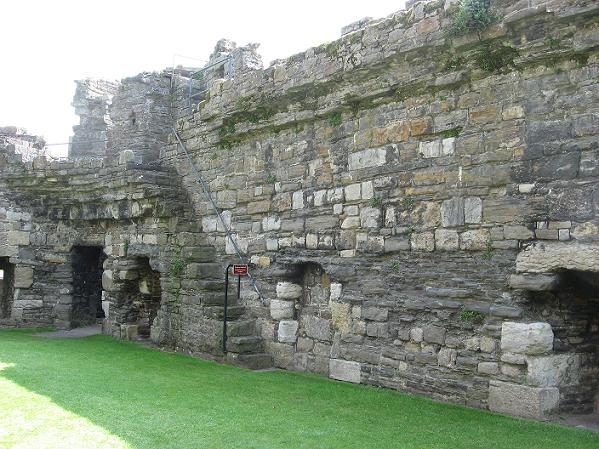 Stairs leading to the battlements of the outer wall
Like the sea gate next to the southern gatehouse, there was another gate next to the northern gatehouse, the Llanfaes Gate. It was used during the time when the north gate had been blocked because its doors and portcullises were not yet working (they never did, it seems), but the Llanfaes Gate remained unfinished as well; their towers never got the outward looking D-shape outlined in the foundations. Today, the moat ends at Llanfaes Gate. 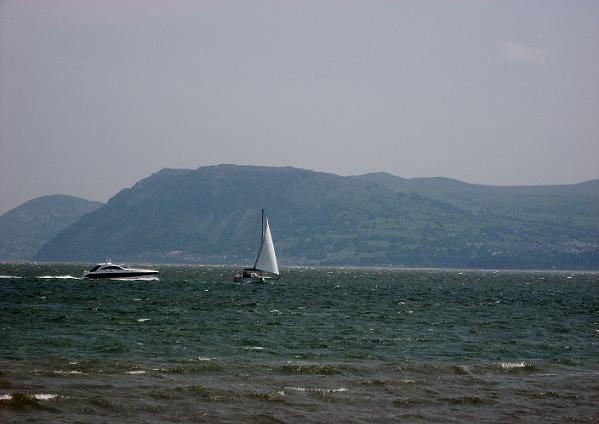 View from Beaumaris Castle across Conwy Bay to the mainland

Comments:
Great photos- and a very detailed report on the strengths of Beaumaris.

I love these formidable walls. Magnificent :)

Thank you, Anerje and Kasia.