15 Jan 2017
Revisiting the Weidelsburg
I've mentioned that we revisited Weidelsburg Castle in my 2016 summer travel post. I wanted to take photos of the place after the restoration work going on in 2008 was finished (1). Here is a bunch of them. 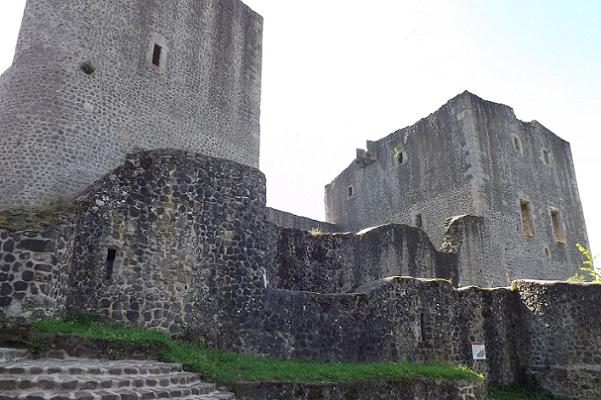 I've posted about the history of the Weidelsburg here and the architecture here, so this post will be mostly photos, esp. of the parts that had been scaffolded in or were inaccessible in 2008. 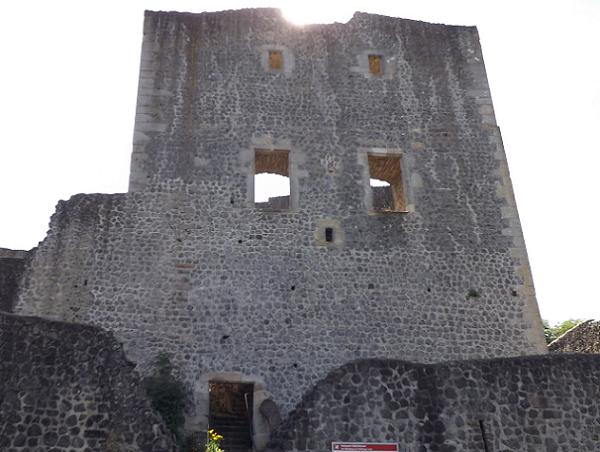 The palas seen from the north
I've changed two or three photos in the old posts and added one to make the posts look better, but overall I want to keep the new stuff to its own post. 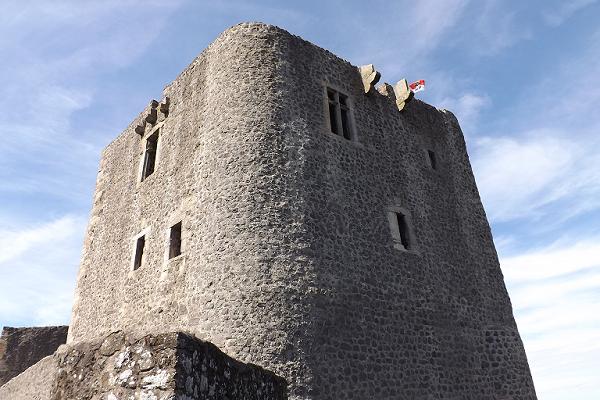 The east keep
I also got a new camera with a better wide-angle lens, therefore some shots of the castle are better now, like the above one of the east keep, or the outer bailey below. 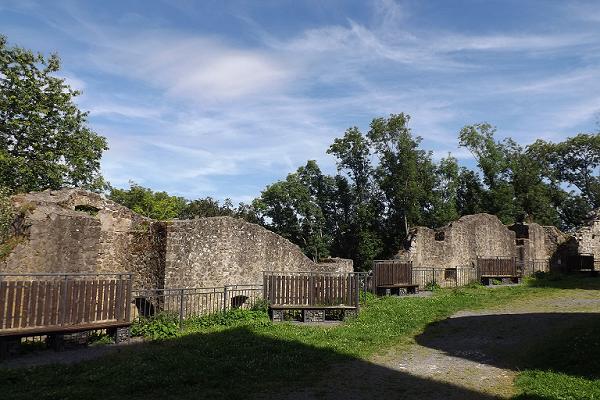 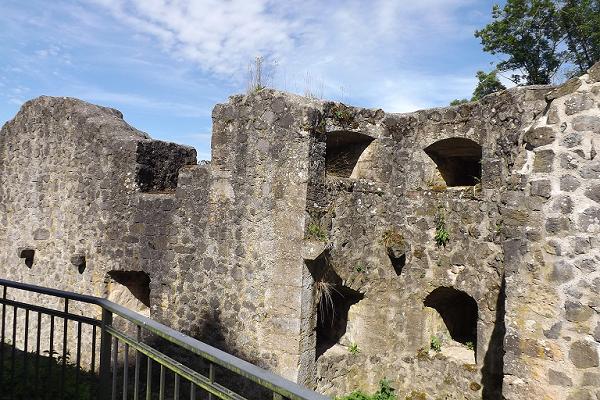 Closeup of the northern curtain wall
Besides the restoration work, the Friend's Association (2) in care of the castle has added some features to better explain the Mediaval look of the place. One of those is the portcullis at the entrance to the keep as additonal defense. Even with the castle taken, the keep could have held out, especially since it had its own well. 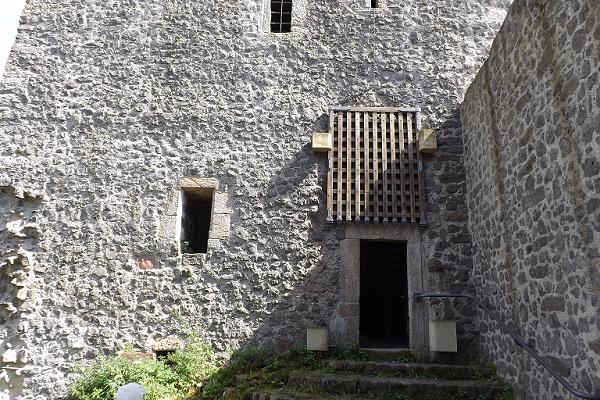 Entrance to the east keep with portcullis
It was a sunny and warm summer day; nice weather for a little hiking tour, but the sun glared off the freshly sandblased walls and created deep shadows on the other side, which made photographing a bit tricky. 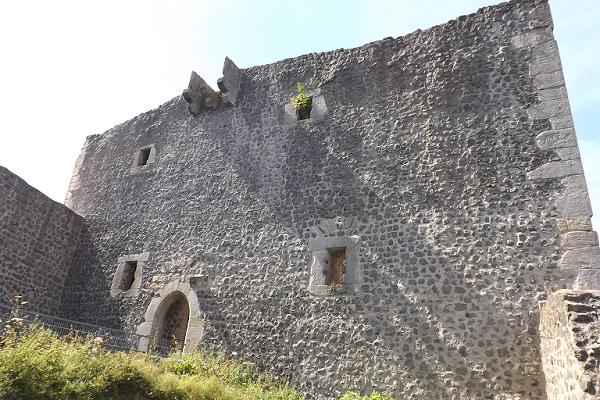 The palas seen from the east
The most outstanding change to my first visit was the west palas - the great hall - which has been sandblasted and stabilised in 2008. Only the outer walls still exist, but those give a good impression of the size of the building. 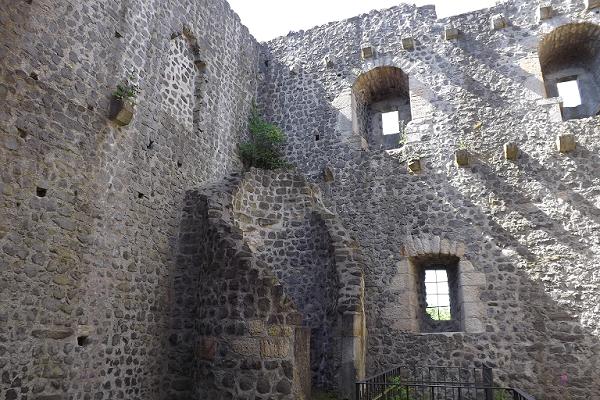 Interior of the palas: staircase in the south corner
The palas has three storeys. One can still see the supports for the floor beams in the wall. A staircase towerlet led to the upper storeys. 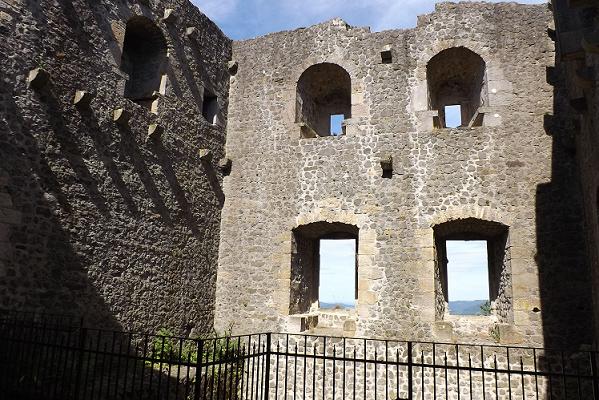 Another interior shot of the palas
The ground floor was separated into a great hall and an anteroom which may have been used for household works or as the lord's office. The hall had several large crossbar windows with embrasures and benches. 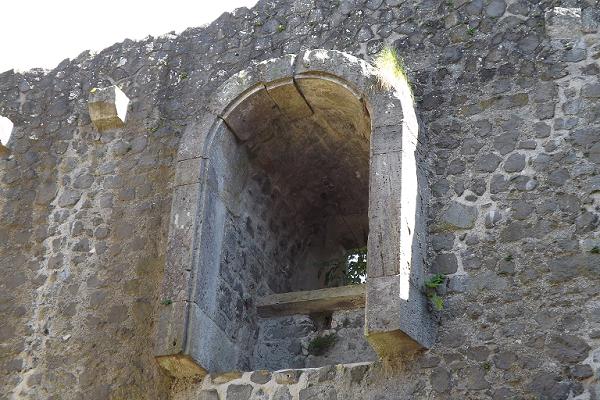 Toilet oriel in the palas
One of the toilets remains, now high up in the air (with an outflow into the outer trench), but originally situated in the third storey which may have held the lord's and lady's chambers (3). 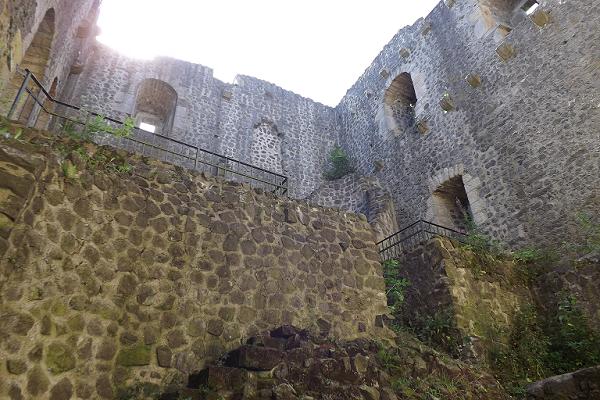 Great hall seen from the - now open - cellar
The cellar had two storeys. The upper one may have been used as kitchen. The other cellar was used for storage. The vault has been restored, but the second cellar is not open to the public. 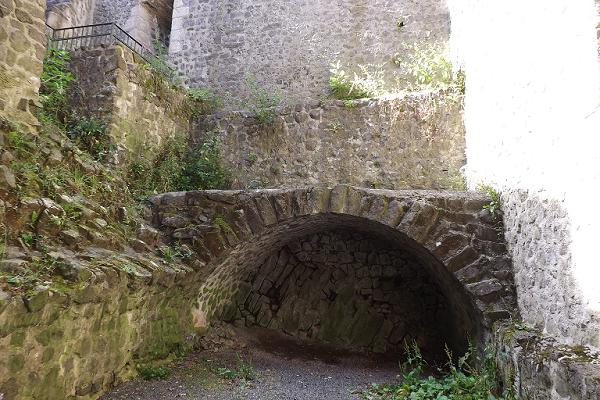 Vault opening into another cellar
To give a better impression of what the castle would have looked like when it was still in use, a piece of the battlements has been reconstructed, albeit it is lacking a roof which would have protected the guards - and the powder of the arquebuses. 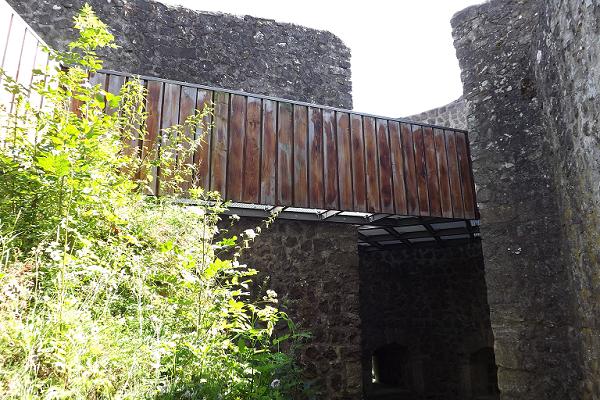 Reconstructed part of the battlements
As well as one of the many semi-circular half towers in the curtain walls. Those would have had several storeys separated by wooden floors and allowed shooting at the enemy from various angles. 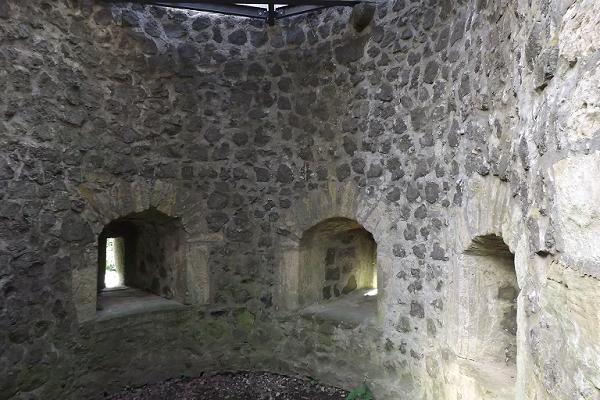 Interior of a half-tower, partly reconstructed
As mentioned in the post about the architecture of the Weidelsburg, the addition of zwingers put the defenses of the castle on the threshold between Mediaeval and Renaissance features. 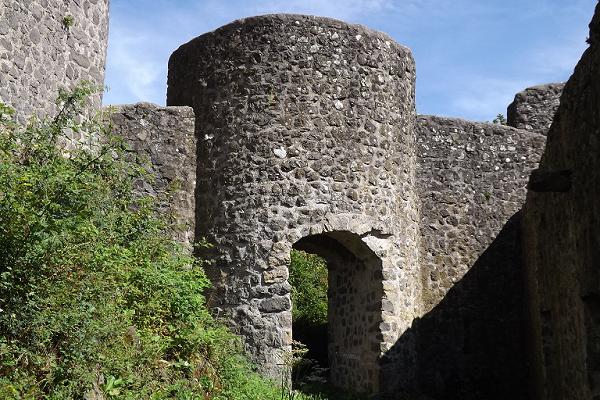 Gate tower leading into the east zwinger, seen from the zwinger
The south-eastern zwinger is the best preserved one, though at our first visit, it was overgrown with brambles and could only be glimpsed at through a door. Now it has been cleared out and the shrubs growing there are kept in check. 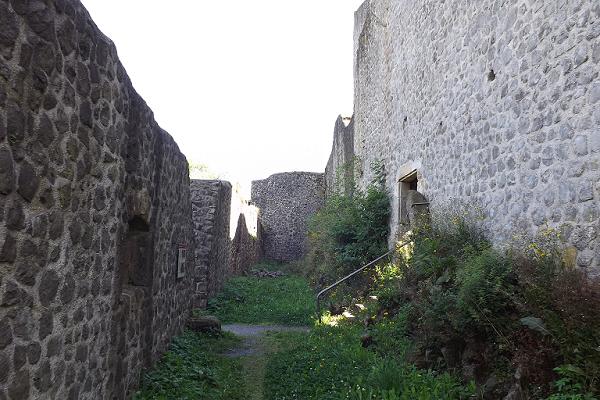 South-east zwinger
One can walk inside the zwinger and imagine how it may have felt to be stuck between two walls full of an angry castle garrison. But in our time it is a quiet and green spot if you can catch a moment without other tourists. 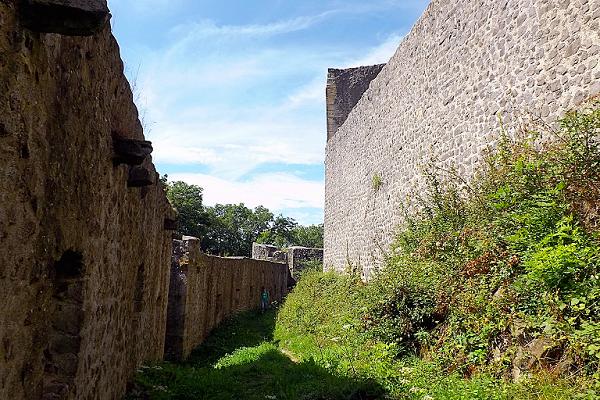 South-east zwinger, different angle
There is a little restoration snuck in between the keep and the eastern curtain wall. We had a glass of lemonade-beer mix callded Radler (it tastes better than it sounds) after the climb to the castle. 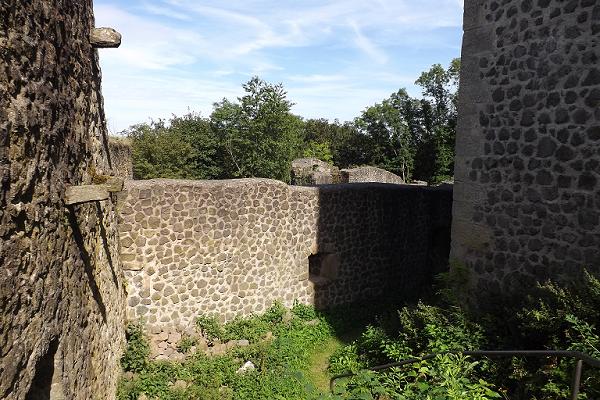 Southern part of the zwinger
Footnotes
1) It was finished in 2014. The County of Hessia gave about a million €, more money came in by private donations.
2) Link to their website, unfortunately only in German.
2) Today the toilets are in a timber barrack outside the curtain wall near the Naumburg Gate. Quite useful after all that cold lemonade-beer mix. :-)
Read more! ¶ January 15, 2017 3 comments

I wish everyone a happy New Year. 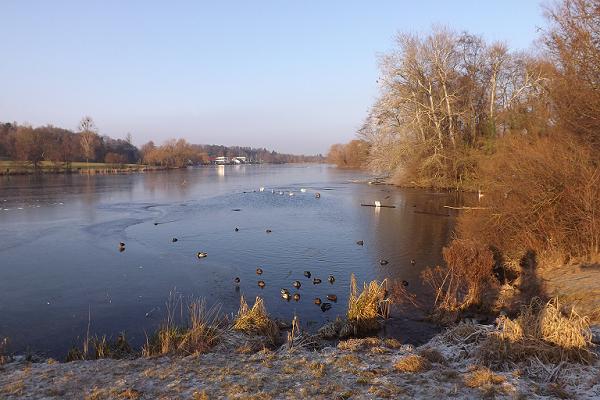 Kiessee Lake with ducks and swans
Here are some winter and water photos for you. :-)

The Kiessee Lake - a flooded gravel pit which had been in use until 1955 - is a recreational park not far from my flat, so I do a bit of walking there frequently. 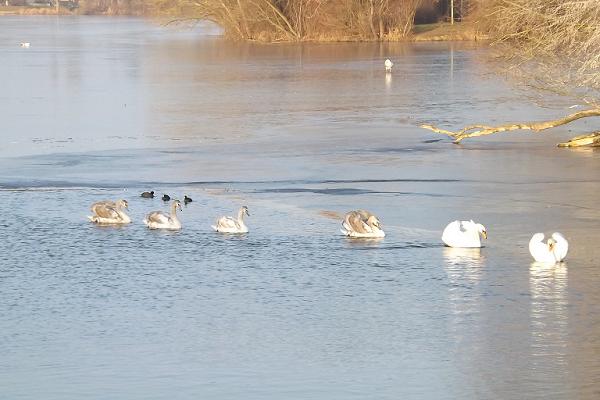 Closeup of the swan family
I brought my camera along today to get some winter photos from our New Year's walk I did together with my father. And a lovely sunny afternoon it was, too, albeit cold and rather windy. It didn't prevent a lot of other people walking along the lake as well, though I could photograph around them. 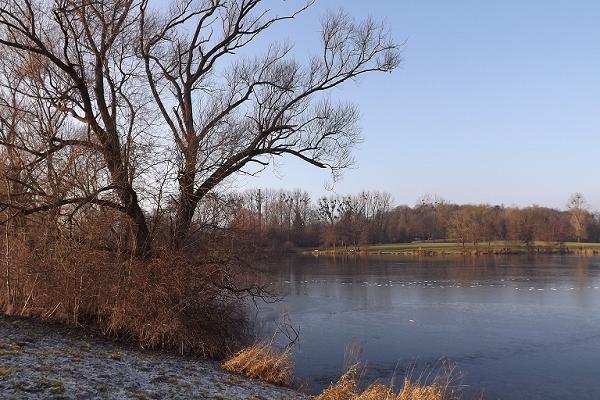 The lake from a different angle at the south shore
The temperature had been a bit below zero those last days and the lake starts to freeze over, though I would not recommend anything heavier than a swan to walk on that treacherous layer of thin ice. 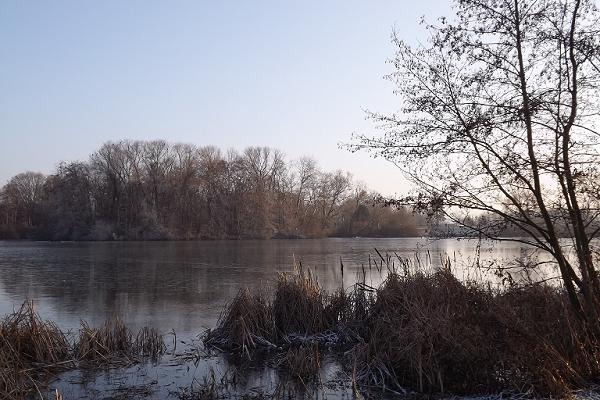 Seen from the west shore
There are rare winters when the ice is safe for skating. In summer, the lake often swarms with canoes and other small boats. There is a parking lot at the north side of the lake - just well my father can park his car near my flat since the parking lot is always full. 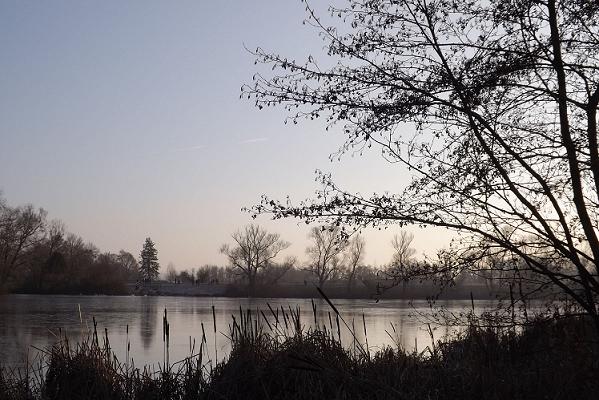 Reeds and the lake against the low winter sun
The surface of the lake is 15 ha and the shores about 2 miles, but there are additional ways in the surroundings, for example along the Leine/Flüthe flood canal which is connected to the lake by a weir and several basins. 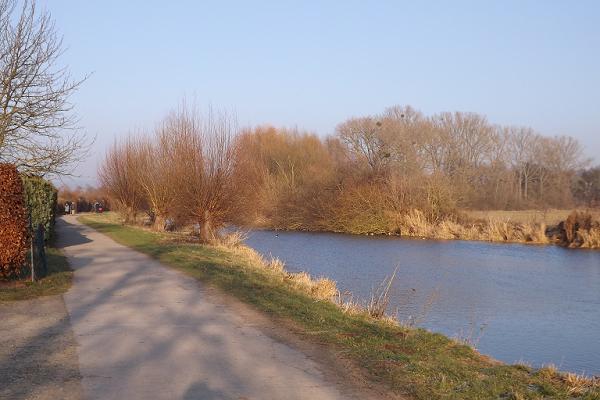 Compensation basin at the Flüthe rivulet
The weir, dam and canal system of Leine / Flüthe (an estuary of the Leine) and Kiessee lessens the danger of floods in the town of Göttingen, though the road running directly along the north side of the park still gets flooded when the Leine river rises too high. 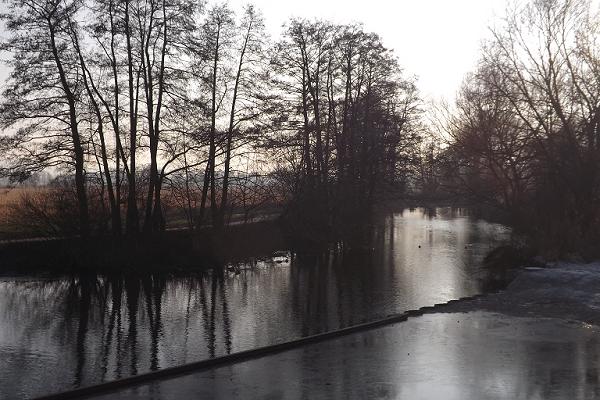 Retention basin at the Leine/Flüthe flood canal
I took some spring photos of the Kiessee a few years ago, and I also got some summer photos of the lake and the canal in my archives.
Read more! ¶ January 01, 2017 3 comments