18 Jul 2017
Neolithic Orkney - Skara Brae
Storms often destroy coastal land, but sometimes they also bring to light interesting finds that have long been covered by sand and earth. The Viking Treasure from the German island of Hiddensee is one of those. Another one from Orkney is much larger: an entire Neolithic village. 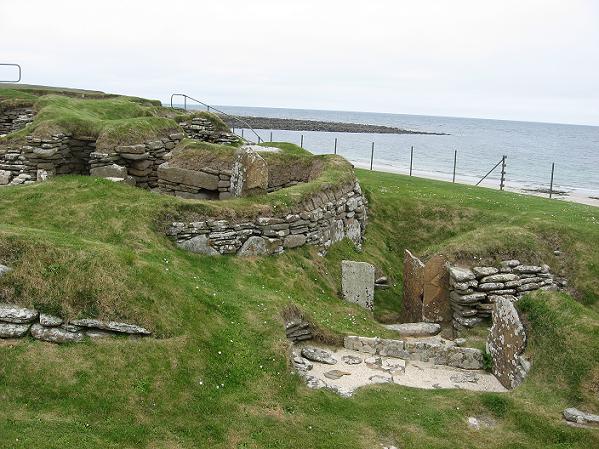 Skara Brae, a Neolithic settlement on Mainland Orkney
It was the winter of 1850 when a great storm hit Orkney. Its ferocous waves tore the grass layer off a mound known at Skerrabra in the Bay o'Skaill in the west Mainland. The opening in the mound revealed some stone buildings. The laird William Watt who lived in nearby Skaill House took an interest in the place and started digging around, together with James Farrer who had discovered Maes Howe. Their notes are unfortunately sketchy, but it can be assumed that they discovered what is today known as houses 1, 3, 4 and 5. 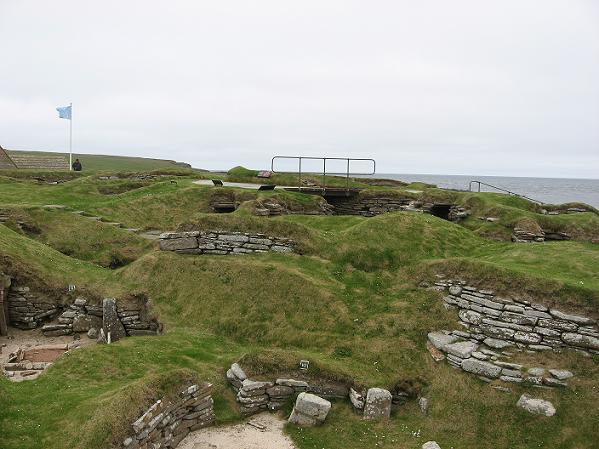 Another view of Skara Brae
No more research took place and the site remained obscure until the Watt family gave it into the care of the Commissioners of Works, the predecessor of Historic Scotland (1), in 1924. A year later, another storm destroyed most of House 3, and it became clear that the site needed to be protected against the sea. A wall was built which had to be repaired several times until today. The sea and coastal erosion continue to be a threat to the site.

Gordon Childe, the first Abercromby Professor of Prehistoric Archaeology at the University of Edinburgh was tasked with the further excavation of Skara Brae as the site was now called, in 1928. But he was not allowed to do any proper digging; the aim was to clean out the houses so they could be displayed to the public. 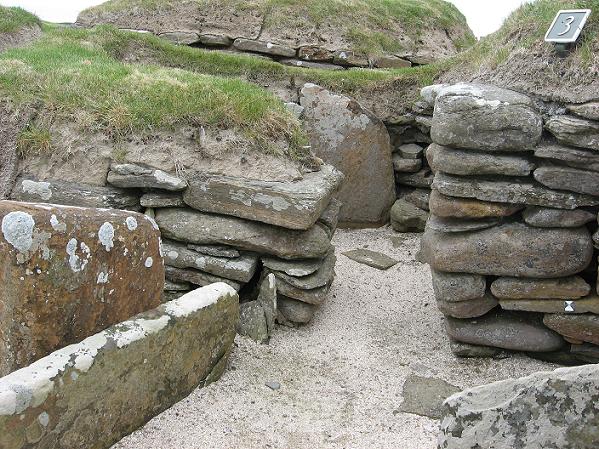 Remains of house 3
At the time, the site was thought to be a Pictish village (about AD 500), albeit Gordon Childe was not so sure about that and suspected an earlier date. But it would take until the 1970ies to confirm the date by radiocarbon dating: the village was inhabited between 3,200 - 2,500 BC, thus making Skara Brae part of the Neolithic world of henges and settlements around the Ring of Brodgar.

During the 1970ies excavation, some trenches were dug as well and more structures and artefacts discovered which are now shown in a little museum at the site. 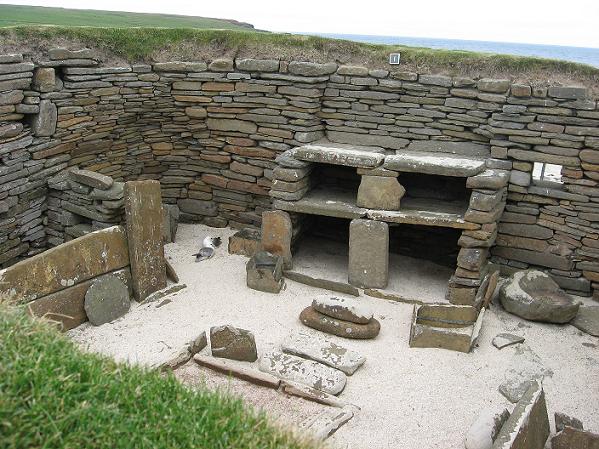 House 1
Skara Brae consists of eight dwellings which are connected by a series of low, covered passages. Due to the site having been covered by sand and grass, the structures are very well preserved.

Most of the houses have a standard design that looks like everyone bought their stuff at Stone Age Ikea (complete with a set of Billys): a square room with rounded corners, with a central fireplace in the middle, a shelved stone dresser opposite the entrance and beds on both sides; all made of stone slabs. Niches in the walls served for storage. Each house had a low door that could be closed with a stone slab and a bar.

One must imagine the beds to be filled with dried grass or heather and furs, and a fire burning in the hearth - it was quite a comfortable dwelling back in the Neolithic Age. 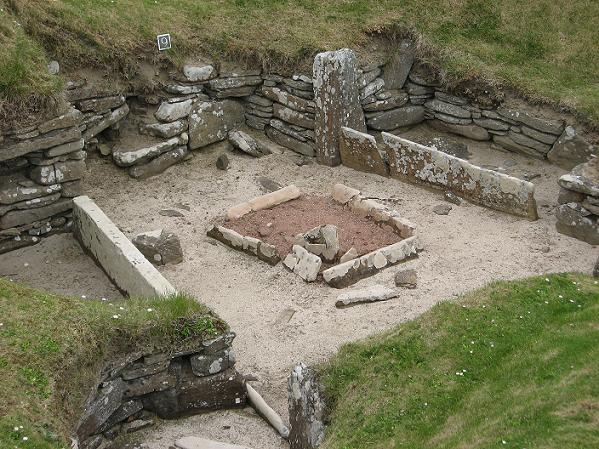 House 9
There are two distinct stages of construction. In the older houses (no. 9 and 10) of more circular shape, the beds are built into the wall in alcove-style, while in the newer houses they stand along the side walls in the room.

The older houses date to about 3,200 BC which makes them 500 years older than the pyramids in Egypt. They were part of a village prior to the major part of the buildings visible today und hidden under those. Besides houses 9 and 10, remains of that older village have been found beneath house 7. The older village had freestanding houses and no covered passages. 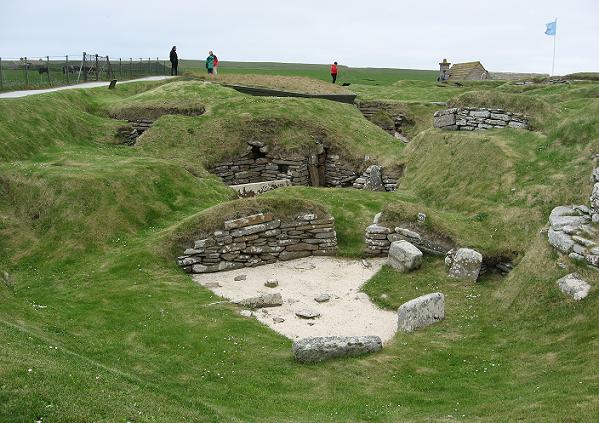 House 10
The 'newer' village has been built mostly atop the older one, using the midden as part of the wall constructions. Midden consists of the organic remains of a settlement which over time turn into soil, together with harder materials like stone chips and shells. The new houses were built into the midden, and midden was also used to fill the space between the double stone walls, making the entire wall structure about two metres thick.

We do not know for sure how the roofs were built. Whale bones or driftwood beams (there never were many trees on Orkney) may have been used for support, then covered with skins, seaweed, reed or turf - all organic materials that have perished. Seaweed has been used for roofing on Orkney until the 19th century. Since the houses were built into the midden, the village would have appeared as a mound, probably with the high roofs of the houses standing out. 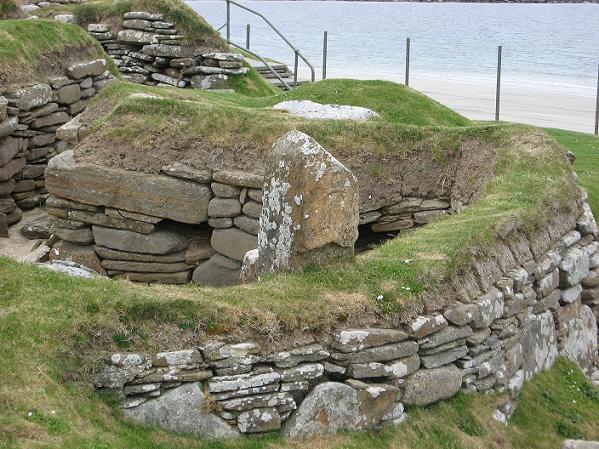 Exterior of house 4
With the current size, the place could have housed some 50 to 100 inhabitants. It is assumed that the village was never much larger than what we can see today, but on the other hand, since already one house was lost to the sea in 1928, there is a possibility that earlier storms destroyed more of the settlement.

A system of passages that connect the houses can be found in the newer village. The passages had a height of only about on metre and were covered with stone slabs. Since skeleton finds in house 7 show that the inhabitants were not much shorter than today's average, it meant that people had to stoop when entering the passages or passing through the doors of the houses. The main entrance of the passage could be closed by a barred stone door - maybe a measure of defense. 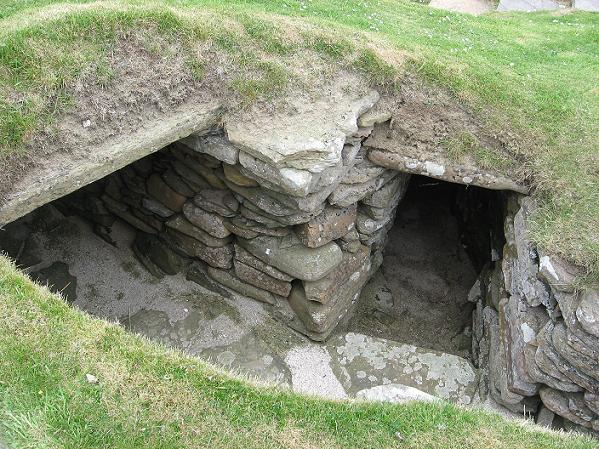 The passages
The similar layout of the houses and the position of the shelved dresser is an interesting feature. The dresser would be illuminated by the fire burning in the middle of the room and immediately visible from the entrance. It is assumed that valuable items would have been put there for display.

Another theory is that the right side of the house was the male, and the left side the female area. The beds to the right are usually larger, and on the left side, beads and other decorative items have been found. But there is no proof for this: beads could well have been male status jewelry and the larger beds used by mothers with children. 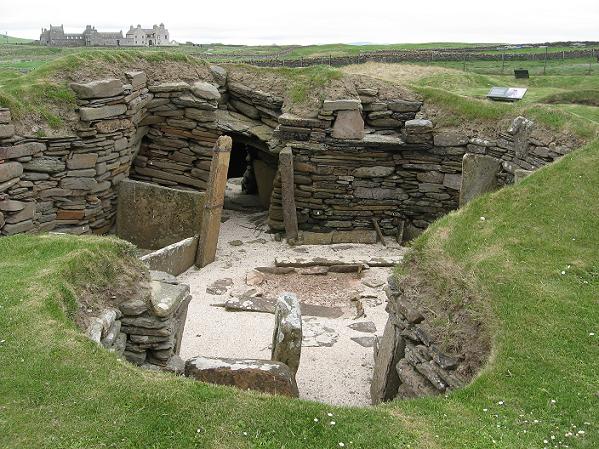 House 2
The thick walls had box-shaped holes for storage. In water bassins in the floor, made of stone slabs and clay, limpets were kept as fishing baits and perhaps also as emergency food, though they were not a regular part of the diet.

A somewhat larger hole; in some houses even a little rotund annex, is supposed to have been an indoor toilet. You can see one in the foreground of the photo of house 9 above. There was a surprisingly sophisticated drainage system underlying the village's design. 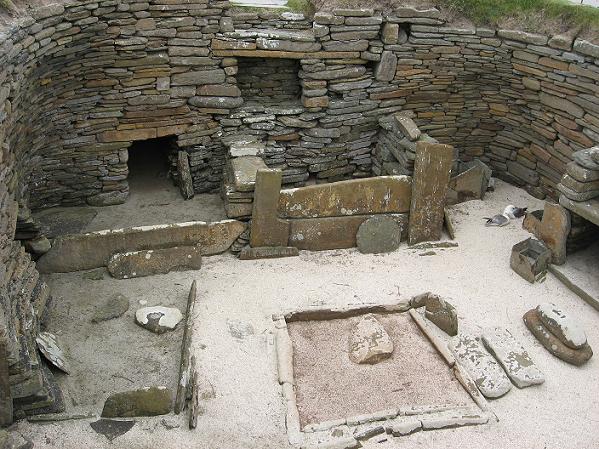 Storage holes in house 1
House 7 cannot be seen today because it is covered with a protective roof due to its importance. But there is a reconstruction outside of Skara Brae which is modeled after house 7. Since the house is a bit outside the rest of the village and can only be reached by a side-passage, and is built on sand, not midden, it may be the oldest structure on the site which has later been remodeled. House 7 also got an extra wall around its perimeter.

Two female skeletons have been found in a decorated stone cist under the right side beds (2) which must have been interred prior to the building of the house. The door of house 7 could only be bolted from the outside, another curious detail. One can only speculate about those features: The house could have been used for rituals, perhaps those involving the dead or the cycle of life (childbirth, menstruation etc.; 3) 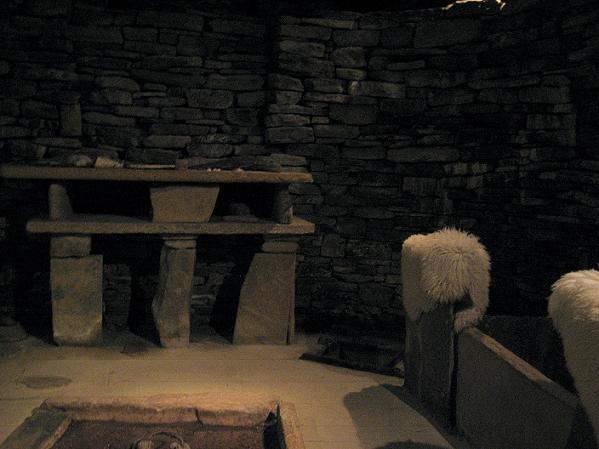 Interior of the reconstructed house
The Office of Works wanted to display house 7 to the public while also protecting it from the elements. A concrete layer was put on top of the walls which still stand to 3 metres height, supporting a glass roof with sliding panels. But it turned out that the weight of the concrete and glass had damaged the walls. Therefore the roof was replaced with lighter material and measures taken to ensure that humidity and temperature inside the house remain constant.

For years, visitors were allowed to walk between the houses and crawl through the passages. But while the stone walls look solid, they are actually quite fragile, and people walking on them and touching them will cause damage in the long run. Today, the site can only be seen from a path running at its perimeter. You can still get a good view from there and use the camera zoom for details. 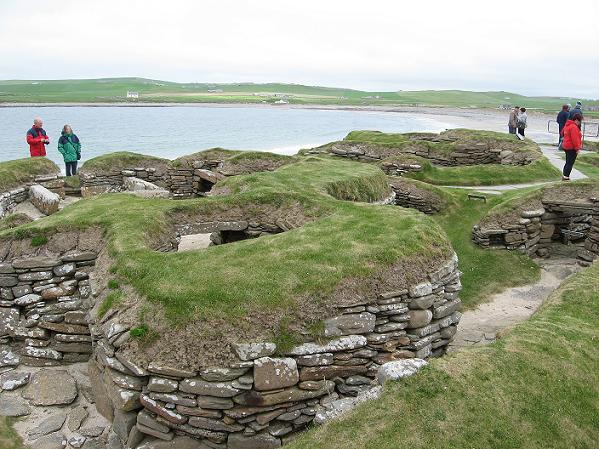 Skara Brae on a 'busy' day in June
Another special building is house 8. That one stood apart from the rest of the settlement to the west, was egg shaped instead of rectangular, with a fire place in the centre, but no beds and no dresser. The walls hold several alcoves. In front of it, the passage opens to a paved area which today is known as 'market place'.

The floor of the house was littered with fragments of flint and chert and other traces of toolmaking. Therefore, house 8 is considered to have been a workshop, at least for some time while the village was inhabited. Its separate situation could also point at a meeting hall or something along those lines. 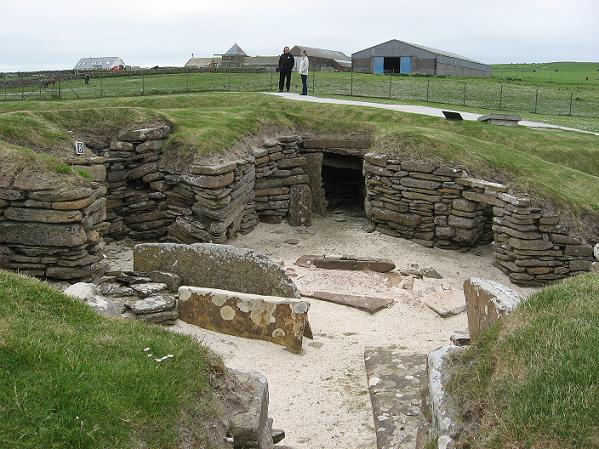 House 8
Gordon Childe thought that Skara Brae was abandoned due to some catastrophic event, a 'northern Pompeii'. But today it is thought that a combination of coastal erosion, sand blows, and changes in Neolithic society led to the site being abandoned. Sand and salt spray from the sea may have rendered the land unfit for cereal production and maybe even for grazing. A migration to more productive lands is a possibilty. In that case, the village may have been abandoned step by step, with the younger members probably leaving first.

Another reason could have been the development of an elite society that changed the social patterns of village life. Larger communities became more common, attracting migrants from the village. There are no signs of a violent end (like fe. a battle) to Skara Brae. 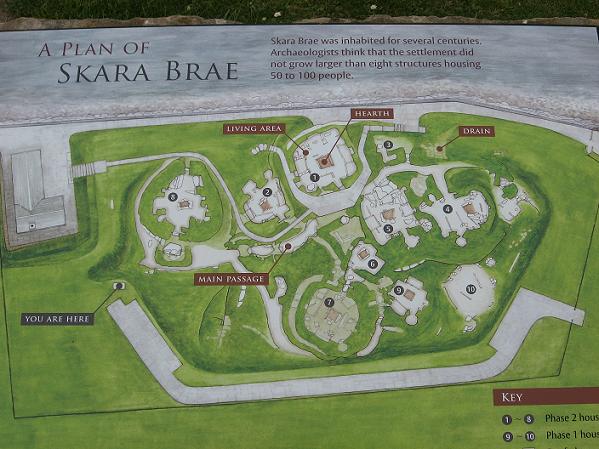 Plan displayed at the site
Another post about Skara Brae can be found here.

Footnotes
1) Since 2015 it is the HES, Historic Environment Scotland.
2) Which implies that in fact the right side may have been the female one.
3) Or maybe as prison, albeit a pretty comfortable one.