17 Sept 2017
Some More Castles in Thuringia - An Overview
I spent a week visiting the towns of Erfurt, Jena, and Weimar. I also went hiking to some castles in the surroundings. Here are some first impressions (posts about Jena and Weimar, and more detailed portraits of the castles will follow). 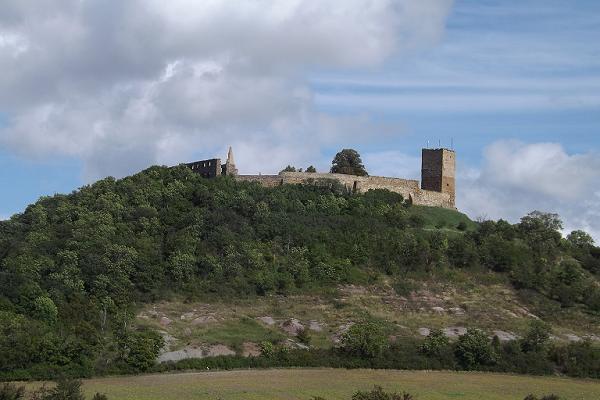 Some ten miles west of Erfurt, three hills of almost identical conic shape rise in the Thuringinan Basin, and each of them has a castle on top: Burg Gleichen, Mühlburg and Wachsenburg. The castles itself are pretty different, though.

(BTW, Google Maps got the location of Castle Gleichen totally wrong. It is several miles away from the second castle, the Mühlburg.) 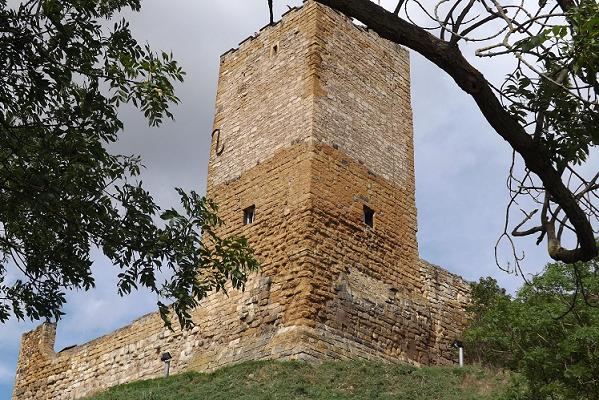 Castle Gleichen, the keep
Castle Gleichen is the largest of the three. It is first mentioned in a charte dating to 1088 and was used as residence by the counts of Gleichen until the 16th century. The remains range from Romanesque to Renaissance buildings. 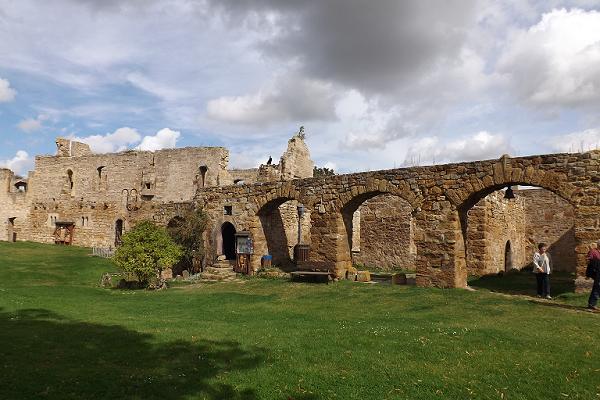 Inner bailey with old hall (left) and the chancelry
The castle is connected with the legend of a Count of Gleichen who was happily married to a noble lady. But then he went to a crusade, was captured by the Turks and rescued by a beautiful sultana whom he promised to marry. They went to the pope in Rome to get a dispensation and then returned home. The first wife must have been a model of all female virtues, because she didn't throw a fit but instead welcomed the beautiful rival, and all three lived happily ever after. 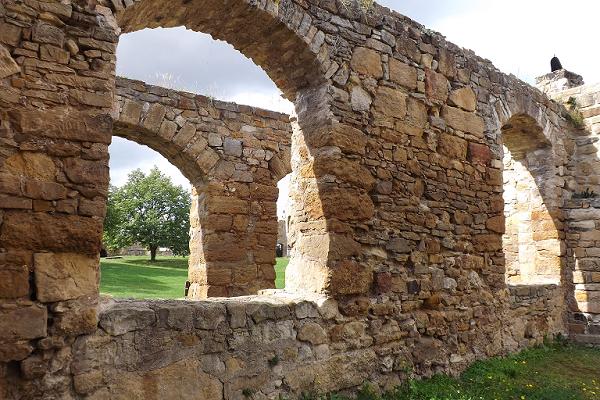 Detail shot of the 16th century arcades
The top of the hill has been flattened during the various changes in the layout of the castle, therefore the inner bailey is unusually large. There were more buildings than today, mostly made of timber. 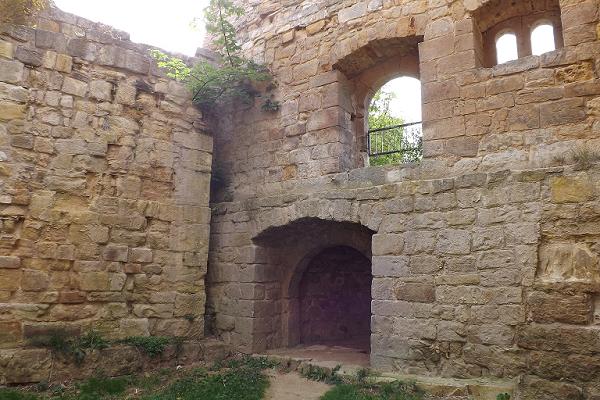 The old hall, interior
It was a fine day for hiking, warm and dry, and often sunny, though some clouds made for pretty dramatic photos, like the one of the Mühlburg below. 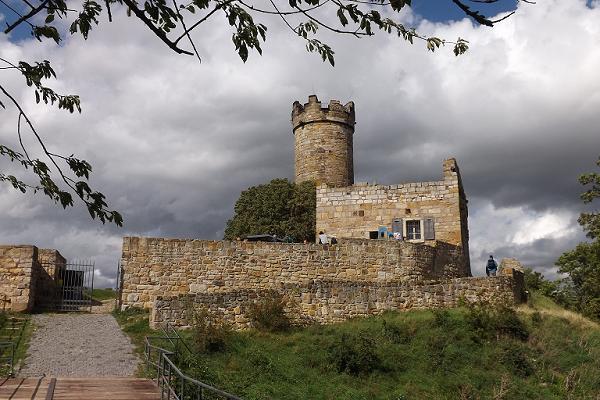 Castle Mühlburg near Erfurt
The Mühlburg is smaller, but its history is equally interesting (albeit lacking legends about beautiful sultanas). Most of the remains date to the mid-14th century. Significant traces of the fortifications remain; the trenches are still visible in parts, and the Mühlburg had a zwinger. 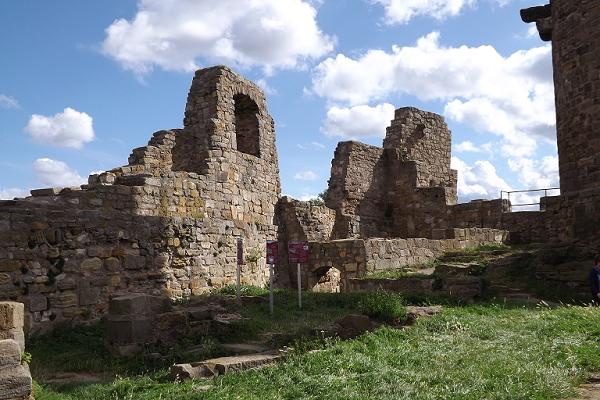 Remains of some buildings
Since the castle is close to the village of Mühlberg, it is a fine destination for a little family afternoon out, especially on a Sunday. There is a booth selling beverages and ice cream, and yes, Köstritzer dark beer and chocolate ice cream do go together. I earned myself both, lol. 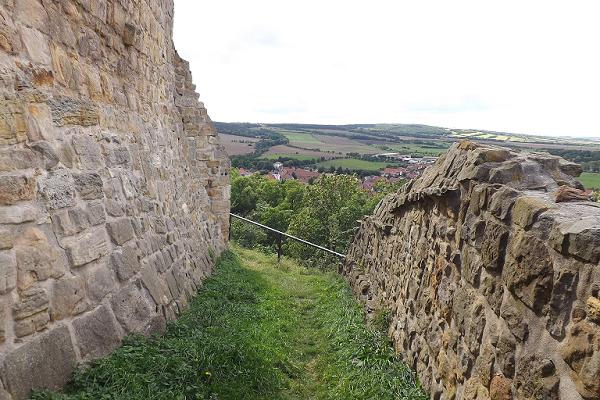 The zwinger
The Wachsenburg, which today houses a hotel, has been altered most, so I wasn't that interested in going there as well. It took me a day to cover the other two, after all. Luckily I got a ride back to Erfurt. 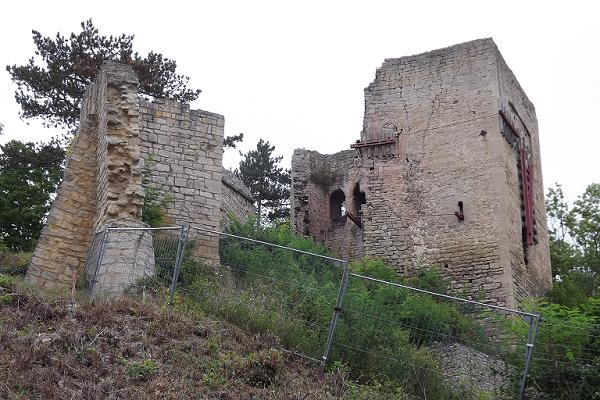 Castle Lobedburg near Jena
Castle Lobdeburg near Jena ist not a large castle, but it must have been impressive once due to its compact structures along the steep slope; the remains still are. The interior of the middle bailey is closed off because of the danger of falling stones, and the lower bailey is under repair. I managed to sneak through a gap in the fence to take some photos, though. 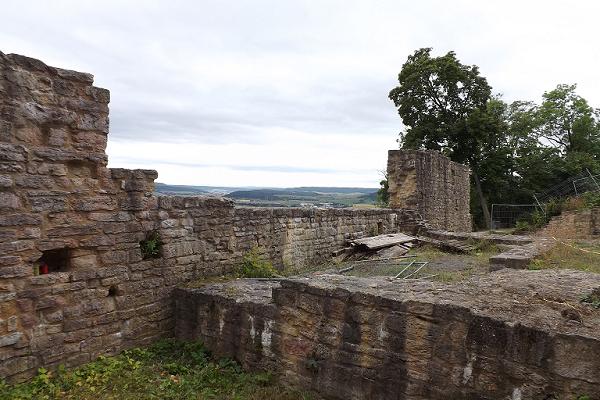 Lobdeburg, the lower bailey
The Lobdeburg dates to the 12th century. The castle was inhabited until the end of the 16th century, afterwards it was used as quarry until the Lobdeburg Society started to take care of the ruins about hundred years ago. 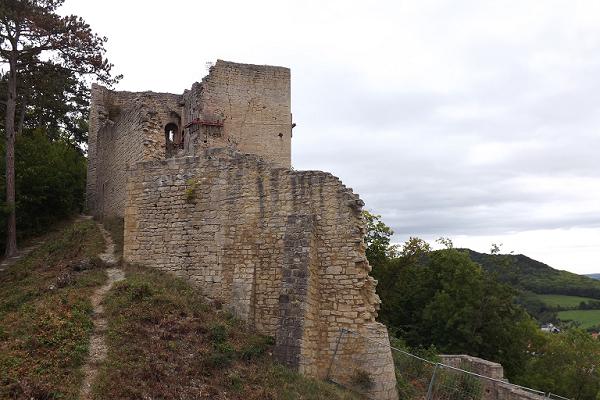 Remains of the middle bailey
The walk around the ruins is a bit of an adventure path right now. I was glad for my trusty walking staff. But I got some good looks on the fine Romanesque windows and other features. 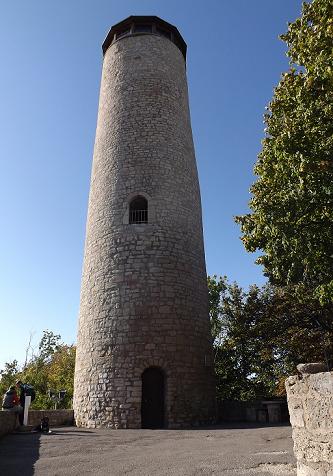 The Fuchsturm (Fox Tower) near Jena
The Fox Tower is the only remaining part of another castle near Jena. There was a chain of three castles on the Hausberg ridge in the 12th century; Castle Kirchberg was the most important of them. They were destroyed in 1304 and never restored except for the Fox Tower.
Read more! ¶ September 17, 2017 2 comments

7 Sept 2017
A Little Autumn Tour
I will be away for a few days traveling to Erfurt, Weimar and Jena in Thuringia. I've mentioned Erfurt a few times in my history posts; the town played an important role in the Middle Ages.

Weimar, and to some extent Jena as well, are mostly connected with the Weimar Classicism, an important period in German literature during the late 18th century. Its most famous representants are Johann Wolfgang von Goethe und Friedrich von Schiller. Visiting Weimar is pretty much like visiting Stratford-upon-Avon for the English people.

So there should be some Mediaeval buildings, maybe even a castle or two, and several late 18th century sites, for a change. 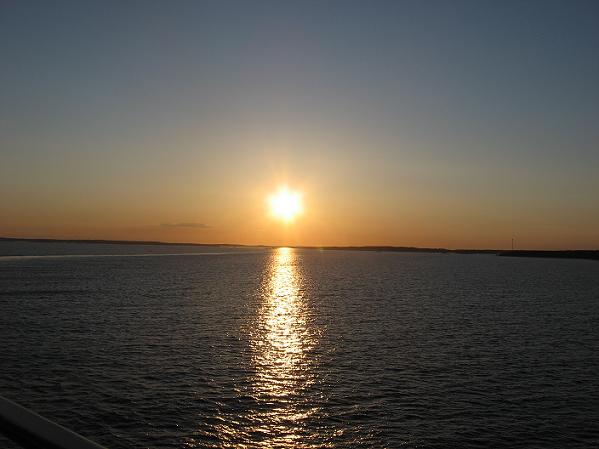 I'll leave you with a pretty sunset over the Baltic Sea.
Read more! ¶ September 07, 2017 0 comments