3 Oct 2017
A Virtual Tour through Mediaeval Erfurt
I had been to Erfurt, the capital of the county of Thuringia, back at the time of analog cameras, and only for a few hours. But it takes more than a few hours to explore all the interesting historical sites, so I always wanted to go back, especially since Erfurt plays such an important role in German Mediaeval history. 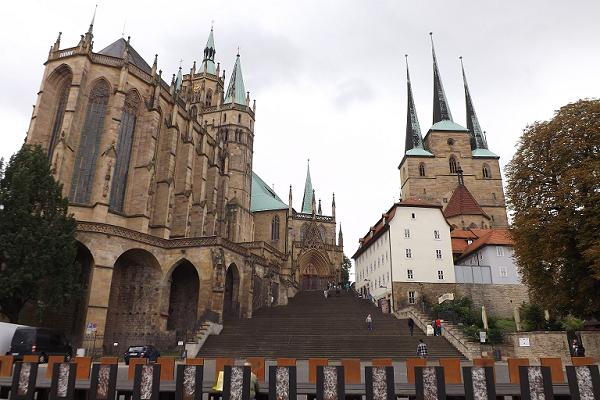 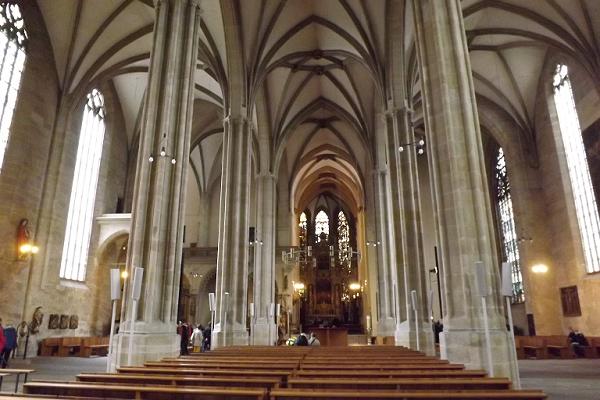 Cathedral, interior
The present building is early Gothic; a three naved hall church (which means all three naves have the same height) without a transept. The choir was added in the 14th century by enlarging the hill by those huge stone arcs called cavates which you can see in the first photo. Until the 19th century, litte houses snuggled inside those large caverns. 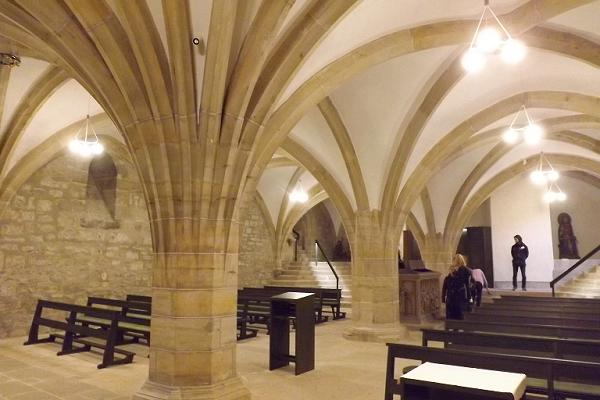 Cathedral, the crypt
The crypt, which should rather be called a lower church, was added together with the choir. It is usually not open to the public, but sometimes they'll leave the door open for a bit after an event. I was lucky to catch such a moment, since I have a soft spot for crypts. Crypt and cloister are today used by the University of Erfurt. 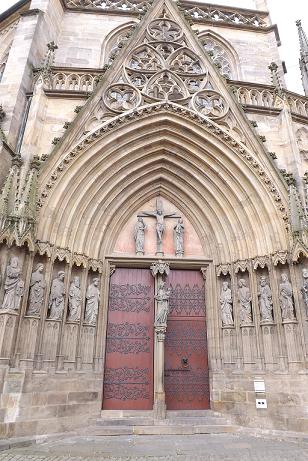 The main portal of the cathedral
The portal with the parable of the ten virgins was also added about 1330. The parable tells about ten virgins waiting to escort a bridegroom to the celebration. Five of them brought extra oil for their lamps and so when the bridegroom came, they could follow him. The stupid virgins had to run to the market to buy oil, missed the bridegroom and were excluded from the party. The parable means that one should always be prepared for the Day of Judgement. The motive is quite popular for church portals. 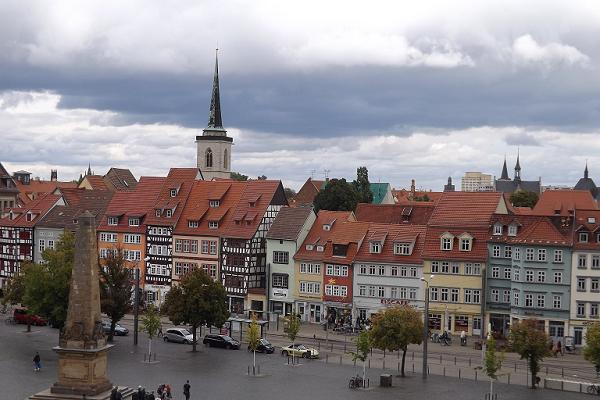 View to the cathedral square
The stairs are a popular place to sit and look down at the cathedral square. Halfway down the hill is a kiosk with a garden, which sells original Thuringian bratwurst and dark beer. Very yummy and just the thing for a little break. The weather produced some spectacular clouds, but there was very little rain. 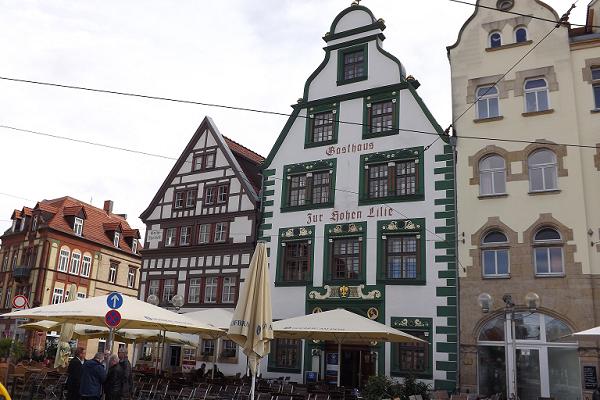 The Inn to the High Lily at the cathedral square
A particularly pretty house at the cathedral square is the 'Inn to the High Lily' (Gasthaus zur Hohen Lilie). It is first mentioned in a document from 1341, thus making it one of the eldest inns mentioned by name in Europe. The present building dates to the 15th century. Martin Luther stayed there in disguise, as well as King Gustav Adolf II of Sweden and other famous people. I had a lunch snack in the garden restaurant. 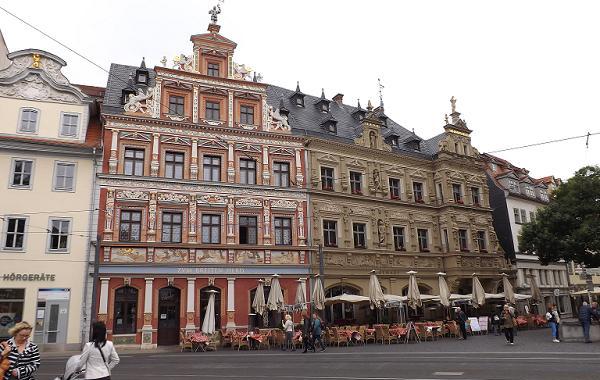 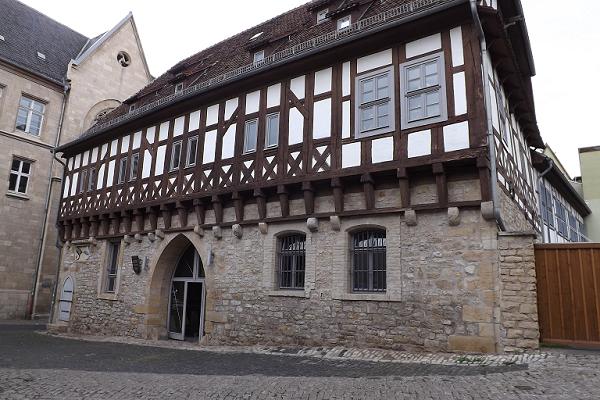 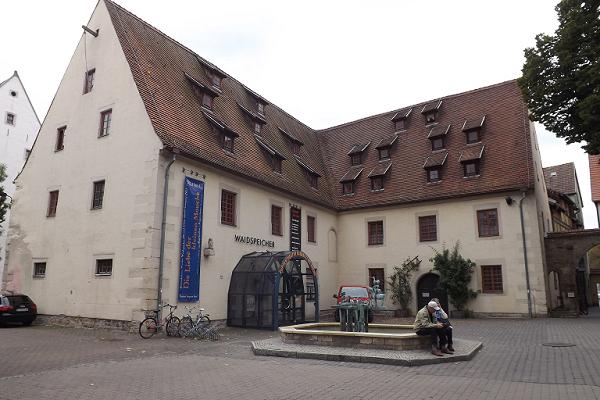 Woad Storage Hall
From the 13th to 16th century, the production of blue dyes made from woad was one of the foundations of Erfurt's wealth. The woad hall was built in mid-16th century for storage and working of woad. Towards the end of that century, the imported indigo developed into a competition with which the Erfurt woad could not compete in the long run. 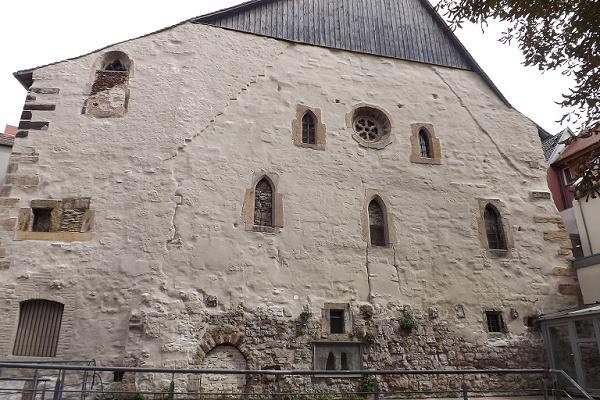 The Old Synagogue
The Old Synagogue dates to the 11th century, was rebuilt in 1270 and is thus one of the oldest synagogues in Europe. The synagogue had been abandoned after the progrome from 1349 and put to various other uses. It was converted into a ballroom and bowling alley in the 19th century and therefore survived Hitler's demolition program. The original use of the building was recovered in 1992. 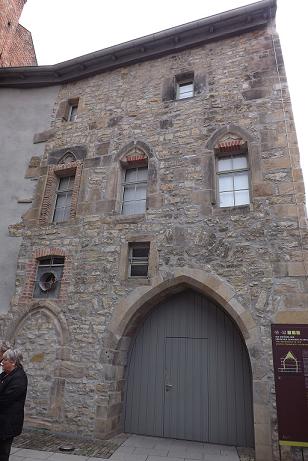 Old synagogue, the Gothic wall
I admit I was pissed that photographing inside the synagogue is not allowed - it is a museum, after all, and not everyone interested in Jewish history can afford to travel to Erfurt. I would have liked to share some more photos with you than just the above and one of the entrance side of the synagogue with its Gothic windows. 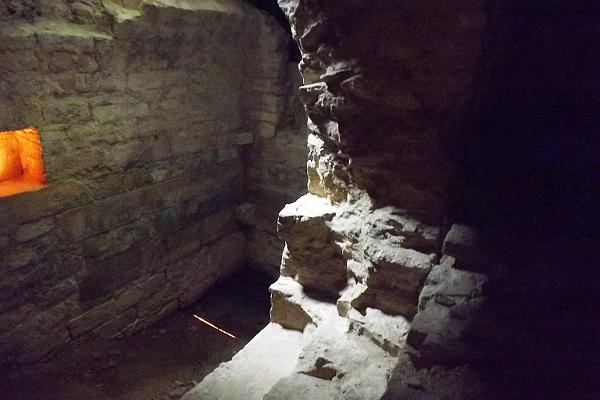 The mikveh
But I managed to snatch a shot of the mikveh, which was verboten als well *grin*. The 13th century Jewish ritual bath, which makes use of the fresh water of the Gera river, was discovered in 2007 under a former cemetary. It is one of the eldest in Germany, though the mikveh in Speyer is even older. 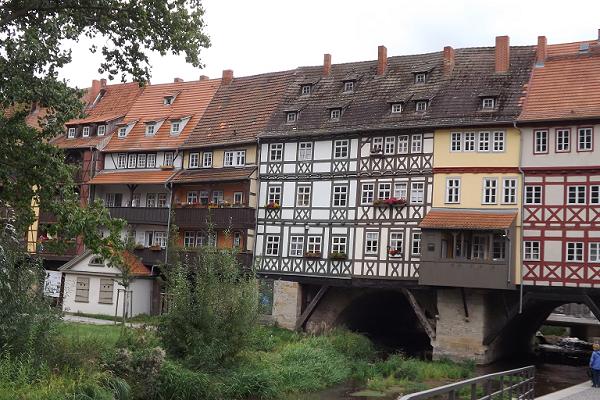 Merchants' Bridge
The Merchant's Bridge is the second iconic site in Erfurt. It started with a timber bridge across the Gera river in the 1250ies which was rebuilt in stone in 1325. The bridge is 125 metres long and 20 metres wide, supported by six stone arcs. It had been additionally expanded by timber constructions to allow for three-storeyed houses. 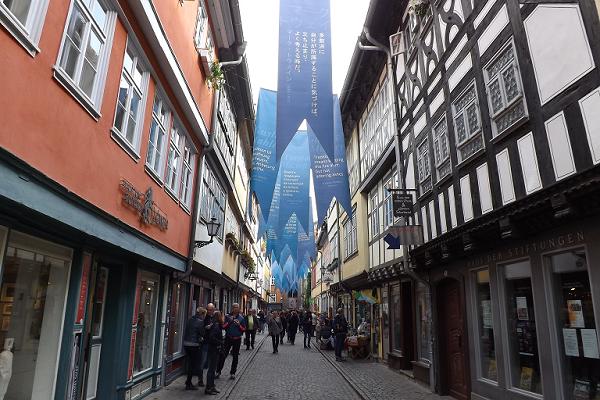 On the Merchants' Bridge
Originally, there were 60 small houses on the bridge, today there are still 32 (some houses have been 'merged'). There are little stores and boutiques on the ground floors, selling handcrafted pottery and carvings, spices, very good ice cream (Goldhelm) and other items. People still live in the upper floors, making the Merchants' Bridge a unique remnant of Mediaeval town architecture and a big tourist attraction. 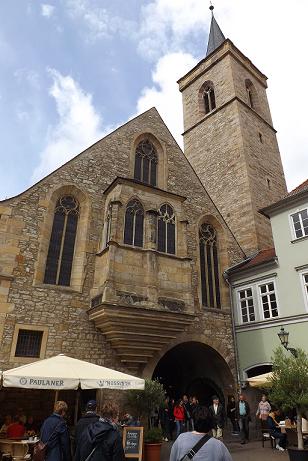 St.Egidius Church with entrance gate to the Merchants' Bridge,
and the Red Tower
Originally, the Merchant's Bridge was closed by gates. Above the remaining gate sits a little church which dates to the 12th century, though the oriel at the outside is late Gothic. Its separate belfry - an unusual feature in Germany - is known as the Red Tower. 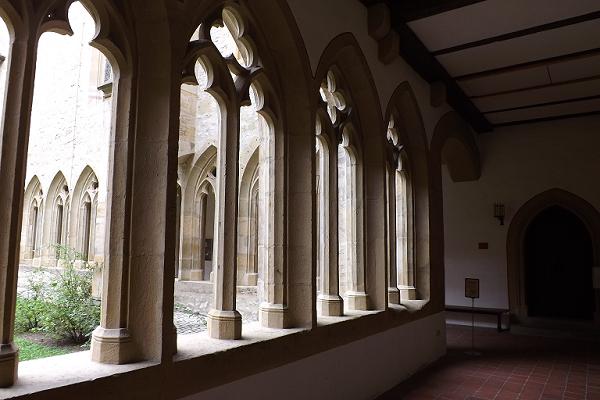 St.Augustine Monastery, the cloister
The Augustine Monastery was founded in 1276. The whole complex of buildings, including a library and a woad storage hall, were finished in 1516. After the Reformation and secularisation (1559), the buildings served various purposes; some of them suffered from neglect. A few of the buildings have recently been replaced with modern ones which fit surprisingly well, but most have been repaired and reconstructed. Since 2004, the former monastery serves as religious community centre. The church and some other parts can be visited during guided tours. 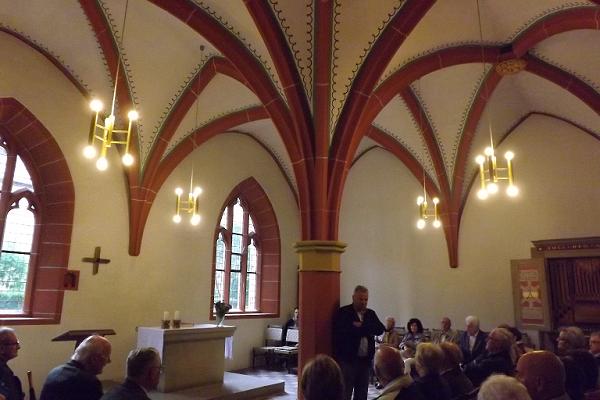 St. Augustine Monastery, refectory
The Augustine Monastery is famous because Martin Luther stayed there as monk 1505 - 1511; he then moved to Wittenberg (where he had his 95 theses nailed to the church portal in 1517). Little did he suspect he would change the religious landscape of Germany and Europe when he first studied the Bible and other writings in his cell. Collegium Maius
The Collegium Maius was the old university of Erfurt, the third eldest in Germany after Heidelberg and Cologne. It was officially acknowledged by the pope in 1392 and offered studies in four faculties: Theology, Philosophy, Law, and Medicine. The university was closed in 1816, and the building destroyed during WW2, but it was re-erected in the 1980ies. Since 1999, there is a university in Erfurt again (though it uses other buildings). 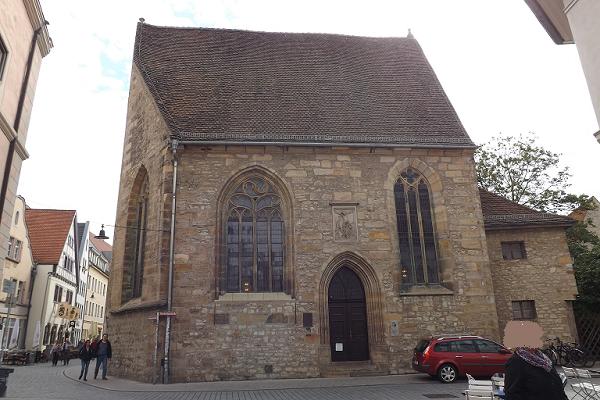 St.Michael's Church
St. Michael's Church dates to the 12th century, but - as so often with old churches - it was rebuilt in Gothic style in the 15th century. It was used as church of the university since 1392. Martin Luther held sermons there 1522 and the church became the first stronghold of the preachers of the Reformation in Erfurt. Dominican Church (Predigerkirche), interior
The Dominican Church, also known als Predigerkirche (Preachers' Church) was once part of a 13th century Dominican monastery. It is another fine example of the early Gothic style and another hall church without a transept. Today it serves as the main Protestant church in Erfurt. It is less tourist infected than the cathedral, but I recommend a look inside; it's pretty in a somewhat austere way. 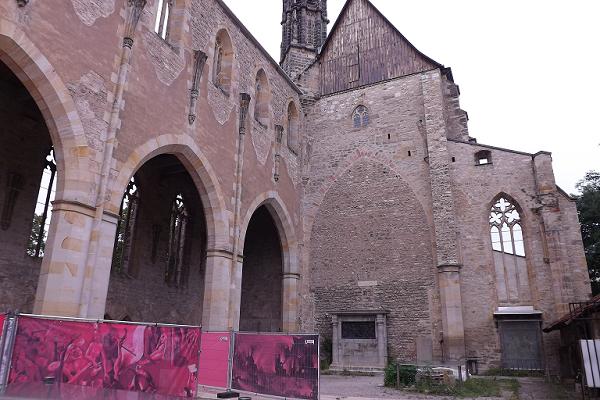 Ruins of the Franciscan Church (Barfüsserkirche)
Erfurt was littered with churches and monasteries in the Middle Ages. Not all of them survived the passage of time, but the more important ones were repaired after the damage of WW2. The 14th century Franciscan Church belonged to a monastery which already had been damaged during the Thirty Years War. The church was deliberately left a ruin after WW2, as memorial of the war. 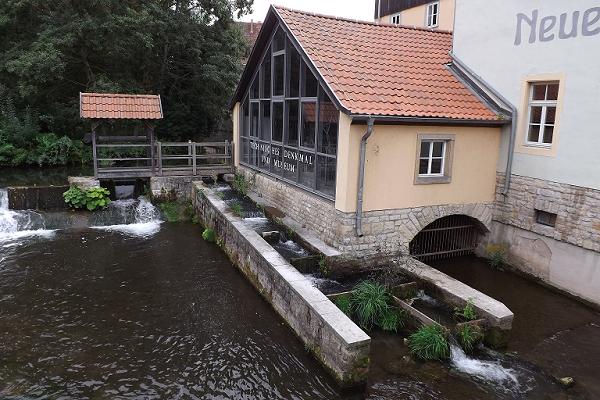 I hope you liked the little tour. There will be more detailed posts about some of the sites.  ¶ October 03, 2017

Comments:
Loved seeing all the photos of beautiful Erfurt. Visited there for five days about 2017 and loved it. It was wonderful to see an old city that hadn't suffered destruction during WWII.