9 Aug 2006
The Museum Park at Kalkriese
An extended essay about the Varus battle will appear soon, taking into account new discoveries.

Below is an overview photo taken from the museum tower. Of course, the landscape has changed a lot since 9 AD; what was a nasty bog where the Romans got stuck are now fields; the hill on the other side is less high because the land has risen thanks to a fertilizing system that used cut out grass sods turned upside down (the layer is about three metres today) trees have been felled. 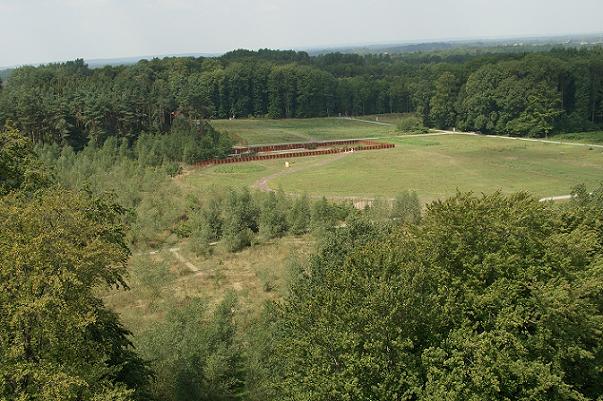 Picture taken from the watchtower (not a Roman one, a modern building that also houses the museum
The winding grey way in the middle that cuts right through the iron enclave in the centre of the picture is the Roman marching line; to the left is the woodcovered hill, to the right the former swamp. Within the area enclosed by ruddy iron plates, the original landscape, forest, German wall and wicker defenses, small sandy stripe and bog have been reconstructed.

The German forests were proverbial in Latin literature, dark, impenetrable, hostile. It became a topos, a metaphor for a country that would never become a Roman province. Sure, Germany was more densely forested than today, but even in 9 AD there were populated areas, clearings, fields, pasture, and settlements, long distance paths and trails. The Romans had built fortified camps as far east as Hedemünden at the Werra (Weser and Werra, the Roman Visurgis, are the same river*), the kernel of a Roman system of settlements and roads, left unfinished after Tiberius called the army back in AD 16. The disaster in AD 9 reinforced the Scary German Forests-topos, and the German woods were present in Latin literature about Germania ever since. 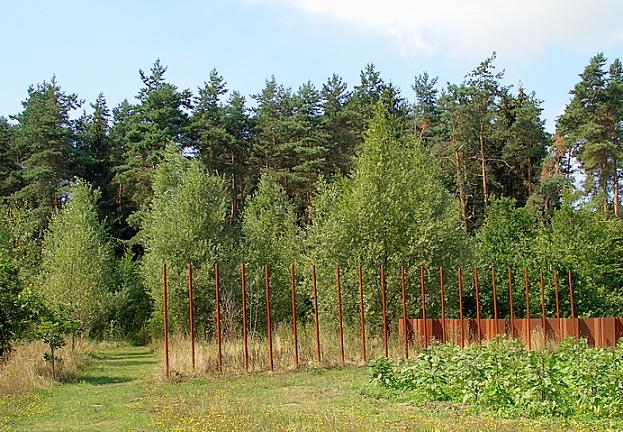 If you walk some 50 metres into the forest, it becomes a lot more like what the Romans saw. Boggy ground, dense foliage, trees hindering the way. And German altars, places where they sacrificed to their gods, gods that contrary to the Celtic ones never made it into the Roman henotheistic pantheon.

I would have liked to also see the skeleton of a Roman on an altar, and his skull on a pole, but since the park is visited by children, I assume it was considered too scary. I bet for some horse-loving teenage girls that hide is scary enough. 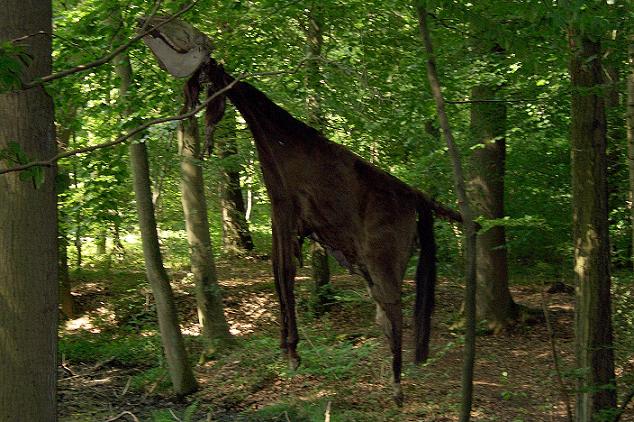 Roman sources agree on the fact that it had rained the days before and during the battle. I think they could be right there, German autums can be on the wet side. Now, imagine a Roman legionary carried some 30 kilo equipment; I have no idea what the stuff weighs when wet, but according to Bernard Hill's statement in the LOTR DVD extras, it's a lot (his armour as Théoden is a mix of metal and leather as well). In AD 9 the mail shirt was still the more common armour albeit some pieces of lorica segmentata, the rectangular plates connected with leather straps we know from the movies, have been found at Kalkriese. This new form of armour became more popular in the time to follow because it was less heavy than mail.

The poor legionaries also carried a large shield made of leather fortified plywood. That's a lot of leather to get soaked. Not to mention wet equipment doesn't work well: the Romans had a whole auxiliary company of Balearic slingers with wet slings, archers with wet bows, legionaries with wet feet, soaked shields and rusty mail, and mules with sore hooves.

And this sorry troop, already diminished and disenheartened by two days of continous guerilla attacks from the Germans, now gets driven into bogs by a horde of Germans more used to getting wet, with smaller shields and less armour.

The weather surely was on Arminius' side but would the outcome have been different with weather as sunny as I experienced at Kalkriese? The Romans still would not have been able to display their army in proper fighting order, and a marching column is always an easier target. The bogs would still have been there (like in this little, reconstructed patch), 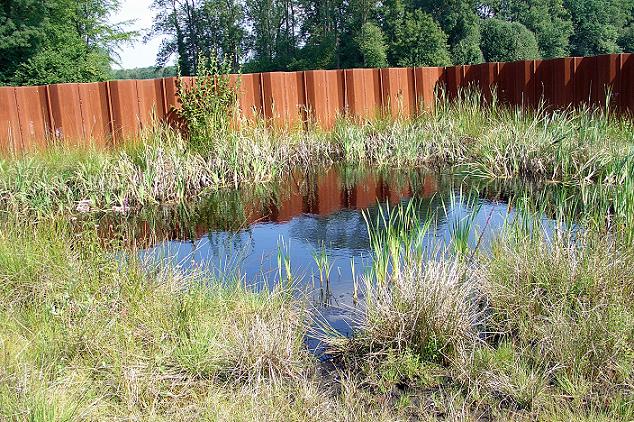 and we don't know how many Germans there were, not even the Roman sources, usually not beyond exaggerating the numbers, do mention any numbers at all. Maybe a few more Romans would have managed to break through but I think even with good weather, the battle in the Teutoburg Forest would have been a disaster. The problems the Romans encountered were too varied, and the psychological aspect plays a role as well - and if you talk about the boogieman long enough, people will believe in it.

Notes
* The old Germanic forms of both names are something like Visera / Wesera. In some German dialects a so called rhotazism took place, that is, a -s- between two vowels became a -r-. Since Germanic languages stress the first syllable of a word, the following syllables are prone to get contracted or weakened. Werera soon became Werra, while Wesera weakened the final -a- into -e- and finally lost it altogether and became Weser. The border between the two names is given by the fact that a rather large river, the Fulda, confluences into the Weser, and that looks as if Fulda and Werra join and become a new river. The name goes back to an Indoeuropean root *uis- that means 'water' and is also in the word Whisky.

Comments:
Wow! It's lovely there. I want to travel and see such places. I'd take pics galore to use for my novels and short stories.

Have "The Battle That Stopped Rome" by Peter S. Wells.
While his style sucks, and his logic sometimes faulty, it's an interesting read.
Thank you, Gabriele for giving me a picture I can align with the picture he creates.

Hi Zinnia,
thanks for stopping by. I get some of my inspiration from places I visit.

Bernita,
I've read some bad crits of the book and thus didn't buy it (yet).

Did they take out the metal plates that showed the Roman path?

I have to say that the reconstruction of the bog is quite impressive once you get there. (It's inside that fenced off area, which is actually dug out.)

Firle,
the plates are still there. The bog is very nice, with reed growing on the shores and all. And when you see how small the sandy stipe between the bog and the wall actually was, you start to feel pity for the poor Romans; having your legs stick in the mud and a big blond German wave a sword at your neck is not a situation I want to be in. :)

Your photos are works of art. This one's so evokative along with what you wrote to accompany it.

What time of year was the Varus battle? I ought to know but can't remember. The upland bogs I'm familiar with dry out partially in summer, so if this one does the same the narrow strip might have been even narrower if the battle was fought in the wet season.

According to some plants they found wrapped around the clapper of a mule bell, it must have been autumn.