31 Dec 2006
Happy New Year
I wish everyone a Happy New Year,
good health and lots of publishing contracts or whatever success you desire. :) 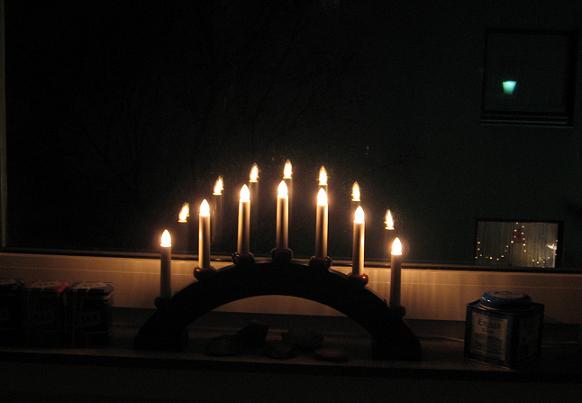 26 Dec 2006
Runes
I'm not a specialist on runes; I've only taken the basic courses. Thus, what I will do here is to give some general information that is acknowledged in research, and leave most of the problems out.

The etymology of the word 'rune' derives from Old Germanic rúna and means something in the way of 'secret'. There is a number of theories about the origin of the runic letters but none of these theories have so far been universally acknowledged or give a sufficiently founded explanation (1). In Viking times it was believed that the runes were given to mankind by the god Odin who in his turn received them in a dream after a long period of fasting (Edda: Hávamál, 138).

The oldest monuments (engraved on stones) are located in southern Sweden and Danmark and date from 250 AD onwards. Some of them display the entire alphabet containing 24 letters (sometimes grouped 8 x 3). The first six letters: f u þ a r k gave the the runic alphabets, or rune rows, as Düwel prefers to call them, the denomination futhark. 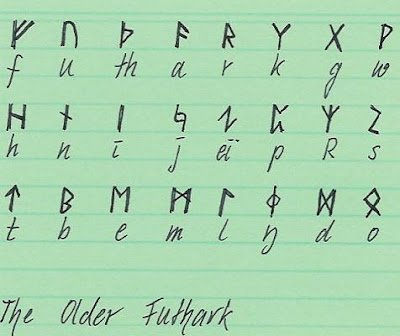 The system of 3 x 8 runes of the Older Futhark is proven by several inscriptions (2). This system could be used for a sort of encoding in secret runes, when not the actual letter was given but its position within the rune row. Occasionally, runes are written from the right to the left, and often they have one stave in common. So there are a lot of puzzles.

About 750 AD the alphabet changed and the number of letters was reduced. From 800 - 1150, the so called Viking period, we have the Younger Futhark with only 16 letters.

Imagine the deciphering problems of inscriptions with 16 letters to cover a range of 26 sounds. No wonder there are wars going on among the academics.

In the Younger Futhark some of the runes stand for several sounds: 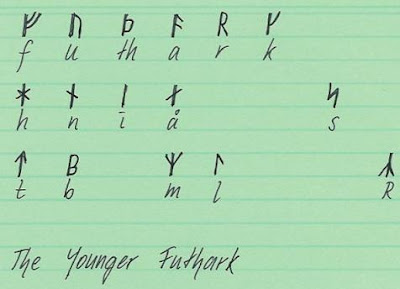 Whereas the inscriptions of the Older Futhark show one form of language (Ancient Germanic) without dialectal differenciations, the Germanic language in the Viking time began to develop into different dialects and later into languages in their own right. (3). That influencd also the pronounciation of several runes. The rune that is transcribed R in the North- and West Germanic languages is a sound between r and z and changes to r proper, whereas in the South Germanic (including today's German) language it is transcribed by z and changes into s sharp. The rune for ei came out of use rather soon because of a process called monophthongization. The rune for j changes into an velar å because the word jâra changes into âr(a). The old a-rune has changed to o (*ansuz > ós). And in Old Norse the R stands for ý (ýr). 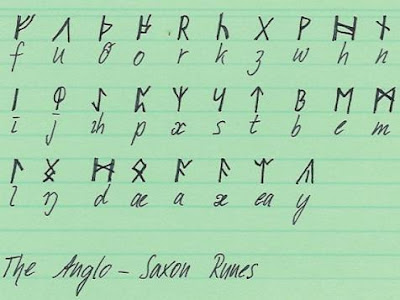 The Anglo-Saxon runes, on the other side, did not reduce the number of letters, but rather, added 4 more to the 24-Futhark to cover the additional vowels.

Because of their mythical origin of the runes they were in the Mediaeval Ages believed to have magical powers. The most well-known standardized list of reconstructed Ancient Germanic rune names is the following: 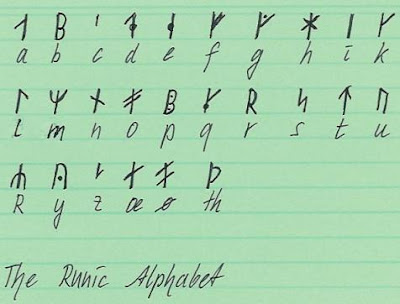 There is no sufficient explanation for the rune names, and some of them remain unsure. The only thing they have in common is the fact that they belong to the realm of cult like gods, animals, plants, powers of nature. Sometimes it is difficult to decide whether the magical rune name or the letter value are meant. In case there is a single rune we can be sure that it had the magical component of the name, but otherwise there had been a tendency in pre-war research to stress the magical component whereas nowadays it is rather attempted to find a literal explanation of doubtful inscriptions.

Runes can be found on various artefacts which can be engraved, such as weapons, jewellery, bracelets, caskets and others. Those written on perishable materials like wood or bone are mostly lost forever.

The majority of runic inscriptions are made on stones. They can consist of a single word, a short notice, but also encompass entire poems and stories (4). The largest number of findings dates from the Viking time. The art of writing runes was distributed with the Viking expansion from Russia in the East to Ireland in the West, from Piräus/Athens in the South to Greenland in the North. In total we have about 5000 runic memorials. In Sweden there are about 3000, in Norway 1100, in Danemark 700, in Iceland and in England 60 each, and we find 30 in Germany as well as on the Orkneys or the Isle of Man: and still new ones are discovered.

Widespread are memorial stones. They usually begin with a formula "this stone was made by X in memory of Y", often including some additional information about Y. Since X and Y in a number of instances are historical persons, we can glimpse some useful information (5).

There is a 11th century memorial stone, made by one Tola in honour of her son, Harald, brother of Ingvar (who was the leader of a great expedition to the East). Part of the inscription is in poetic language, so called fornyrðislag, and reads (the translation is mine):

Like bold men they traveled
Far to get gold,
They fed the eagle
In the East,
They died in the South
Under Africas sun. (6)
In the early 1960ies diggings took place near the Tyska Bryggen in Bergen / Norway where an amazing find of ca 600 mostly wooden pieces with runic inscriptions was discovered, which had long been conserved in a favourable climate. They date back to the 12th - 14th centuries, and most of them have a very mundane character untypical for most of the runic engravings: business letters, bills, and love poems (7). Knowledge of the runes, in the beginings reduced to a small group of specialists, spread further, and in the 14th century, as the Bergen-findings show, had become quite common. Nevertheless, shortly after this time the use of runes fell into a final decline.


Literature
Klaus Düwel. Runenkunde. Stuttgart (Metzler), 2nd edition 1983
Wolfgang Kuhn. Runen. Berlin (de Gruyter), 1970
Additionally, I have used the papers and my notes of the "4th International Symposium on Runes and Runic Inscriptions" which was held in August 1995 in Göttingen.

Notes
(1) There is no Basque origin; that language is "the universal solution for all unsolved language problems", as one of my professors ironically put it. There is no connection to Ogham, either.
(2) The groups are represented on the bracteats of Vadstena and Motala, the oldest undistinguished row ist to be found on the stone of Kylver / Sweden.
(3) The Germanic languages - which form a part of a greater superfamily, the so-called Indoeuropean languages - are divided into three families, North Germanic (Icelandic, Norvegian, Swedish, Danish, Faroean), West Germanic (Anglo-Saxon, Frankish, Lower Saxon, Bavarian, Alemannic, Dutch, Flemish, Frisian) and East Germanic (Gothic, Burgundian).
(4) Short notes were often something like: "X made", "Y owns me", or formulas invoking heathen magic. The longest example, the famous stone of Rök, contains 750 runes. Longer inscriptions are written in Younger Futhark.
(5) One example is the great stone of Jellinge / Danemark (late 10th century): the inscription reads "haraltr kunukR baþ kaurua kubl þausi aft kurm faþur sin auk aft þaurui muþur sina sa haraltr ias saR uan tanmaurk ala auk nuruiak auk tani karþi kristna". Translation: "Harald ordered this memorial to be made after (= in memory of) Gorm, his father, and Thyre, his mother; the same Harald who conquered all Danemark and Norway, and made the Danes Christians." (Düwel, p. 60)
(6) My translation. The exact meaning of "Serkland" is not clear: It can mean the land of the Saracens, but also "land of silk", which would encompass the Muslim area round the Caspian Sea (Düwel, p. 66). I decided for Africa because of the alliteration.
(7) About this recently: Edith Marold. Bergen als literarischer Umschlagplatz. in: F. Paul (ed.) Arbeiten zur Skandinavistik - 13. Arbeitstagung der deutschsprachigen Skandinavistik 1997 in Oslo. Frankfurt (Lang) 2000, p. 189-201. She proves the continental influence on these poems. Amazingly, some were written in Latin language, but with runes.
Read more! ¶ December 26, 2006 10 comments

24 Dec 2006
Fröhliche Weihnachten
I wish everyone a Merry Christmas! 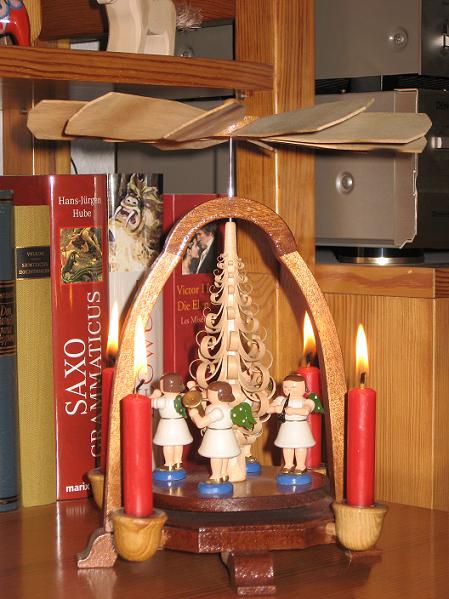 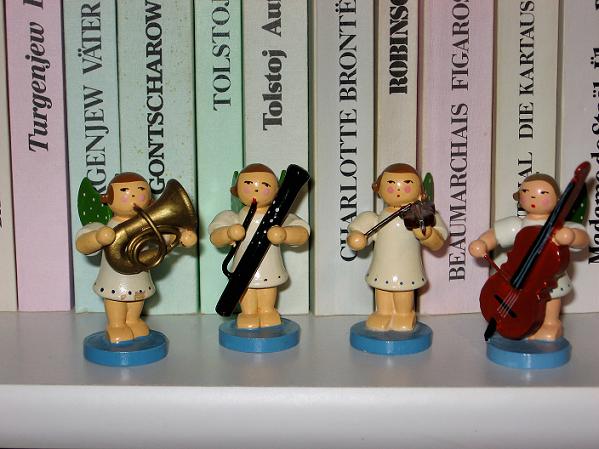 Pyramid and figurines German handcrafted work.
The pyramid is an heirloom from my great-grandmother, the figurines are a bit younger.
Read more! ¶ December 24, 2006 4 comments

21 Dec 2006
Pre-Christmas Inundation
Tomorrow is Dec. 22 and I haven't bought a single present yet. Not that I need to buy many, but still...

The dust bunnies in my flat threaten to overpower the plot bunnies; and I'm not sure 'rat nest' is a fashionable way to wear my hair - I need a cut tomorrow. I've baked one badge of cookies so far, and no idea what to have for Christmas dinner.

Has anyone seen all the time I still had at the beginning of December? 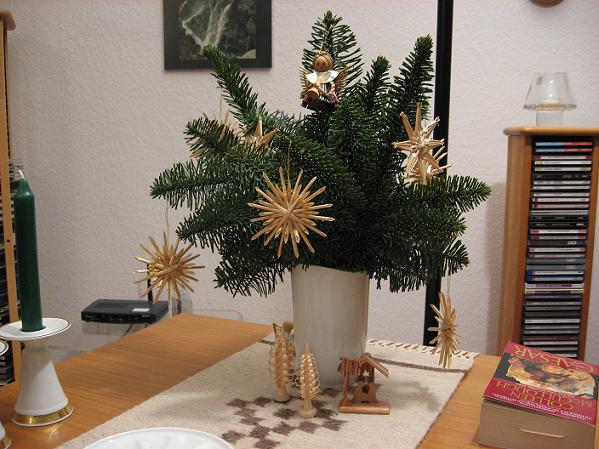 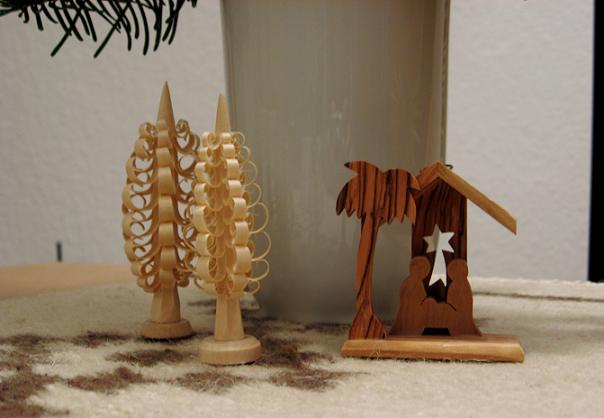 Close-up, without flash again, but this time I managed to keep my hand steady.
The little trees are Erzgebirge craft again, the cradle is handmade from a Kibbuz in Israel.

And Scott has hooked me something good on Conan. Evil guy; there's two more volumes in the series and I'm out of money.
Read more! ¶ December 21, 2006 9 comments

19 Dec 2006
A Glimpse of Christmas
Part of my Christmas decorations. The trees and the little snowman are handcrafted art from the Erzgebirge. 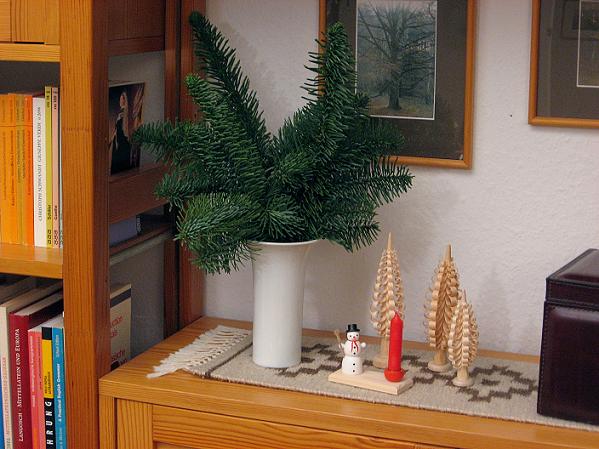 Close up of the snowman and trees. 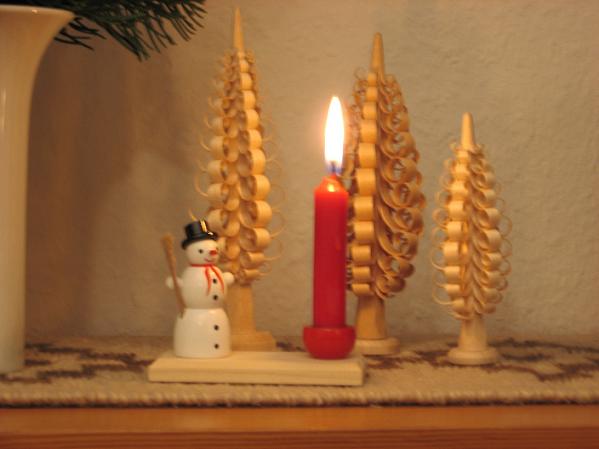 Done without flash or tripod, therefore the pic is not perfectly sharp. But flashes tend to make photos look cold; and a tripod is something I still have to get.
Read more! ¶ December 19, 2006 4 comments