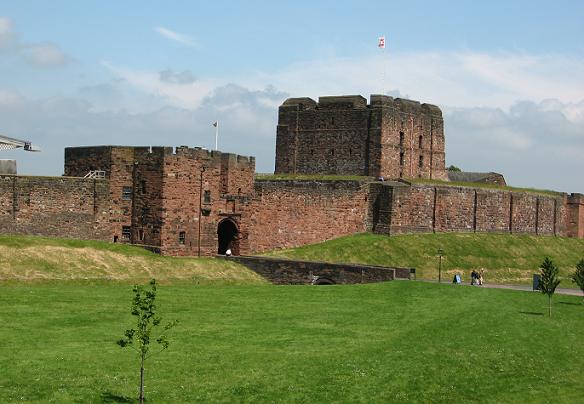 The site at the British west coast, known first as Luguvallium and part of the Hadrian's Wall defenses, had seen a sequence of Roman forts from the 1st to 4th centuries AD, and then the turbulent times when Romano-Britains, Anglo-Saxons, Picts, Scots and Vikings strove for power; at that time the place was known as Caer Ligualid.

The next traceable step in the history of fortifications took place in 1092. In the wake of the Norman conquest, William Rufus, son of William the Conqueror, raised a castle on the old Roman site, a Norman style motte and bailey construction made of timber. He had pushed the Scottish frontier north of Carlisle and needed a strong border fortification. During the following century it was refortified in stone by Henry I. The 12th-century stone keep is the oldest surviving structure in the castle, which was frequently 'updated' in the centuries to follow. For example, the rounded, shot-deflecting battlements of the keep were added when Henry VIII adapted the castle for artillery in 1540. 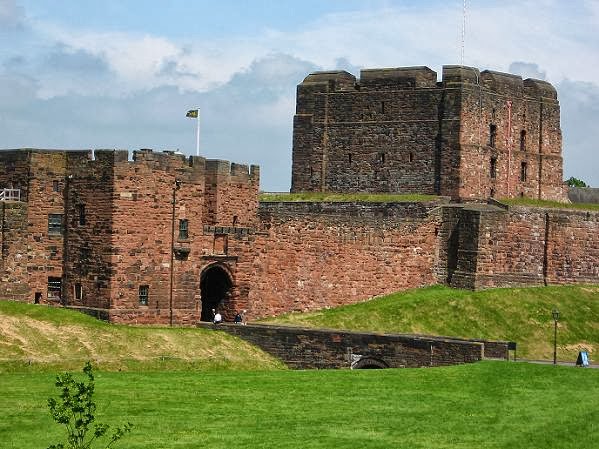 King David I of the Scots captured Carlisle in 1135 and completed the changes made by Henry I, but in 1157 it was retaken by Henry II who added a second curtain wall.

Carlisle Castle played a role during King Edward I's conquest of Scotland. It also served as prison on occasion, as carvings in a room in the keep, probably made by captives held here by the future Richard III in 1480, demonstrate.

Situated so close to the Scottish border, Carlisle Castle saw lots of action. Mary Queen of Scots was imprisoned within the castle for a few months in 1568, and it was besieged by the Parliamentary forces during the English Civil War in 1644. Important battles for the city of Carlisle and its castle took place during the second Jacobite rising against George II of Great Britain in 1745. Carlisle and the castle were seized by the Jacobites, but they were driven north by the forces of the Duke of Cumberland. Carlisle was recaptured and the Jacobites were jailed and then executed.

Comments:
Ooh, thank you for this! I'll edit my post and put in a link.

The castle really has a fascinating history, doesn't it? Do you have any more info on the captives held there by the future Richard III?

Not much, Alianore. Richard III had strong connections with Carlisle in his function as Warden of the West, and those carvings in a room in the keep are said to have been made by prisoners. A booklet about Carlise Castle I forgot I bought (I bought too many of the dang things, lol) has some closeups of the carvings, but no more information.

I have more pics of the castle, so there will be more posts.

Impressive castle, and awesome picture. Thanks for sharing the picture (and the information *g*).

But is is like JUST ONE chocolate chip cooky.

Wow. What an amazing construction. One day I will have to visit the British isles and see all of these castles in the flesh :)

Hank,
I added a second pic so you don't have to go to sleep hungry. :) And there will be more.

Meryl,
the castle is HUGE. And I've seen a few in my life to have comparison.

I think the future Richard III led a Scottish campaign for his brother around 1480, so I guess that would be where the captives came from.

Hm, sounds like the setting for a handsome laird who falls in love with Richard's daughter or some other violation of history. *grin*

Oh, I can just see it now! Or maybe the laird's daughter could fall in love with Richard III. There could be a scene where Richard III has to dress in a kilt . . .

Ohh, if he looked like the figure in the little Richard III musem in York, that would be nice.

1600 years as a major fortification isn't bad, is it? The Roman fortifications were important during the 7th century, and clearly a source of a certain amount of local pride. Bede records a story of the queen of Northumbria and St Cuthbert being given an antiquarian tour of the fortifications and a working Roman fountain by the local dignitaries in 685 AD. (Which implies the aqueduct was still working, nearly 300 years after the conventional 'end of Roman Britain'). Kathleen Herbert makes Carlisle a thriving city and the capital of the highly civilised Urien Rheged in the 580s in her novel Bride of the Spear .

How nice to have a specialist of the Times In Between onboard. :)

That's a long survival rate for Roman fortifications; in the eastern part they had been reused to build other things at that point.

Is that novel worth reading?