17 Jul 2007
Mithraeum at Brocolita (Carrawburgh)
Mithras came from the Mespotamian and Persian pantheon, god of light, of oaths and treaties, of truth and justice. He supposedly was the god of the warrior élites in Mesopotamia and Persia, though in the latter religion he stood in competition to Ahura Mazda.

His cult was carried west by the soldiers of the Roman Empire, and at the end of the first century AD he had become one of the most popular gods among the soldiers. Caves and grottos were now seen as places sacred to Mithras. The Mithras mysteries were celebrated in subterranean buildings, the mithraea. A good number of these has been discoverd all over the Roman Empire. Central part of the celebration was the killing of a bull, replaying the killing of the primordial bull by Mithras, the fight of Good against Bad, in some versions the creation of life. 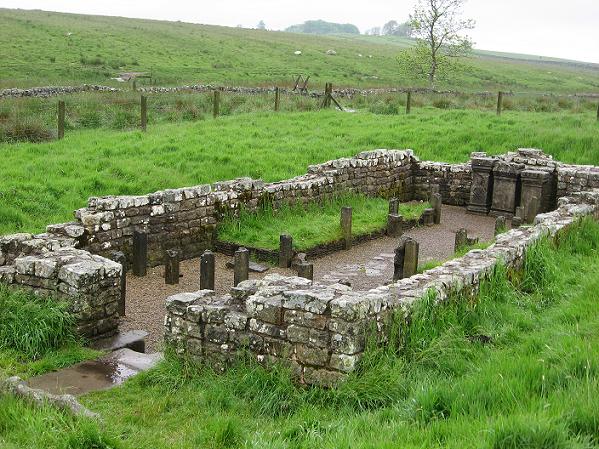 Even some emperors (Commodus, Julian Apostata) became members of the Mithras mysteries. Because of its popularity, the cult stood in competition with the Christian religion, and there were similarities between both. The Mithras cult knew something like the last supper where the members shared bread and wine in commemoration of the last supper Mithras shared with his disciples before he entered his sun chariot and descended to heaven. They also believed in ressurrection and eternal life after the body went through the spheres of the planets (the 7 then known) and some sort of final judgement. 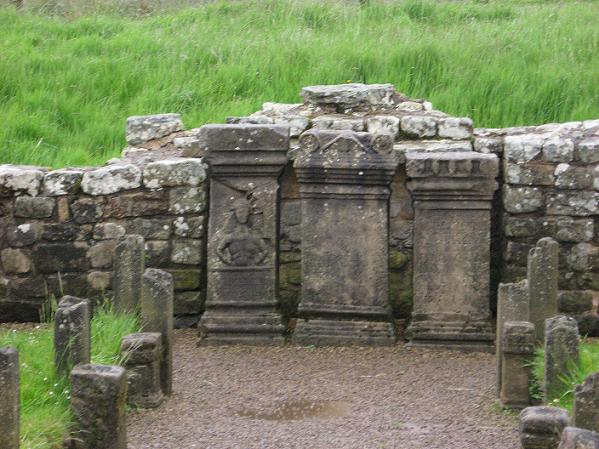 Closeup of the sanctuary
Almost everything we know about the Mithras cult comes from iconography (sculptures and reliefs), there is little written information because the cult was supposed to be a mystery to all but the initiated. There have been seven grades of initiation, and membership was restricted to men. Its aim was the fight against untruth, treason, and bad morals. Membership in the Mithras mysteries didn't exclude membership in other religious cults. 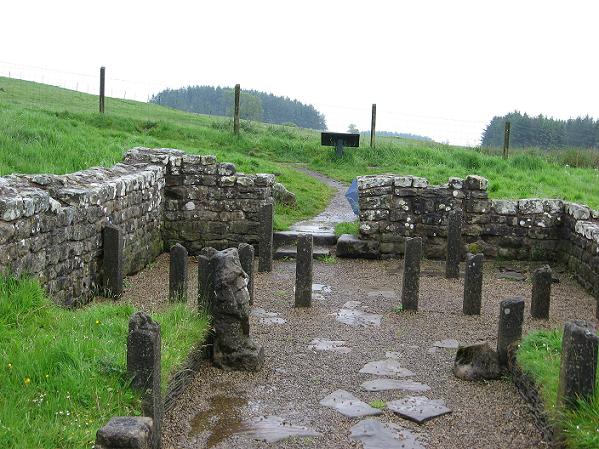 Closeup of the anteroom
The blue umbrella peeking out from the entrance is mine. :)
The mithraeum at Brocolita (Carrawburgh) was built about 200 AD. The altars were dedicated by the officers of the Batavians stationed in the nearby fort, the main altar depicting Mithras slaying the bull has been destroyed - assumably by Christians who saw the the Mithras ceremonies like the above mentioned final supper as parody of their own religion.

The mithraeum was originally a dark room with only few lights, most of them close to the altar. The anteroom was probably used for initiation tests. In the central nave, stone benches would have stood on both sides. At the far side lies the sanctuary. Mithraea were small and usually didn't hold more than 30 to 40 people. 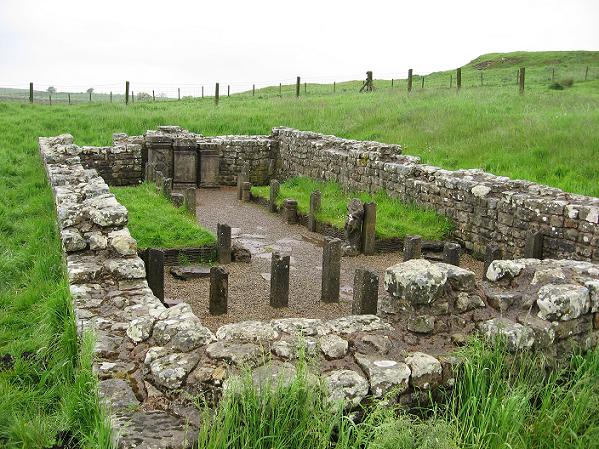 The mithraeum seen from the other angle
The mithraeum at Brocolita was discovered by chance when after a dry period the ground sank and some stones became visible. It was excavated in 1949. The altars have been replaced by replica; the originals are in the museum at Newcastle, while other finds are displayed at Chesters. 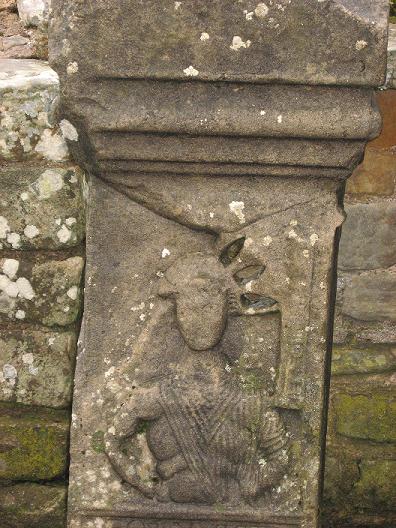 To the left is a closeup of one of the altars depicting Mithras as Sun Charioteer. If you look closely, you can see that the rays surrounding his head are cut out of the stone, and behind them is an hollow where an oil lamp would be put so the rays shone in the dark. Time has destroyed part of the corona.

The identification with the sun god became so strong that Mithras was celebrated as Sol Invictus in the Roman pantheon.


I want to thank my very kind hostess in the B&B in Haltwhistle for having been able to see this one. She had offered to come and give me a ride back from Housesteads because the bus time schedule was such a mess, and then asked if I was in for some more walking through wet grass and rain, and drove me to Brocolita. It was worth getting wet.  ¶ July 17, 2007

Comments:
Awesome pictures, and thanks for the explanations. It's all very interesting to me.

Great post! What sort of initiation tests do you think they would have had? Love the photos and the umbrella made me laugh.

Shelley,
there are only speculations. Some present the initiation like somehting Masonic, others say it involved the blood of a bull and tests of courage. Probably a blindfold, too. :)

I'd better not time travel there, then. I'm not that good with blood. I'd definitely need the blindfold.

Shelley, yes it was a Men Only club. Which is one of the reasons I'm surprised that some Christians saw the Mithras mysteries as such a threat to their religion.

Hey, happy to found this blog...very interesting...thanks for sharing... tarja