7 Aug 2007
Meet Flavinus, Signifer of the Ala Petriana
No, not one of my characters this time (though he might fit into Eagle of the Sea), but a cavalry soldier whose grave monument survived, because it ended up in Hexham Abbey, probably during Wilfrid's time. 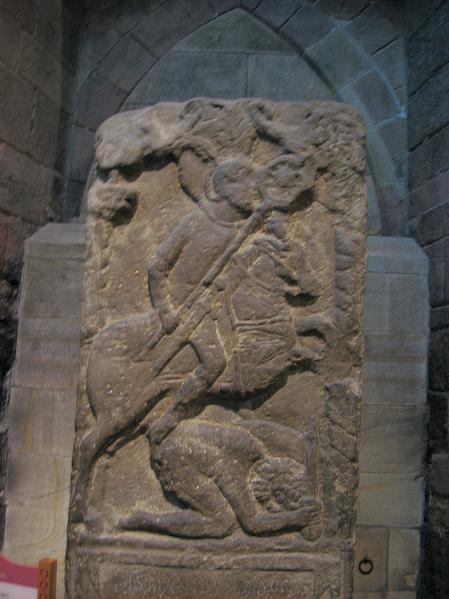 We learn from the inscription below the relief that the slab was erected for one Flavinus, signifer in Candidus' troop of the Ala Petriana. He died age 25, after seven years of service.

A signifer is the standard bearer of a cavalry ala (like the aquilifer is for a legion), and an ala is a horse troop of usually 500 men. The Ala Petriana was recruited in Gaul and took its name from its first commander, Titus Pomponius Petra. It was stationed in Corstopitum since 79 AD and some time after 98 AD moved to Uxelodunum (Stanwix near Carlisle). It had then become an ala milliaria of about 1000 men who were awarded Roman citizenship; but that happened after Flavinus' death.

Flavinus is nickname, probably because his original Gaulish one was unpronouncable, but he was no citizen, or he would have used all three names on the monument. It's derived from flavus = blond, fairhaired; a nickname by which Arminius' brother Flavus who remained in Roman service, is known as well.

Our Flavinus wears a torque which marks him as man of some standing in his tribe. As signifer, he had an elevated position in his troop as well, and added responsibilities like the charge of the regimental funds including the burial fund that paid for his memorial stone. 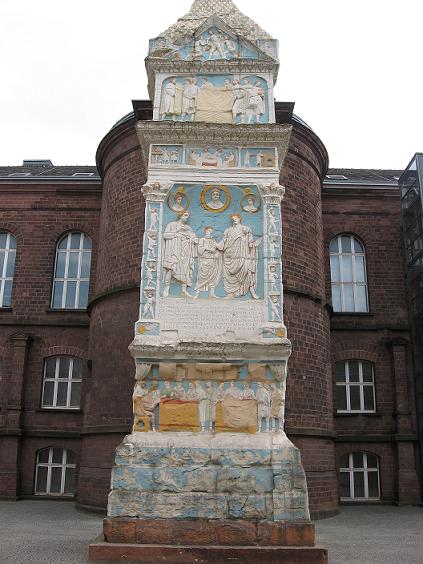 A victorious rider trampling a fallen enemy underfoot is a common motive on such stones; the naked foe is no example of the actual look of local tribal warriors. We don't know if Flavinus fell in action though he might have taken part in Agricola's campaigns.

The memorial stone would not have stood inside the fort or the settlement, of course. There were gaveyards outside the settlements. A large one has been found in a valley near Augusta Treverorum (Trier), for example. Some of the slabs from that place are now in the Rheinisches Landesmuseum, like this magnificient one.

It has been repainted using traces of the old colours still to be found on the monument. In Roman times, all memory stones (and buildings, for that matter) were painted, also Flavinus stone, though we don't know which colours were used on that one. I bet it was red for the plumes on his helmet and gold or silver for the face mask he is wearing beneath the helmet. 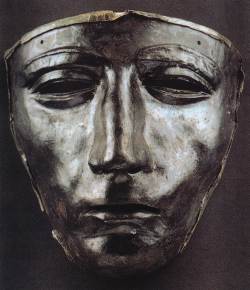 Face masks were part of the parade uniform for the cavalry. It's not sure whether they were also used in battle. I've seen the Kalkriese one and was surprised how tiny it is - it would fit a teenage boy these days. The Romans on average were smaller than people today.

One may wonder why the men who built Wilfrid's church bothered with such a big stone, it's too unwieldy to be carried several miles just to be used in some wall; after all, it stands 2.64 metres. Since Roman stones with inscriptions have been used in walls, the Latin words might not have meant much to the Saxons involved in the building. It's an assumption, but maybe they took the relief for a variant of St. George and the dragon - a human enemy as symbol for the beast. Or the grotesque face of the naked man looked like the devil to those early Christians. We'll probably never know.

Somehow, Flavinus' stone made it into the 12th century priory, because it was found in the foundations of the east range of the cloister during an excavation in 1881, and is since then displayed in the south transept.

Comments:
Do we know what the stone was used for when it was first brought to the site? It's possible the carvings had some significance, or it may have just been used as a nice big stone with no reference to the carvings. If you needed a big stone, e.g. for the threshold of a doorway or a lintel or a footing for a main load-bearing beam or column, it would probably have been easier to fetch one ready cut from a few miles distant than to quarry one.

I think your St.George-dragon theory has considerable merit.
Certainly a similar triumphant motif was used on many medieval coins.

So were the fask masks actual representations of the person's face, or a stylized version of some stranger? Mass produced or individualized? What was the purpose of hiding your face? *g* Yes, I'm full of questions today. Fascinating stuff.

Carla,
we don't know. Since the relief is still pretty well visible, I don't think they used it as threshold or any other place where it would have been damaged. They may have got other big stones for that; I'm sure a Roman fort and village rendered plenty of them in all sizes. :)

Bernita,
I wonder what delving into local legends might bring to light. It's a pity the different academic departments still work for themselves most of the time.

Constance,
it's difficult to say because not so many have come down to us. There are differences, but one can't say for sure they were indeed modeled after certain faces. The purpose was to look more splendid, or more threatening, though personally I think the vision was too limited with the mask on for it to have been of much use in a battle. And the Roman helmet did protect part of the face already. I'll try to find out more.

Once again you've found some fascinating facts and mysteries to share with us. I love the picture, especially the one of Coria (where is this located- did you take the picture on your trip to see the wall?). Thanks for sharing.

Thank you, Ann.
Coria is Corbridge, near the Wall. It was one of the places that had a Roman garrison previous to the building of the Wall (Corstopitum Fort) and later developed a civilian settlement with Roman buildings.

Re your comment on the size of the Romans, I've seen pieces of armour that belonged to Philip of Macedon and other warriors of the time and they could fit a very slight youth of today, although I know from reading some history reports there were some very hardy, large Macedonians as well.

Just seen a TV trailer for an Arthurian movie called "The Last Legion" - one of the caracter wears a silver, similar, half-mask.
Interesting.

Wynn,
bone analysis have shown the Germans were larger on average than the Romans. They weren't that wrong about the blond giants. :)

Bernita,
I've heard about the movie but not yet seen a trailer. Looks like they got it right, though.

The tombstone of Flavinus has been for too long thought to have come from Corbridge.
However a very good friend of mine the late Raymond Selkirk who wrote the book "On the Trail of the Legions" considered that the Flavinus tombstone is at its own home and was not brought from Corbridge at all.
In fact there is no Archaeological evidence that the Ala Petriana was ever stationed at Corbridge, for there is thought to be a much larger Roman fort beneath Hexham Abbey.
In fact the book Ala 2 by John Spaul does show that all the evidence for the Ala Petriana does indeed come from Hexham and not Corbridge.
I might suggest that a read of Raymond Selkirk's book "On the Trail of the Legions" might help people to better understand more about just where Flavinus was stationed.

Having seen the tombstone in Hexham I was grateful for your comments and explanation which made my visit more enjoyable. Thank you.