20 Aug 2007
Saalburg, Main Gate
I've given you some information about the history of the reconstructed Saalburg fort in this post. Today we'll have a closer look at the main gate, the porta praetoria. It was reached by a bridge (not a drawbridge) crossing the inner ditch surrounding the fort. The outer ditch was interrupted in front of the gate.

The statue of the Emperor would not have stood in front of the gate in Roman times, but in the yard of the principia. 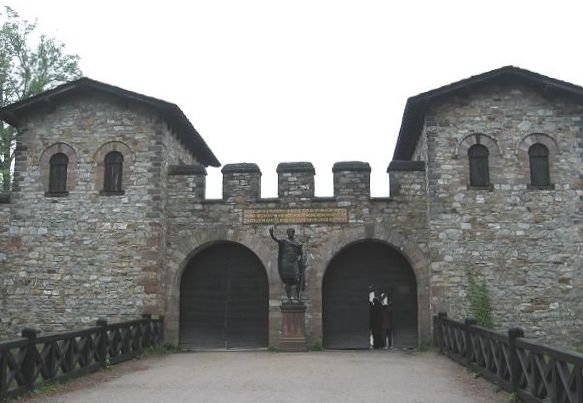 Porta praetoria, seen from the outside

It looks quite impressing and it was supposed to impress the Germans who might cross into the agri decumantes to trade with the Romans. If you look closely at the right wing, you can see the lower part is open and people are passing through - to give you a size comparison.

The windows are closed by shutters in a way that the defenders were protected even if they opened the shutters to shoot arrows at attackers. In the model below, the shutters are open. 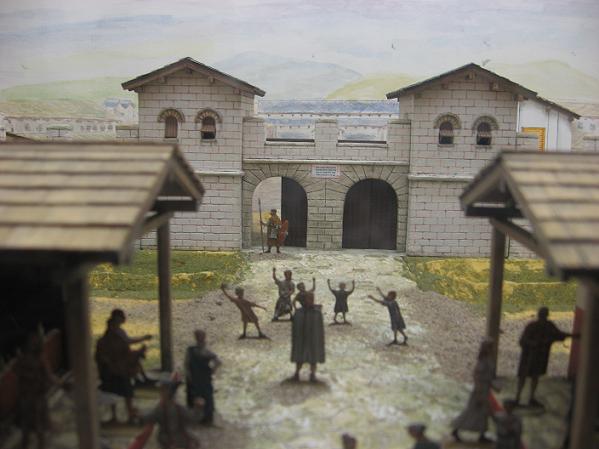 A model of the Saalburg displayed in the museum. It represents the original look of the gate.
(The foreground is a bit blurred because I had to shoot through the glass of the vitrine)
On a rainy day you can't blame the Romans' love for white walls; it would make the place look a bit more cheerful. 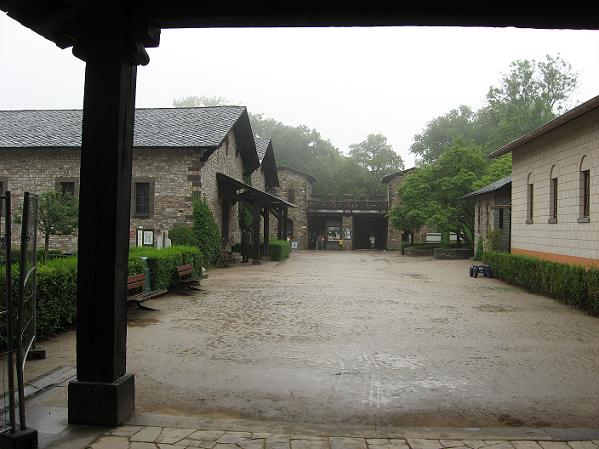 Another view from the principia along the via praetoria
This view shows the inside from a wider angle. To the left are the two granaries (the museum), to the right the commander's house (praetorium). It is a later addition and therefore has the correctly painted walls. It houses rooms for the staff working in the museum today. I'm pretty sure the original granaries didn't have such large windows, but I suppose some concessions to the modern use had to be made.  ¶ August 20, 2007

Comments:
I've been to the Saalburg and the Edersee, but I've got to say, I always learn something new when I read your take on things. It's especially interesting to learn more about the Saalburg from someone in the know! ;) So thanks for your efforts. Very much appreciated - even by someone who's "seen it all". :)

Yeah, I can see why they painted the walls white, although I like the unpainted look as well. Great pictures (the lake pictures as well *g*), and thanks for the guided tour. :)

These are neat, Gabriele, and just what I need for a scene I'm writing. Thanks!

I wish I lived somewhere where the history was older than 1785...

Thank you, Jeri. There will be more about the Saalburg in the future. And I still have tons of Hadrian's Wall pics in the files. :)

Thanks Ann, you're welcome.

Constance, it's so much fun to live in Europe if you're a history geek. What is strange is that I've not yet taken pics of my hometown - not that we have famous remains, but some pretty ones.

When I lived in Italy I always took more pictures of where we went than where we were staying. Maybe it has to do with the thought that home will always be there. :)

I love unpainted stone, but yes, white would have been cheerful and looked cleaner.

Solid.
Interesting two-lane construction to the gates.
I wonder if the white-wash also had a defensive purpose, in that it would be reflective/squinty, though only by day, of course.
At one time, stucco was applied to stone and brick building in N.A. as an insulator.

I think so, Constance.

December, I like the unpainted ones, too. It's just that white would have given an even more authentic feel. But the mere size of the whole fort is impressing - some foundations don't give you that.

Bernita, the while colour surely would have been seen far. It's debated whether the Hadrian's Wall was painted - I think it would have looked splendid.
The two lane construction is so typical that even the wooden forts of the first stage had it. The gaps in the earthen walls at Hedemünden point to two lane gates as well.

I really can’t see from the photo’s. Does each of the portals in the have usual inner and outer gates.

Yes Hank, they have. And hiding between them is the counter where you pay the entrance fee. :)

Hi Gabriele,
Just catching up on blogs!
What a great fort. I would love to visit it. Love the wall - and everything looks so modern!!
Horrible weather this summer, eh?

Sam, it's near Frankfurt and there's an Eurocity from Paris to Frankfurt. :)