22 Aug 2007
Saalburg, Walls
Here are some more shots of the Saalburg walls, taken while I walked around the fort to get a feel for the size. That is, splashing through mud and wet grass, working the camera with one hand and holding an umbrella with the other. Varus Battle weather indeed. 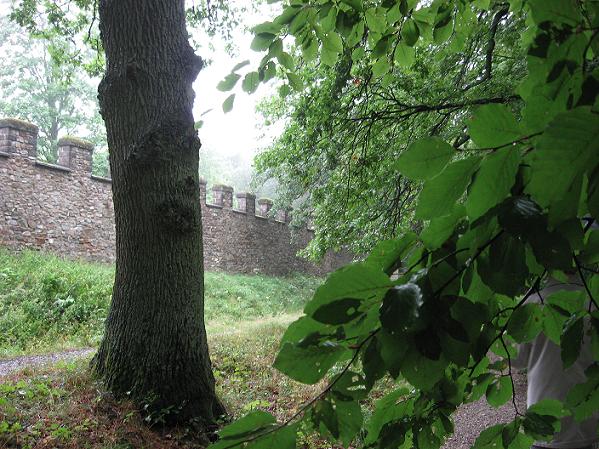 The shots throught the trees and foliage look romantic, but of course, in Roman times trees would not have allowed to grow so close to the fort and give some sneaky Germans the chance of cover. There are different estimations how large the cleared areas were and it might have differed in different countries, but a minimum of bowshot distance can be assumed. 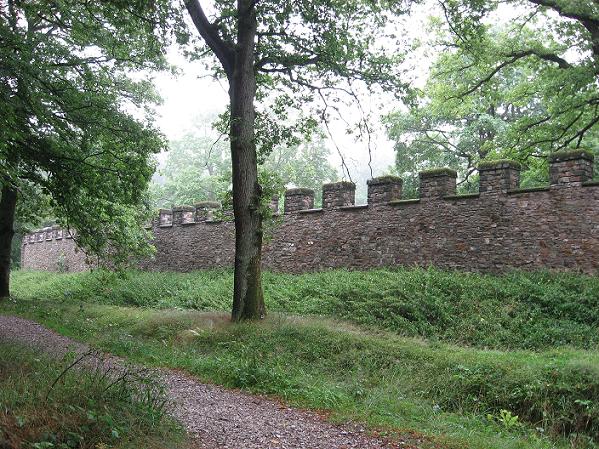 I bet after walking a day with full equipment through bad weather, Roman soldiers would have been very glad to see those walls. Probably after sweating under a hot German summer sun as well. :)

Comments:
I love these pictures the area is so beautiful and the wall looks amazing!

That is the one advantage of a rainy day, the place looks peaceful. On sunny days it's swarming with tourists - which would be less bad if only they were dressed as Romans. :)

Those are some gorgeous photos.

I want to go there!

December, Germany is worth a journey, for sure. :)

Great photos, and very informative as always. How far was a bowshot in those days? It wouldn't have been as far as the medieval longbow could manage, would it?

Good question. The standard bow would give you any semblance of accuracy and effect for about 150 metres, but special bows like the Syrian composite recurve had a larger range. I'm sure the Romans cut off enough trees to be on the safe side, lol, and on terrain where manoeuvering was possible, I would guess they cleared a space sufficient to deploy several cohorts in proper formation.

Another thing to hunt down, but since I have Syrian archers in one of my novels, I better find out. A sling worked as far as 90 metres which is more than I had thought before Gisco demanded enough space in A Land Unconquered to research his weapon.

Nothing quite says home like a great whoppin' wall and guards bristling with weaponry.

Great photos, I'm glad their accuraccy doesn't extend as far as the greenery *g*. I'm thinking I need to add Germany to my list of places to visit.

Lol Constance, I bet there were days for the Romans when that was true.

Ann, yes, Germany is worth a visit. And no, I don't get paid by the Tourist Association. :)

Thank you, Debra. It helps me to see the places I write about, and I like photographing, so it's fun to share. :)

I haven't had a chance to visit much this week but I just love the photos in your posts. Although you do seem to strike a lot of rain ;)

Have a great weekend!

It's difficult to miss the rain this summer. :) But I got a few sunny days and sunny pics as well.

I live about 20 minutes drive from there, you really captured the Saalburg on one of its most beutiful days, at times I have spend anything up to 2 days in the woods around there without returning home, and the Taunus does have its own magic in fog and rain. I remeber I once made a forced march from Saalburg to the Feldberg Castel (about 12 miles i'd guess) in knee deep snow, and another time the same march with a 15 kilo pack, believe me those Romans where tough, they had to do up to 40 miles a day with 30 kilo packs.

To give others an idea of range, experiments have found that if you stand at the edge of the ditches you be in range for people on the wall to throw rocks at you. To bad you didn't get any pictures of the interior...