19 Aug 2007
A Summer Day at the Edersee Reservoir
The Edersee is a large reservoir west of Kassel. It was constructed 1908-1914 by erecting a dam of rock and concrete across the Eder valley. For those of you liking numbers, the dam is 47 metres high and 270 metres long at the bottom, 400 on top. The width is 36 metres on bottom and 6 on top.

The Edersee is 27 kilometres long, winding through the former valley, and up to 42 metres deep. If the lake is full, it holds 199.5 million m³ water. 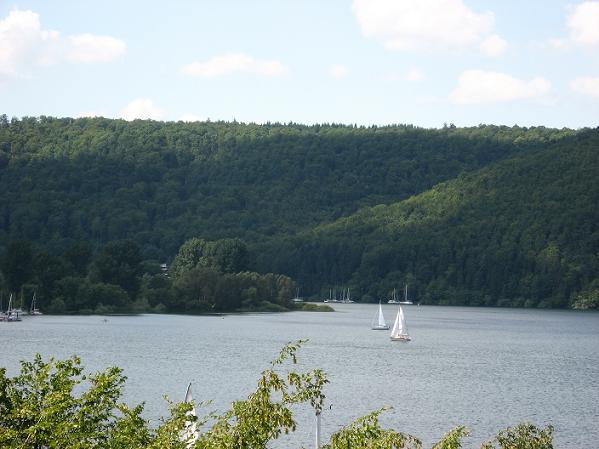 View over the lake from the balcony of our friends' house

It was full to the brim when we were there. Just the day before, the overflow gates in the dam had been opened to let surplus water out. Too bad those Niagara falls were gone after a day and we missed them this time. I have seen the spectacle several times in spring, but it's 50 years since it last happened in August.

The main purpose of the Edersee reservoir is the regulation of shipping levels for the Weser river, and the generation of hydropower. Thus, in dry summers water has to be let out and one can see the remains of the three submerged villages in the valley that had to be abandoned for the reservoir. There is still an old bridge crossing the Eder, remains of a church, and a cemetary. People go there and visit the graves of their ancestors in times the ground falls dry. I have experienced such summers as well. 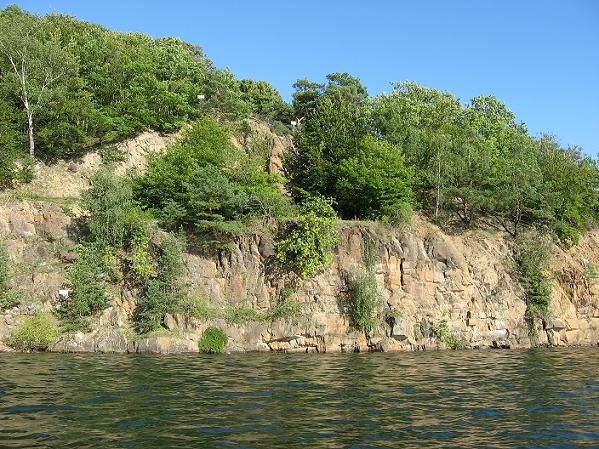 Rocky shore on the Scheidt peninsula
The most tragic event in the history of the lake happened May 17, 1943, when planes of the British Royal Airforce bombarded the dam and ripped a 70 metres wide and 20 metres deep hole into it. Within short time some 160 million m³ water thundered into the Eder valley, destroying houses, bridges and arable land. I found three different numbers of people killed on different websites, but it must have been at least 50. The dam was repaired immediately and the gap could be closed in four months, in time for the autumnal rains. 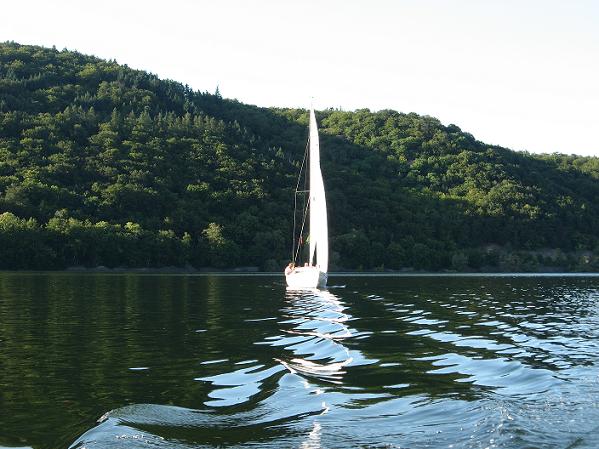 A peaceful afternoon on the lake
Another important purpose for the Edersee today is to provide a recreational area. The water is clean, so swimming is fun. There is fishing, sailing and electrical boats, hiking paths in the hills around the lake, a bicycle way, and several camping sites. People from places like Kassel, Korbach and other towns who can afford it, buy summer houses dotting the hills in some places - fortunately mostly hidden by trees. 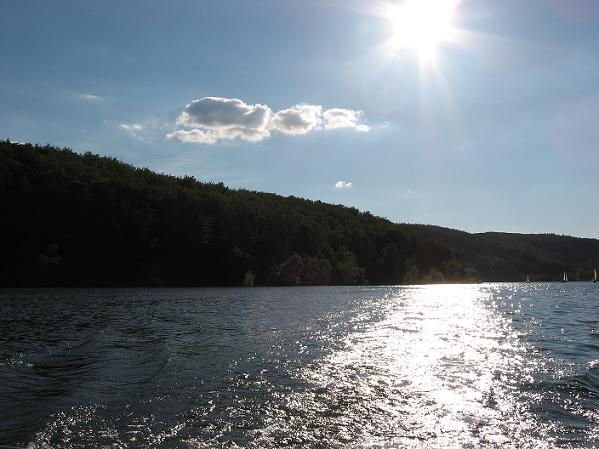 The water glittering in the sun
So, having friends with both a summer house and a boat is fun. :) 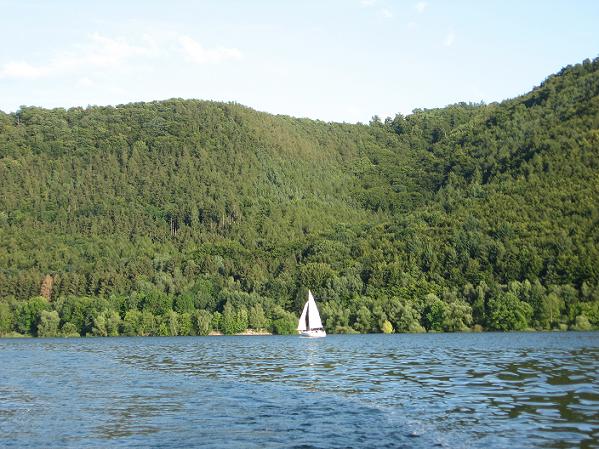 Mountains surrounding the lake
The picture below shows Schloss Waldeck (Waldeck Castle), a castle that first is mentioned in chartes in 1120 and was seat of the Counts of Waldeck until 1655, when they moved to the more modern palace in Arolsen. Afterwards, the castle served as garrison, then prison, and now houses a rather expensive hotel in its renovated walls. 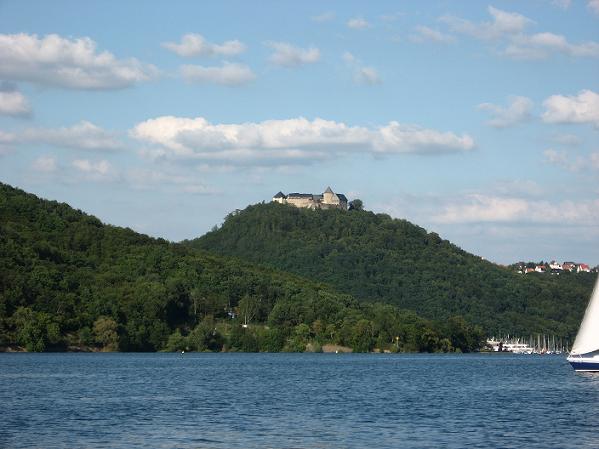 The mountain is less steep from the other side, so the castle can be reached by car. When the castle still was seat of the counts, the view did not include the lake, of course, but the even deeper Eder valley. And my German tribe of the Chatti lived around there as well, long before anyone put a castle up that mountain. :)  ¶ August 19, 2007

Comments:
Gee, the numbers wouldn't be directed at us engineer types, would they? *g*
Looks like a nice place to visit and reflect.

Ah, your last photo caught how light may turn water to molten silver. Exquisite.
Drowned villages are a plot bunny - but you knew that.

A bit warmer than Norvegian fjords, I suppose, Celede, but the water is cool this year compared to other summers. I like it that way.

Beautiful pictures. How I long for a view like that from my window.

Thanks Hank. It's one of my favourites, too.